I asked Matthew to keep us up to date on the big political crisis in Britain, where PM Boris Johnson has suspended Parliament—with the Queen’s assent, so much for you royal-lovers—so that Johnson can get the Brexit deal concluded in the absence of the legislature. Here’s Matthew’s report from today, with his words indented:

The Johnson coup –  for that is what it is – proceeds apace. Within 12 hours over 1 million people had signed a petition against the prorogation (suspension) of parliament; there were demonstrations in many cities last night and there will be again this weekend; and it is unclear what the next steps will be. The Queen has signed the order proroguing parliament and that is what will happen. After a few days of sitting next week, it will be suspended: both houses, all the committees, everything (this is very different from a normal recess).

The government and their apologists claim that there is nothing new about this, that it is merely a few days extra. This is a lie. This is not a recess, it is a prorogation. Everything stops. Nothing can be discussed. It is the longest suspension of parliament since 1945, at a time when parliament should be questioning government and holding it to account. Johnson —a generic coward and a liar— is evading his basic responsibilities

There is widespread condemnation of this. Here are some comments by those with whom I do not always agree – such as David Allen Green, a constitutional lawyer who voted Leave, a Tory MP, Sam Gimyah, and the Financial Times. 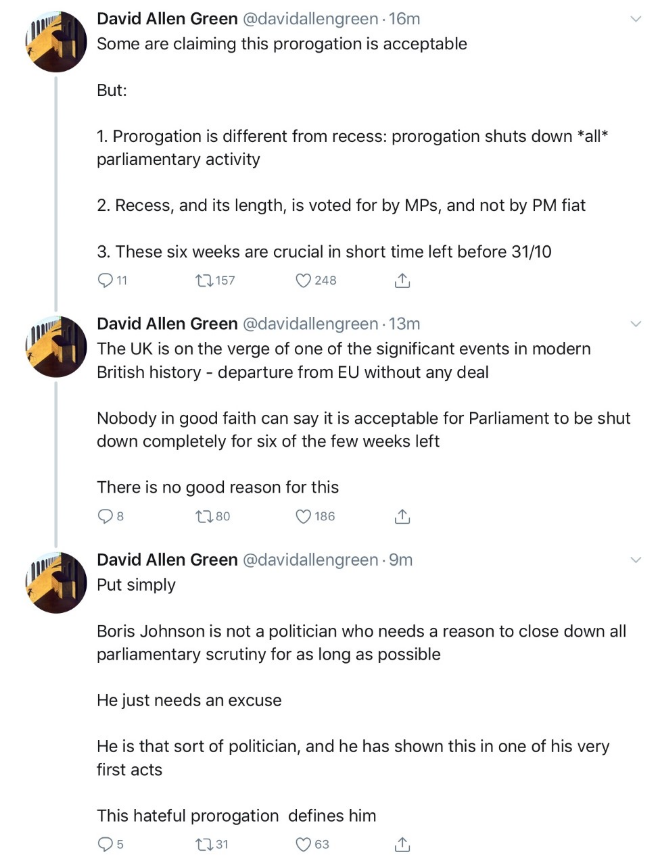 "If @jeremycorbyn did that many of my Conservative colleagues
would be accusing him of Trotskyite tactics"
On #BBCBreakfast Conservative MP @SamGyimah condemns Boris Johnson's move to suspend Parliament ⬇️#Brexit @BBCNaga pic.twitter.com/cVbAiYFou5

Here is an excerpt from the Financial Times’ editorial this morning:

And here is a view from someone I do normally agree with, the journalist (and my good friend) Paul Mason:

Some idea of how widespread the hostility is in the population can be seen here:

This is from a perfectly reasonable man who I know from Twitter where we chat about wildlife and cats and football. Until today. https://t.co/fAQyBEjRN5

Inevitably, people have also responded satirically, although in this case every word is true:

LONDON, England — Protesters took the streets outside the dilapidated legislature after the unelected Prime Minister requested the head of state — whose son has recently come under fire for alleged links to a criminal sex ring — to shut down the only elected chamber etc.

As to the future, I fear that Johnson will get his way, because the Tories who said they were opposed to such a procedure (a number of whom are now leading members of the government) will cave in because they are unprincipled, and there are a number of pro-Brexit Labour MPs who would abstain in any vote. More significantly, because of the nature of the UK parliament, it is hard to see how this can be stopped by parliament or the courts. The Queen decides when parliament sits, doing what the government (i.e., the PM) says. As far as I can tell, what happened yesterday was entirely legal.

This raises a more long-term issue, far beyond the feverish excitement of the current moment, or even the prospect of a catastrophic crashing out of Europe with no deal on 31 October. This crisis will undo the very foundations of the United Kingdom – Scotland (massively remain) will become independent (the popular, anti-Johnson leader of the Scottish Tories is about to step down for various reasons), while the impact of a hard border on the island of Ireland (this will be a consequence of No Deal, unless everyone is very smart) will drive Irish reunification. I predict both these will happen with the decade. A situation going back to 1707 (Act of Union with Scotland) and 1922 (creation of Northern Ireland) will have been ripped up by the Brexiteers.

Furthermore, the role of the monarch is now highlighted. This goes back to 1688 and the Glorious Revolution, which ended decades of upheaval and argument, including a civil war and regicide. The monarch is supposedly a figurehead, simply doing the government’s bidding. But note that the armed forces (the ultimate power in any country), swear allegiance to the crown, not parliament… It is often argued that the monarchy will act as a bulwark in the case of an anti-democratic government. We have seen that this is simply not true. The result is that the monarchy acts as a legally-untouchable guarantee of executive power. When people start thinking about this, then the basis of the UK’s unwritten constitution may also be questioned. In my view, these events show how dangerous and anti-democratic the monarchical system is.

There is now no apparent way of holding this government to account. That is a coup, in any language. Protests, demonstrations, marches will be necessary to defend parliament.

Here’s a timeline from the Guardian – it misses out various bits of jiggery pokery that might occur next week, but gives some idea of the amplitude of the crisis. 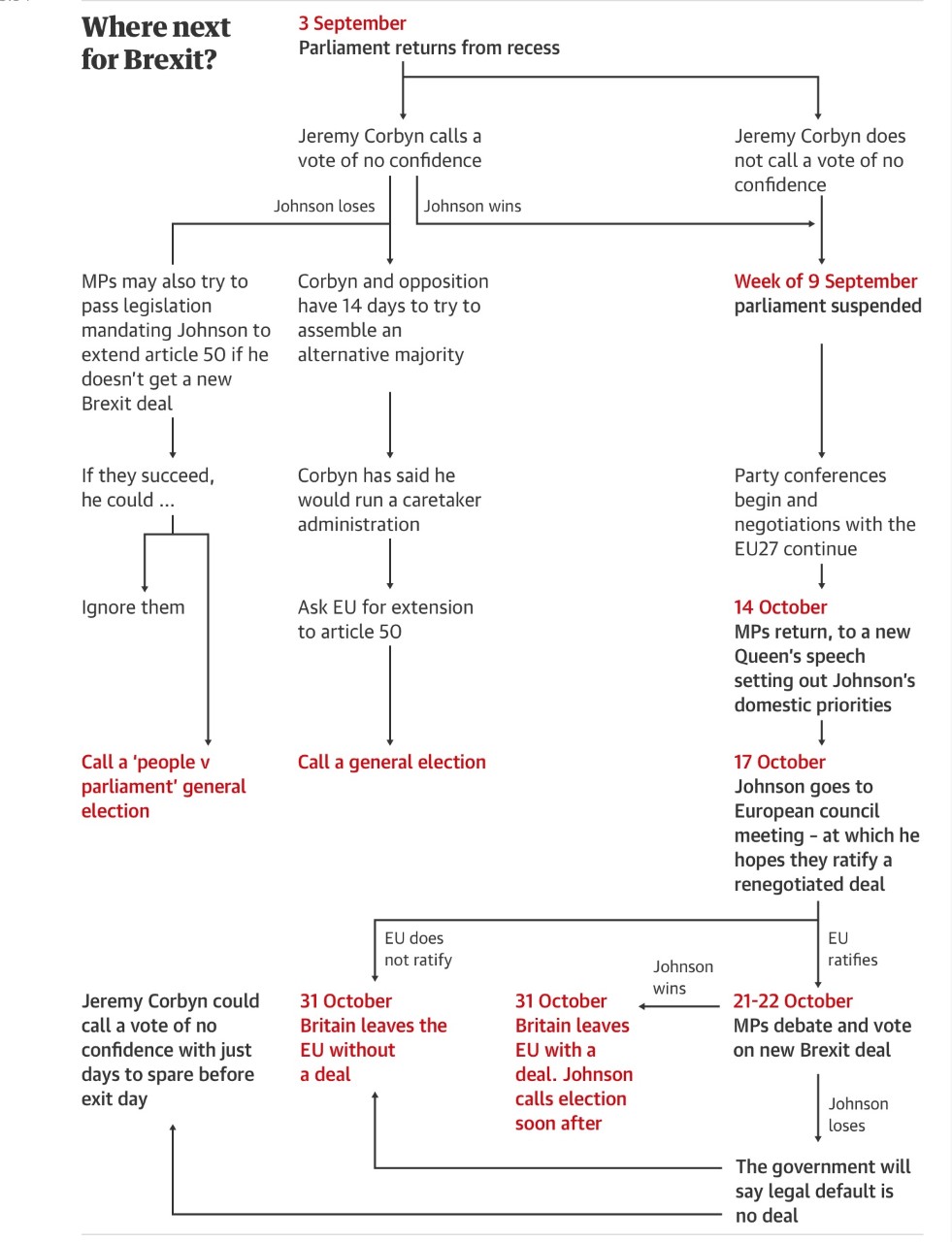 202 thoughts on “The constitutional crisis: Matthew Cobb’s report from Britain”