I have two letters that I’ve combined into one post, both showing the progress in women’s rights since I was an adolescent. I hope they are heartening in showing that sexist attitudes prevalent when I was a boy have substantially eroded. Neither of the letters below (stemming from Richard Byrd and J. Edgar Hoover) would be considered acceptable today.

The first comes from reader Jane Phillips, who sent me a screenshot of a letter she wrote to the New York Times about Admiral Richard Byrd. As Jane told me, she’d dreamed of being on an expedition in the Antarctic, envisioning guiding sleds drawn by hardy dogs. She sent me the note below as well as her 1990 letter to the New York Times, which includes the dismissive response of one of Byrd’s flunkeys to her dreams of being an Antarctic explorer.

When you go to Antarctica, I hope you will think of me because of this: a response to my letter to Admiral Byrd  volunteering to go on an Antarctica expedition:

Jane’s letter to the NYT: 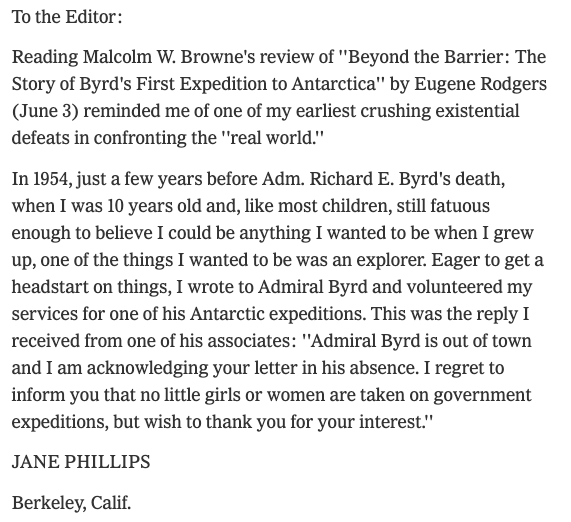 A version of this article appears in print on July 8, 1990, Section 7, Page 30 of the National edition with the headline: No Women Allowed.

How snotty can you get? Well, consider J. Edgar Hoover’s reply to my old friend Betsy, who, in 1963 at age 14, wrote to the FBI asking how she could become an FBI agent. J. Edgar Hoover, the Director, answered her personally. 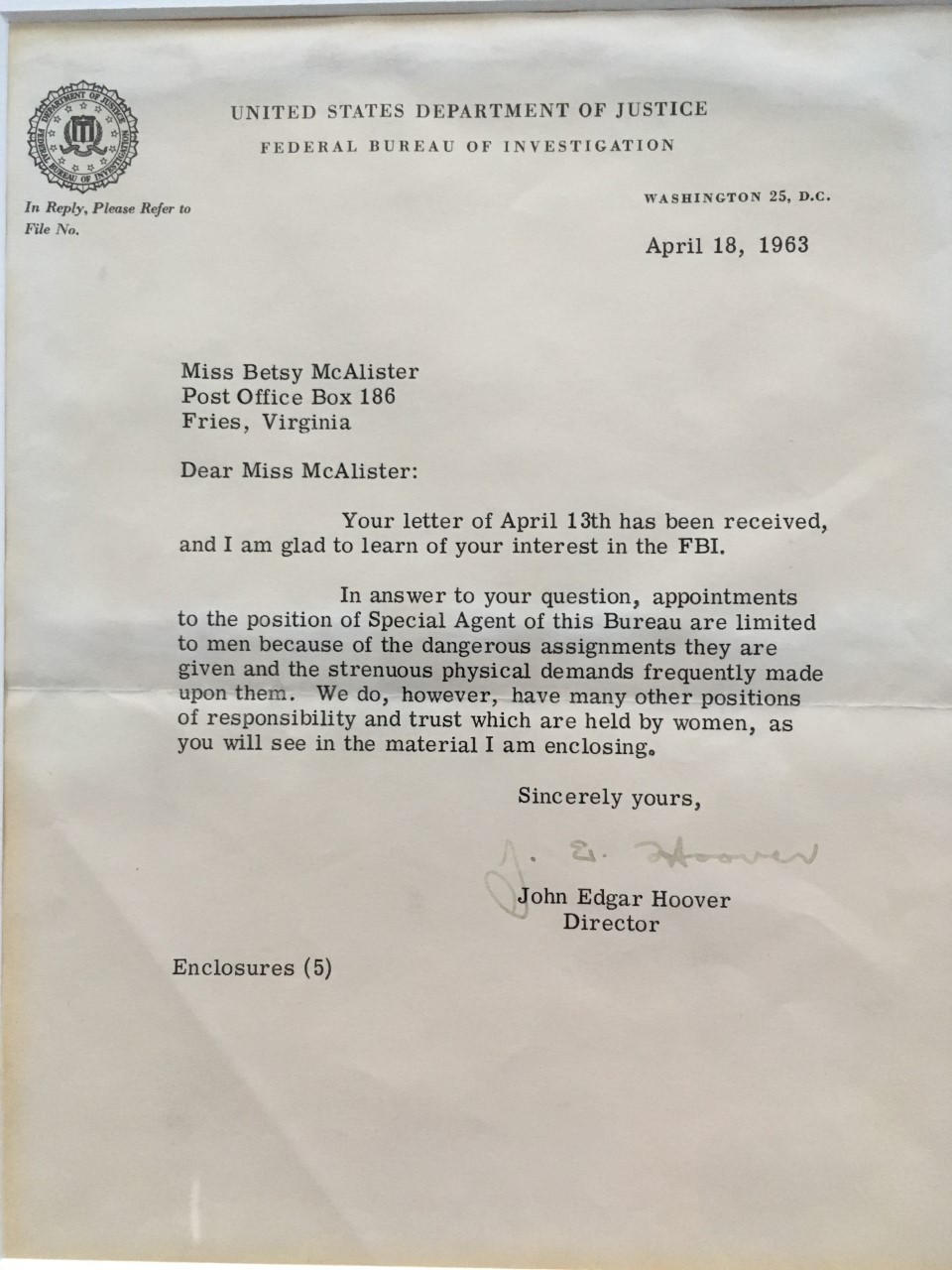 As Betsy notes, “There were 5 enclosures; I can remember only 3: secretary, stenographer, and lab technician. The enclosures themselves have long ago vanished… too bad.”

Well I’m happy to report that although there isn’t 50/50 gender parity in the FBI, as of 7 years ago 20% of FBI agents were women (this could in part reflect a difference in preference rather than pure bias, though there are still reports of anti-woman bias in the agency). But at least the “glass ceiling” is gone—as is the odious Hoover.

I don’t know the proportion of researchers in the Antarctic that are women, but from reading about the stations there I gather the proportion is substantial. The “Women in Antarctica” article on Wikipedia says this:

There were approximately 180 women in Antarctica in the 1990-1991 season.  Women from several different countries were regularly members of over-wintering teams by 1992. The first all-women expedition reached the South Pole in 1993.  Diana Patterson, the first female station leader on Antarctica, saw a change happening in 1995. She felt that many of the sexist views of the past had given way so that women were judged not by the fact that they were women, but “by how well you did your job.”

Social scientist, Robin Burns, studied the social structures of Antarctica in the 1995-1996 season. She found that while many earlier women struggled, in 1995, there was more acceptance of women in Antarctica. Also by the mid 1990s, one of the station managers, Ann Peoples, felt that a tipping point had been reached and women on Antarctica became more normalized. There were still men in Antarctica who were not afraid to voice their opinion that women should not “be on the ice,” but many others enjoyed having “women as colleagues and friends.” Women around this time began to feel like it was “taken for granted now that women go to the Antarctic.”

Studies done in the early 2000s showed that women’s inclusion in Antarctic groups were beneficial overall. In the early 2000s, Robin Burns has found that female scientists who enjoyed their experience in Antarctica were ones who were able to finish their scientific work, to see through the project into completion.

I trust that equal opportunity will continue and increase, so that there are no more sex-based barriers to getting either of these jobs—or any job.  While residual bias may remain, at least women are no longer patronizingly told that, on the basis of sex alone, they aren’t qualified to be FBI agents or Antarctic explorers and researchers.

95 thoughts on “Progress in women’s equality”