Over at a Gallup poll site, you can see the headline below reporting the newest iteration of Gallup’s sporadic—now yearly or biennially—survey of American belief in creationism. (It’s really belief in human evolution, so be aware that there are many who think that while other species evolved à la Darwin, humans alone required divine intervention. Do remember that Tennessee’s Butler Act, whose violation led to the trial of John Scopes in 1925, forbad the teaching of human evolution, not evolution in general. )

That headline seems scary, no? In fact, if you read here regularly, this is pretty close to long-term estimates of Biblical young-earth creationists gathered by Gallup since 1982 (the percentage has varied between a low of 38% two years ago and a high 47% in 1993). Here are the data taken since the first survey in 1982. 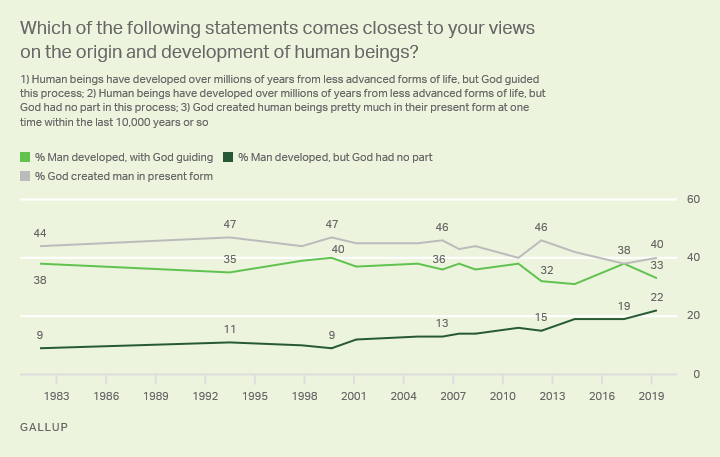 But in fact the headline is a big underestimate. In fact, 73% of Americans believe in creationism—if you count those who think that God guided an evolutionary process leading to the evolution of humans “over millions of years from less advanced forms of life”.  If God is guiding the process, then there has to be some divine, teleological intervention in evolution, just as Intelligent Design advocates propose. This could happen in several ways. God could, as Michael Behe apparently believes, create the right mutations at the right time, circumventing the naturalistic “random” mutations that most biologists accept but that, says Behe, can’t produce complex adaptations. Or there could be differential reproduction or extinction mandated by some undetected interventions of God. Maybe God tweaked the reproductive potential of those members of Homo who had bigger brains.

So the proportion of Americans who accept some divine hand in evolution is really 73%, and what is divine intervention except a form of creationism? Granted, it works hand in hand with evolution, but it’s a non-naturalistic theory. Thus, by saying that the figures are 40%, Gallup is underestimating the real figure by 45%.  On average, only 22% of Americans—a bit more than one in five—accept a purely naturalistic view of human evolution.

Although Gallup says that the figures for creationists and theistic evolutionists have held pretty steady, the long term-trend is really down a bit (their sum was 82% in 1982 and is now 73%).

One trend that is evident is the slow but ineluctable rise of naturalistic evolutionists, which has more than doubled (9%-22%) over the last 37 years. I’m betting this isn’t a statistical fluke, but a real increase of American acceptance of evolution.

Why is this happening? My theory, which is mine (but also other people’s), doesn’t require any perspicacity: it’s almost surely due to the increasing secularization of America. “Nones”—those who aren’t affiliated with a church—are now nearly a quarter of the American population, and about a third of young people. Granted, many of those are still deists, or even theists, and many are spiritual, but there’s no doubt that the unaffiliated are more willing to accept naturalistic evolution. If you don’t believe in a theistic God, then what reason do you have to oppose evolution?

You can see that in the demographic, educational, and religious breakdown given by Gallup:

These are the usual results: the lower the index of a person’s religiosity, the more likely they are to accept evolution. Young-earth creationism is higher among Protestants than Catholics (though more of the latter accept theistic evolution), and the “nones” are rife with evolutionists: 59% of them accept unguided, naturalistic evolution.

Do note that although the Catholic Church officially accepts evolution, 34% of them remain young-earth creationists, bucking their church’s dogma, while only 18% of them are naturalistic evolutionists. (The Church does broach some supernatural views of evolution, including the important tenet that all living humans are the lineal descendants of one pair of people: Adam and Eve.)

The upshot? Creationism—both young-earth and “goddy interventionist” forms—is still the dominant American view of how humans came to be. But, slowly and surely, those who accept evolution in the same way scientists accept it are growing. Why, in 80 years, if the trend continues, nearly half of Americans will accept evolution! None of us will be around to see that, and our species might not even be around. But at least Americans are growing saner.

I’d love for some reporter to ask Trump, as well as the Democratic candidates for President, if they accept naturalistic evolution. I don’t think anyone has ever asked Trump about that.

Here, for those interested in such things, are the methods Gallup used to get these figures. And remember again that the data are about human evolution. If you left out humans in the questions, you’d see a lot fewer creationists, at least of the young-earth, Biblical type. 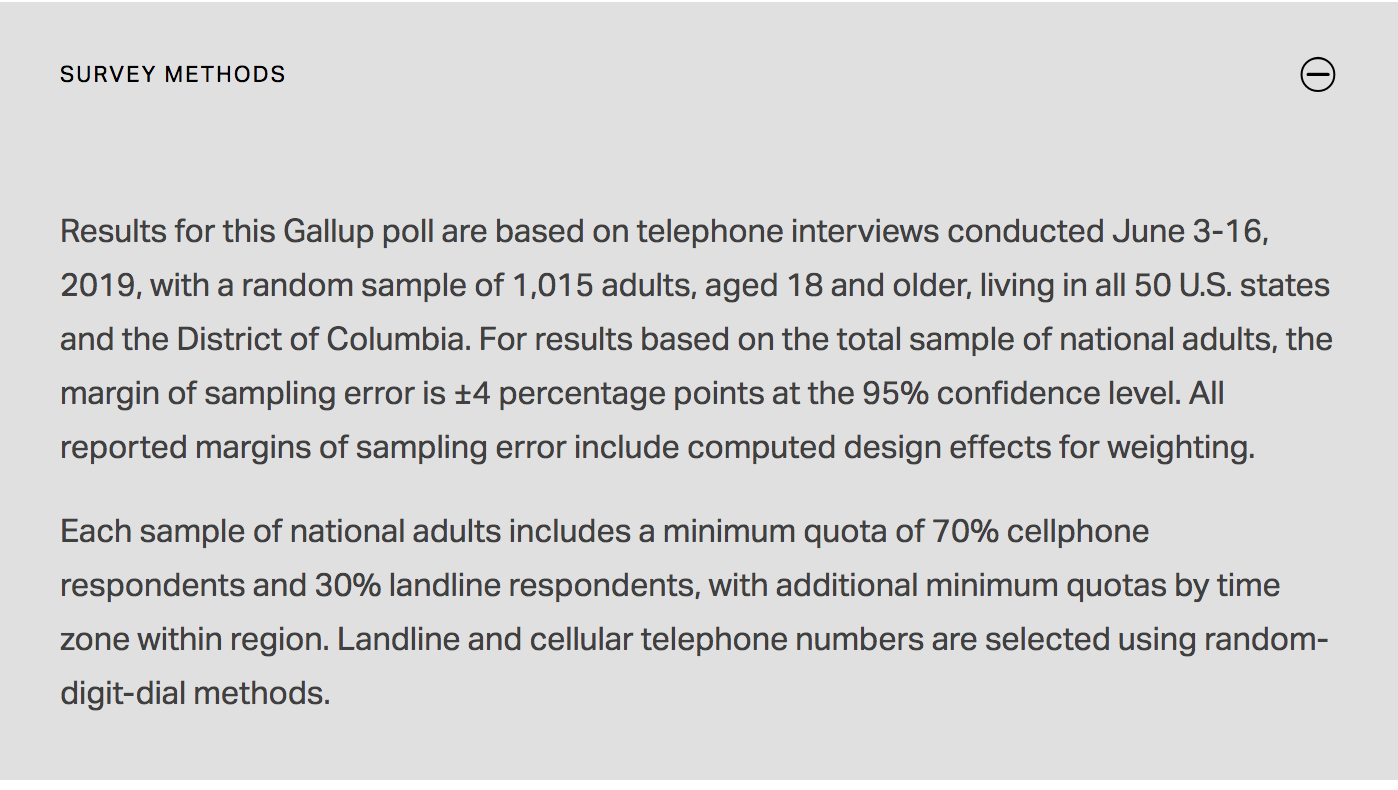