And the federal government hasn’t executed anyone since 2003. Remember that the federal death penalty differs from state death penalties: the former is limited to a narrower range of crimes and is used much less frequently. While 60 inmates are on death row in federal prisons (most in Terre Haute, Indiana), only three have been executed after the federal penalty was reinstated in 1988 (see below). Now, thanks to Trump’s attorney general, they’re set to kill five more. Here are the three executed in the last 31 years.

a. Timothy McVeigh,  executed 2001 for the Oklahoma City bombing that killed 168 people.
b. Juan Raul Garza, Latino male, executed 2001. Garza, a marijuana distributor, was convicted and sentenced to death in August 1993, in Texas for the murders of three other drug traffickers.
c. Louis Jones, executed on March 18, 2003 for the kidnap and murder of a young female soldier.

According to many sources, including the Springfield News-Sun and Reuters, the Trump administration has just now re-started these executions.  From the former source:

For the first time in over sixteen years, the federal government will resume using the death penalty, as Attorney General William Barr on Thursday announced that five federal inmates would be put to death for their crimes, with the first execution scheduled for December 9, 2019.

“Congress has expressly authorized the death penalty through legislation adopted by the people’s representatives in both houses of Congress and signed by the President,” Barr said in a written statement released by the Justice Department.

Five execution dates were announced by Barr for five inmates convicted of murder, starting with Daniel Lewis Lee, a member of a white supremacist group, who murdered a family of three in Arkansas, and was found guilty in May of 1999.

“The Justice Department upholds the rule of law—and we owe it to the victims and their families to carry forward the sentence imposed by our justice system,” Barr added.

Of course they didn’t have to do this; it’s up to Barr whether these people get executed or not—and when.  I of course favor punishments, and very stringent ones for murder and other horrific crimes. But I don’t favor capital punishment for the reasons I gave above. It’s purely vindictive and offers neither rehabilitation nor deterrence nor rectification of false convictions. I see no reason save vindictiveness to kill someone rather than letting them stay in prison for either life or for a very long time.

Here’s where we stand relative to other nations in our use of government executions. The red ones are the bad ones, and we’re red: 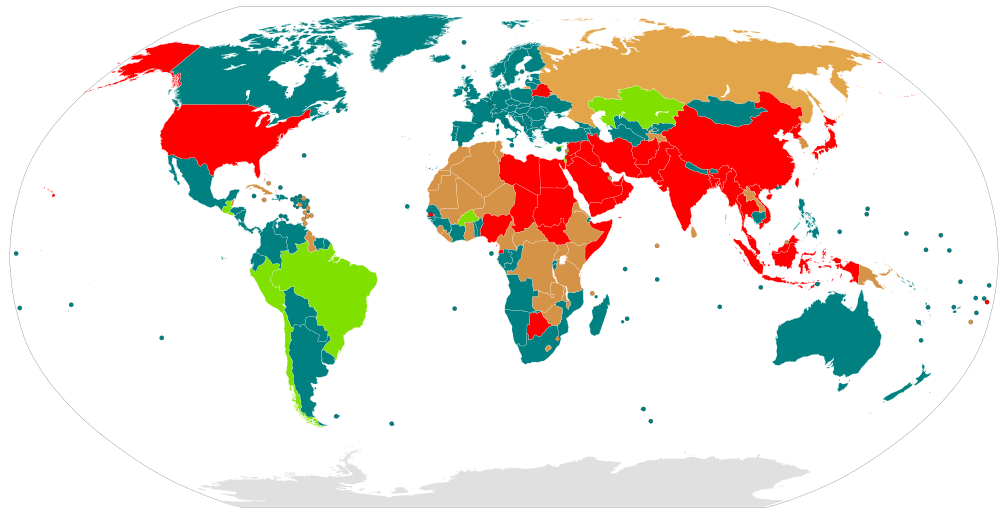 This recent decision bespeaks a lack of humanity, of empathy, and of a failure to realize that criminals had no choice about what they did.

180 thoughts on “More horror from the Trump administration: federal government to resume executions after a sixteen-year hiatus”