In 1958 Matt Meselson, whom I knew slightly at Harvard (he was a terrific guy), performed, along with Frank Stahl, an experiment that John Cairns called “the most beautiful experiment in biology”. What he and Stahl did (see description here) was to use density-labeled components of DNA to choose among which of the three methods of DNA replication floated at the time was correct (people didn’t know how DNA replicated in 1958; this experiment settled the issue): 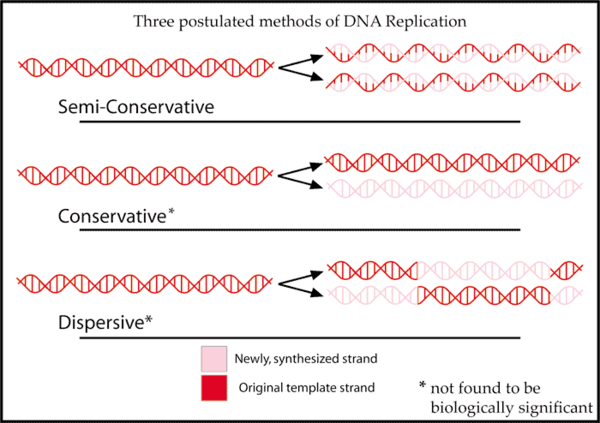 In “semi-conservative replication”, each strand of DNA unwinds and makes a copy of itself, so that each DNA helix in the next generation of DNA has both a parental strand and a new strand synthesized from nucleotides and sugars. “Conservative” replication involves each double strand making another whole double strand.  “Dispersive” replication involved the DNA breaking, with each break synthesizing new DNA, matched to the other strand, in bits. They’re portrayed above.

Meselson and Stahl’s genius was to use an in vivo replication in E. coli producing DNA strands labeled with heavy isotopes (15N) that, while chemically identical to non-radioactive nucleotides, would be distinguishable from the non-labeled strands because the former were heavier and could be separated by vigorous centrifugation. (They used labeled nucleic acids as the components of the original strands; those labeled nucleotides were themselves synthesized by growing the starting bacteria for a few generations on “heavy” ammonium chloride—the only source of nitrogen—a component of nucleic acids—in the bacterial medium.)

The beauty of the experiment is that the results—confirming semi-conservative replication—were visible in a single photograph (below), and were unambiguous. It was a lovely experiment, and I think deserved a Nobel Prize (sadly, one wasn’t given for this).

This nice 13-minute talk by Matt, taken from an iBiology talk website, describes this experiment. He and Stahl started by putting bacteria containing fully “heavy” DNA into medium with non-heavy ammonium chloride, so that all the new DNA synthesized would be light.

Under the semi-conservative hypothesis, the next generation of DNA would be “half heavy”, as each helix would have both an original heavy and new light strand, with the latter containing nucleic acids synthesized from the lighter nitrogen in the medium.

Under the conservative hypothesis, the next generation of DNA would consist of fully light double strands and fully non-heavy original double strands. There would only be two types of strands detectable, and those would stay, with the heavier ones eventually disappearing as their carriers died and new DNA was formed. And under the “dispersive” hypothesis, the next generation of DNA would be not fully heavy or not fully light, but a schmear of ‘partly-heavy helices”. You’d get a mess of mosaic strands in subsequent generations.

Well, listen to Matt describe this pathbreaking experiment below. I’ll give a link to their paper and the famous figure that convinced everyone below the video.

When the bacteria were put on non-labeled medium, and the tubes scanned with UV-absorption, which picks out the DNA, you see that in the first generation all the DNA is heavy (original bacterial DNA). As those bacteria replicate and form new DNA strands, the heavy helices begin to wane and we start to see half-heavy helices (lighter stripe forming in the left, lighter part of the gradient). This stripe gets darker after more “hybrid molecules” accumulate (generation time is shown on the right of the figure). After one generation of replication, you get hybrid strands which are lighter than the original ones (the bands show the position in the density gradient of the centrifuge). Then, after another generation, the hybrid stands themselves replicate, forming a double-light helix from the newly synthesized strand as well as the half-heavy strand containing the original heavy strand of DNA. By generation four, nearly all the helices are fully light (to the left), as the original strands are in a minority in the mix since their carriers have died or been outbred. In other words, the three bands predicted by the semi-conservative hypothesis were seen. The experiment ends three photos from the bottom, at generation 4.1.

The presence of the three well-demarcated strands forming in sequential order shows unambiguously that the semi-conservative model of DNA replication is correct. You don’t need statistics to get the answer here! 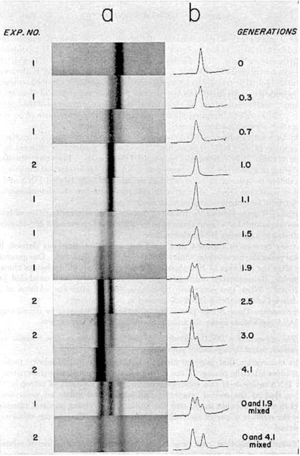 You can download the original paper by clicking on the screenshot:

I don’t know of a more beautiful—or unambiguous—experiment in modern molecular biology. And the stuff about Meselson and Stahl being locked in a room with food and a sleeping bag until they wrote that paper happens to be true. (For more, read The Eighth Day of Creation by Horace Freeland Judson).