My theory, which is not just mine but is shared by several sociologists, is that the Western world is becoming increasingly secular in tandem with an increase in the West’s well being. (The latter is, of course, documented in Steve Pinker’s last two books.) As people can rely more on their governments and societies to give them jobs, food, medical care, and so on, there is no need to believe in a God who will either provide these things or make things right in your next life. The world’s least religious societies, the data tell us, are both the most prosperous and the happiest. So much for the salubrious and consoling effects of religion!

Secularism in the U.S. is increasing, but it’s increasing even faster in the UK, as the following Guardian article (h/t: Matthew) reports: 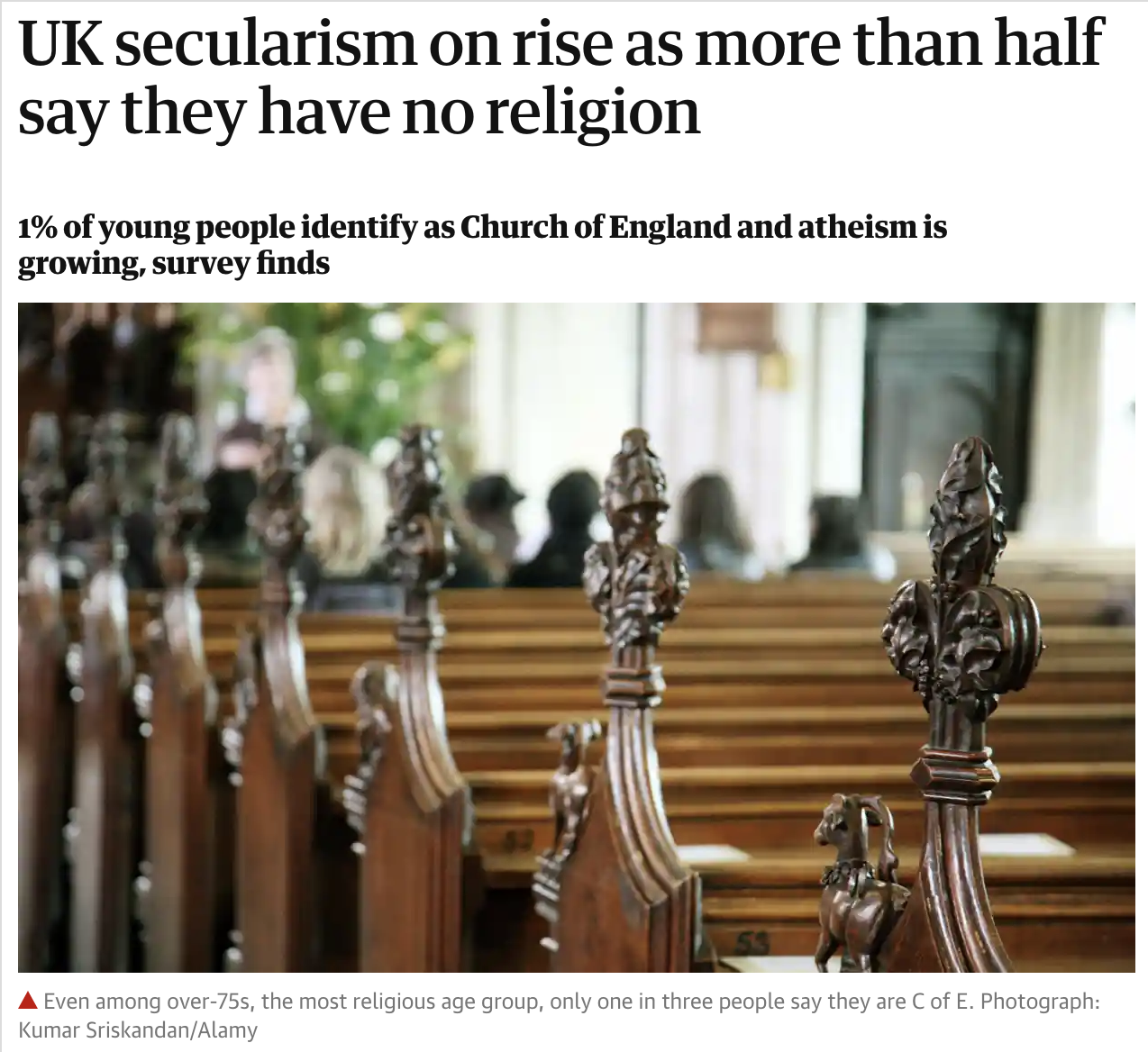 This may be surprising in a land that has a state religion (Church of England, of course), but as we know from many Brits who report in the comments on this site, nobody pays much attention to the CoE, and its pews are emptying at an alarming rate. The Guardian article informs us that this is due not so much to deconversion of people away from faith, but to the dying off of the religious, who tend to be older. In other words, religious dinosaurs are going extinct, body by body. Here are some of the Guardian‘s facts (these are direct quotes):

According to my calculations, in 144 years, 100% of UK residents will be ‘nones’; and in roughly 50 years nobody will identify as Christian. Those are wonky calculations, of course, as the figures will asymptote—some folks will always believe. Still, the pace of change is pretty astounding.

But wait! There’s more! Nonbelievers aren’t just having a faith that doesn’t fit into a recognized religion, or are general deists. Rather, increasingly they are becoming nonbelievers:

That’s 25% of the population being explicit atheists: an increase of 15% in only 21 years.  Finally, trust in religion—as opposed to other institutions—has decreased, perhaps because of sex scandals in Catholic churches. These figures, which show an increasing trust in science, are quite heartening:

That’s all good news, I think, but some media outlets still tout claims that religion, or aspects of it, are increasing in the West. Here’s a new article from the odious HuffPost (I had no free will to ignore it), which implies an increase in religion, or at least an increase in the number of people becoming nuns.

Here’s the totality of HuffPosts’s evidence:

A 2008 Pew Research Center study found that Catholicism lost more adherents in the late 20th century than any other religion in the U.S. About a third of Americans raised Catholic reported that they had left the church.

The contraction hit church staff, too—its priesthood and its community of nuns. In 1965, America had 180,000 perpetually professed Catholic sisters, the technical term for women who have pledged their lives to chastity, poverty, obedience and serving the church. By 2010, that number tanked to fewer than 50,000. In 2009, more Catholic sisters in America were over 90 years old than under 60.

But right around the time I began to notice my high school classmates’ burgeoning faith, something flipped. After 50 years of decline, the number of young women “discerning the religious life”—or going through the long process of becoming a Catholic sister—is substantially increasing. In 2017, 13 percent of women from age 18 to 35 who answered a Georgetown University-affiliated survey of American Catholics reported that they had considered becoming a Catholic sister. That’s more than 900,000 young women, enough to repopulate the corps of “women religious” in a couple of decades, even if only a fraction of them actually go through with it.

. . . Patrice Tuohy, the publisher of guides for people considering the religious life, including VocationMatch.com, told me that not long ago she used to get only about 350 queries a year by phone and online. Last year, she got 2,600.

None of this supports the contention that an increasing number of Millennials are becoming nuns. Suck it up, believers: your faith is on the way out.