Much of the time while Jerry was in Hawaii, I was traveling in New York and New England, including attending Evolution 2019 in Providence, RI, the annual joint meeting of the Society for the Study of Evolution, the American Society of Naturalists, and the Society of Systematic Biology. The opening night is highlighted by the Stephen Jay Gould Prize Public Outreach Lecture. The Prize is given for “sustained and exemplary efforts [that] have advanced public understanding of evolutionary science and its importance in biology, education, and everyday life”. This year’s Prize winner was Jerry’s erstwhile Ph.D. student Mohamed Noor of Duke University.

The title of his lecture was “Evolution in the Final Frontier: Why Might We See So Many Humanoid Aliens in Star Trek?” He delivered it to a packed house, some in Starfleet uniform. (The opening night is open to and advertised to the general public.) Mohamed is the author of Live Long and Evolve (Princeton University Press, 2018), and his talk dealt with one of the topics in the book. 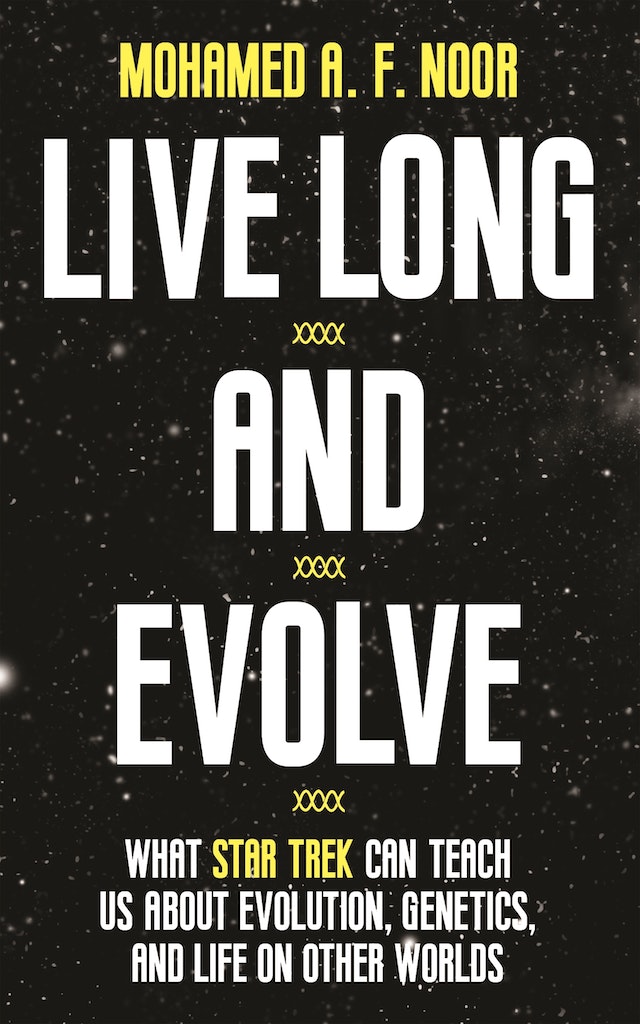 Some of Star Trek‘s writers have been renowned science fiction authors, and the franchise has long been known to pay attention to the scientific commentary about the series. My favorite example of this is the “Heisenberg compensator“. When it was pointed out that Heisenberg’s uncertainty principle (which states that either the position or the velocity of a particle could be known, but not both) meant that transporters would have a hard time doing what they are supposed to do, Star Trek writers invented the “compensators”, which, in some unknown fashion, overcame this difficulty.

Mohamed’s talk dealt with another such issue: why do alien species from all over the galaxy look so much alike? And so much like us? You know—roughly bilaterally symmetric, 4-limbed, bipedal, encephalized, the head with eyes, ears, nostrils, a mouth. The aliens might be a different color, or have head ridges, even antennae, but they look very human. The short, and probably pragmatically correct, answer is that the aliens had to be played by human actors, and anything else would be either undoable, prohibitively expensive for a TV series, or both. But Star Trek wanted a principled answer.

The principled answer that I knew of came from The Next Generation series, in which a species-diverse group of current humanoids encounter a recording made by an “ancient humanoid“, which explains that they had “seeded” planets across the galaxy with DNA that would drive evolution on those planets in a humanoid direction. It was never explained how this would work.

Mohamed’s careful study of Star Trek encountered two other explanations, both in the original series: humans derive fairly recently from visiting alien astronauts; or, aliens (most of them anyway) are derived from life on Earth. Rather than give Mohamed’s choice from among these three which is most plausible given what we know about evolution and genetics, I’ll leave it as an exercise for readers to think about, or debate in the comments (or, you could read his book!).

I’m about halfway through the book now, and as a long time Star Trek fan, I am fascinated. I have not yet gotten to the chapter which discusses all those interplanetary hybrids (like Mr. Spock), and am looking forward to it. In the book, Mohamed usually introduces each topic with a Star Trek scene touching on an evolutionary or genetic topic, and uses that as a launching point to discuss the biological principles involved. Among the topics he covers are common ancestry, phylogenetic trees, natural selection, convergence, genetic drift, what DNA is, and how DNA ‘works’. And I’m not finished yet!

The book is aimed at the general public (i.e., it is not a textbook), and Mohamed gives the most generous reading possible to Star Trek‘s scientific forays—it is not a compilation of errors. Footnotes give references to further Star trek episodes, and references in the comprehensive endnotes cover the scientific literature very well, including in areas outside Mohamed’s own areas of research. Many of these references are to the latest literature; the suggested reading adds more accessible works, including Dawkins’ Blind Watchmaker, and, of course, his mentor’s Why Evolution Is True. In fact, near the beginning of his lecture, he gave a shout-out for WEIT (the book).

Mohamed has long used science fiction to teach science, and been much involved in outreach activities, as regular WEIT readers will recall. In 2017, the Evolution meetings and Heroes and Villains Fan Fest/Walker Stalker Con were both being held simultaneously in Oregon Convention Center, and Mohamed attended both! You can see videos of him engaging scientific topics through science fiction here, here, and here, and a Star Trek vs. Star Wars debate. There are also a number of videos of his students making presentations at his Youtube channel.

84 thoughts on “Live Long and Evolve”