Today we have another installment of the wonderful peregrine falcon photos of evolutionary ecologist Bruce Lyon. (He’s also just returned from a trip to Alaska and promises many more photo-stories of northern birds). Bruce’s notes are indented:

One last post for the year of the peregrine falcon (Falco peregrinus) family I have been watching on the California coast between Santa Cruz and San San Francisco (here for previous post). Peregrines are famous for their ability to fly and maneuver at high speed, an ability that is essential for capturing the fast flying and evasive birds they hunt. On windy days, the birds seem to get feisty and start chasing everything that comes anywhere in the general vicinity of the nest area (cormorants, pelicans, gulls). Sometimes they they dive-bomb me on windy days. I have studied parent birds of many species that defend their nests by chasing potential predators away and this seems different—the wind puts the piss and vinegar into these birds and it almost seems like play. They seem to have fun flying the way they do. It is also unclear why they would decide to defend their nests only on windy days. Windy days also offer the best opportunity for photographing the birds doing interesting things in the air.
Below: The female about to go into a stoop, the rapid dive where the birds fully close their wings for maximum aerodynamic shape that lets them achieve speeds of more than 200 miles per hour. 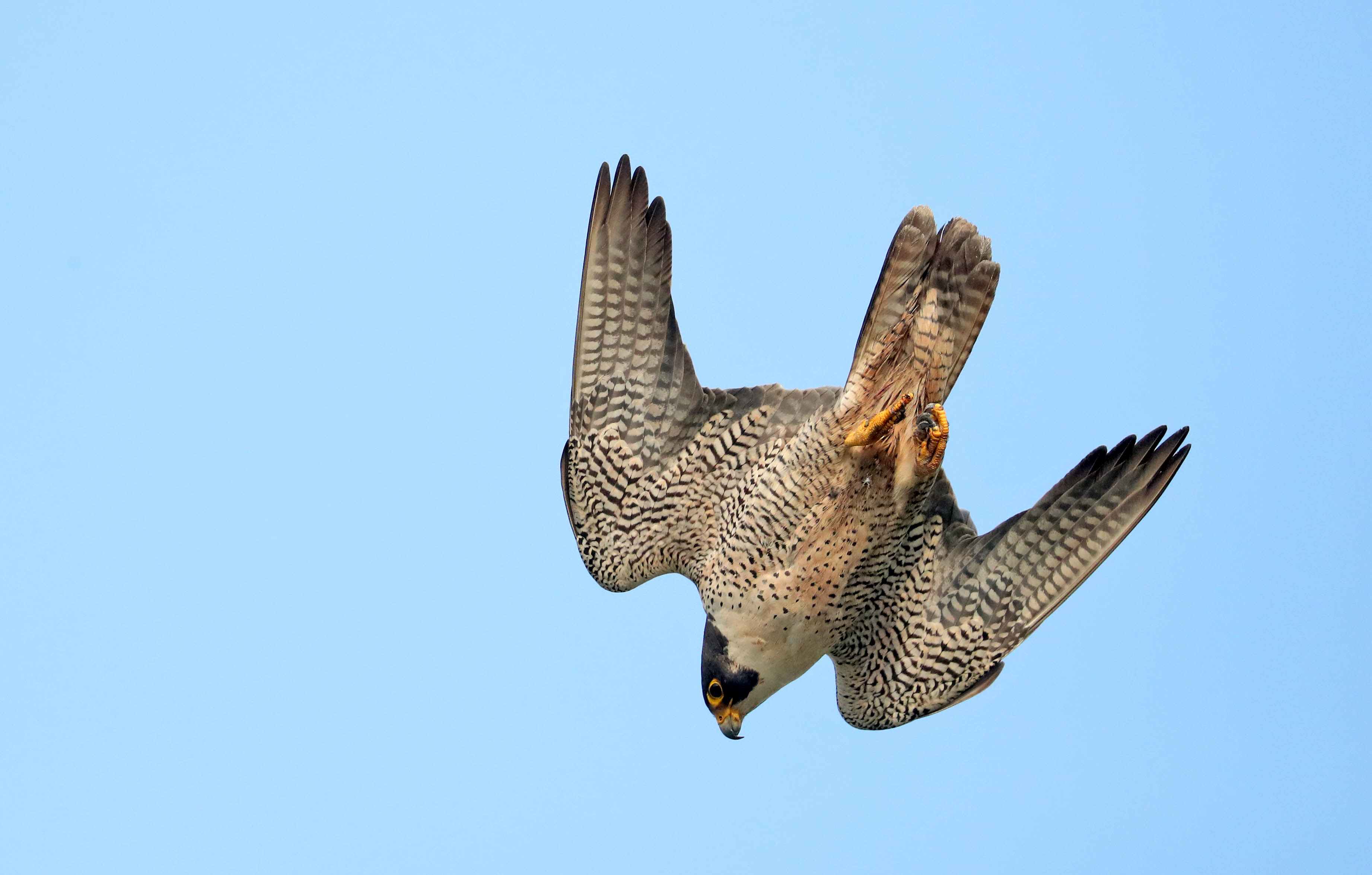 Below: The male goes into a brief stoop as he returns to a favorite perch after an unsuccessful chase of some shorebird species out at sea (most likely a phalarope as they favor phalaropes during the prey’s migration in late May and early June). 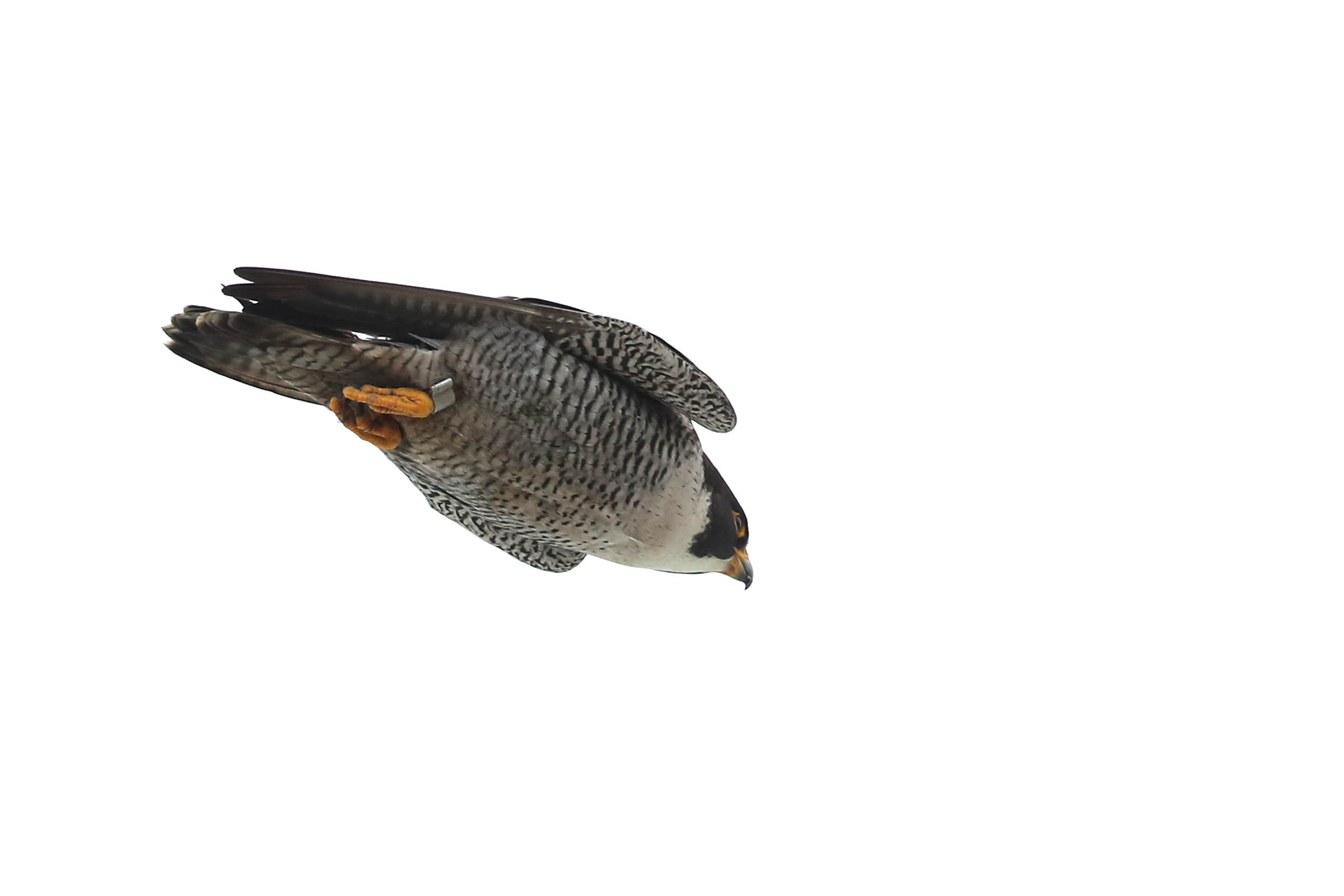 The male returning with a juvenile starling. The pair normally fancies Eurasian Collared-doves as prey but this year they started going for starlings and a few waterbirds like phalaropes, gulls and guillemots. 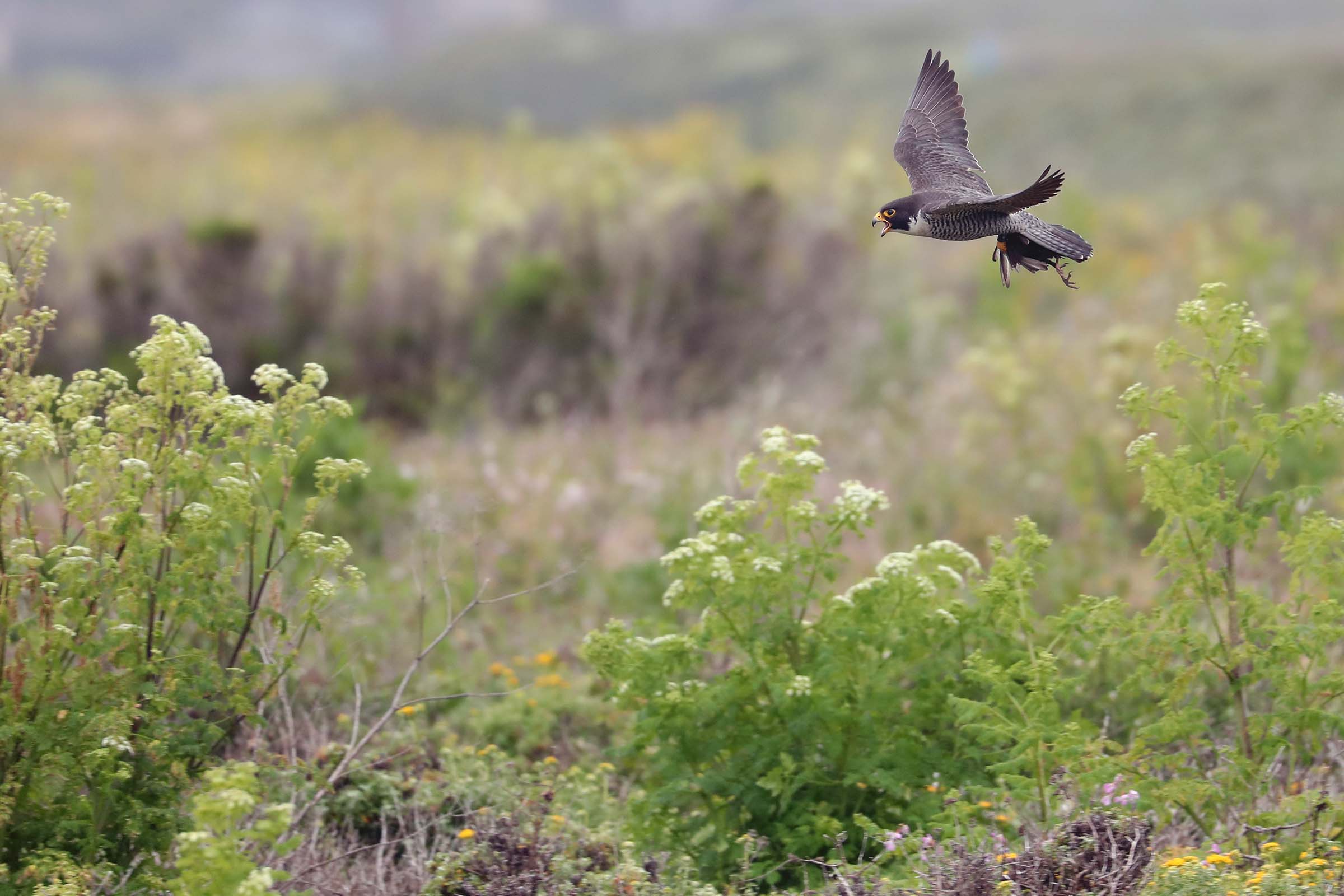 This year the birds also used a new favorite plucking spot, some sort of cushion plants. The plucking spot was in a corner of the nesting bay which made it possible to view them from two angles on the cliff top. In previous years they turned shy whenever they had food so it was often difficult to approach them at their plucking spots. This year, however, they were much more relaxed about me watching them eat. Here the female has a Eurasian Collared-dove. 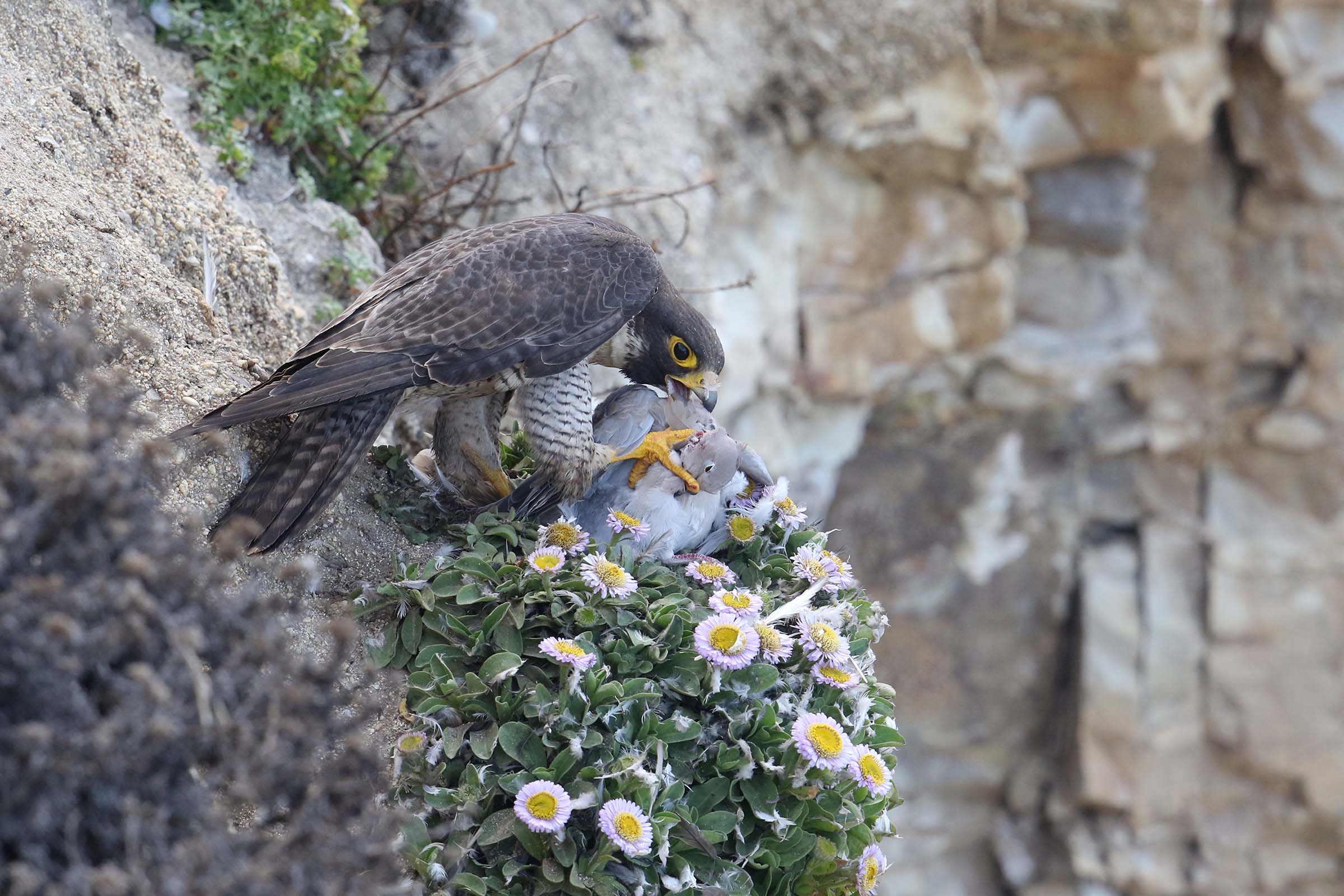 The view of the same plucking station from the other perspective, at an earlier date when the flowers were not in bloom. The female is just polishing off a dove. 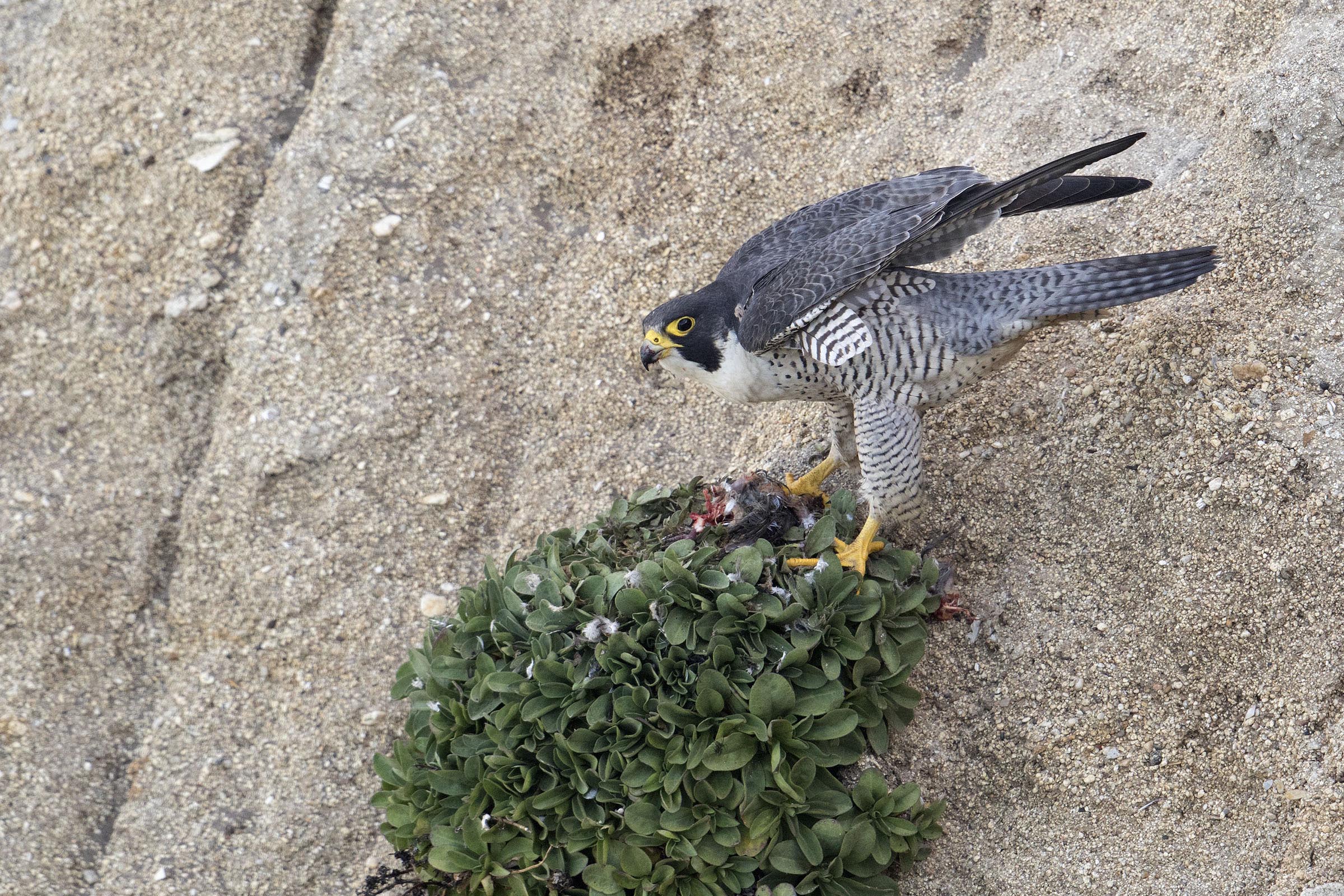 For a few days it seemed that the male was specializing on Red-necked Phalaropes, a small shorebird that migrates north to its arctic breeding grounds along our coast, not too far off shore. I watched several attempts at hunting phalaropes, including a couple of successful captures. One capture in particular, was dramatic. The male flew out to sea (perhaps a mile out) climbing steadily. He then suddenly went into a completely vertical stoop, gaining great speed. He then leveled out sharply just above the water, skimmed low across the water for about 100 yards and then chased the phalarope for another 100 yards before snatching it out out of the air. He brought it back to a plucking spot, ate the head, and then took it to the nest to feed the chicks. He took a couple of attempts to go to the nest which gave me lots of opportunity to take pictures. Maybe he was just showing off!
A fly-by with the phalarope in his talons 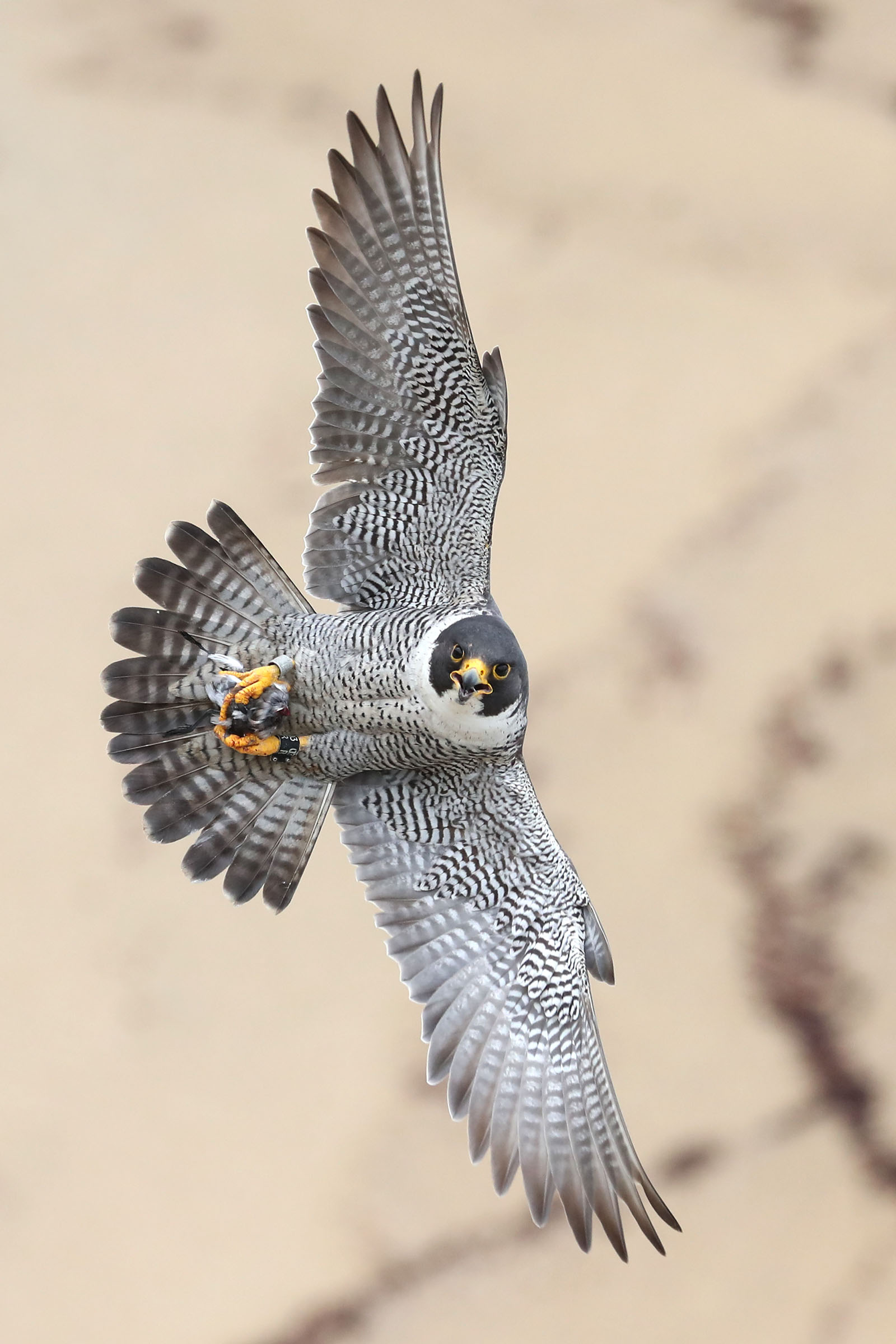 And finally to the nest, just out of sight. 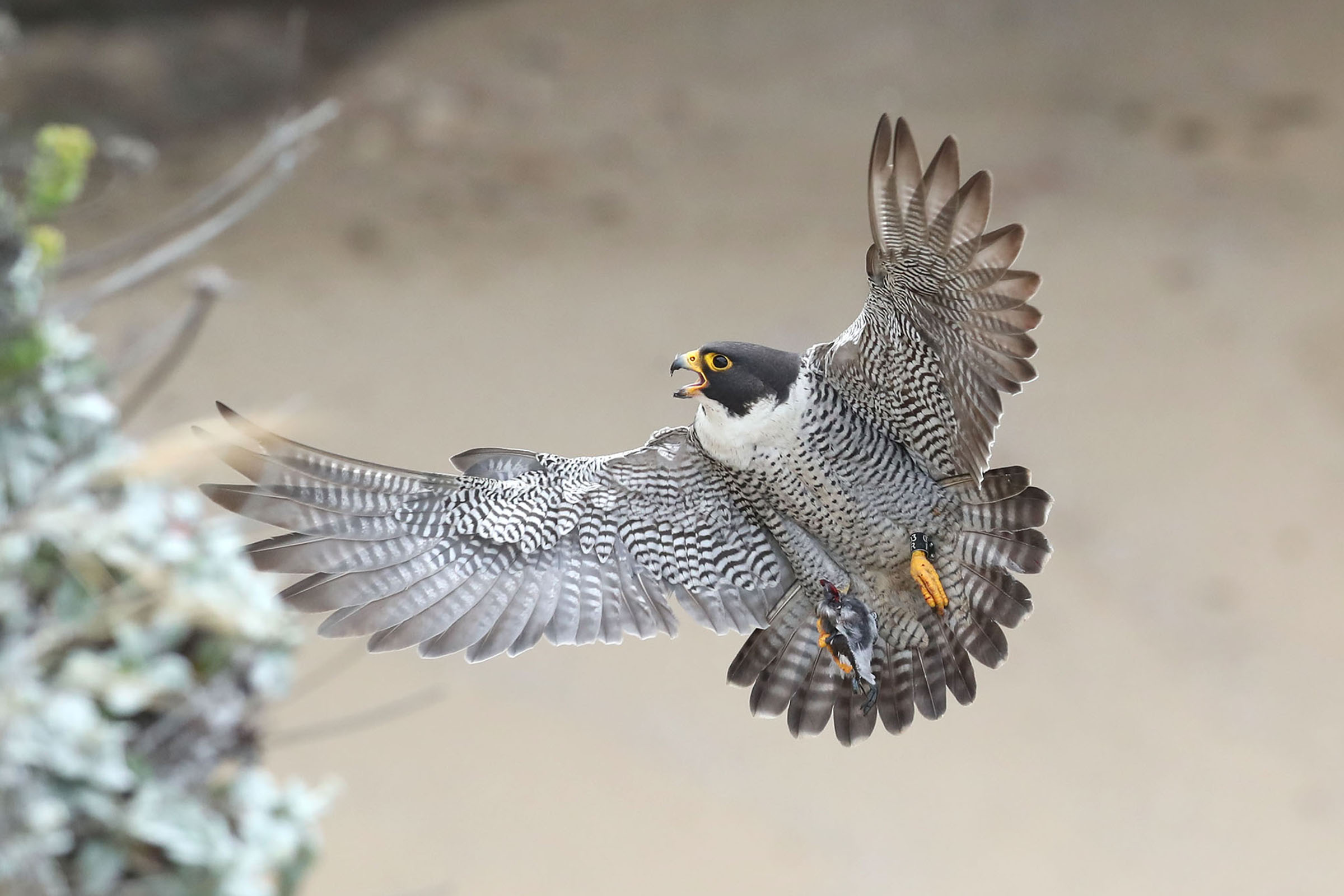 This year produced a bumper crop of chicks—three chicks and as far as I can tell they all made it. Last year, in contrast, they had a brood of four chicks but it quickly dropped to one chick after they fledged.
Below: Two of the chicks  on the perch that is favored by the adults and kids alike. The third is hiding around the corner. 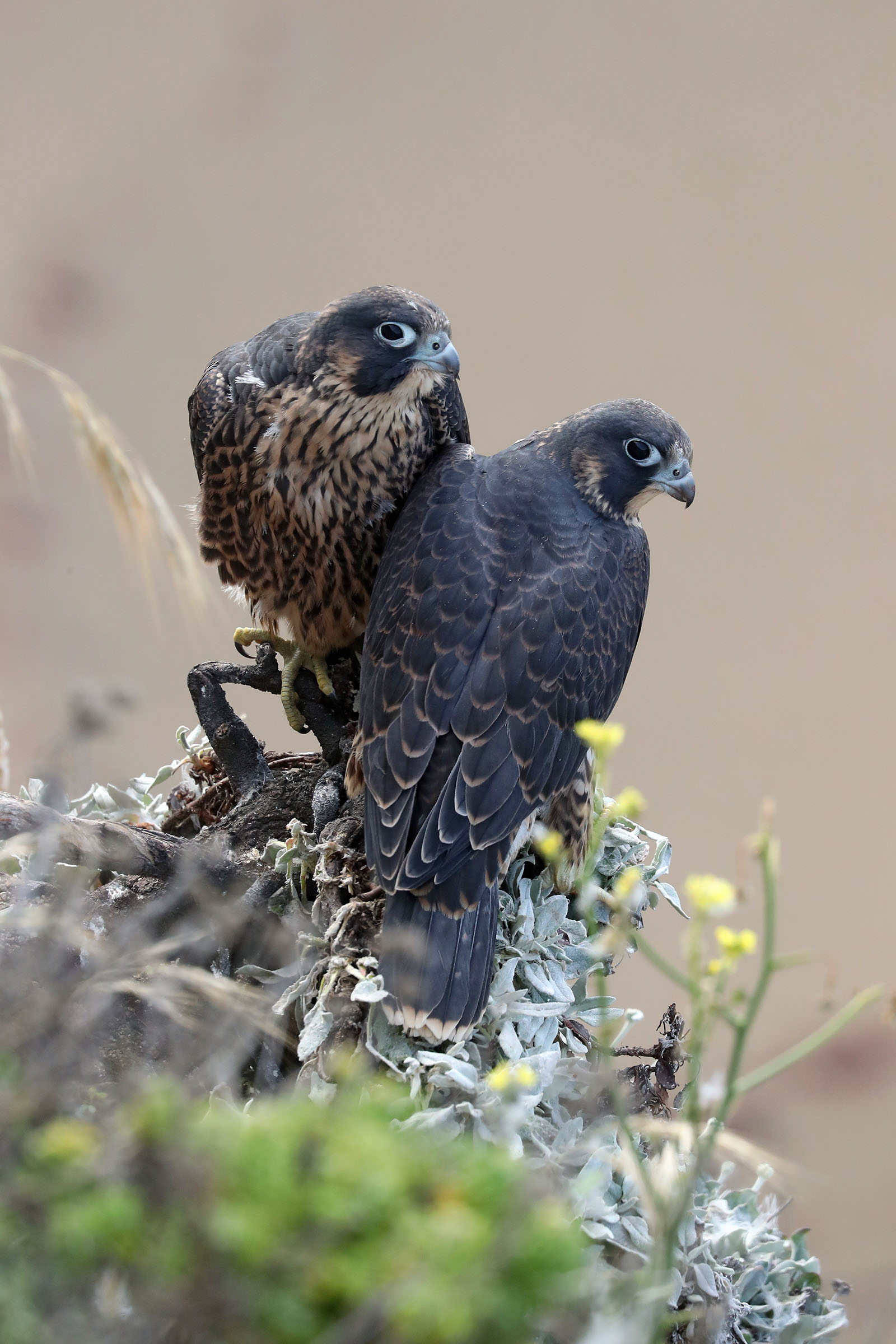 One of the chicks gives me a curious stare. 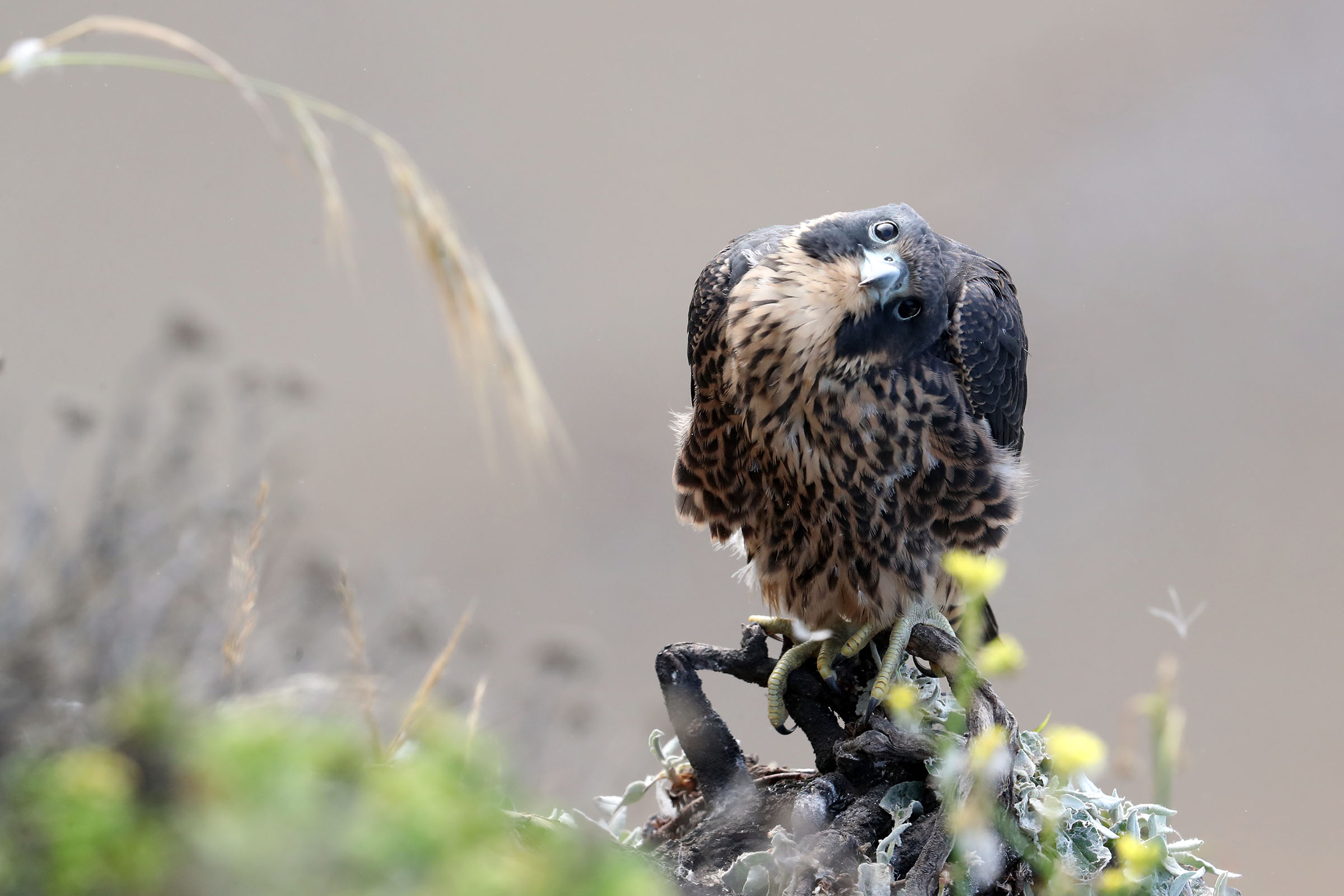 One of the chicks calls excitedly to a parent who is soaring above the nest. Message: go get me some damn dinner! 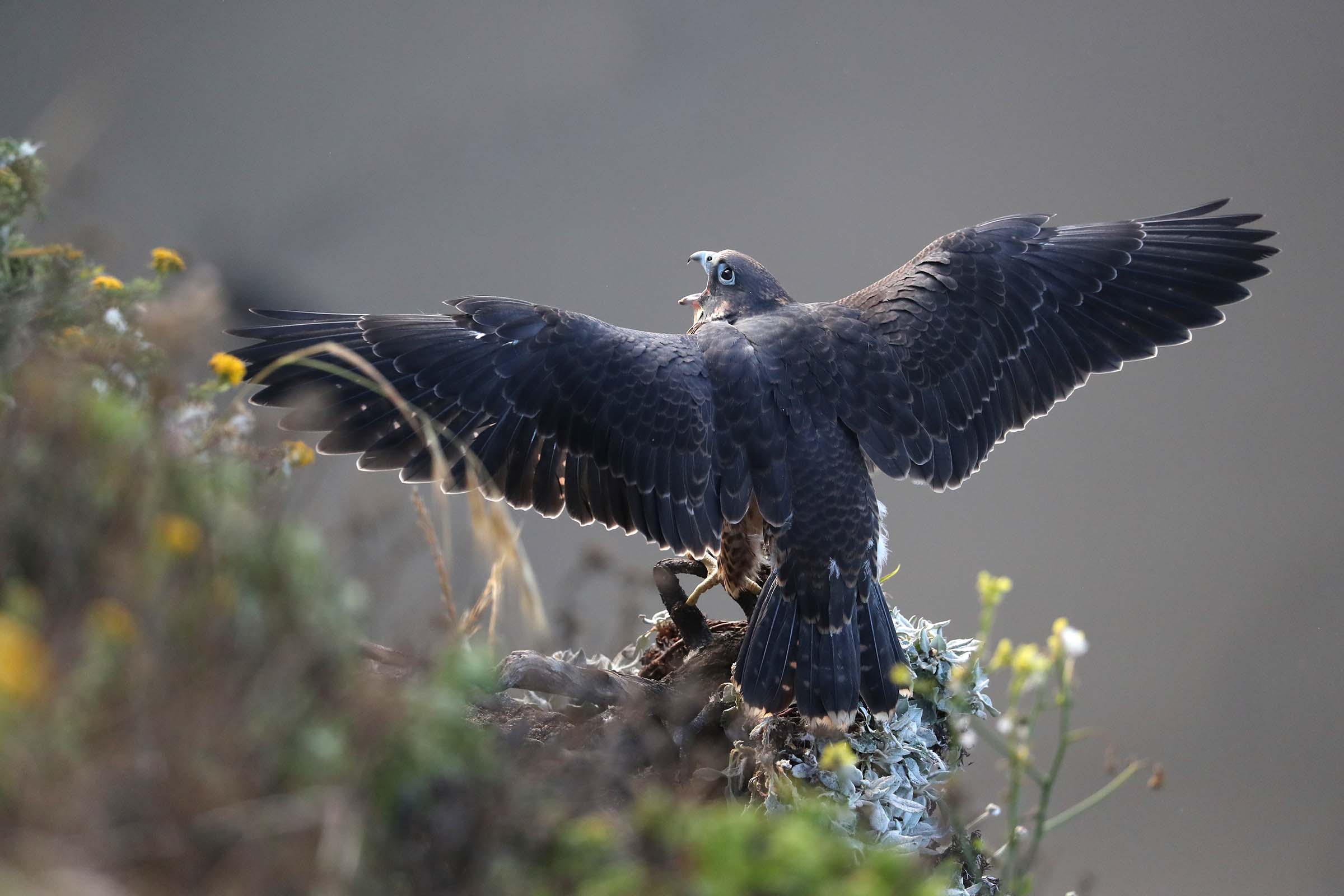 The three fledglings gather around a starling the parents have dropped off, which the center bird has in its talons. Once the chicks get large enough (and even before leaving the nest) the parents quickly drop the prey item off and leave. Otherwise they get mobbed and harassed by the chicks. This year, the chicks seemed to share the prey more than I had seen in other years, and there was less possessive mantling of prey (wrapping the prey with their wings to prevent other chicks getting access). Female peregrines are much larger than males and this size difference is apparent in fledglings. Based on the sizes of the chicks, I concluded that they produced one female and two male chicks. The female is the center bird here. 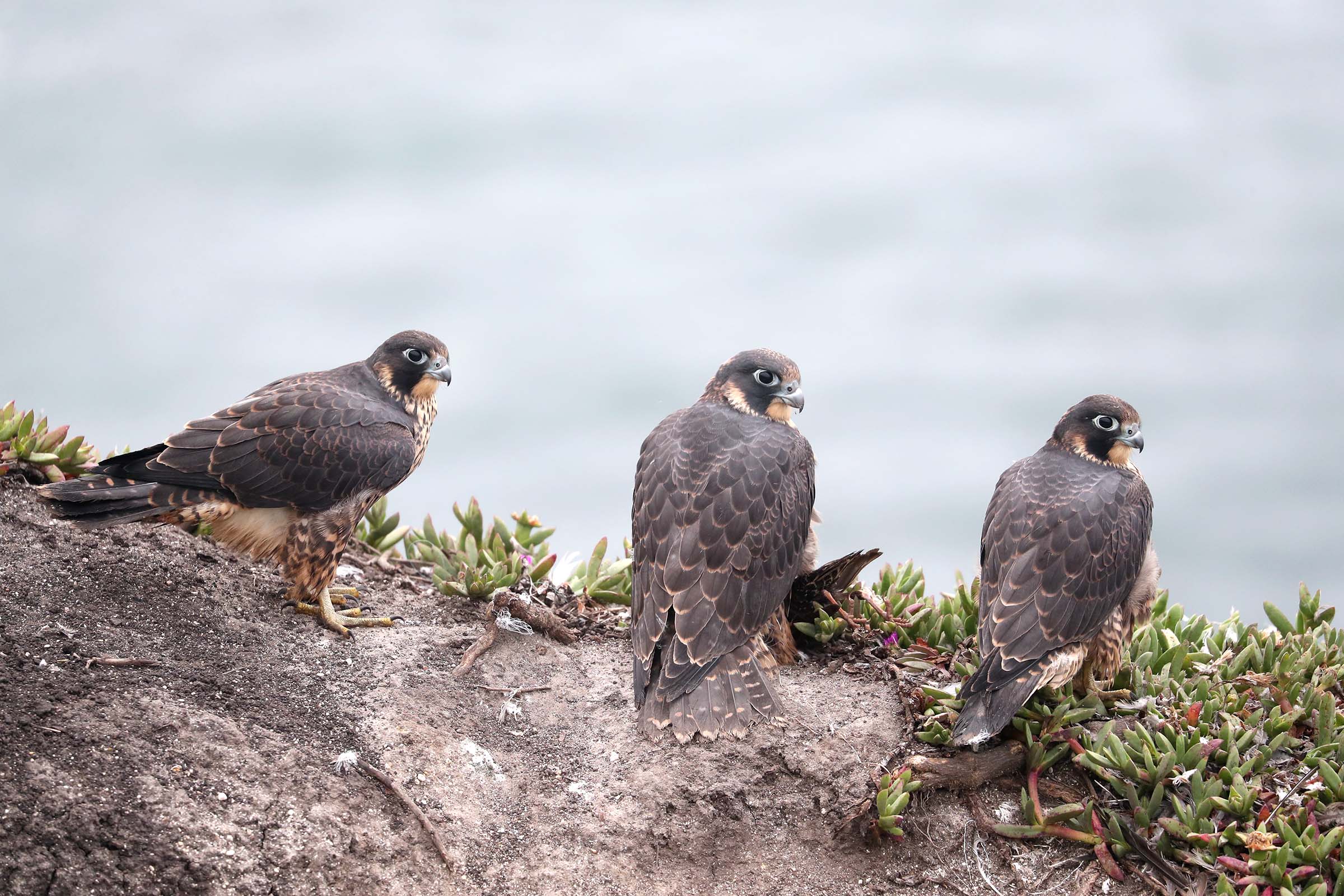 A meal that even all three hungry chicks could not finish—a pigeon guillemot (a seabird related to puffins and their relatives). 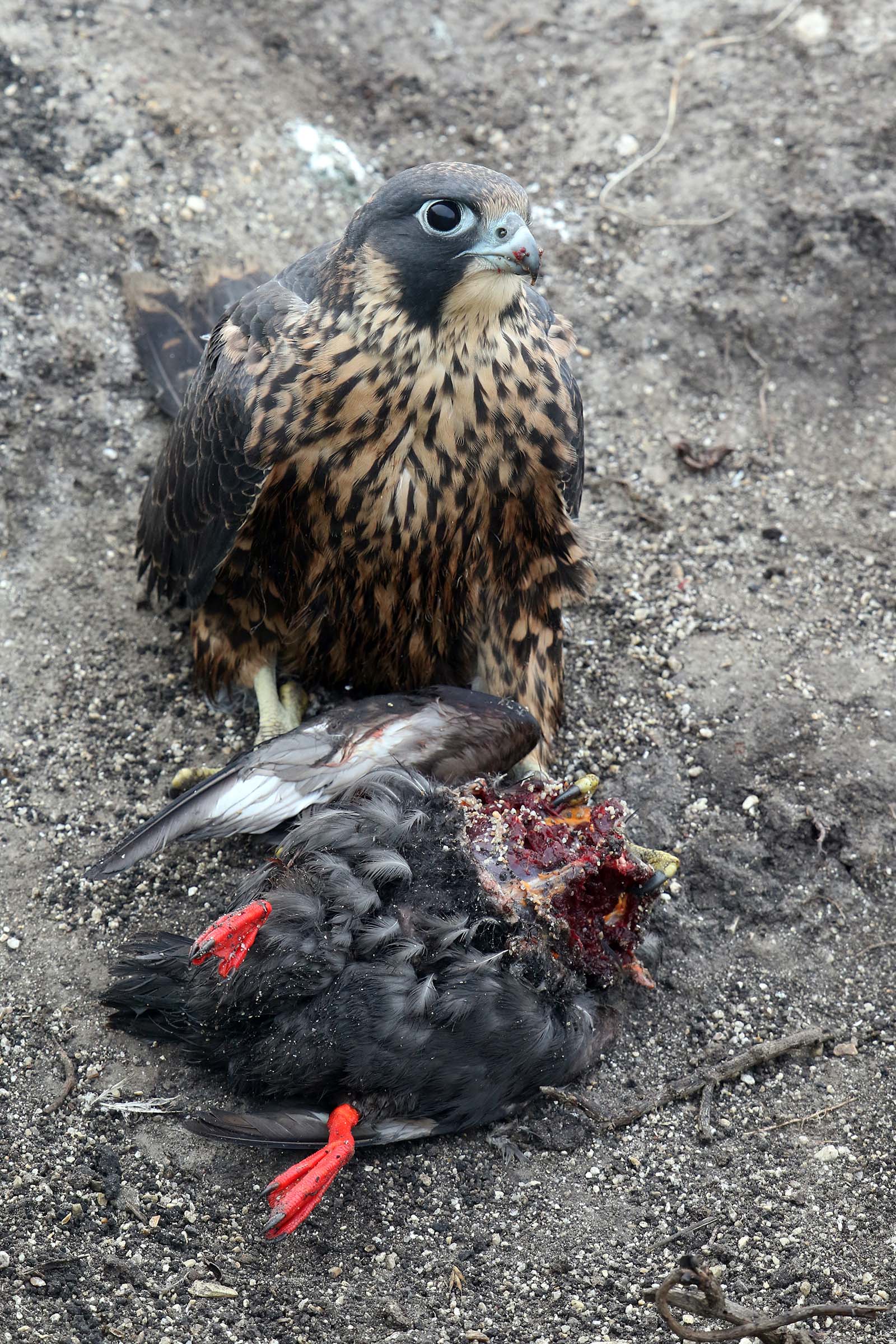 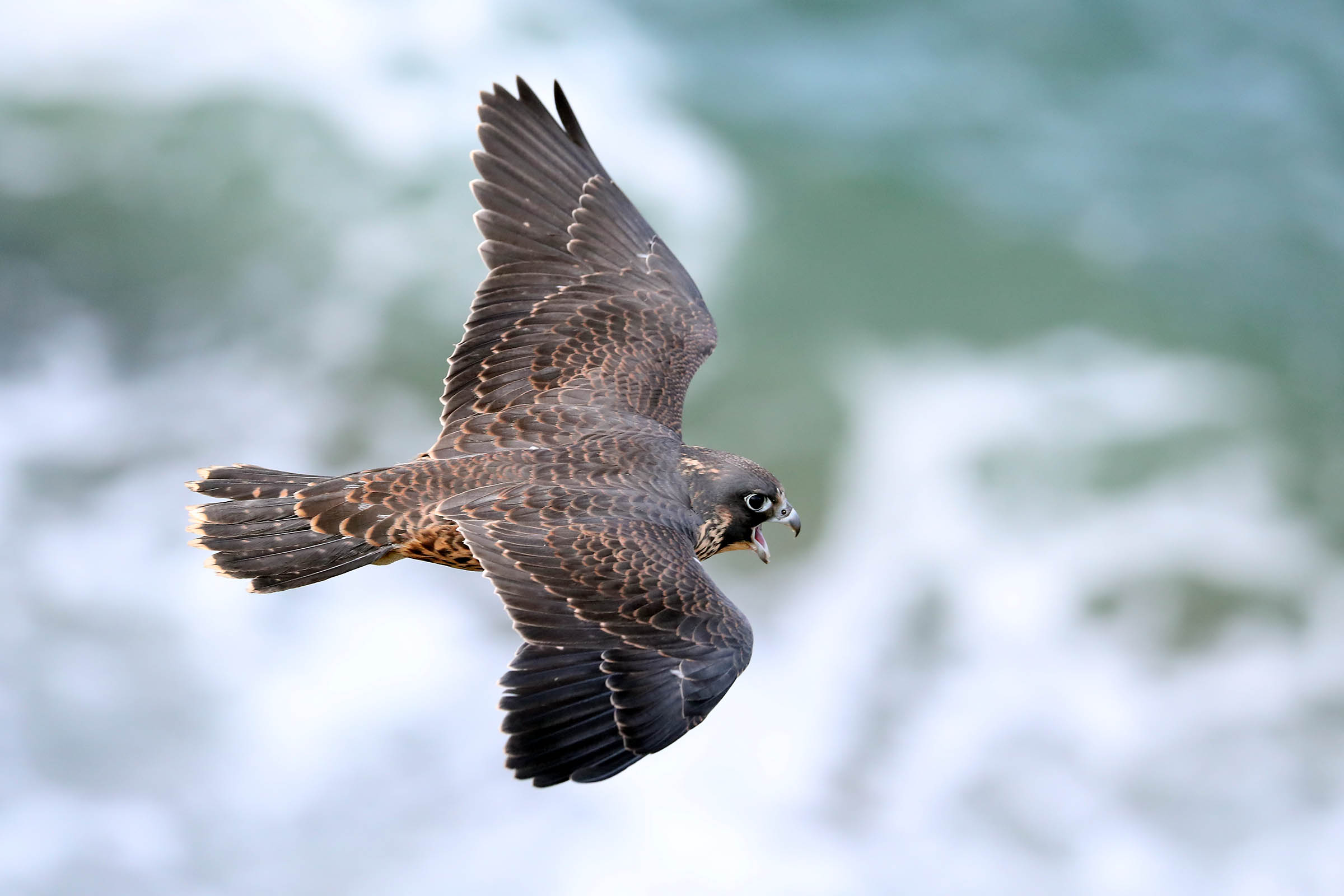