There’s a new op-ed in the Washington Post, “Our politics are in our DNA”, written by Sebastian Junger, an American journalist and author.  His primary data, which, based on the article, seem reasonable, suggest that a large part of the variation among Americans in their political attitudes—conservatives versus liberals—resides in our DNA, with roughly half of that variation ascribed to variation among genes.

But his conclusions—that political attitudes evolved by natural selection, and that we should encourage the persistence of both liberals and conservative—are questionable. Junger has committed the naturalistic fallacy by assuming that what has evolved not only remains useful, but is essential to preserve in modern society. And that doesn’t follow.

The article is below, but if you can’t get it by clicking on the screenshot or on the link above, judicious inquiry will yield you a copy. 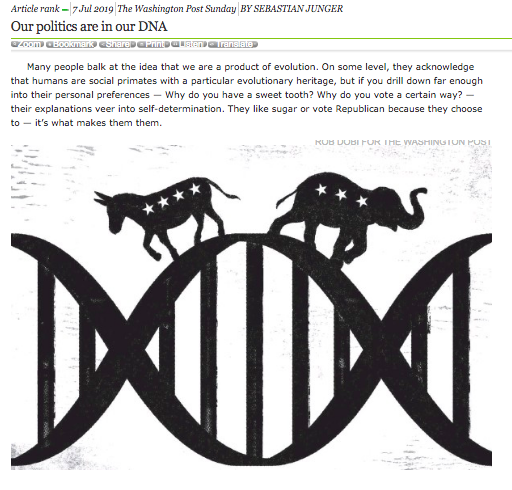 The article begins okay, noting the resistance to biological determinism of people on both Right and Left, but for different reasons:

. . . the point is that anti-evolutionary bias makes rational discussion of the human race far more difficult.

This particular bias is prevalent at both ends of the political spectrum for different reasons. Cultural conservatives often reject the theory of evolution because it elbows aside the proposition that God created humans in his own image. Secular liberals, on the other hand, have a different agenda. They are comfortable with a godless universe but can balk at the prospect of living in a society that is deeply influenced by biological realities. Worldwide phenomena such as aggression and warfare are ascribed to culture — rather than genetics or biology — because to do otherwise would be to give up, as it were, on the struggle for social justice.

“Heritability”—the way geneticists determine the degree of genetic variation underlying the variation of a trait in a single population—is defined as the proportion of the total observed variation in the trait (in this case political affiliation) that is based on variation among people’s genes. (It’s a bit more complicated than that, but this will do for now.) It ranges from 0 (no genes contributing to variation) to 1 (all trait variation based on genetic differences). The remainder of the variation among people for such traits can, for our purposes, be imputed to variation in people’s environments, both pre- and post-natal. The heritability for height among Americans, for instance, is about 0.6 to 0.8, which means that more than half of the difference among people in how tall they are resides in different genes affecting height. The heritability of IQ is roughly similar: 0.5-0.8.

There are a variety of ways to measure heritability, all involving correlation of traits among individuals of known but different relatedness. In animals and plants, parent-offspring correlation gives us one way, but for human traits like religiosity, wealth, or political affiliation, parent-offspring correlations don’t just involve correlations between genes, but also correlations between environments. Religious people tend to give children a religious upbringing, rich parents have rich kids, and so on. The heritability of wealth is huge, but that reflects not parents sharing “money-acquiring genes” with offspring, but largely cultural inheritance of both wealth and social position. To get good measures of heritability for behavioral traits, we need a way to break the cultural correlation between parents and offspring.

The effect of genetics is so strong, however, that according to empirical studies, identical twins who are raised apart are more likely to hold similar political views than fraternal twins who are raised together. According to Avi Tuschman, author of “Our Political Nature,” between 40 and 60 percent of the variance in our political attitudes is heritable, stemming from genetic differences between individuals; the rest comes from our environment, especially during our formative years.

What could these genes be doing to affect someone’s political views? Junger reports that brain structure may be responsible, but his statement, at least in the article, isn’t convincing:

Political opinion also relates to brain structure: An experiment measuring the sizes of the anterior cingulate and the right amygdala accurately predicted a person’s political orientation 72 percent of the time. Some of these political proclivities appear to be connected to Chromosome 4 in a neurotransmitter receptor called NARG1.

The problem here is that we don’t know whether brain structure affects political views or vice versa. After all, your ideology and how you treat others could affect your anterior cingulate and right amygdala. But if the product of NARG1 is measured at birth, and then only later political differences show up that are correlated with its initial level, that would suggest that that gene, at least, is causal. But the article doesn’t say, and I don’t know.

So far so good. But then Junger begins suggesting that both liberalism and conservatism were selected for as adaptive traits, and here he goes off track:

The fact that political opinion is rooted to some degree in our genes and biology means that both liberalism and conservatism may be adaptive traits that got passed down through thousands of human generations because they helped us survive. But another trait that is clearly adaptive is our ability to get along. Political arguments may rage within families, communities and even nations, yet they only rarely threaten the cohesion of the group. On some level, humans seem to understand that differences of opinion are unpleasant but splitting up may be even more unpleasant — or downright dangerous. Humans don’t survive alone in nature.

First of all, political opinion (or its ancestral equivalent) need not have been selected for directly: they may be “spandrels”—byproducts of differences in brain structure subject to selection for other reasons. Or they could reflect genetic differences that persist but weren’t subject to natural selection at all—they could have been “neutral” traits. After all, do we know whether there was a correlation in our ancestors between political opinion and reproductive output? I don’t think so!

Another problem is why, if the traits persisted because they were adaptive, both liberal genes and conservative genes persisted over aeons? Wouldn’t one worldview be more adaptive than the other, and take over? Only special kinds of natural selection (for the cognoscenti, “frequency-dependent selection” or “balancing selection”), can maintain several forms of a gene in a population.

But there’s no evidence for any of these forms of selection; it’s all speculation. And a group-selection explanation for genetic/ideological diversity is subject to all the weaknesses of group selection, including the fact that selection for the best ideology within a group (by “best”, I mean “causing you to produce more offspring”) will overwhelm the effect of differential group proliferation.

Finally, even if somehow liberal and conservative genes were selected in our ancestors and still persist, that doesn’t mean that we should promote their persistence. That is a form of the naturalistic fallacy: what evolved is what remains good in modern society. Junger:

If liberalism and conservatism are partly rooted in genetics, then those worldviews had to have been adaptive — and necessary — in our evolutionary past. That means that neither political party can accuse the other of being illegitimate or inherently immoral; we are the way we are for good reason. Every human society must do two things: It must be strong enough to protect itself from outside groups, and it must be fair enough to avoid internal conflict. A society entirely composed of liberals risks being overrun by enemies, and a society entirely composed of conservatives risks breaking apart over issues of inequality — “social justice,” as it’s now termed.

Put those groups together, however, and you have addressed the two greatest threats to human welfare: enemies and discord.

It goes on, but you can see that Junger thinks we should do what we can to promote the persistence of liberals and conservatives.

That doesn’t follow, for whatever milieu promoted the existence of genes affecting ideology no longer obtains. And of course the nature of ideology has changed as well, for genes aren’t destiny. (Even if the heritability of height is large, that doesn’t mean we can’t change height by intervening, as has happened with changes in nutrition in both Japan and the Netherlands.) Conservatism in the 18th and 19th centuries is very different from conservatism today, even in the U.S. Very few conservatives, for instance, now insist that slavery was really okay. And remember that Lincoln was a Republican! People change their ideologies as they grow older, and, as Steve Pinker emphasizes, the whole nature of human moral ideology has moved in a progressive direction over the past few centuries.

So yes, I’m prepared to accept that a substantial amount of variation in human ideology is based on variation in their genes—though I’m taking Junger and Tuschman at their word here. But I’m not prepared to say that we need to keep both liberals and conservatives around because they both evolved as adaptive strategies. Perhaps a society that comprises both liberals and conservatives is indeed a more resilient and rational society than one composed (as I’d favor) of more liberals. But that is an empirical matter, and we can make political policy without taking biology into account. We don’t need to say “we need Republicans because Republicans are the result of natural selection.” Maybe conservatism, or at least many of its principles, are inimical to social progress.

Junger may be right, but when he gets to the evolution part and floats the naturalistic fallacy, he’s entered the realm of pure, unsupported speculation.

68 thoughts on “Are our political views encoded by our DNA?”