Today’s Jesus and Mo strip, called “billy,” is named after comedian Billy Connolly. The link is in the cartoon’s description: it’s a 30-second clip of Connolly declaring that “religion is OVER.” The author’s description:

It’s another real-life joke! This is the story. This is part of the Billy Connolly routine. And this is a recent screenshot from Asda’s online store: 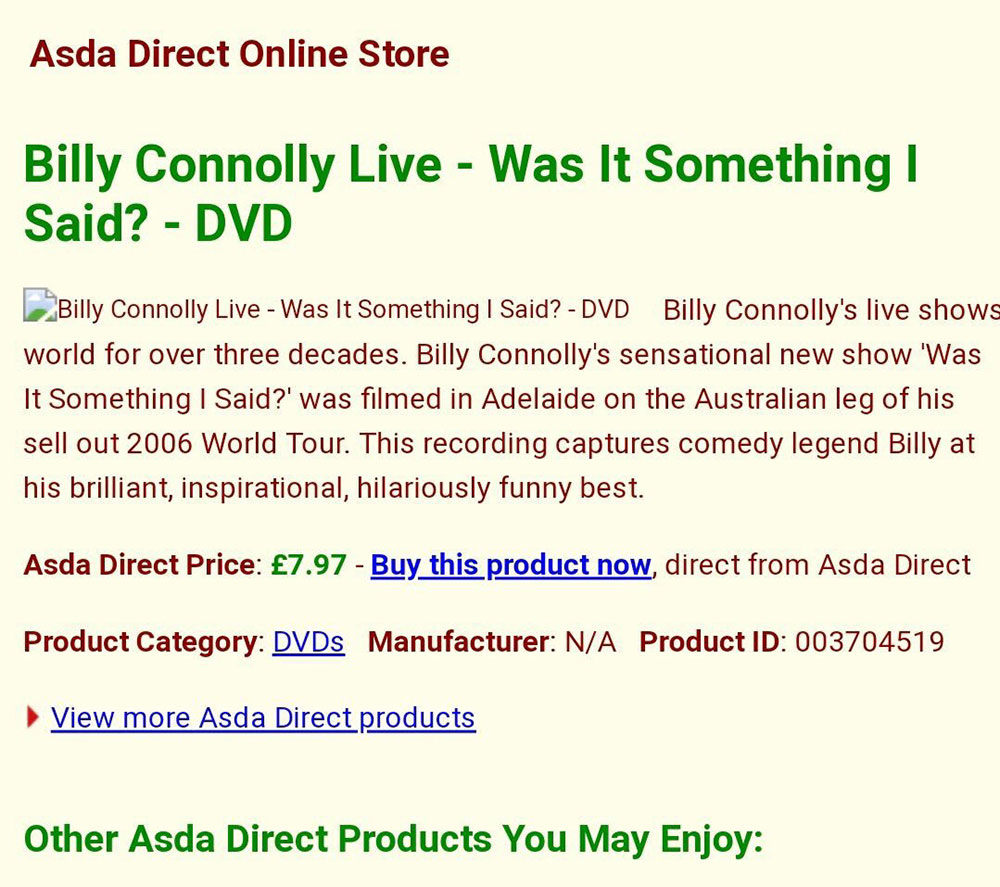 Before we get to the cartoon, it will behoove you to look at the Mirror story, in which an Asda  employee (Asda is a supermarket chain) was fired simply for posting the short clip. Why? It impugns all religions but the reason they gave was, yes, “Islamophobia.” From that story:

An Asda employee says he was sacked by the supermarket giant after sharing a Billy Connolly sketch about religion on his Facebook page.

Till worker Brian Leach was dismissed after a colleague in Dewsbury, West Yorkshire, complained that the comments in the Scottish comedian’s skit, which was years old, were anti-Islamic.

The 54-year-old disabled granddad, who has been accused of Islamophobia, said he was hauled into a meeting and later “dismissed without notice” for violating Asda’s social media policy.

. . .The video referred to in the post is Mr Connolly’s Religion is Over taken from his live stage act a number of years ago.

In the sketch, the comedian rails against religious followers of Christianity and Islam.

An Asda spokesman said this:

“However we do not tolerate any form of discrimination from colleagues or customers and take such behaviour extremely seriously.”

Discrimination? It was criticism of religion in general, with three faiths included! Yes, Leach’s clip criticized religion, which would constitute free speech in the U.S. Of course employers can fire anyone they want, but this is palpably unfair, and an odious osculation of Islam in particular. Really, they dismissed an ageing and disabled grandfather without recourse, even after he apologized? What kind of outfit is Asda, anyway?

Leach’s apology and admission that his Facebook post was offensive didn’t matter. He was sacked, and, as a disabled senior with few prospects of getting a job, was devastated.

Note that a.) it was criticism of Islam, and not Catholicism or Protestantism, that constituted the basis for the complaint. I suspect the complaining colleague was a Muslim.

b.) Leach’s post doesn’t seem to have constituted particular “Islamophobia”: he posted a clip critical of religion in general.

c.) Such is the coddling of Islam in Britain right now that people have to tread very carefully, but only about one religion. It’s perfectly fine to take the mickey out of the Anglicans. This climate, of course, is the result of a campaign by Muslims to make their religion immune from criticism. (This post will undoubtedly be banned in Pakistan for blasphemy because it includes an image of Muhammad.)

Finally, Asda SELLS the VERY CLIP THAT CONSTITUTED A FIRING OFFENSE! That is sheer hypocrisy.

If I knew where to write ASDA, I would. What an employee posts on his own social media, in particular a general criticism of religion, is not a good cause for firing and ruining someone’s life. 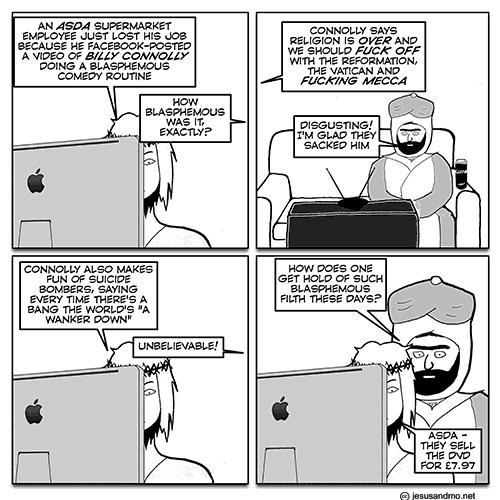