The controversy over the Birmingham schools teaching the No Outsiders lessons continues.

The “controversy” was described in an earlier Jesus and Mo post.  In short, an organization called No Outsiders proposes to teach LGBTA equality in Birmingham public schools, which some Muslim parents perceive as undermining their religion’s dictates against homosexuality. As I wrote at the time about one protestor, Amir Ahmed:

“Fundamentally [Ahmed said] the issue we have with No Outsiders is that it is changing our children’s moral position on family values on sexuality and we are a traditional community.

“Morally we do not accept homosexuality as a valid sexual relationship to have. It’s not about being homophobic… that’s like saying, if you don’t believe in Islam, you’re Islamophobic.”

This post will, of course, have to be banned in Pakistan. 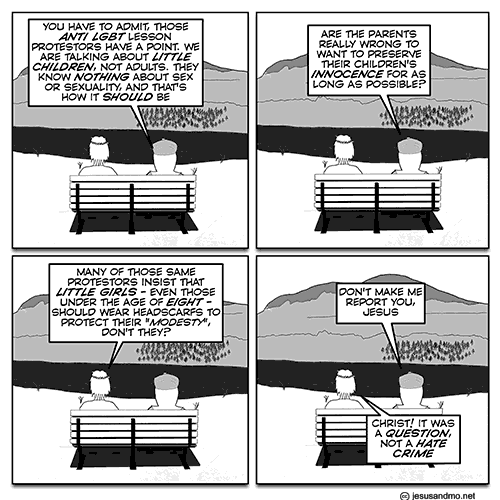