UPDATE: James Wood has responded politely to this piece in a comment below, which you can find here.

The article below (click on screenshot), by New Yorker literary critic and Harvard English professor James Wood, is a review of Martin Hägglund’s new book, This Life: Secular Faith and Spiritual Freedom, but also a paean (of sorts) to secularism and atheism.

I once spent a pleasant few hours with James in a Harvard Square coffeeshop, trying to find out if he thought literature was a “way of knowing” (as I recall, he agreed that we can’t find truths about the universe from literature itself), and I don’t want to be hard on him. Most of his pieces for the magazine are excellent, and his literary judgment is keen. But I think he’s somewhat off the mark in this review. And that is mainly because he takes some gratuitous swipes at New Atheism (and, of course, the Great Satan Dawkins), as well as implying that we don’t need to consider evidence—or, rather, the lack thereof—when we give up religion.

When New Yorker writers bestir themselves to say something good about nonbelief, you can be sure of five things:

1.) They may praise atheism, but they will also diss New Atheism.
2.) They will disdain the need for evidence when deciding whether to be a believer or an atheist. Evidence is irrelevant. This is part of the magazine’s perpetual favoring of the humanities and their “ways of knowing” over science.
3.) They will conflate religion with “passion”. One example came from a piece in the New Yorker that, while praising this website, implied that I was quasi-religious:

If atheists underestimate the fudginess in faith, believers underestimate the soupiness of doubt. My own favorite atheist blogger, Jerry Coyne, the University of Chicago evolutionary biologist, regularly offers unanswerable philippics against the idiocies of intelligent design. But a historian looking at his blog years from now would note that he varies the philippics with a tender stream of images of cats—into whose limited cognition, this dog-lover notes, he projects intelligence and personality quite as blithely as his enemies project design into seashells—and samples of old Motown songs. The articulation of humanism demands something humane, and its signal is disproportionate pleasure placed in some frankly irrational love.

4.) They will show a sneaking sympathy with religious belief and ritual; and
5.) They will lard their arguments with heavy literary knowledge and references

These features are all on view in Wood’s article, and all but #5 are missteps, though, as I said, I think the piece is generally good and certainly worth reading.

According to Wood, the thesis of Hägglund’s book includes these ideas:

a. Religion is bogus, but it’s not bogus just because there is no evidence for gods. In fact, evidence is irrelevant to nonbelief.

b. Religion is bogus because the notion of eternity, which Hägglund sees as inherent in most religions (including Buddhism and Judaism, which don’t have a concept of heaven), is incoherent and, even if comprehensible, is palpably undesirable.

c. Even religious people act as if they’re atheists because they mourn the loss of loved ones who die, and have no concrete notion of seeing them again. This is an attachment to the secular—a hidden atheism.

d. If we reject eternity, and realize that the here and now is all we have, then we must construct our secular values around that notion. Hägglund thinks that this drives us to a form of socialism. Why? Because we are all striving for maximal freedom in our finite existence, and thus must balance our drive for individual freedom with our social duties. According to Hägglund, capitalism is opposed to this by constantly trying to increase our work time and reduce our free time. To counterbalance this, we need a form of democratic socialism that will “reduce, in the aggregate, socially necessary labor time and to increase socially available free time.”

Hägglund’s book, then, is a bipartite meditation on the uselessness of eternity and the need to accept our finitude, and then a set of ideological and political prescriptions on how to construct a society that takes our finitude on board. I’m not going to discuss this part: Wood talks heavily about Marx and Feuerbach, the architects of the kind of society Hägglund wants, and while this is interesting I’m not sure how convincing it is. Even Wood finds the author”s arguments for how to negotiate necessary labor with freedom unconvincing:

Rather than simply replace the realm of necessity with the realm of freedom—which would be impossible anyway, because there is always tedious and burdensome work to be done—we should be able to better “negotiate” the relationship between those realms. Hägglund gives an example of how this might be done when he talks about the way his own work on the book we are reading unites the two realms: writing “This Life” was labor, of course, but it was pursued as an end in itself, as a matter of intellectual inquiry. In a Hägglundian utopia, labor would be part of our freedom.

As Church Lady would say, “isn’t that convenient?” Academics like Hägglund already have that freedom. And Wood stresses the hypocrisy:

An ideal democratic socialism that harmonizes Hägglund’s idea of freedom with the state’s necessarily different idea of freedom will come to America, I guess, not just when the mountain comes to Muhammad but when the tenured academic willingly gives up his Yale chair for a job at New Haven’s Gateway Community College. Like many readers, I get anxious when literary academics use the verb “negotiate” at tricky moments; it forecloses argument, and seldom means actual negotiation. Indeed, Hägglund is unusually weasel-wordy when he concedes that such negotiation will demand “an ongoing democratic conversation.” That’s putting it optimistically.

Indeed. But let’s get to Wood’s criticism of New Atheism. Here’s some of it, channeled through Hägglund’s book (these are Wood’s words):

The problem with eternity is not that it doesn’t exist (Hägglund is uninterested in the pin dancing of proof and disproof) but that it is undesirable and incoherent; it kills meaning and collapses value. This is a difficult truth to learn, because we are naturally fearful of loss, and therefore attached to the idea of eternal restoration.

It’s clear that Wood isn’t interested in evidence, either, calling it “the pin dancing of proof and disproof”. But that’s bogus, for why would one reject eternity at all if you didn’t think that there was no evidence for it? If there were convincing evidence for a heaven, then surely we’d like to know about it and take it on board. If we knew that we would see our loved ones for eternity in some form or another (and yes, considering precisely what form gets you mired in the hinterlands of theology), we’d surely behave differently from how we do—perhaps mourning less when a loved one dies. Wood and Hägglund give plenty of evidence for literary figures showing the kind of mourning that seems inconsistent with a belief in eternity, including C. S. Lewis as well as writers like Primo Levi, Chekhov and Montaigne, but of course some mourning can still be consistent with belief in a heaven. After all, it may be some time before you see your loved ones again—if you even do. (If you believe in reincarnation, you won’t even remember them in the next life.)

It’s almost as if Wood (and Hägglund) don’t think evidence is even relevant to giving up religion: one can instead just say that the notion of heaven is incoherent, many people don’t act as if eternity exists, and therefore there are no gods.

But Wood is right that many religious people act as if this life is all they have. And he’s right that the notion of eternity as limned by various faiths isn’t something we’d really want. But he can’t help going after New Atheism and its dogged insistence on empirical evidence:

The great merit of Hägglund’s book is that he releases atheism from its ancient curse: its sticky intimacy with theism. Hägglund has no need for a parasitical relationship to the host (which, for instance, contaminates the so-called New Atheism), because he’s not interested in disproving the host’s existence. So, instead of being forced into, say, rationalist triumphalism (there is no God, and science is His prophet), he can expand the definition of the secular life so that it incorporates many of the elements traditionally thought of as religious.

This is an explicit criticism of New Atheism by Wood and an explicit rejection of the empirical argument made by people like Dawkins and Hitchens.  But again, that’s bogus. For, after all, why would you even be an atheist unless you were convinced, though a lack of evidence—or in the case of theodicy, positive evidence against a god—that gods and heavens didn’t exist? Only once you have dispensed with the idea of gods and heavens can you then buckle down and do the kind of work that Hägglund prescribes.

Note, too, that Wood calls New Atheism a form of “rationalist triumphalism” (a clear slur) and also gets in a lick against science when he implies that the New Atheist creed is “there is no God and science is His prophet”. This is unworthy of Wood and in fact inimical to his argument. I’d ask both Wood (who may be an atheist; I’m not sure) and Hägglund this question: “Why don’t you believe in gods, heaven or eternity?” I’d bet their answer would be “Because there is no evidence for them.” And presto, you’re talking about the arguments of New Atheists.

I see I’m running on here, and can leave the rest of the article to you, but I’ll give one more quote. Again we see Wood apparently agreeing with Hägglund that the trappings of religion may be valuable, or even necessary, for modern humans. There’s also a gratuitous slap at Dawkins, who is apparently the Great Satan of Atheism.

Feuerbach wanted to liberate human beings from their harmful self-deceptions, but Hägglund sees no imperative to disdain this venerable meaning-making projection, no need to close down all the temples and churches and wash them away with a strong dose of Dawkins. Instead, religious practice could be seen as valuable and even cherishable, once it is understood to be a natural human quest for meaning. Everything flows from the double assumption that only finitude makes for ultimate meaning and that most religious values are unconsciously secular. We are meaning-haunted creatures.

This is the old argument that humans need ceremony and bonding, and religion gives us that. My response is that the churches and temples of Scandinavia have been closed down for a long time, and the country is no worse for it. People find their ritual and meaning in many ways, and as the growth of secularism and of the non-churchy “nones” continues even more churches will close of their own accord. And don’t forget that those temples and churches don’t just provide comity: they are often divisive toward those of other faiths, and enforce a kind of morality that is far inferior to secular morality. Not to mention that they buttress the habit of faith: belief without substantial evidence.

The reader who called this article to my attention said that Wood’s piece was “very positive on atheism.” I’m not so sure, and it’s certainly not positive on New Atheism nor its reliance on empirical standards. But you be the judge. 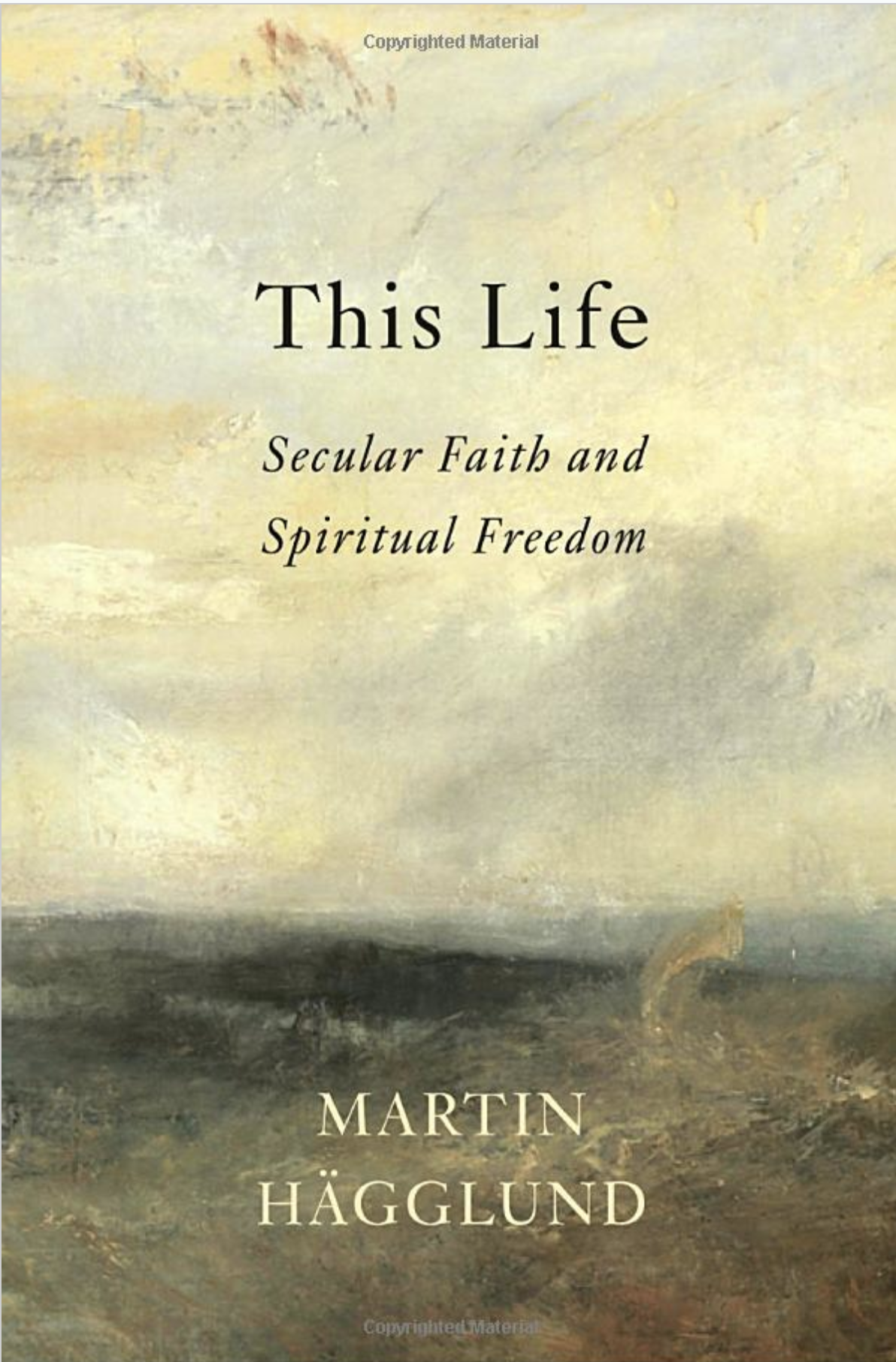 72 thoughts on “The New Yorker praises atheism (sort of)”