Williams College in Williamstown, Massachusetts has been considered one of the best places in America to get an education. As Wikipedia notes: “The college was ranked first in 2017 in the U.S. News & World Report‘s liberal arts ranking for the 15th consecutive year,  and first among liberal arts colleges in the 2018 Forbes magazine ranking of America’s Top Colleges.”

But I wonder how long this will hold. Under its previous President, Adam Falk, and its new President, Maud Mandel—both woke-compliant equivalents of Evergreen’s George “Invertebrate” Bridges—the College seems to have decided that socially engineering the school is a more important priority than giving its students a good education.

I’ll be reporting from time to time on the shenanigans there, but suffice it to say that many of students are strongly opposed to free speech (see my posts here and here); and minority students, who are treated perhaps better than in any college in America and many of whom are truly entitled and privileged, repeatedly and falsely claim that Williams is full of institutional racism and “violence” towards professors and students of color. There is absolutely no evidence for such violence; it’s a pure expression of Offense Culture. And—the death knell for Williams—a group of students are making the customary, largely ludicrous, and unconscionable demands to the College’s Trustees. If they give in, all is lost for Williams.

These demands include, as you can see from the students’ letter to the College Trustees below, a request for segregated housing, now given the euphemism “affinity housing.” If this continues, and if the trustees don’t show some spine (I fear the President has already surrendered hers), Williams will, like The Evergreen State College, become a place where parents don’t want to send their children. If some leadership isn’t exercised that pushes back against the relentless claims of victimhood by Williams students, then the school, among the richest colleges in America in per capita endowment, will start down the Evergreen Highway.

Here’s the new letter from a group of Williams students writing under the name of the Coalition Against Racist Education Now (click on the screenshot to go to the Google document website): 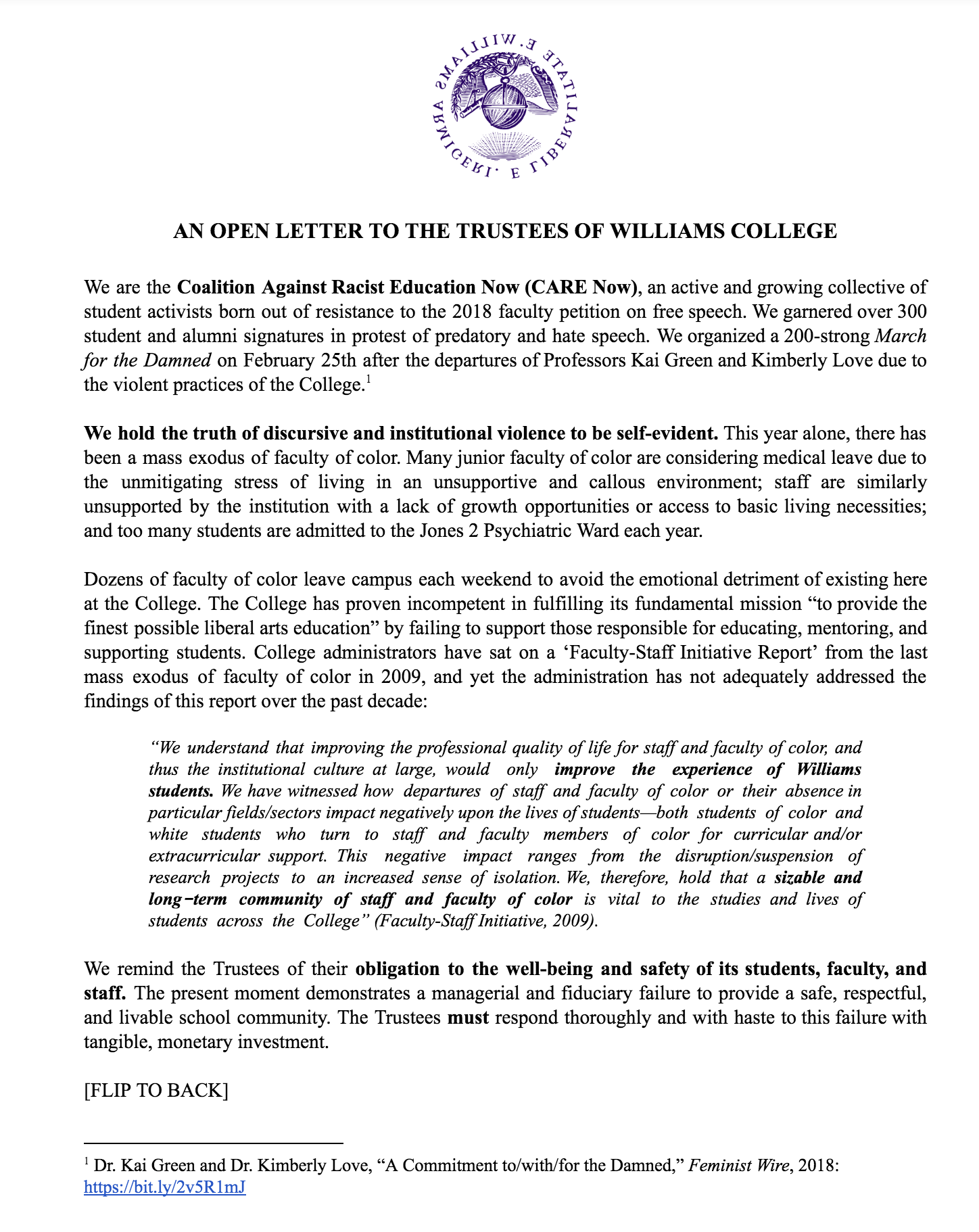 For more background on this letter, the unrest among the students and some of the faculty, and the persistent claims of violence, see this Google Drive folder on “Literature of the Damned,” including the editorial in the College’s newspaper by Tyler Tsay.

Let’s take the letter’s claims one by one, noting in passing that the second paragraph begins with a conceit that’s a riff on the Declaration of Independence. As I’ll show “the truth of discursive and institutional violence” is far from self evident, at least at Williams.

The opening sentence gives you the stand of CARE Now on free speech (their emphasis): “We are the Coalition Against Racist Education Now (CARE Now), an active and growing collective of student activists born out of resistance to the 2018 faculty petition on free speech.” You can see the 2018 free-speech petition here, which is basically a pretty innocuous call for Williams to adhere to Chicago’s Principles of Free Expression. That this motivated the opposition shows the censoriousness and authoritarianism of the Williams students who wrote to the trustees. It also bodes ill for the College to adopt any decent statement on free speech in the future.

Further, there has certainly not been a “mass exodus” of faculty of color from the campus. Two faculty, Kai Green and Kimberly Love, have taken medical leave, with Love having left by simply not showing up for class and abandoning her students without notice. In fact, this leave appears to be temporary, as both are scheduled to teach courses for this coming fall (see here and here). This is hardly a “mass exodus” of faculty of color!

Having read some writings of Green and Love (a good specimen is this article by the pair in The Feminist Wire) and having heard how hard the College has tried to accommodate the pair’s persistent and unreasonable requests for special privileges, the two appear to be unjustifiably aggrieved if not unhinged (see the article above as well as comment #4 at this site, a transcript of a truly bizarre Facebook narrative by Dr. Green).

Although the two claim they are victims of micro- and macroaggressions, and of violent practices by the College that make them unsafe, the only “violence” they describe is when a car mechanic—not affiliated with the College—was rude to them after their car broke down. Not only is this not evidence of racism at Williams, but it’s not even clear that the mechanic was a racist as opposed to just a jerk.

Nevertheless, rather than rebutting these risible claims, the Williams administration is bending over backwards to honor them, and a large group of students have almost beatified these two disturbed individuals, putting up shrines to them and holding them up as role models. This is a serious mistake on both fronts.

There have been a few reported instances of bigoted graffiti in the College over the past couple of years, but most of these appear to have been hoaxes. When the College investigates “hate crimes” and finds that they are hoaxes, often committed by minority students themselves, it deliberately does not announce the outcome of the investigations.

As most readers opined when I discussed this issue before, this is unconscionable. When a hate crime is reported and the perpetrator is found to be a bigot, the outcome would be announced, though not necessarily the name of the perpetrator. But when the crime proves to be a hoax, the College in effect acts as if the crime is unsolved and thus perpetuates an atmosphere of fear and distrust. This may be one reason the students claim that they feel “endangered.” Williams must announce the outcomes of all hate crime investigations and let people know whether they were hoaxes. They refuse to do this. This is a failure of nerve and a dereliction of duty.

There is not a scintilla of evidence I can find that Williams threatens the well-being of its minority students. But surely, by its deliberate inaction described above, the administration is contributing to student paranoia by not announcing the outcome of hate-crime investigations. Could it be that it’s in the College’s interest to allow such paranoia to continue? Could it be that the university wants to cover up the fact that “hate crimes” are hoaxes committed by members of the very group supposedly targeted by the crimes?

I have not been able to find evidence for the claims that “many junior faculty are considering medical leave due to the stress of living in an unsupported environment”. In fact, Williams tries very had to create a supportive environment for its minority students and staff. Nor do I know where the data about increased student admission to the psychiatric ward come from. Both claims may well be true, but of course student mental health issues are increasing across the board (Haidt and Lukianoff have an explanation for this). And it’s not clear whether these admissions occur because Williams is structurally racist and bigoted (there are no data on differential admission of students based on ethnicity), or, as the data show for the U.S., because of a general deterioration of student mental health—or at least an increase in visits to therapists and counseling services.

Nor have I found evidence that “dozens of faculty of color leave campus each weekend to avoid the emotional detriment of existing here at the College.” I’m aware that at least one minority faculty member lives in another city and commutes to the College, but the “mass exodus” seems like pure fantasy.

As for the 2009 report of the College, it does not show the “exodus” of faculty of color who, it’s implied, departed at a higher rate than did white faculty. Numbers for minority faculty are given in that report, but no comparative data. Here’s what the report says:

“according to the College’s official records, in the last 21 academic years (from 1989-90 to 2009-10), 20 full-time academic faculty members of African descent were hired by the College, seven of whom have left.”

But there is no comparison with white faculty, which is the crucial issue needed to support an accusation of structural racism.  After some digging, I found such a comparison in a 2014 update of faculty diversity and inclusion data. And it shows no difference between white and nonwhite faculty in retention, tenure, or departure from the College between 1990 and 2009. That’s good, no? 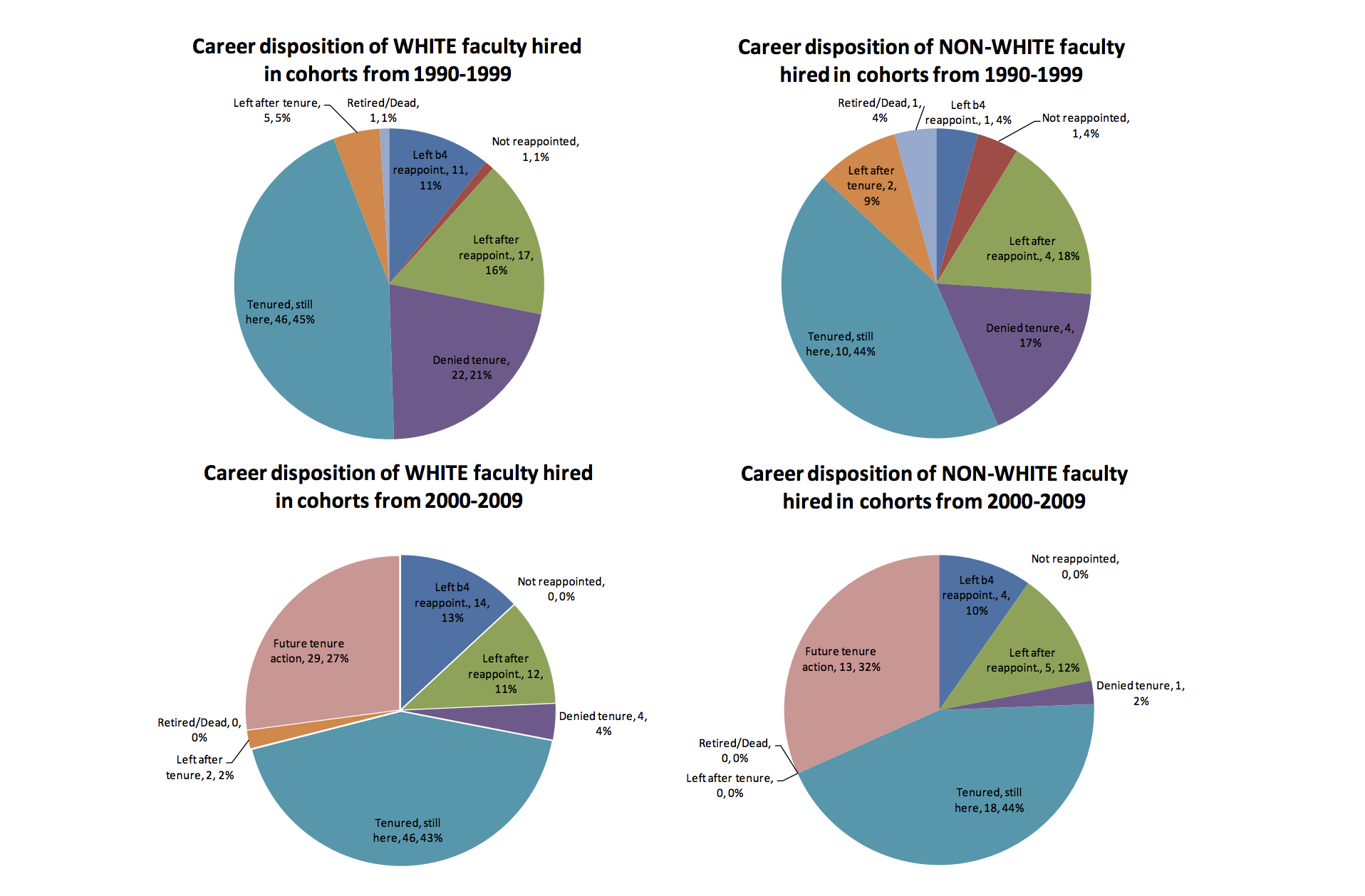 This gives the lie to the claim that Williams is unsupportive of faculty of color, who are said to leave at higher rates because of the College’s violence and bigotry. In fact, these graphs show the kind of equality of treatment for which Williams is striving. One can argue that each faculty member of color is still more valuable than white faculty, and their positions more onerous to replace, but that is an expression of bigotry. High quality faculty of color are prized hires in today’s job market, and may have many job offers.

Until the students and faculty are able to document exactly how the college is unsafe for minorities, and give genuine, tangible, and convincing instances of “violence,” and until they give transparent reports about the “hate crimes” that have been reported and investigated, I cannot sign on to the students’ claim that Williams is a racist, bigoted, and violent school. I remain baffled why some administrators and faculty distort the data to make it seem that way. If this is the case, it can only be the result of a culture of offense, which I think is developing at the school. In the end that culture will bring Williams—as it brought Evergreen State—to its knees.

Now come the students’ demands (note that they compel the Trustees to act): 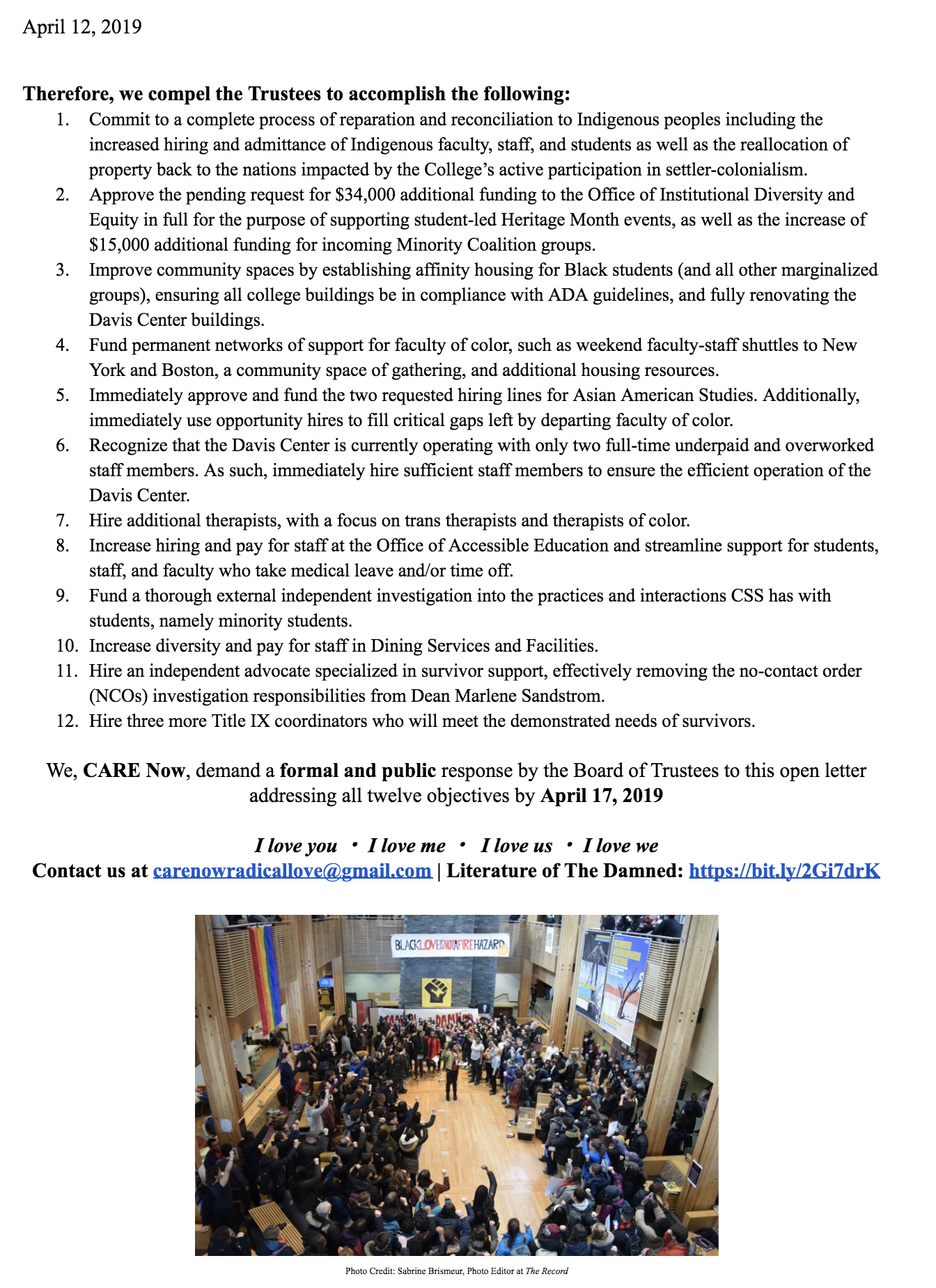 These demands include giving land back to Native Americans (to the Mohicans, who used to occupy that land but now occupy a reservation in Wisconsin?), more demands for hiring to accommodate the wishes of minority students and faculty, even though that has been going on at a rapid pace, the establishment of Asian American Studies, though there is already Asian Studies, and “weekend faculty-staff shuttles to New York and Boston.” They also demand “affinity housing” for Black students and other marginalized groups, which is segregated housing—probably a violation of the law since Williams gets federal funds. The students also demand three more Title IX coordinators, whose hiring is “to meet the demonstrated needs of survivors”. That is not what Title IX coordinators are for: they are there to enforce equal access of genders to education, and, in theory, to adjudicate incidents that violate it.

If Williams, its administration, and its trustees give in to these largely risible “demands,” and buy into the narrative—contrary to all evidence—that Williams is a place of structural racism and violence, the College will begin sliding down the slope to irrelevance. While all students and faculty, regardless of their gender and background, should be given equal opportunities, Williams is the most egregious case I know—save perhaps Evergreen State—of students distorting the nature of their environment to support a narrative of personal grievance.

I need hardly add that, while Williams College is weighing how to handle the free-speech issue, the “woke” students are denigrating free speech at every possible opportunity. Given the pusillanimous nature of the College administration, I predict that Williams will never approve the kind of free-speech policy outlined by the Chicago Principles of Free Expression. And shame on them if they don’t.