Well, the roof of Notre Dame collapsed in the fire and the damage is horribly severe. There’s a timely report at The New York Times (click on screenshot below):

They still don’t know how the fire started, but here’s what the NYT says:

André Finot, a spokesman for the cathedral, said in a telephone interview that the cause of the fire remained unknown, and there was no immediate indication that anyone had been hurt.

“It’s not about the faith — Notre-Dame is a symbol of France,” said Emmanuel Guary, a 31-year-old actor who was among a huge crowd amassed on the Rue Rivoli, on the Right Bank. Many had tears in their eyes.

After part of the spire collapsed, the fire appeared to spread across the rooftop, where the growing flames licked the sky and projected a yellow smoke over the horizon.

. . . The French police rushed in and started blowing whistles, telling everyone to move back, witnesses said. By then, the flames were towering, spilling out of multiple parts of the cathedral. Tourists and residents alike came to a standstill, pulling out their phones to call their loved ones. Older Parisians began to cry, lamenting how their national treasure was quickly being lost.

. . .Vincent Dunn, a fire consultant and former New York City fire chief, said that fire hose streams could not reach the top of such a cathedral, and that reaching the top on foot was often an arduous climb over winding steps.

Apparently they couldn’t do a forest-fire-like drop of water from the air, as that, they say, might have caused the entire edifice to collapse. There will be plenty of recriminations in the next week. I’m just unspeakably sad. Yes, it was a religious structure, but that doesn’t detract from its historical significance, its beauty, and the emotional effect it has on many (including me).

The pictures and videos below show the fire in the interior, and that probably means that the stained-glass windows, the choir, and other works of art are destroyed. It will never be the same again.

#NotreDame: 'The roof has entirely collapsed, there are flames coming out the back of the cathedral as if it was a torch'@charli, Journalist at France 24, at the scene of the fire. pic.twitter.com/2B0IrMiDcL 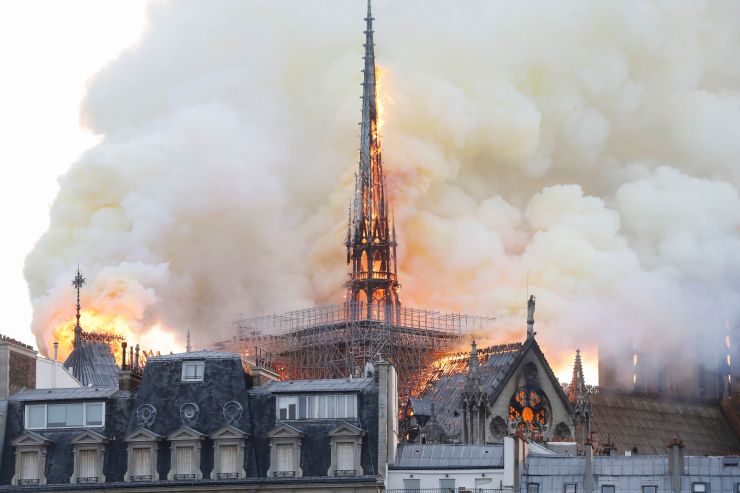 This is such a sad picture: