This is what we’re in for the foreseeable future: a Supreme Court whose conservative majority, while concerned with preserving the life of every fetus, sends criminals to their deaths with impunity, even when those deaths are horribly painful. As the article below in The Atlantic relates (click on the screenshot), Justice Neil Gorsuch, who heretofore had kept his opinions on capital punishment private, joined the 5-4 Supreme Court majority (5-4 is temporary; it will be 6-3 before too long unless we elect a Democratic President in 2020) in the case of Bucklew v. Precythe, a ruling you can see here. The opinion was in fact written by Gorsuch, with the other four conservative justices (including Kavanaugh) concurring. The dissenters were, of course, Ginsburg, Kagan, Sotomayor, and Breyer.

Russell Bucklew, facing execution in Missouri for murder, rape, assault, escape, and other crimes, appealed because he has a disease called cavernous hemangioma, which in his case produces fragile blood-filled tumors in his head and mouth. He can’t sleep lying down lest he choke on his own blood, and it’s possible, even likely, that a lethal injection, the standard procedure in Missouri, would cause insupportable pain by rupturing his blood vessels.

But Gorsuch et al. didn’t buy it. In an astounding ruling, they demanded that Bucklew not just specify the use of nitrogen (remember, it’s already approved by the state as an alternative method of execution), but do a lot more. From the ruling:

First, an inmate must show that his proposed alternative method is not just theoretically “‘feasible’” but also “‘readily implemented.’” Glossip, 576 U. S., at ___–___ (slip op., at 12–13). This means the inmate’s proposal must be sufficiently detailed to permit a finding that the State could carry it out “relatively easily and reasonably quickly.” McGehee v. Hutchinson, 854 F. 3d 488, 493 (CA8 2017); Arthur v. Commissioner, Ala. Dept. of Corrections, 840 F. 3d 1268, 1300 (CA11 2016). Mr. Bucklew’s barebones proposal falls well short of that standard. He has presented no evidence on essential questions like how nitrogen gas should be administered (using a gas chamber, a tent, a hood, a mask, or some other delivery device); in what concentration (pure nitrogen or some mixture of gases); how quickly and for how long it should be introduced; or how the State might ensure the safety of the execution team, including protecting them against the risk of gas leaks.

Why is that stuff Bucklew’s responsibility? It’s the State of Missouri’s responsibility, since it approved nitrogen as an approved method of execution! Author Epps also singles out two other barbaric aspects of the majority ruling:

Gorsuch’s opinion has two even more important malignant flaws. For at least 60 years, the Supreme Court has consistently held that the ban on “cruel and unusual punishments” is not limited to the ideas prevalent in the 18th century (when crimes were sometimes punished by hanging, whipping, branding, and even mutilation). Instead, in a 1958 case called Trop v. Dulles, the Court said that “the words of the Amendment are not precise, and … their scope is not static”; instead, it “must draw its meaning from the evolving standards of decency that mark the progress of a maturing society.” This is a hugely important precedent, invoked dozens of times since then. It has led to such decisions as forbidding execution for rape (employed in the South into the 1960s) and execution of those who commit crimes as children or who become mentally ill while waiting to die. It is nothing less than vital to protecting American society from the growing clamor for barbaric treatment of the powerless.

But the majority opinion pretended that Trop did not exist, instead turning to a repellent discussion of how much it hurt to be hanged in the 18th century (rather a lot, apparently) and whether drowning in your own blood is really all that much worse.

In the next section of the opinion, Gorsuch suggested that the real problem with death-penalty jurisprudence is those pesky people who just won’t get aboard the gurney. The Court’s inconvenient involvement in death cases, he wrote, could be reduced if the federal courts begin “invoking their equitable power to dismiss or curtail suits that are pursued in a ‘dilatory’ fashion or based on ‘speculative’ theories.”

And indeed, you can sense the petulance of these death-mongers in the Court’s opinion, which suggests that it’s indeed time for Bucklew to mount the gurney, even if it results in cruel and unusual punishment: 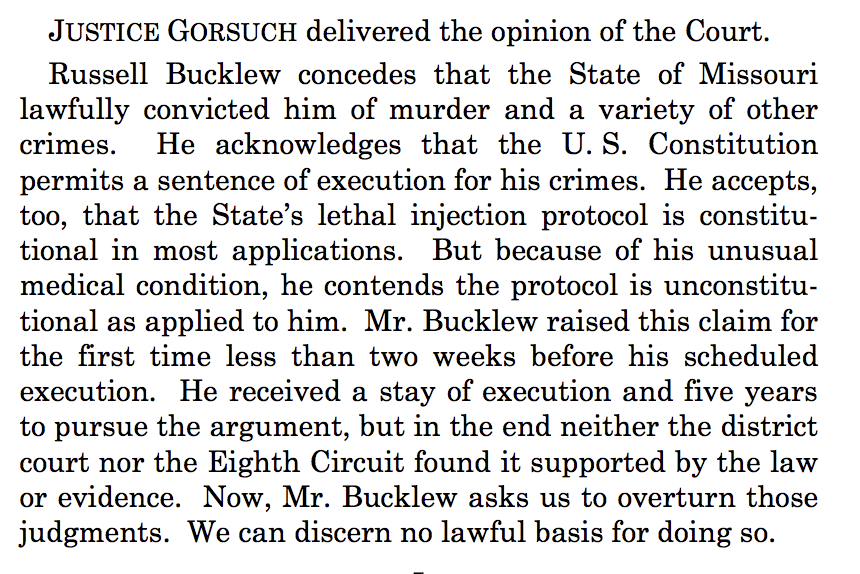 You know my view on capital punishment: I oppose it because it offers no alternative over life in prison, with or without parole: it’s neither a deterrent nor does it allow for rehabilitation or keeping criminals sequestered (compared to jailing them). It’s retributive punishment. And if a convicted person is later found to be innocent, having killed them can’t right the wrong. In this case the execution is doubly wrong, for it’s likely to be cruel and unusual punishment, and yet the Court refuses to even consider means of execution that are less painful.  The majority is without empathy. At long last, gentlemen, have you no decency?

156 thoughts on “Supreme court approves execution with a substantial likelihood of causing agony (vote, naturally, was 5-4)”