The evolution of whales from a small, deer-like artiodactyl took about ten million years: from about 50 million to about 40 million years ago. That’s remarkably fast evolution, especially when you consider the amount of morphological and physiological change that occurred, and the fact that the divergence between chimps and modern humans from their common ancestor, which (I think) took far less morphological and physiological change, took more than 6 million years.

Fortunately, we have a good fossil record of whales from Egypt, Pakistan and intervening areas, and so we can document this rapid change. Although the closest living relative of whales are hippos, the ancestor of modern cetaceans might have looked something like the first photo below, a reconstruction of the fossil Indohyus,  a terrestrial, raccoon-sized artiodactyl (note hooves) similar to the modern chevrotain (“mouse deer”), which is known to stay underwater for long periods to escape predators.

Here’s a living chevrotain, the Lesser mouse-deer (Tragulus kanchil). It’s hard to imagine that something like this could evolve into the mighty whale! 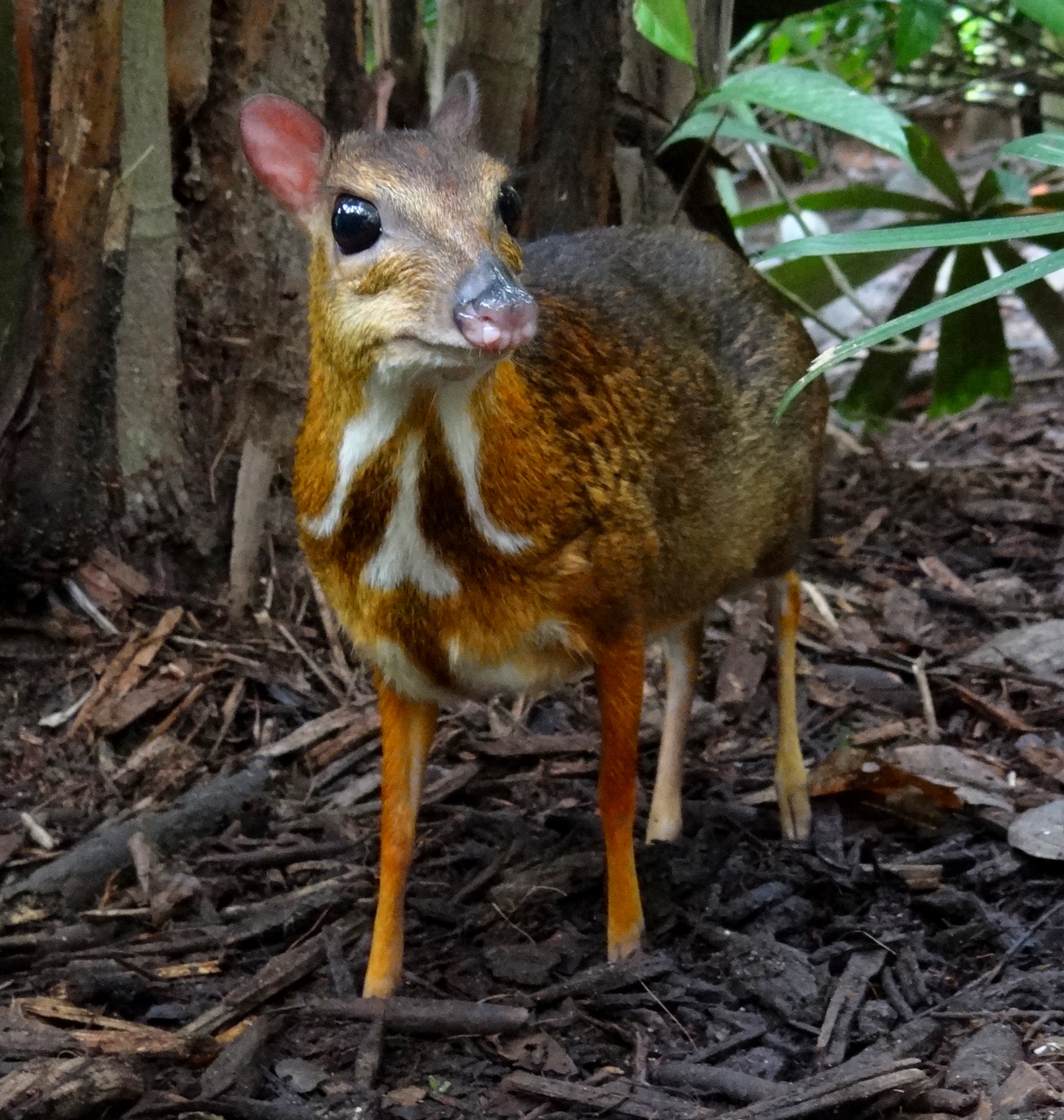 At any rate, a new paper in Current Biology by Oliver Lambert et al. documents a transitional form between ancient and modern whales, a species they name Peregocetus  pacificus, dating from about 43 million years ago. It was found not in the Middle East but in Peru, and so also provides information about how whales colonized the Atlantic Ocean after their presumed origin off Southeast Asia. You can read the paper for free by clicking on the screenshot below, or by getting the pdf here. If somehow your access is blocked, judicious inquiry will get you a pdf.

This “whale” (if it can be called that) was dug up on the southern coast of Peru, with a large proportion of its skeleton remaining (see below; solid lines are recovered bones). From this skeleton we can conjecture that it was amphibious—it could swim and also walk on the land. Here’s the tally of found bones, and a reconstruction of how they were used to both swim and walk. As you can see from the scale, it was about 4 meters long:

Why do we think it could swim? Peregocetus had a well-formed pelvis, attached to the rest of the skeleton, and well formed legs that would have stuck well outside the body.  It had a long tail, and the configuration of the tail vertebrae, compared to those of other swimming mammals like otters and beavers, suggest that the tail was somewhat paddle-like, powerful, and thus could be used for swimming. (This is seen in the reconstruction at the bottom.). It’s not known if the tail ended with a boneless “fluke” (as in modern whales), as that would not have been preserved.

The rear feet were long, as were the rear digits, and those digits were flattened with flanges on the side, indicative of webbed rear feet. Based on the foot anatomy, the authors suggest that “Propulsive movements were either alternate or simultaneous hind-limb paddling or body and tail undulations, as observed in modern river and sea otters, alternating between lift-based propulsion via pelvic undulations, including tail and hind limbs, and drag-based propulsion via independent strokes of the hind limbs.”

Here’s the distal part of the front leg:

Here’s the rear foot with flattened digits (I believe “3” are the hooflets):

Why do we think it could walk? I’ll quote the authors here: “The fore- and hind-limb proportions roughly similar to geologically older quadrupedal whales from India and Pakistan, the pelvis being firmly attached to the sacrum, an insertion fossa for the round ligament on the femur, and the retention of small hooves with a flat anteroventral tip at fingers and toes indicate that Peregocetus was still capable of standing and even walking on land.”

What else is interesting about this fossil? It had sharp and robust teeth, some shearing teeth, and a long snout, indicating that it probably ate large bony fish. Here is a mandible with teeth:

Further, this fossil suggests to the author a route for migration of ancestral whales from their origin in the Pacific to the Atlantic Oceans and into the New World.

Based on recent finds of whale fossils in West Africa, as well as this find from Peru, the authors suggest that whales made their way through the Tethys sea (the Mediterranean, which was contiguous with the Indian Ocean then), south along the West African coast, then hopped over the South Atlantic (much narrower at that time due to continental drift) along the coast of South America and then south through the Isthmus of Panama (open to the sea then) to get back to the eastern Pacific. It also is thought to have spread north along the east coast of North America. Below you can see the route of migration, with the authors’ hypothesis denoted by the black arrows below. (A trans-Pacific route can’t be ruled out, but the Pacific was much wider then and there are no early whale fossils on the Pacific coasts.)

Finally, here’s a reconstruction of the beast on land and see from the paper’s Supplemental Information:

Here we have a true intermediate form, a transitional species which occurs when it’s supposed to: after the earliest whales but before the appearance of modern whales. Given this find, as well as the panoply of other fossil whales showing progression from ancestral to modern forms, creationists will be hard pressed to explain this.

48 thoughts on “A 43 million-year-old transitional form: an amphibious whale”