Blurbs on books are usually selected by the publisher, but they’re always, at least in my experience, vetted by the author. Here, sent in a comment by reader Michael, is a reproduction of the back cover of ID-creationist Michael Behe’s new book, Darwin Devolves: The New Science About DNA that Challenges Evolution (you can also see these quotes on the Amazon site): 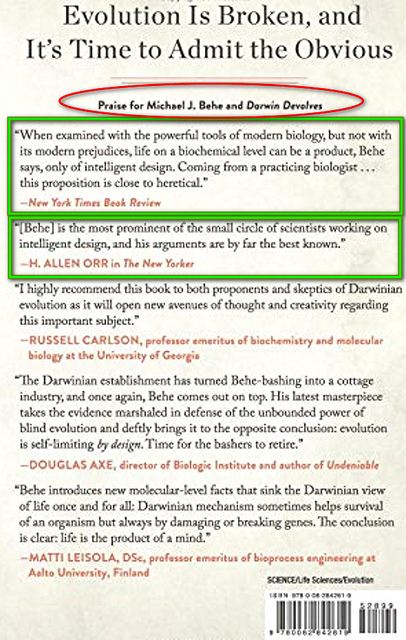 Note that there are two respectable reviewers here : my first student Allen Orr (now a professor at Rochester) and James Shreeve, Executive Editor for Science at National Geographic (Axe and Leisola and Carlson are IDers themselves and either creationists or affiliated with the Discovery Institute). Did Orr and Shreeve really praise Behe? Of course not: these are statements taken out of the context of the full review of Darwin’s Black Box.  Creationists, of course, are good at that. First they take biologists’ scientific statements out of context, making them seem as if they’re favoring ID, and now, in book blurbs, they blatantly pretend that Orr and Shreve are praising Behe. Let’s look at the sources of the quotations.

Here’s Orr’s review of ID and Behe’s views in the New Yorker in 2005 (click on screenshot), and the quote Behe and HarperOne (the publisher) use is below it: 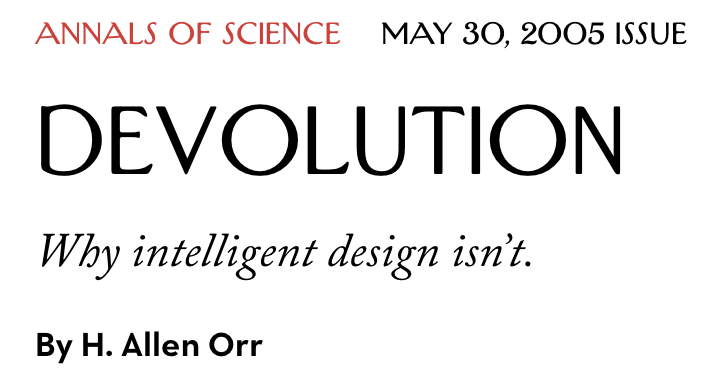 The quote on the book cover:

Michael J. Behe, a professor of biological sciences at Lehigh University (and a senior fellow at the Discovery Institute), is a biochemist who writes technical papers on the structure of DNA. He is the most prominent of the small circle of scientists working on intelligent design, and his arguments are by far the best known.

What you don’t see from the excerpt is that Orr’s piece completely dismantles Behe’s Argument for Design from Irreducible Complexity (as well as Dembski’s “No Free Lunch” argument), so the publishers are pretending that Orr liked Behe’s work. I’ll let you read the New Yorker article for yourself to see how Orr demonstrates why Behe’s arguments for a Designer aren’t dispositive because there are always Darwinian alternative pathways, even though we may not know which one was taken. As always, the ID tactic that when you don’t understand how something evolved, to punt and say, “Well, that means God did it”, is simply a dumb and unproductive program. Where’s the independent evidence for God, or, in Behe’s cynical euphemism, “The Intelligent Designer”? Absent that, ID is an ungrounded speculation, rightly rejected by Judge John Jones as Christianity in disguise. 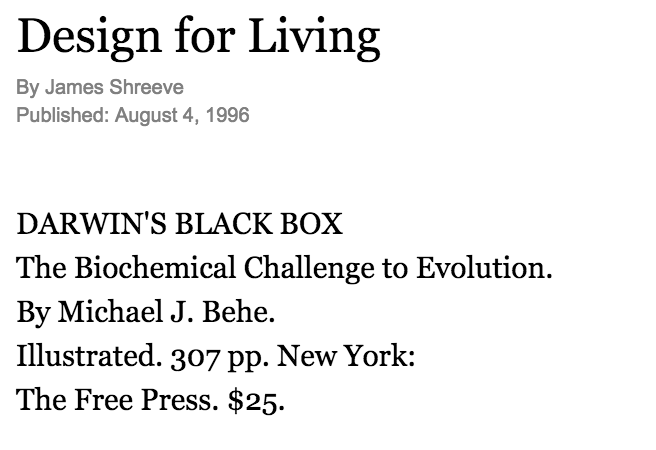 In ”Darwin’s Black Box: The Biochemical Challenge to Evolution,” he argues that the origin of intracellular processes underlying the foundation of life cannot be explained by natural selection or by any other mechanism based purely on chance. When examined with the powerful tools of modern biology, but not with its modern prejudices, life on a biochemical level can be a product, he says, only of intelligent design. Coming from a practicing scientist — he is a biochemist at Lehigh University — this proposition is close to heretical.

Unlike Orr, Shreeve is not a working biologist, but he still sees the problem of punting to God in our ignorance (he does tout complexity theory, despite the fact that, as Orr notes, good old natural selection provides plausible means for the evolution of systems that look irreducibly complex):

Mr. Behe may be right that given our current state of knowledge, good old Darwinian gradualist evolution cannot explain the origin of blood clotting or cellular transport. It doesn’t provide a mechanism for genetic inheritance either – but does that mean that James Dewey Watson and Francis Crick, who discovered the structure of DNA, shouldn’t have gone looking for one? Before an investigator declares the cell to be God’s last holdout, he must consider other natural causes for the origin of biochemical complexity, including the spontaneous organization of componenets [sic] suggested by complexity theory itself. Mr. Behe remarks on the vagueness of complexity theory itself. Mr. Behe remarks on the bagueness [sic] of complexity theory today – a curious charge, coming from a creationist – but what about its future, or that of paradigms as yet unconceived? Shouldn’t we leave something for our children and grandchildren to puzzle out besides which systems int he cell are intelligently designed and which are not? Because something is beyond our understanding today does not mean it will be beyond theirs.

HarperOne, the religious branch of HarperCollins Publishing, used the New Yorker and NYT quotes just to give an aura of authority to Behe’s work: “look, he was praised by the fancy New York media”. But he wasn’t, and if you read the full reviews you’ll see that neither reviewer accepts Behe’s contention that things that look (to Behe) irreducibly complex must have been the product of a Great Mutagenic Designer.

Only somebody who was intellectually dishonest would sanction the use of these misleading blurbs on their book. But of course Behe and the Discovery Institute are very anxious for this book to do well (it isn’t) because they see it as a pathway to public and scientific acceptance of Intelligent Design. Too bad they’re wrong.

34 thoughts on “Behe and his publisher distort his reviews, pretend that they praise his work”