As you know, to become a saint in the Catholic pantheon a candidate has to have performed two documented miracles, which are ostensibly debated in the Vatican after being stink-eyed by a hired nay-sayer, the literal “Devil’s Advocate“. (Hitchens was the Advocatus Diaboli for Mother Teresa’s canonization, but apparently they didn’t find him convincing.)

Now, according to the BBC and other sources (click on screenshot below), the second critical miracle has been approved for John Henry Newman, and so he’s on the fast track to sainthood—the first English saint in a long while. Newman (1801-1890) began as an Anglican and then, converting to Catholicism, became a cardinal and was beatified nine years ago (that’s step 1, which requires only one miracle).

The first miracle was “curing a man’s spinal disease.” Wikipedia says this about the pair:

In 1991, Newman was proclaimed venerable by Pope John Paul II, after a thorough examination of his life and work by the Congregation for the Causes of Saints.  After this, Jack Sullivan, a man studying for the diaconate in Boston, Massachusetts, was on the verge of complete paralysis in 2000 and 2001 and claimed to have been miraculously healed after praying to Newman. The miracle was investigated and confirmed by the Vatican. Newman was beatified on 19 September 2010 by Pope Benedict XVI on a visit to the United Kingdom.

A second miracle, necessary for his canonisation, was approved by the Vatican in November 2018. This miracle concerned the healing of a pregnant American woman from a life-threatening condition. The decree approving this miracle was authorized to be promulgated on 12 February 2019. 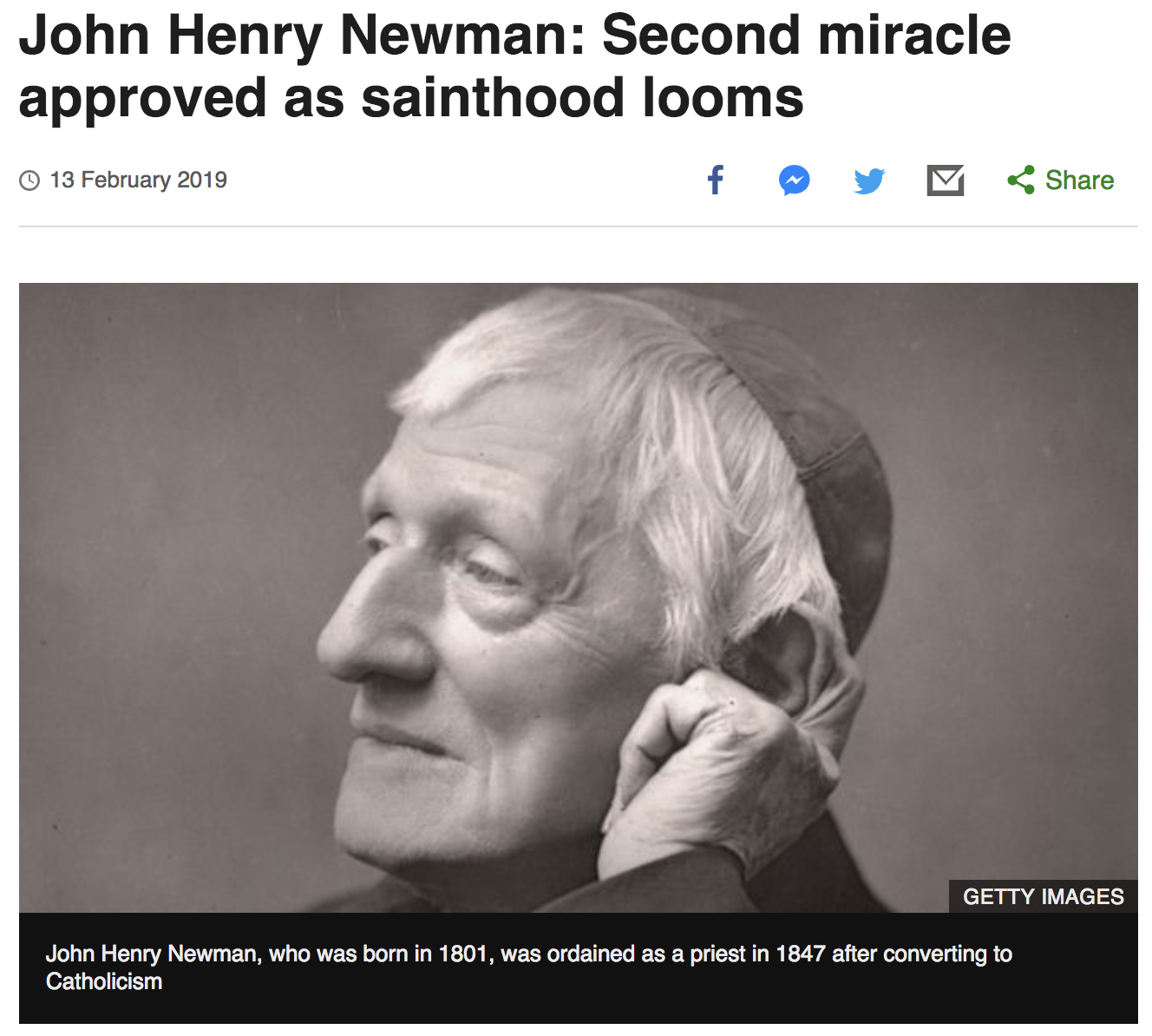 The Torygraph gives a bit more information about this second miracle:

The Church claims the recovery had no scientific explanation and attributed it to Newman’s intercession.

“An expectant mother was suffering from unstoppable internal bleeding which threatened the life of her child in the womb,” the diocese of Westminster said on its website.

“She had long been a devotee of Blessed John Henry, and in prayer she directly and explicitly invoked Newman’s intercession to stop the bleeding. The miraculous healing was immediate, complete, and permanent.”

So I wrote my doctor asking if there are known natural causes for stopping internal bleeding during pregnancy, and of course there were. As the doc wrote me (my emphasis):

The devil is in the details. There are many causes of uterine bleeding during pregnancy.

Here’s just one from UpToDate:

Threatened miscarriage. Uterine bleeding in the presence of a closed cervix and sonographic visualization of an intrauterine pregnancy with detectable fetal cardiac activity is diagnostic of threatened miscarriage. The term “threatened” is used to describe these cases because miscarriage does not always follow uterine bleeding in early pregnancy, even after repeated episodes or large amounts of bleeding. In fact, 90 to 96 percent of pregnancies with both fetal cardiac activity and vaginal bleeding at 7 to 11 weeks of gestation do not miscarry; the higher success rate is associated with bleeding at the later end of the gestational age range [10,11]. Uterine bleeding in these cases is likely due to disruption of decidual vessels at the maternal-fetal interface. These separations generally cannot be visualized by ultrasound, but sometimes appear as a subchorionic hematoma. Management is expectant.

“Management is expectant” means the bleeding usually stops on its own. Hope that helps.

Yes, it helps. So what we have here is a “miracle” that occurs regularly without the intercession of prayers to saints. But of course that characterizes all the medical miracles touted by the Vatican. When an amputee regrows an arm after praying to a beatified candidate, then we’ll talk!