Seriously? A public-school musical play about evolution got canceled in England? And because religious parents complained? That’s not supposed to happen!

Here are the stories from the BBC and The Independent (click on screenshots to read):

Note that the musical was written by a Christian.

A school has axed a musical on evolution over its suggestive lyrics and portrayal of Christian views.

Darwin Rocks, about the scientist Charles Darwin, was due to be performed by about 90 pupils at Hartford Manor Primary School, Cheshire, next month.

The move follows six “expressions of concern” from parents, the school said.

The musical’s publishers Musicline said it was written by a Christian, adding “we can’t ever recall having courted controversy before”.

The play has been performed for two years without a complaint, but the lyrics and the treatment of a bishop—Bishop Samuel Wilberforce, according to The Independent—riled up some parents. The BBC continues

According to its website, the production is a “light-hearted look” at the work of Darwin, whose theory of evolution, published in 1859, shocked Victorian society by suggesting animals and humans shared a common ancestry.

Head teacher Simon Kidwell told the BBC that the school, in Hartford near Northwich, received six “expressions of concern” over lyrics that refer to “bump and grind” – a sexually suggestive dance move.

He said three of those parents also believed a bishop was “mocked” in a separate scene.

“There were concerns about caricature,” he said, adding the complainants, who include a science teacher from another school, felt its representation of Christian views on science “wasn’t accurate”.

One parent said they did not want their daughter to think her ambition to be an engineer contradicted Christian beliefs, Mr Kidwell said.

He added the school board was not involved in the decision to drop the production and denied newspaper suggestions a local vicar who is on the board had influenced the move.

If you want, you can go to the “Darwin Rocks” website and listen to some of the songs yourself. As for me, I’m off to O’Hare so I don’t have time.

What bothers me is that there’s censorship of evolution because of Christian offense, and I’m not at all sure that censorship is justified. And, of course, Bishop Wilberforce is reported to have embarrassed himself in the famous 1860 Oxford debate on evolution. Lots of people, including Huxley, are supposed to have made fun of Wilberforce, including Benjamin Disraeli, whose comments about Wilberforce’s unctuous nature led to his nickname “Soapy Sam.”

What bother me almost as much—or perhaps even more, is that the BBC saw fit—at the end of this report, to stick in some accommodationist editorializing by the religion editor. Good lord!—have a look at this “analysis”. 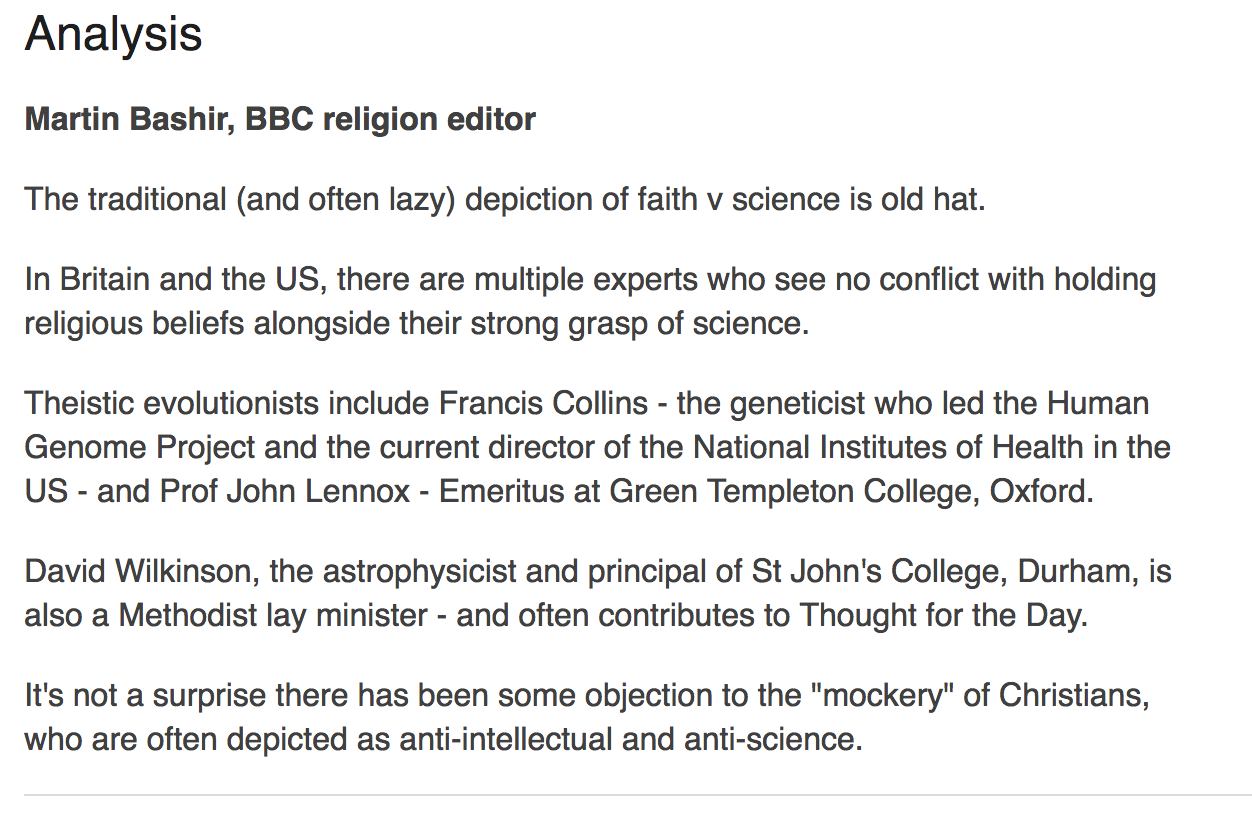 What the bloody hell does this have to do with a news article? It’s just the same tired old trope that because there are religious scientists, there isn’t conflict between science and religion. But the very article above this pathetic bit of apologetics shows that, in the case of this play, there is a conflict between faith and science. If there were no religion, there would be no opposition to evolution.

And why did the BBC let the religious camel stick its nose in the tent? Can’t somebody complain about this?