I’ve long argued that today’s music sucks, well aware that for saying this I’ll be accused of being a curmudgeon who simply likes his generation’s music and can’t make way for the innovations of the new kids.

My response to that accusation is threefold: that there are no groups today that even begin to rival the great groups of the Sixties, including the Beatles, the Doors, Santana, and so on; that oldies stations twenty years from now will still be playing the Beatles and not Maroon 5 or Ariana Grande; and that somebody had to live through the era of the most innovative rock and pop music that existed, and those people just happen to be me and my peers.

I’ve also defended my views in a very popular post comparing the top-selling songs of my day and these days (see also here). There was no comparison: look at the lists of the top 20 Billboard songs.

But now we have more objective measures of rock quality. Below is a new article from the New York Times claiming that today’s songs are louder and having a more compressed dynamic range compared to rock songs of yore and also (a more arguable claim) that people easily tire of loud, compressed music. There are other articles (I won’t list them all) showing that using various indices, pop music has become worse on a number of fronts. One website lists 5 studies that were themselves summarized by the BBC. The SCIENTIFIC RESULTS:

1. Pop music has become slower — in tempo — in recent years and also “sadder” and less “fun” to listen to.
2. Pop music has become melodically less complex, using fewer chord changes, and pop recordings are mastered to sound consistently louder (and therefore less dynamic) at a rate of around one decibel every eight years.
3. There has been a significant increase in the use of the first-person word “I” in pop song lyrics, and a decline in words that emphasize society or community. Lyrics also contain more words that can be associated with anger or anti-social sentiments.
4. 42% of people polled on which decade has produced the worst pop music since the 1970s voted for the 2010s. These people were not from a particular aging demographic at all — all age groups polled, including 18-29 year olds, appear to feel unanimously that the 2010s are when pop music became worst. This may explain a rising trend of young millennials, for example, digging around for now 15-30 year-old music on YouTube frequently. It’s not just the older people who listen to the 1980s and 1990s on YouTube and other streaming services it seems — much younger people do it too.
5. A researcher put 15,000 Billboard Hot 100 song lyrics through the well-known Lev-Zimpel-Vogt (LZV1) data compression algorithm, which is good at finding repetitions in data. He found that songs have steadily become more repetitive over the years, and that song lyrics from today compress 22% better on average than less repetitive song lyrics from the 1960s. The most repetitive year in song lyrics was 2014 in this study.

Conclusion: There is some scientific evidence backing the widely voiced complaint — on the internet in particular — that pop music is getting worse and worse in the 2000s and the 2010s. The music is slower, melodically simpler, louder, more repetitive, more “I” (first-person) focused, and more angry with anti-social sentiments. The 2010s got by far the most music quality down votes with 42% from people polled on which decade has produced the worst music since the 1970s.

The icing on the cake: here’s the Billboard Top 10 from exactly 50 years ago (Feb. 8, 1969; sadly, #1, not shown, is “Crimson and Clover”, a pseudopsychedelic snoozer by Tommy James and the Shondells): 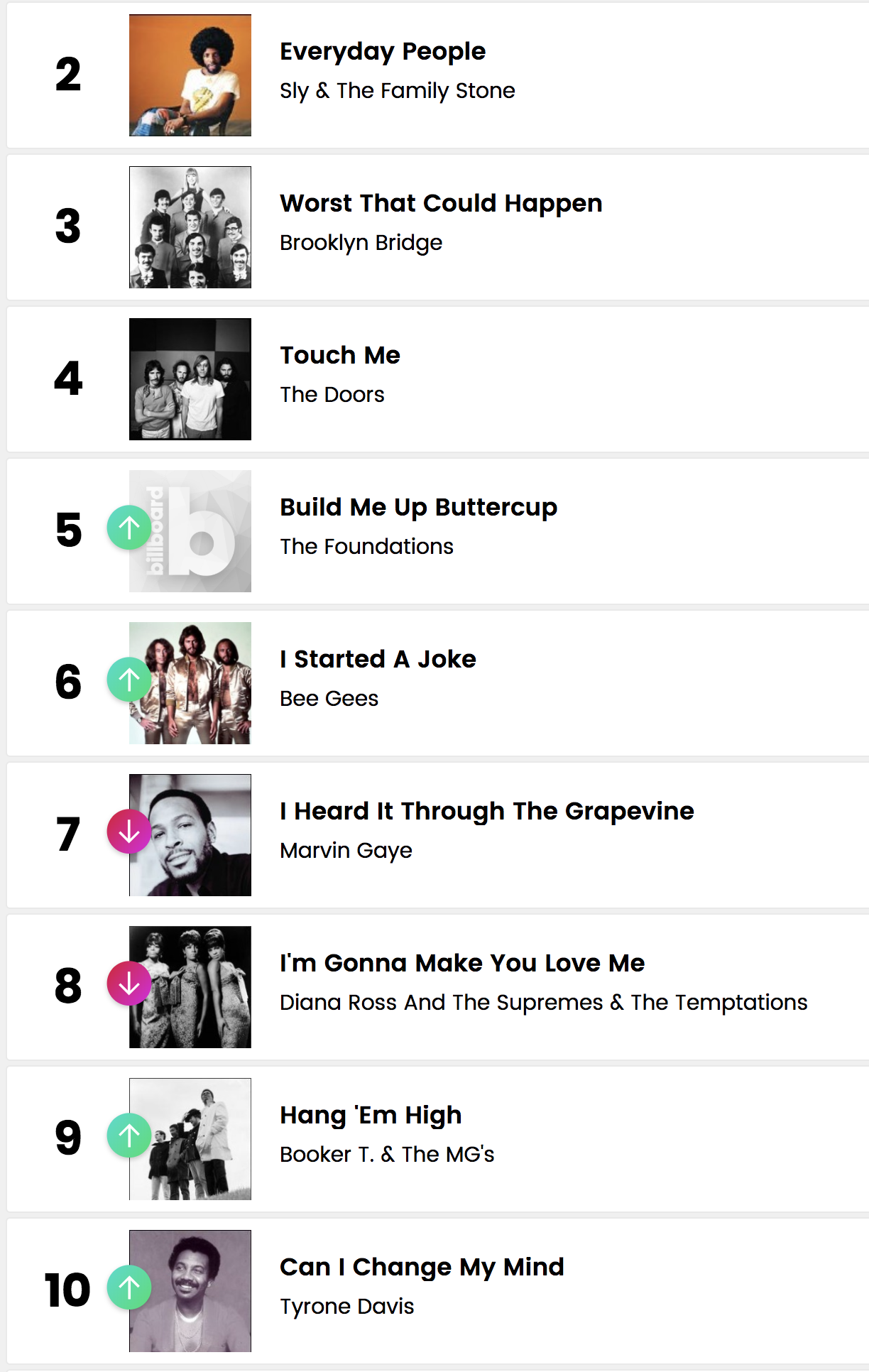 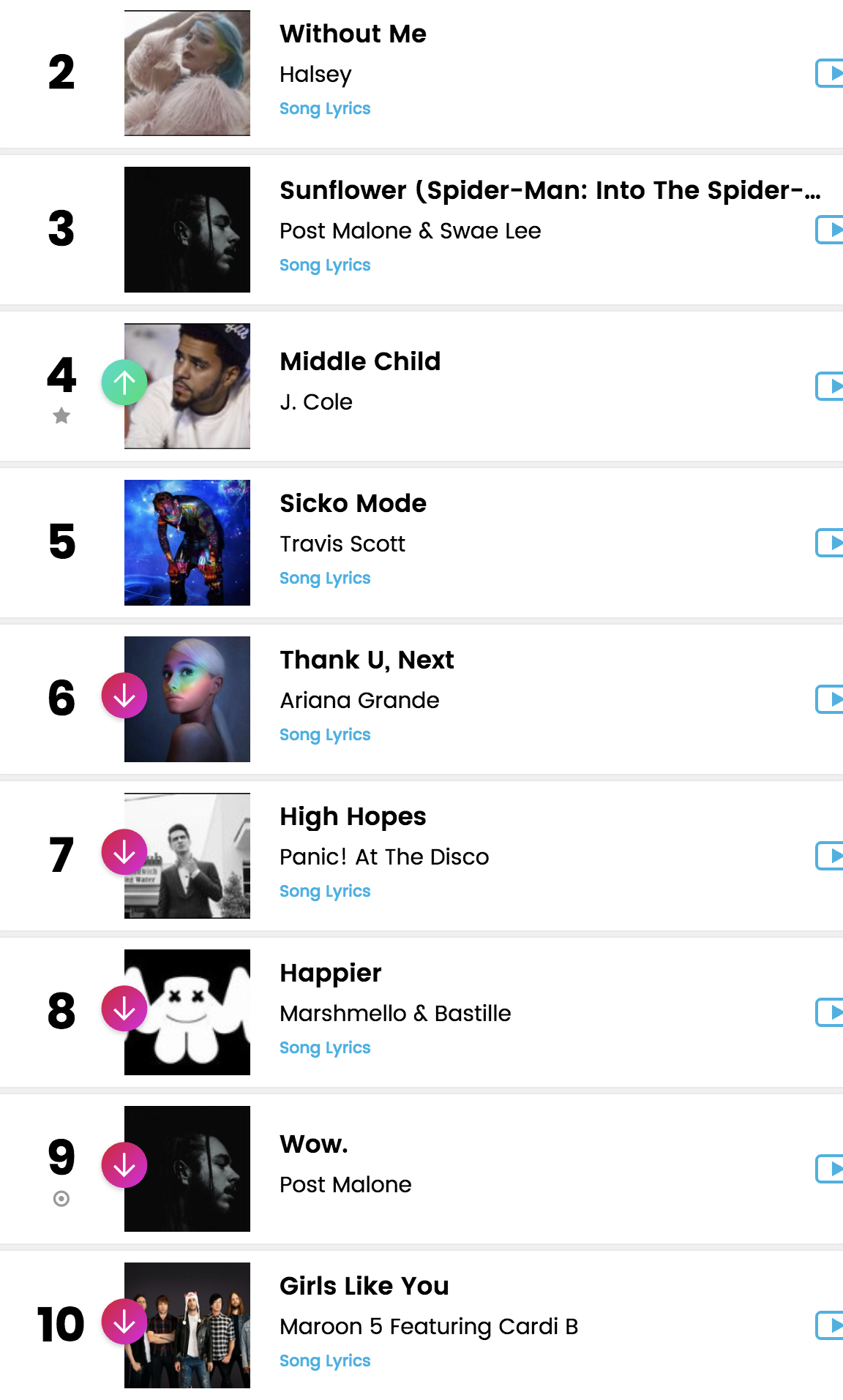 There are at least three classics in the 1969 list: “I heard it through the grapevine,” “Touch me” (my favorite Doors song), and “I’m gonna make you love me.” But “Worst that could happen,” “I started a joke,” and “Everyday people” are no slouches in the song department, either.

Is there any song on today’s list that will last like the ones from 1969? I doubt it.

So get off my lawn!