n.b. Grania has contributed to this post as I am leaving early.

Well, if you read this after 10 a.m. Chicago time, I’ll be winging my way nonstop to Hawaii—a 9.5 hour flight. It’s the fourth day of Coynezaa: Friday, December 28, 2018, with two days to go. (It’s also the fourth day of the Twelve Days of Christmas, but the religious holiday is trivial in comparison.) It’s also National Boxed Chocolates Day, and I’ll eat them all, boxed or unboxed. If they wanted to have such a food day, they should have put it on Boxing Day.

Those who died on December 28 include

Meanwhile in Dobrzyn, Hili has a Great Notion:

A: I see that you have a great idea.
Hili: Yes, I’m going to jump up on this little tree. 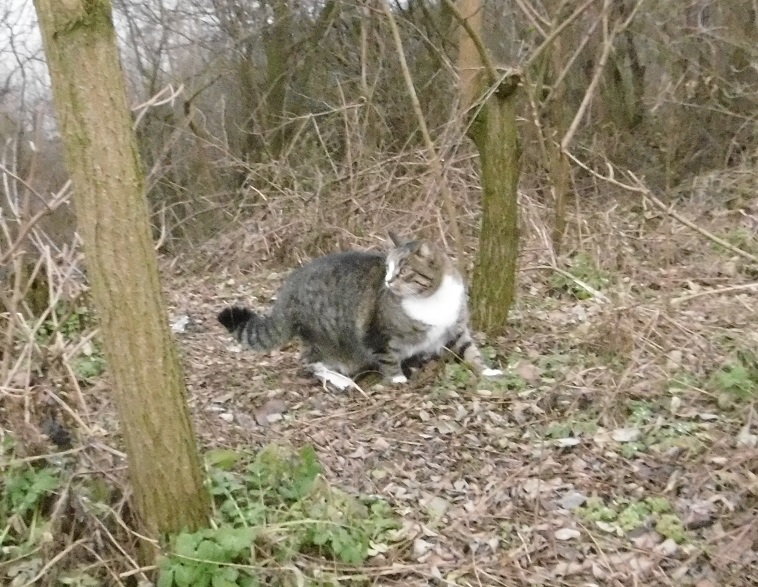 And in nearby Wloclawek, Leon wants some treats. Look how sad he seems!

Leon: Will I get any presents today as well?

There needs to be a trigger warning on nearly all of the tweets today. You may or may not be mentally scarred by what follows.
From reader Michael: a nefarious Christmas prank. Go to the thread to find out what Dad did.

Last year I decided to play the long game & didn’t tamper with the confectionary: spooked by the year before, he would not touch a single Ferrero Rocher (which was great because he usually inhales them at 750mph) so there were Ferreros aplenty for the rest of us. I bided my time.

While he was out I dipped the sprouts in chocolate, rolled them in chopped hazelnuts, and did all I could to replicate the iconic Ferrerro. pic.twitter.com/UgvLOXeXWJ

Did Dad bite? Read at the site and here.

A cockroach giving birth.
Enjoy your meal.
Do not thank me.

They sacrificed an entire train and a bridge for this shot, a precursor of Bridge Over the River Kwai:

This shot from Buster Keaton's The General cost $42,000 in 1926, roughly $600,000 adjusted for inflation. It is often described as the most expensive shot of the silent era pic.twitter.com/lciROj55oy

Cute moggie loose on the pitch! I always wonder if these cats are lost or feral. Regardless, I think that they should be rescued and placed in an Adoption Shelter for Footie Cats:

Tweets from Grania. I’m not sure how political journalist Steve Kornacki is killing Bernie, but I’d rather have Joe anyway.

An affectionate cat and its pole-dancing staff:

Grania calls this excerpt from a 1970s children’s book “the stuff of true horror.” You be the judge; be sure to read all the pages!

Sorry to ruin Christmas or whatever but I unfortunately have to share these excerpts from this 1970s children's sex ed book pic.twitter.com/lkzGRwPz8K

This is of course welcome news, and Grania says she’s taking it as “the final and unalterable word.” As for me, well, I’ve been drinking coffee and wine since forever: