Four days ago I reported on a Tablet article that investigated the Women’s March (WM) in detail, exposing the pervasive anti-Semitism of some of the leaders and their possible financial ties to the Nation of Islam (which accounts for three of the leaders cozying up to the racist, homophobic, and sexist bigot Louis Farakkhan). The upshot, as we’ve seen in several reports here, is that the Women’s March is fracturing, with local branches pulling away from the big organization (Women’s March, Inc.)—suing it for trying to have an exclusive trademark—local leaders denouncing the four present leaders (Bob Bland, Tamika Mallory, Carmen Perez, and Linda Sarsour), actors like Debra Messing and Alyssa Milano peeling off from the WM because of its anti-Semitism, and the revelation of possible financial shenanigans.

When the WM founders brought Mallory, Perez, and Sarsour aboard because the movement’s leadership lacked women of color, they didn’t count on (or realize) that these women came with both anti-Semitic and pro-sharia baggage. That baggage has now detonated, threatening to destroy the whole enterprise.  But those three women will never resign (though they should for the good of the movement) because they are enamored with the big power and visibility that the WM has given them. It’s a mess.

The Tablet article, though mainstream media largely ignored it—liberal venues like the New York Times won’t say anything critical about movements like the WM, though they readily do so for right-wing enterprises—has done substantial damage to the WM.

And of course the WM has to fight back. But the way they’ve done so, as reported in The Federalist (no, I am not a conservative!), is to get a PR firm to try to make a weird deal with journalists. Click on the screenshot below to read about the “deal” that the WM public relations firm is trying to make with journalists who originally highlighted the Tablet article on Twitter. 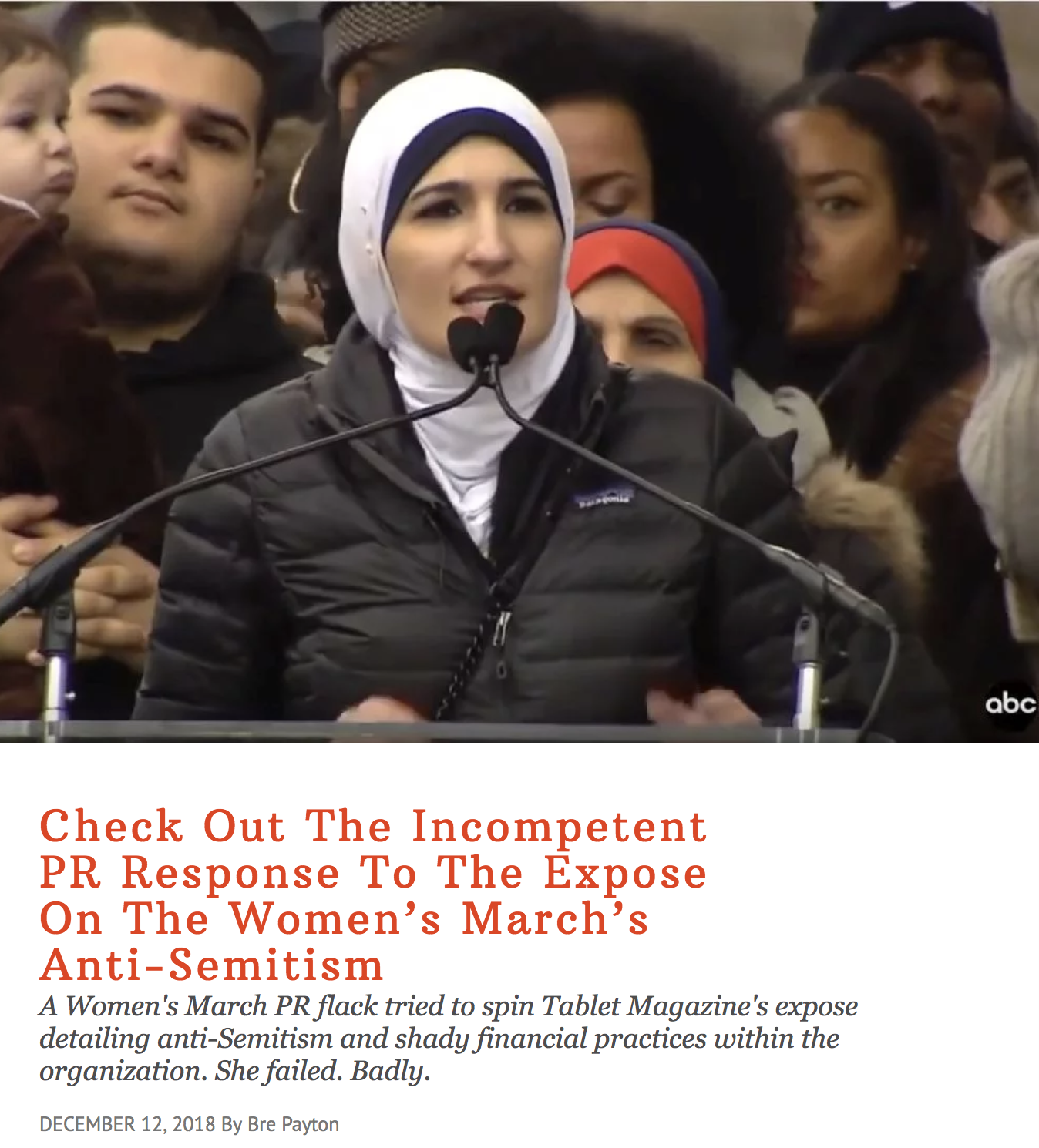 If you don’t like that site, there’s similar piece on the more liberal site Mediaite: 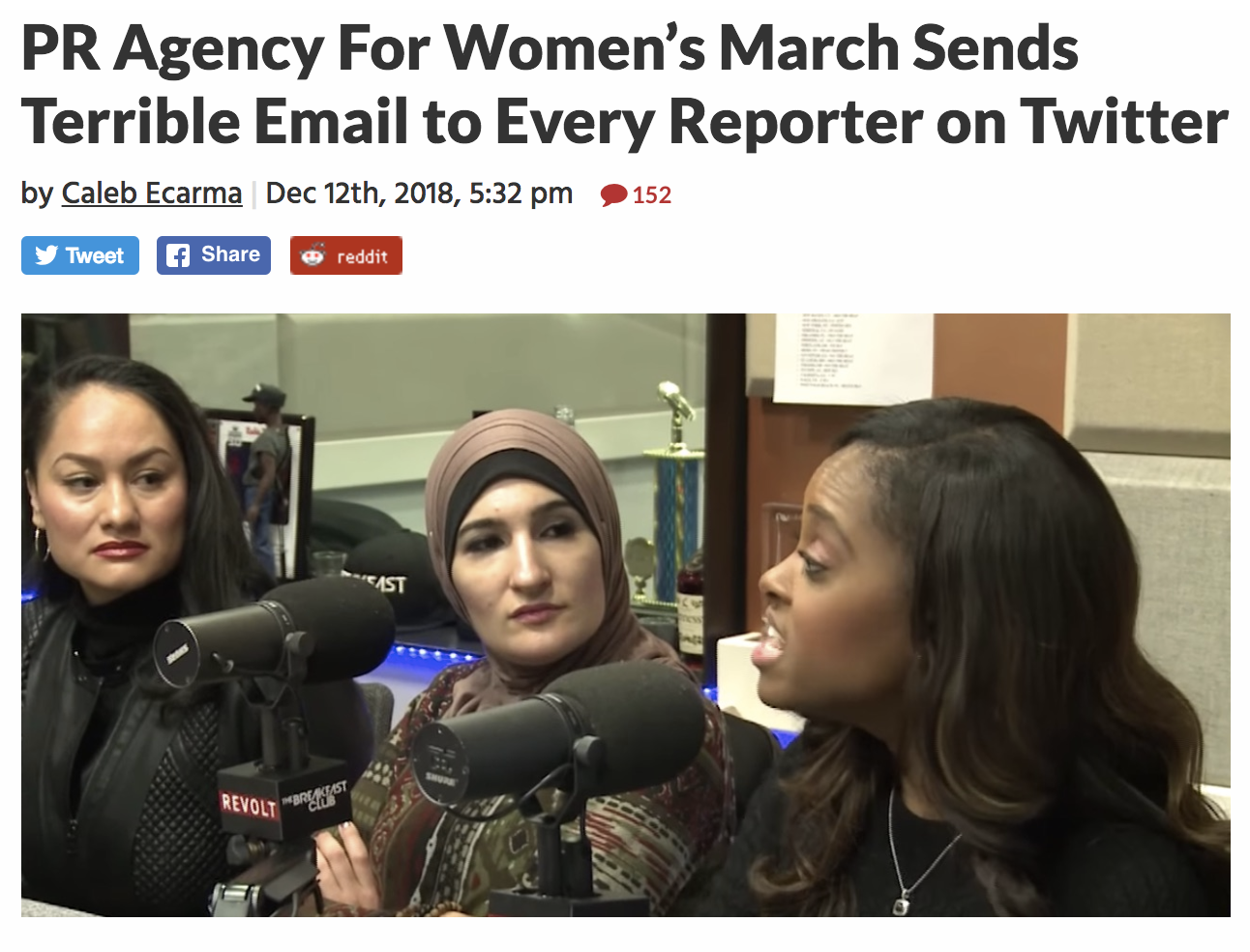 A PR firm representing the Women’s March sent out a bizarre, off the record email to reporters who tweeted about a recent exposé of the progressive group by Tablet Magazine.

A couple days after the Tablet piece came out, which detailed the alleged anti-Semitism of Women’s March co-chairs Carmen Perez and Tamika Mallory, Megaphone Strategies staffer Inarú Meléndez sent out a lengthy email to numerous reporters who shared the article, claiming that Tablet planned to correct the piece soon and she could prove it — but only if they deleted their tweets.

Here’s the email reproduced in The Federalist as sent to one journalist:

Asking these things of journalists—to hide the PR firm’s communication, to delete your tweets about a story, and to get permission from the “fact-checkers” to publish their corrections—is highly unusual, and out of line. The firm should simply have issued a press release with the “corrected” facts in it, and of course contacted Tablet. As The Federalist notes:

Asking a reporter from a different news outlet to agree to a list of demands before sharing a supposed fact check is bizarre. If Tablet Magazine actually got some facts wrong in its story, Megaphone should take that up with the magazine itself and ask that a correction be issued at the top of the original story. Asking that these fact checks be kept off-the-record also makes no sense. If there truly are factual errors in the story, wouldn’t Megaphone Strategies want this to be made known far and wide? Why the secrecy?

Also, a reporter’s tweets are none of Megaphone’s business. Demanding to know whether or not a reporter will delete a tweet before sharing information is an odd request. Why would a writer from a different outlet kow-tow to a random PR flack and agree to delete tweets in order to get these supposed “fact checks”–which must remain private for some reason–from the aggrieved party?

At least two journalists got sufficiently angry that they simply re-tweeted Tablet‘s original story. The second person below actually agreed to keep mum to see what corrections WM had, but never got the supposed list of false facts. Who knows if it will ever be made public? I suspect that it won’t, but stay tuned.

I'm sharing this story out of pure rage towards the PR company now attempting to get journalists to stop tweeting about this story. https://t.co/81n0lNyMZG

Megaphone Strategy’s acts constitute bullying—not a behavior alien to WM leaders like Linda Sarsour. The journalists aren’t putting up with it, nor should they. Let the PR firm contact Tablet (and issue a press release), and let Tablet and the media decide whether the Tablet‘s facts were wrong.

27 thoughts on “The Women’s March, Inc. tries to protect itself by unethically strong-arming journalists”