Alyssa Milano, the actor and activist (she was a prime mover of the #MeToo movement), has taken a principled stand that I have to admire even more, as it pits her against her fellow feminists who fall on the Control-Left. As reported by several venues, including The Independent and the left-wing Jewish site Haaretz, Milano has condemned two leaders of the Women’s March, Linda Sarsour and Tamika Mallory, and refused to speak at further Women’s Marches until those two leaders repudiate the anti-Semitism of their hero Louis Farrakhan. (Note that Carmen Perez, the third of four founders of the Women’s March, also admires the looney Farrakhan.)

As I’ve mentioned several times, Sarsour, Perez, and (especially) Mallory are unapologetic in their admiration of Farrakhan, head of the Nation of Islam (the Black Muslims) and one of the worst and most vocal anti-Semites in America (see here, here, here, and here). Farrakhan is also a homophobe.

Farrakhan on one hand vs. Jews and gays on the other: this poses a dilemma for intersectional feminists and control-Leftists. That’s because Farrakhan is black, but homophobia and anti-Semitism are not supposed to be part of the intersectionalist agenda.

Yet the resolution is always the same: Jews and gays go under the bus in favor of blacks and Muslims—presumably because they’re people of color. And when a black man demonizes Jews, well, Sarsour, Perez, and Mallory just keep extolling him.

Make no mistake about it: Farrakhan and the doctrine of the Nation of Islam exude hatred of Jews, and by proxy so do Perez, Sarsour, and Mallory, even though they sometimes make propitiating noises to the contrary, as Sarsour did after the Pittsburgh synagogue attack. But those noises ring hollow (note that Sarsour pointedly doesn’t mention Jews): 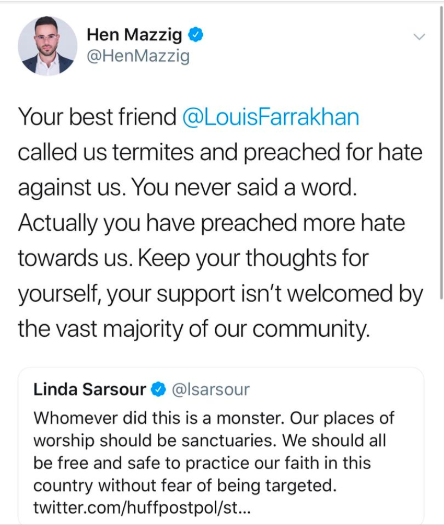 But let’s have some kudos for Milano, who, as Haaretz reports, said this:

In an interview with the Advocate published last week, Milano criticized Tamika Mallory and Linda Sarsour for not distancing themselves from the Nation of Islam leader, who has repeatedly made anti-Semitic, homophobic and transphobic comments.

“Any time that there is any bigotry or anti-Semitism in that respect, it needs to be called out and addressed. I’m disappointed in the leadership of the Women’s March that they haven’t done it adequately,” Milano said.

Earlier this year, Mallory was criticized for not speaking out after she attended an event during which Farrakhan said “The powerful Jews are my enemy.”

“I will not sit back while a strong, bold, unapologetic, committed Black woman who risks her life every day to speak truth to power and organize and mobilize movements is questioned, berated and abused,” Sarsour wrote on Facebook. “I stand with Tamika Mallory every day, with every fiber of my being because she has so much of what we need in the movement right now to win.” [JAC note: Mallory called Farrakhan the GOAT: “The greatest of all time”.]

In the Advocate interview, Milano said that she would not feel comfortable speaking at the March.

“I would say no at this point,” she said. “Unfortunate that none of them have come forward against him at this point. Or even given a really good reason why to support them.”

Indeed! And much as I applaud the goals of the Women’s March, women themselves should, like Milano, disassociate themselves from the March until the three founders Sarsour, Mallory, and Perez denounce Farrakhan’s anti-Semitism. Especially in these times of purity tests, women should not be led by those who cozy up to anti-Semitic loons like Farrakhan. (Sarsour, who promotes sharia law, isn’t exactly a shining light for women’s rights, either.)

Sadly, we have Islamophiles like Glenn Greenwald calling out Milano’s principled stand. Why? Because, although she’s a women, Milano is white.

White actress announces boycott of Women's March unless its gets rid of the Palestinian-American woman and African-American woman who founded it, or until they recite from the script she demands. https://t.co/X27aQV2puQ

{Note that Greenwald is mistaken here: Milano isn’t demanding that the Women’s March “get rid of” Sarsour or Mallory; she’s refusing to participate in their activities until the two women disassociate themselves from Farrakhan’s anti-Semitism.)
As Grania wrote in yesterday’s Hili post about Greenwald’s tweet:

My respect for Alyssa Milano goes up infinitely. My feelings about Greenwald were already less than complimentary, but now they sink even lower. Or as Greenwald would put it were the proverbial boot on the other foot: “Cisgendered white male mansplains to women what they ought to be thinking, tries to shame them publicly for having Different WrongThink.”

For me, people’s attitude toward Linda Sarsour is a touchstone of whether they’re truly progressive. If they admire her, they are admiring an anti-Semitic woman who favors the oppression of sharia law, all because she is supposedly an oppressed woman of color. Well, Sarsour is neither oppressed (she’s widely admired), nor is she a woman of color (she’s a light-skinned woman of Palestinian descent). Anyone who marches with or admires Sarsour is rubbing elbows with bigotry and hatred.