I really should stop looking at HuffPo, as it’s simply the Left’s version of Breitbart: a tendentious and often ridiculously slanted look at politics. Both sites anger me. If you know what subject a HuffPo article is about, you already know what it’s going to say. Or, at least, you know what line they’re going to take, as the article below surprised even me with its stupid thesis. Click on the screenshot if you must see the carnage: 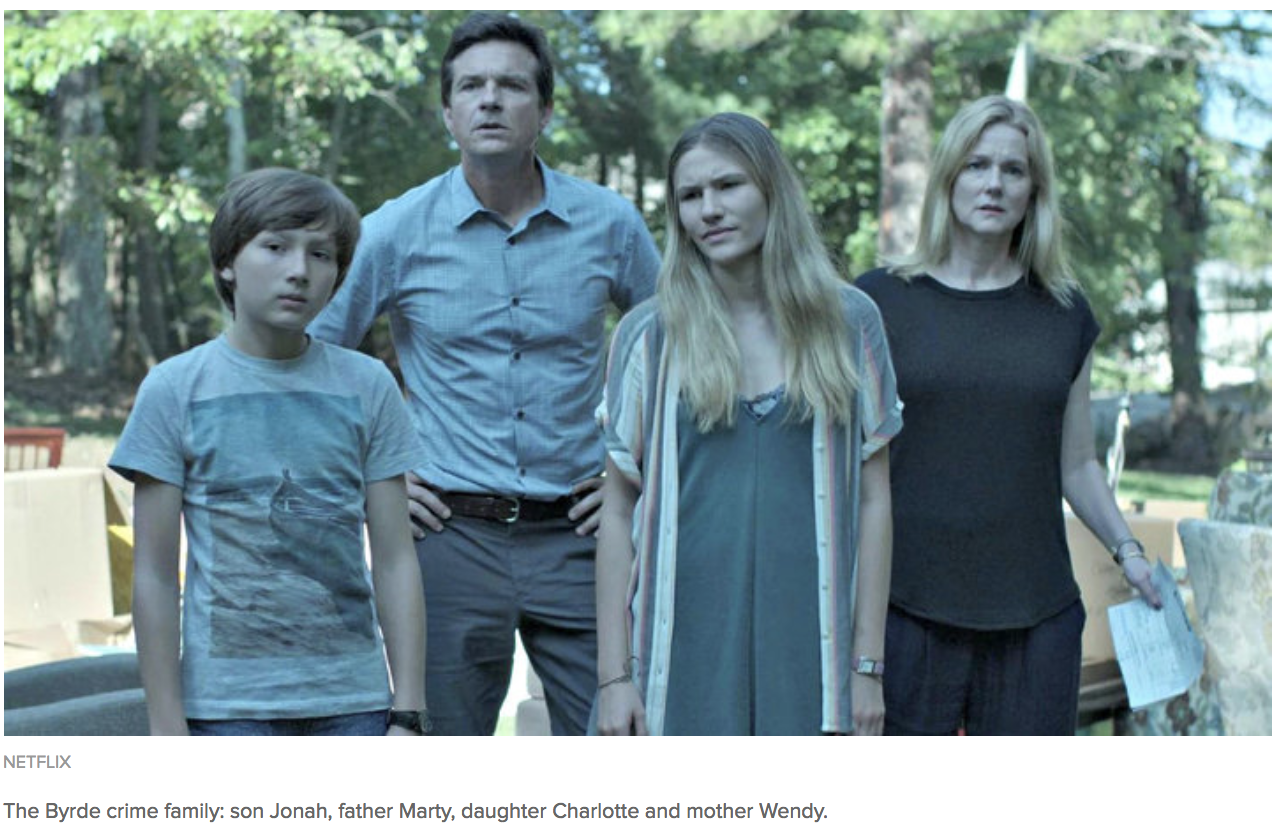 Her thesis is clear, and amounts to a lot of virtue signaling by the good professor, as she simply has no solution for the “problematic” issue she raises. Her claim is that our fascination with “white crime dramas” like “Ozark”, “Weeds,” or “Breaking Bad” reflects racism. How? Because, as racists, we don’t expect white families to be engaged in crime, so our attention to these kinds of television shows reflects the overturning of our expectations. Of course, black and Hispanic “crime dramas” are also racist, as they fulfill our expectations of the criminality of people of color. In other words, you can’t win, for every crime drama is racist, no matter who it portrays.

a.) White crime dramas are popular because they overturn racist expectations of how white people should behave. I quote:

In all of these shows, part of the drama and the comedy and the surprise depends on these families being white. Their whiteness is largely not discussed. But the juxtaposition between what audiences expect from these moms and dads and kids ― innocence and stability ― and what we see characters doing ― committing crimes and trying not to fall apart ― is intrinsic to the programs’ appeal.

White crime family dramas actually rest on the subversion of two expectations. The first is the widely held belief (at least among white people) about the inherent wholesomeness of white families, and the second is the false notion (again most popular among white people) that criminals are almost always individuals of some color other than white. [JAC: That last sentence is pure bullshit, I must say.]

Is there any truth in this? Well, I’ll admit that, for some, part of the suspense of a show could be the juxtaposition of a “normal” family with their life of crime. But that might not have anything to do with the families being white; it might have more to do with their middle-class status jarring with what they do on the side. It would also startle us if there was a “double” television show (à la Hannah Montana) in which Bill Cosby’s television family did the comedy show on one side but then dealt drugs on the other. (Bill Cosby isn’t white, of course.) Or perhaps 5% of our interest could come from the expectation that Daniels notes. But what is the evidence? There is none, just anecdote and assertion. I don’t watch much t.v., but I’m sure readers can produce counter-anecdotes.

After all, there’s a whole history of crime dramas that I find it impossible to characterize as subverting expectations that white people shouldn’t do crime. Take The Godfather trilogy, for example. Did anybody like it, or watch it, partly because they thought, “Jesus, the Corleone family is white! How odd that they’re in the Mafia.”?

I’m somewhat handicapped here because I don’t watch television except for the nightly news and “60 Minutes”, and don’t get cable. But I remember plenty of crime dramas in the old days, like Hill Street Blues, in which whites and nonwhites both committed crimes, and my absorption was with the story, not with the race of the criminal. And, of course, although racism was more pervasive before the Sixties, the crime dramas before then, like Dragnet, were popular not because they subverted expectations, but because of the story. There were almost no black people on television then, and I can’t imagine that Dragnet was popular because it overturned our expectations about whites. (One can also think of the popularity of the Bogart crime dramas, which had white offenders.)

I’m sure I have a lot of readers with cable who watch crime dramas, so please weigh in below.

b.) Some of the racism that motivates our watching these dramas is their concern with the family. I quote Dr. Daniels:

Together, Wendy and Marty are clear about what motivates their life of crime: It is always “for the family.” When Wendy tells Marty she bought a house so they can launder money through construction costs, she says she feels good about it because she “did it for our family.”

Then, she asks Marty, “What’d you do today ― for our family?”

“Bought a strip club,” he replies.

In “Ozark,” as in other white crime family dramas, the characters manage to justify every horrendous deed ― even murder ― because it was done “for the family.” These are anti-heroes, to be sure, but their moral and ethical dilemmas are meant to be sympathetic, because who among us wouldn’t do everything possible for our family? If the audience wants to think these felons-in-the-making are not as bad as the “real criminals,” the show gives them some room to do so.

Again, I doubt it is the case—though The Godfather involves “the family” a lot, but not in the way described above—that white crime dramas invariably involve families, and that’s to make them more sympathetic. Perhaps this is true to some degree, but Daniels doesn’t make the case that this involves racism and whiteness. She merely quotes anecdotes because, in the end, this is not about fixing racism (Daniels has no solution), but about the author showing how virtuous she is.

c.) Even showing white families engaged in crime somehow buttresses racism. This part of the article escapes me, but I think what Daniels is saying is that these dramas gives a false picture of crime because they portray the white criminals as more “wholesome” than blacks or Hispanics. That, at least, is what I glean from this bit.

The reality is that white families are no more or less wholesome than any other families. A majority of most violent crimes against white people are committed by other white people, and white people are far more likely to commit white collar crime.

Well, I’ll accept Daniel’s data here, but what she doesn’t point out—surely deliberately—is that blacks commit violent crimes far more often, compared to their proportion in the population, than do whites. This is well known, and I’m not for a minute imputing it to anything inherent in being black. In fact, I think it represents the residuum of racism, with blacks being put into living situations, including dire poverty, that can promote criminal behavior. But it can’t be denied that there’s a disproportionality. As one website notes,

It’s true that around 13 per cent of Americans are black, according to the latest estimates from the US Census Bureau.

And yes, according to the Bureau of Justice Statistics, black offenders committed 52 per cent of homicides recorded in the data between 1980 and 2008. Only 45 per cent of the offenders were white. Homicide is a broader category than “murder” but let’s not split hairs.

. . . What about violent crime more generally? FBI arrest rates are one way into this. Over the last three years of data – 2011 to 2013 – 38.5 per cent of people arrested for murder, manslaughter, rape, robbery, and aggravated assault were black.

Clearly, these figures are problematic. We’re talking about arrests not convictions, and high black arrest rates could be taken as evidence that the police are racist.

But academics have noted that the proportion of black suspects arrested by the police tends to match closely the proportion of offenders identified as black by victims in the National Crime Victimization Survey.

This doesn’t support the idea that the police are unfairly discriminating against the black population when they make arrests.

I don’t think that this means that black families are less wholesome than any other families. The crime could, for example, reflect the higher proportion of black families that have just one parent. I simply point out that the tendentious Daniels is being very selective in citing her statistics.

One could argue that we need racial and ethnic diversity in the representation of crime families. Writing more criminals who are black, Latinx or Asian would only reinforce existing stereotypes about race and crime, and we have plenty of shows doing that already.

The stories we tell ourselves matter, even when they come in the form of middling shows like “Ozark.” When stories about white crime families rest on ideas about the supposed goodness of white people, they reinforce a whole apparatus of assumptions, benefits of the doubt and second chances afforded to white people who cheat, steal, rape or kill someone.

In the end, Daniel’s misguided essay does nothing to eliminate the problem of racism. But, as I said, that’s not why she wrote it. She wrote it to signal her virtue by crying that racism is everywhere. Well, fine, but where is her solution?

Oh, and at the end of her essay, Daniels can’t resist taking a wholly gratuitous lick at Donald Trump and his family. This has nothing to do with her essay; it’s just another flag she runs up to show her virtue. I quote:

Those set of assumptions that animate “Ozark” are also the same ones that have enabled the white crime family that’s currently installed in the White House.

I don’t think so. And neither do a lot of commenters on the piece, who say stuff like this: 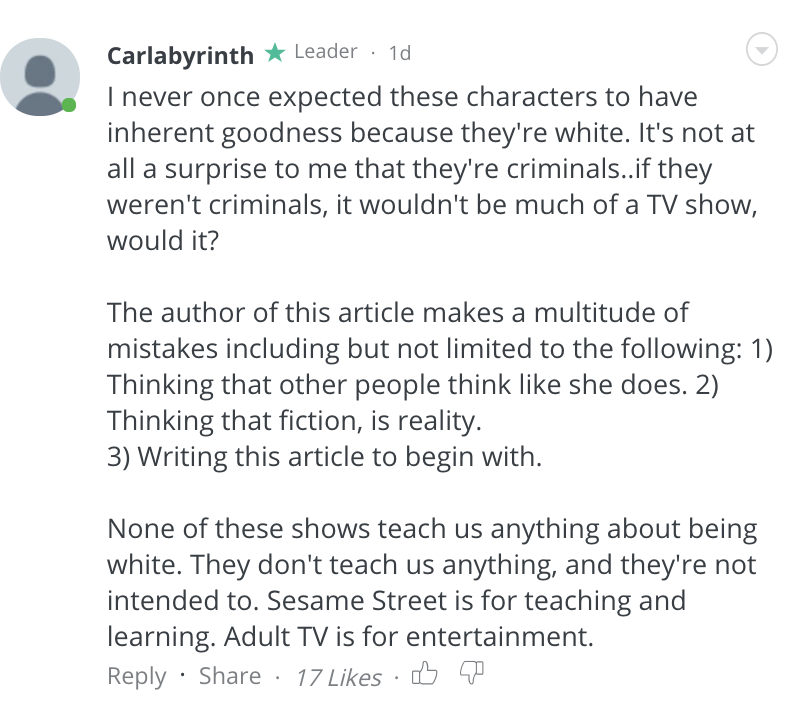 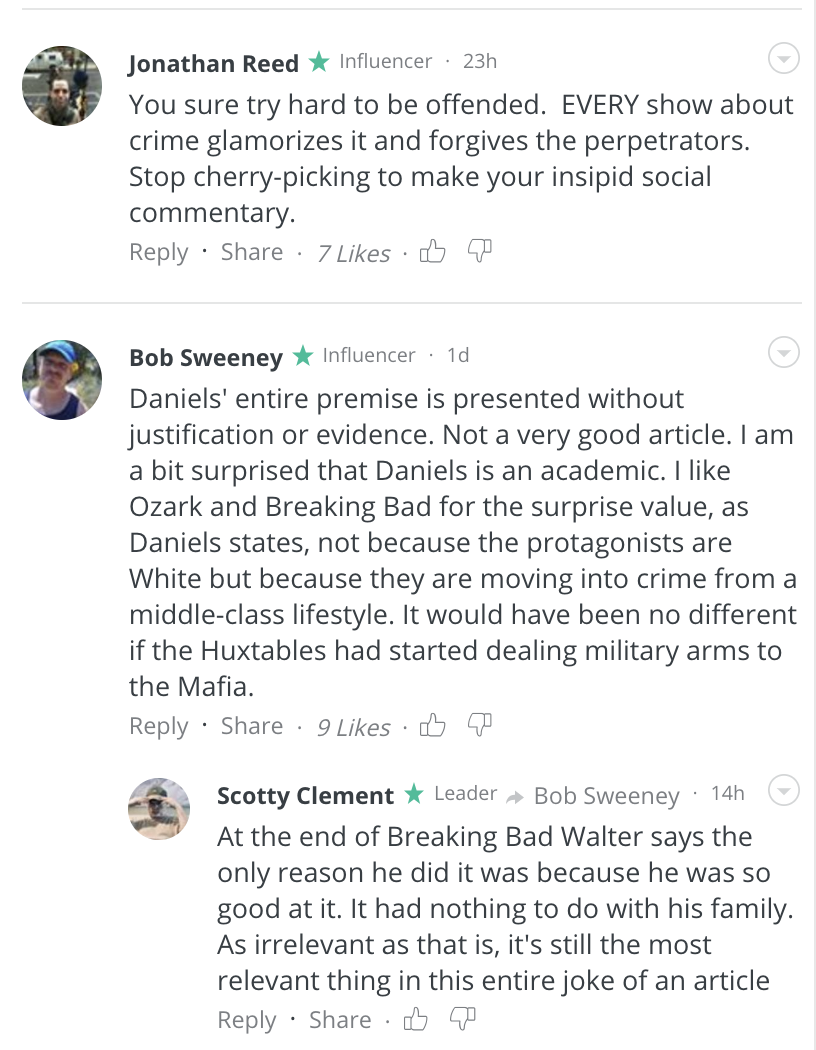 There’s hope for America yet.

111 thoughts on “American professor: “White crime dramas” are a sign of racism. So are black and Hispanic crime dramas”