There’s been a lot of publicity about David Quammen’s new book, The Tangled Tree: A Radical New History of Life, which tells the story of the discovery of a new domain of life, the Archaea, the discovery that chloroplasts and mitochondria are the remnants of anciently absorbed microbes, and, most novel, the recent discovery of horizontal gene transfer (HGT): the transfer of DNA and genes between relatively unrelated organisms. Most of the publicity about the book—to be sure, publicity pushed by Quammen himself—centers on HGT. It is, we’re told, something that radically overturns Darwin’s view of the “tree of life” and of evolution, and even revises our own view of “what it means to be human” (after all, we’re also told, a substantial part of our genome is dead, nonactive DNA from ancient retroviral infections).

A month ago today I reviewed the book in the Washington Post (see my postmortem post here), and was pretty critical of the way Quammen handled HGT. While the phenomenon is fairly common in bacteria, it’s less common in eukaryotes, and hasn’t dramatically altered our view of evolution in either case, much less having changed our view of ourselves. Even horizontally transferred genes must be subject to natural selection if they’re to spread as adaptations, and they certainly haven’t messed up evolutionary trees in eukaryotes, for people are still busy reconstructing the history of life using such trees. (Indeed, the delineation of Archaea as a separate domain of life depends on their being a discernible evolutionary tree.)

Nevertheless, Quammen still promulgates his spiel widely, most recently in a National Geographic interview and, more invidiously, in the RadioLab interview below (click on screenshot). After all, the man has books to sell. But I wish he’d tone down his rhetoric.

Both Quammen and the show’s hosts (Robert Krulwich and Jad Abumrad) seem to promulgate the misconceptions about HGT, and I hope RadioLab isn’t becoming more uncritical. I can’t enact the emotional labor to dissect every error in this 30-minute show, but here are a few bizarre things to which I took exception:

1.) Krulwich says that Quammen’s book shows that HGT and perhaps endosymbiosis (origin of mitochondria and chloroplasts) are “a smack in the face to Darwin’s theory of evolution.” Well, not really. They are revisions of how genetic variation comes to enter a species’ genome, but, as I said in my review, HGT doesn’t really efface Darwin’s “tree of life.” And it hasn’t affected our view of adaptation via the disposition of random genetic variation by natural selection.

2.) In the classic story of the peppered moth Biston betularia, the show tends to cast the spread of the “melanistic” mutation in the moth during industrialization as a refutation of “incremental mutation”. But it’s wrong to say that the old idea was that the color difference was due to several mutations, or happened gradually,. We have long known that the change in color from peppered white to dark was the result of mutation in a single gene, and that the English population became transformed quickly: within a few decades. Further, when pollution controls were passed, the moth quickly reverted to its ancestral peppered form.

The change was not, as Krulwich says, instantaneous. And just because the gene change was due to a “transposable element”” that moved within the moth genome (i.e., not HGT) rather than a change in one nucleotide does not affect the Darwinian nature of the change one bit. It just shows that the “mutation” was a big one involving translocation of a big chunk of DNA into the moth’s cortex gene. No revision of Darwinism needed, especially because Darwin didn’t even know about genetics, so you could equally well shout that genetics itself was a “smack in the face to Darwin’ s theory of evolution”. The whole characterization of the “original” Biston story as “incremental mutation and very slow evolutionary change” is a straw man”—not even wrong.

I wrote to my old undergraduate advisor, Bruce Grant, who worked extensively on Biston. He listened to the RadioLab show and had this to say:

The “review” of the classic peppered moth story is garbled and grossly misrepresents it. No one has ever argued for incremental mutations. There are multiple alleles that produce a range of intermediates collectively called insularia, with the darkest, fully melanic phenotype called carbonaria. It acts as a qualitative autosomal dominant, fully melanic from the get-go wherever it occurs (besides the UK, in North America and Japan). Its frequency increased via directional selection, and its frequency has also decreased by directional selection. Further, these changes have been parallel in both directions on separate continents (US and UK), in concert with documented changes in air quality assessed by suspended particulates ( soot).

The DECLINE in melanism has been much better documented than its increase. There are mountains of data. Those taken by Cyril Clarke include nearly 20,000 specimens collected at one location near Liverpool from 1959 to 2001+. Insularia (intermediates) have always been rare there. Effectively only two phenotypes have been involved: fully melanic carbonaria and the “typical” peppered form. The reduction in the frequency has been gradual, did NOT involve intermediates and fell from well over 90 % to under 5 % in 40 generations. Now carbonaria has all but disappeared there. I witnessed this decline personally from 60 % onwards. It’s real and intermediates (insularia) were always rare there.
Parallel changes have occurred independently in Michigan. All this has been published and is supported by hard data. The RadioLab people do NOT know what they’re talking about.

What Quammen is probably confused by is Ilik Saccheri’s evidence that transposons may be responsible for the original mutation. But there are still some reservations about that I spelled out during my talk at CoyneFest. I do think that Ilik oversells his work, and shortchanges others in the process, but surely he’d still object to Quammen and the hosts’ interpretation of Industrial Melanism.

3.) The suggested idea that the first billion years of life involved pervasive HGT, and that individuals and species weren’t easily delineated, is just that—speculation. Species and well delineated individuals could have arisen quite early, for all we know.

4.) Krulwich’s claim that HGT shows that evolution “can happen a lot faster than we thought” isn’t really true. A horizontally transferred gene is just a big mutation, and in many cases will sweep through the population just as rapidly or as slowly as a mutational change in the organism’s own DNA. What’s important is how strong natural selection is. And we already knew that evolution by conventional mutational changes in genes can happen quite quickly, even without HGT. (Biston is an example of that, as is the 10% change in beak size in one year in the medium ground finch revealed by the work of Peter and Rosemary Grant and their group.)

5.) Once again we hear the claim that the human microbiome and the presence of viral DNA in our genome means that we have to revise the notion of who we are, and “what it means to be human”. But that’s bogus, too—just a sensationalistic way to sell books. The fact is that I don’t wake up every morning and think, “Geez, my gut is full of E. coli and my DNA full of retroviruses. I have to rethink what it means to be Jerry Coyne!”

6.) There is a clear implication that Carl Woese contributed to work on HGT. This is not the case: his work highlighted in Quammen’s book was in discovering the domain of life comprising the species within the new group Archaea.

7.) Finally, it is overblown to think that HGT and endosymbiosis means that the categories of ‘individual organism’ and ‘species’ become blurry. Is Homo sapiens a real group or an arbitrary construct? The former, for sure. And I am Jerry Coyne, not a mixture of Jerry Coyne and Donald Trump (thank god!).

So listener beware when you hear this discussion on NPR. I wish Krulwich & Co. would have been a bit more critical rather than credulous consumers of Quammen’s sensationalism. 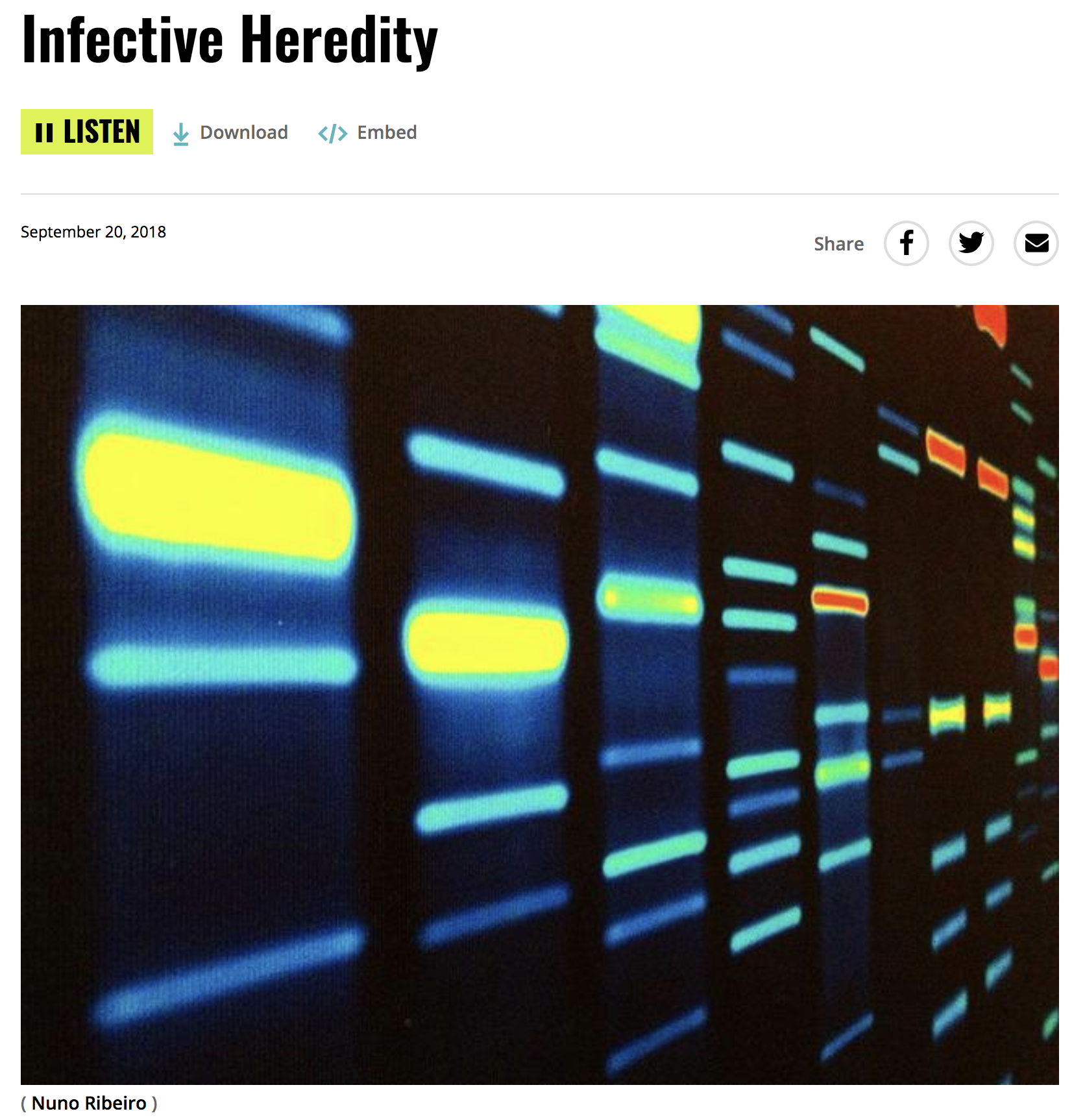 22 thoughts on “RadioLab distorts some science”