The Ediacaran fauna, a group of extinct species that lived between 571 and 541 million years ago, has been an evolutionary anomaly. Its fossil record contains multicellular organisms, but they are just plain weird, bearing little resemblance to present-day metazoan (multicellular) animals.

The two species of “dickinsoniids” shown below, for example, lack a mouth or gut (possibly having external digestion instead), are bilaterally asymmetrical, and bear a pattern of body “quilting” that isn’t seen in present-day animals or definite early metazoans like worms: 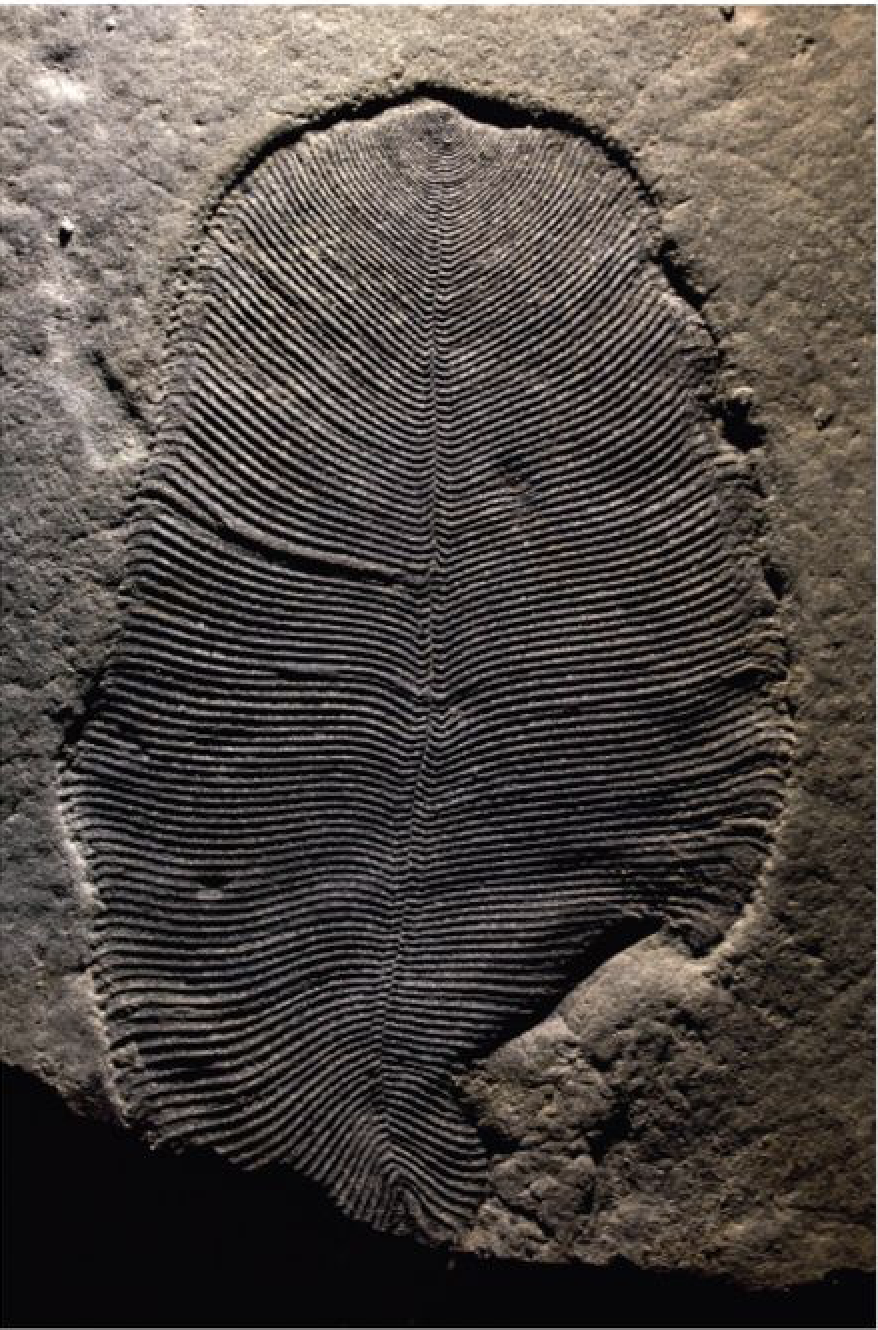 Here’s a dickinsoniid in the genus Andiva, also studied in the present paper: 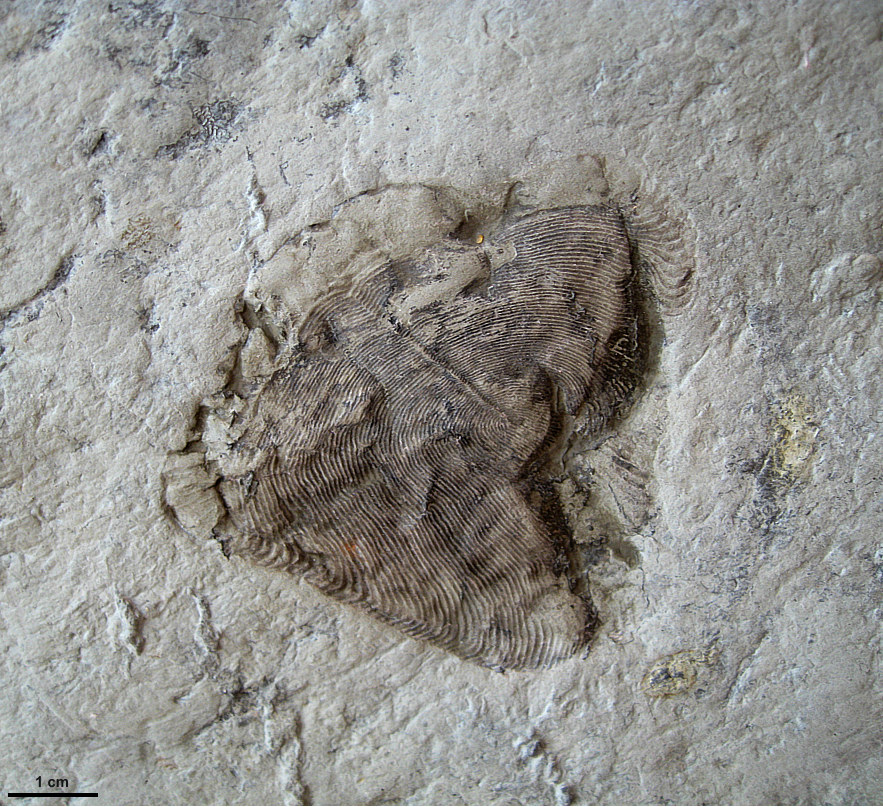 What are these things? Controversy has centered on whether they were a whole kingdom of life different from any that we know today (a group that went wholly extinct), or, in contrast, perhaps the ancestors of modern day animals—or at least the relatives of modern day animals. Scientists have guessed that they might be either lichens or giant protozoans. (Yes, protozoans can get this large; some are nearly ten inches long!) This is important to resolve because the “Cambrian explosion” that gave rise to many modern groups of animals began about 541 million years ago, and we want to know if there were animal precursors before that, and what they were. We also want to know whether the Ediacaran fauna really does represent an entire group of creatures that disappeared without issue.

A new paper in Science by Ilya Bobrovskiy et al. (reference at bottom with free Unpaywall link, free pdf here) establishes fairly securely that Dickinsonia and related anomalous species do indeed seem to be metazoan animals rather than members of a separate large group that went extinct entirely. The telling data involves biochemical analysis of the thin films of organic matter that cover the fossils and was presumably produced by the fossils. These fossils were 558 million years old, which, if they were animals, would make them the oldest known metazoans.

To make a long story short, Bobrovskiy and colleagues collected specimens of dickinsoniids from sandstones of the White Sea region of Russia and removed the small (three micron thick) organic mat covering the fossils. Great care was taken to avoid contamination, and they also analyzed the sandstone around, above, and below the fossil to see if the peculiar organic profile they found was associated with the fossil itself. It was, and it also suggested that the fossils were animals, not lichens or giant protozoans.

The telling chemicals were 27 carbon steroids—cholesteroids—which were present as 93% of chemicals in the mat atop the fossils, but only 11-12% of the surrounding sandstone (probably coming from algae or other plants). The fossils, moreover, were almost entirely missing a class of chemicals, ergosteroids, that characterize lichens. And the chemical signature of these fossils didn’t much resemble that of the modern giant protists, either.

There was, however, one twist to the findings: the “isomers” (chemically identical molecules of different handedness or arrangement) of the cholesteroids in these fossils were mostly of a single handedness (the “5β” form), while that of more recent and genuine animal fossils have a more even mixture of right- and left-handedness. This is puzzling, and the authors have no real explanation. This may suggest that even if these fossils were related to modern animals, they were distantly related, having a unique metabolism. They may, then, have branched off from modern animals, with the dickinsoniids and other Ediacaran fauna having gone extinct without descendants. Further, analysis of Andiva doesn’t show the same elevation of cholesteroids, though it does show a preponderance of 5β forms.

So this isn’t as compelling a demonstration as I had wished, but it still shows that these things were probably metazoans and not creatures related to modern lichens or protozoans. The authors conclude this:

Molecular fossils firmly place dickinsoniids within the animal kingdom, establishing Dickinsonia as the oldest confirmed macroscopic animals in the fossil record (558 million years ago) next to marginally younger Kimberella from Zimnie Gory (555 million years ago). However alien they looked, the presence of large dickinsoniid animals, reaching 1.4 m in size, reveals that the appearance of the Ediacara biota in the fossil record is not an independent experiment in large body size but indeed a prelude to the Cambrian explosion of animal life.

“Prelude” is a bit ambiguous, but I’ll grant that these are animals. I asked my friend Latha Menon, who has a Ph.D. from Oxford in early life studies, whether this paper was important, and I give her answer (with permission):

I do think it is an important paper. I’ve recently seen a lovely Dickinsonia specimen in a collection. You can really see how it’s like a very thin flatworm like form (or like a giant Trichoplax?) draped over the uneven ground below. Much has been written about its morphology but to find a specimen with associated organic matter and demonstrate that it is an animal from the biomarkers is very solid evidence. We have indications of simple animals earlier, from the traces found by Alex Liu and myself, and the remarkable squished Haootia specimen Martin Brasier discovered, which seems to show muscle bands. This specimen is younger and part of a more complex assemblage, but it is good to have solid evidence of animals well before the Cambrian boundary and some 40 Ma before the Cambrian explosion. Animals did not burst on the scene then; there was, as most of us have suspected, a long fuse.

Of course this does not mean that all the large forms of the Ediacaran were animals; there were probably several kinds of forms. But it does show that one ‘quilted’ form was animal and that suggests a number of other enigmatic forms in the biota were too. 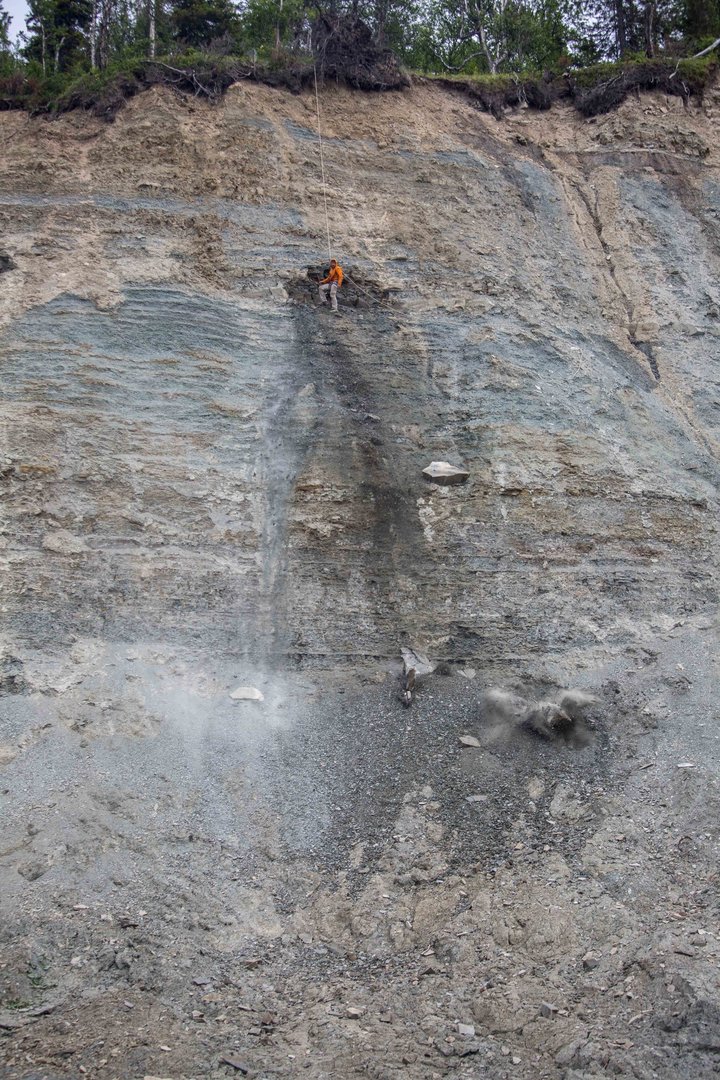 40 thoughts on “The earliest known animal?”