I’ve now read Richard O. Prum’s new book, The Evolution of Beauty: How Darwin’s Forgotten Theory of Mate Choice Shapes the Animal World—and Us (I’d highlighted the work earlier in my critique of his NY Times article about the book). Click on the screenshot to go to the book’s Amazon site. (Prum is a professor of ornithology, ecology, and evolution at Yale.) 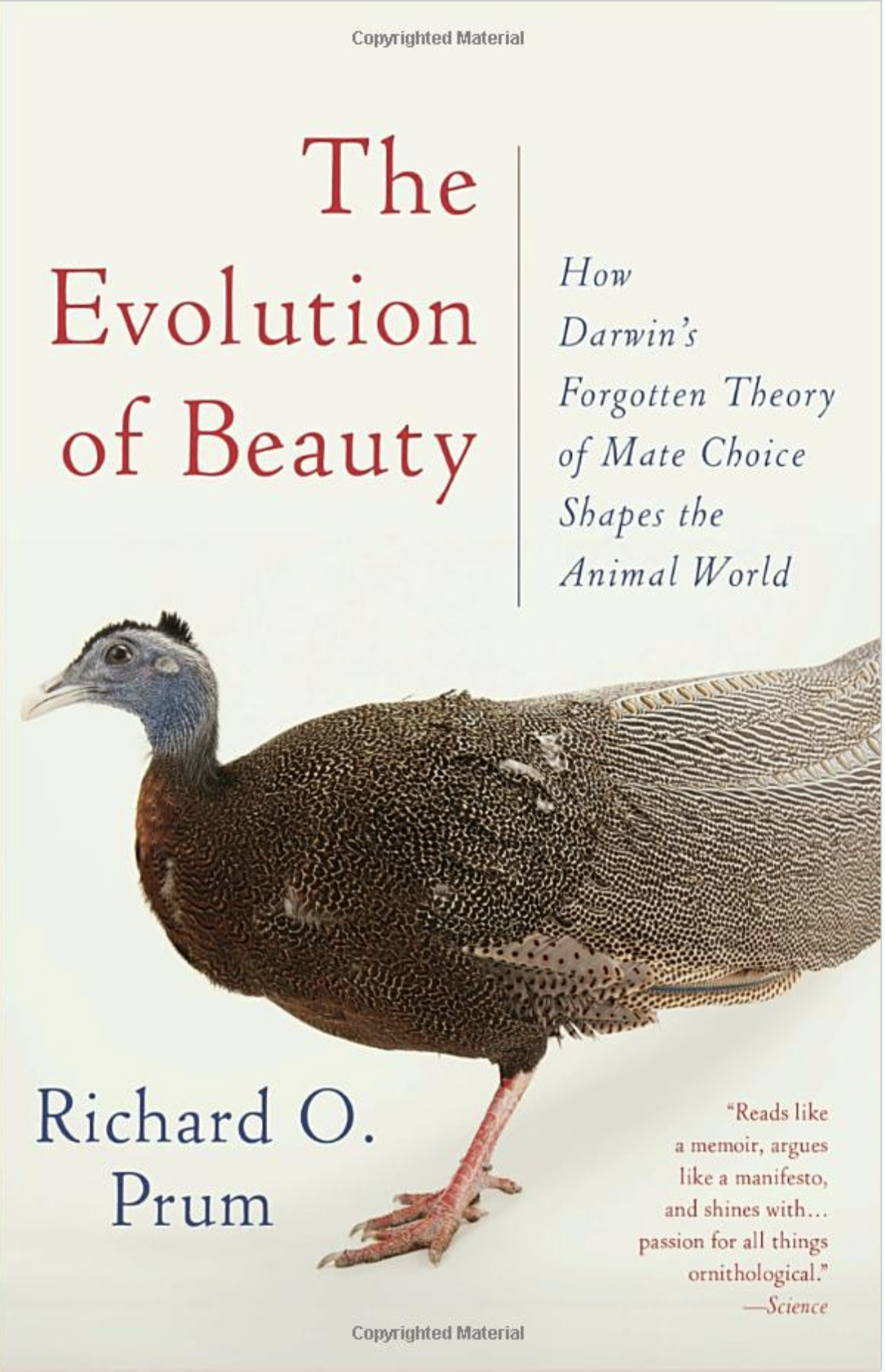 The review I want to highlight was published in the journal Animal Behaviour, but I’ll get to that in a minute. First, I want to give my own brief take on the book.

The Evolution of Beauty is in fact a mixed bag, but for me the problems outweigh the good parts. First, though, what’s good, and a bit of background.

Prum’s purpose is to explicate a theory of sexual selection that was suggested by geneticist Ronald Fisher eighty years ago and was elaborated much more recently by my colleagues Russell Lande and Mark Kirkpatrick. (Prum also draws a line of descent to this theory from Darwin’s own views of sexual selection published in 1871.)

This theory—the “runaway model”, called by Prum the “Beauty Happens” model—tries to explain why males are ornamented and show displays, while females choose among those males. This is sexual selection, which Prum (mistakenly, in my view) says is qualitatively different from natural selection (see my earlier post for my take on this pseudo-distinction). Prum’s view is that the runaway process, in which females evince randomly generated “aesthetic” preferences for male traits, have been the “ubiquitous” cause of sexual ornamentation and displays in animals. (His examples are drawn largely from birds, but he applies them to humans in the book’s final chapters.) The male traits and female preferences get exaggerated because they are genetically correlated: those females with preferences mate with males having the preferred trait, and the offspring carry genes for both the preference and the male trait. This causes a snowballing process that exaggerates both trait and preference to the extremes that we often see in nature.

Prum contrasts the runaway process with other forms of sexual selection in which females choose males not because they’re “beautiful” (to Prum that word that simply means “what appeals to females”), but because the offspring of females get benefits from her choice: either genetic benefits (“good genes” models) or “direct benefits” (healthy males can better take care of offspring or don’t pass parasites onto the mother and hence onto her young). These models, in which male traits and behaviors indicate the health or genetic quality of a male, are known as “indicator models”.

There are also other models that are either well known and substantiated (“male-male competition”, which causes sexual dimorphism and ornamentation, including antlers in deer, larger body size in competing male elephant seals, and so on), or more speculative but still credible models (“sensory exploitation,” in which female preferences are a byproduct of behaviors that existed for other reason, like preferring colors that resemble berries). There is in fact evidence for nearly every model of sexual selection, but it’s so hard to do this kind of work that we simply cannot say, as does Prum, that one scenario is “ubiquitous.” It’s early days here, and Prum’s suggestion that we know the answer is premature, though in the end he may be right. Or other models may be right. Or the answer may be that different models contribute to sexual dimorphism in varying degrees, or act together. We just don’t know.

The good aspects of Prum’s book include a historical overview of the difference between Darwin and A. R. Wallace in their views of sexual selection, and a critique of the many modern behavioral ecologists who uncritically adopt “good genes” models as the default explanation for sexual dimorphism. Further, Prum’s descriptions of male traits and behaviors, most seen by him in the field, are superbly written and often mesmerizing.

The book’s problem is that it is tendentious. Prum doesn’t describe the issues with his favored runaway model; he mistakenly regards it as a “null model” against which other models must be tested since, he wrongly claims, it makes no assumptions (he also claims that his null model can neither be proven nor disproven, which makes it non-scientific); he neglects other forms of sexual selection; he does not recognize that various models can work together and likely do work together; he ties “good genes” models to eugenics and even Nazi eugenics, unfairly tarring sexual selection theory with the residue of an unsavory past; and he claims that female choice of mates, which he calls “sexual autonomy”, somehow vindicates feminism in our own species.

The tie to feminism is a particularly invidious way to sell his theory, as female choice in birds is a direct product of evolution, while human feminism is a rational conclusion our species draws to improve society by treating people equally. Feminism should not be buttressed by biology, as that makes it susceptible to further knowledge from biology. If you study other species, for example, you could draw other conclusions and support other forms of sexual behavior in humans. Many species, for instance, have “traumatic insemination,” in which the male simply bypasses female choice by either forced copulation or, in the case of bedbugs and some invertebrates, injects the sperm directly into the body cavity, bypassing her genitalia and often injuring or killing her. Here are two bedbugs going at it, with the smaller male sticking his genitals directly into the female body cavity; you can see the puncture wound he’s making. (The sperm somehow still find their way to the eggs.) 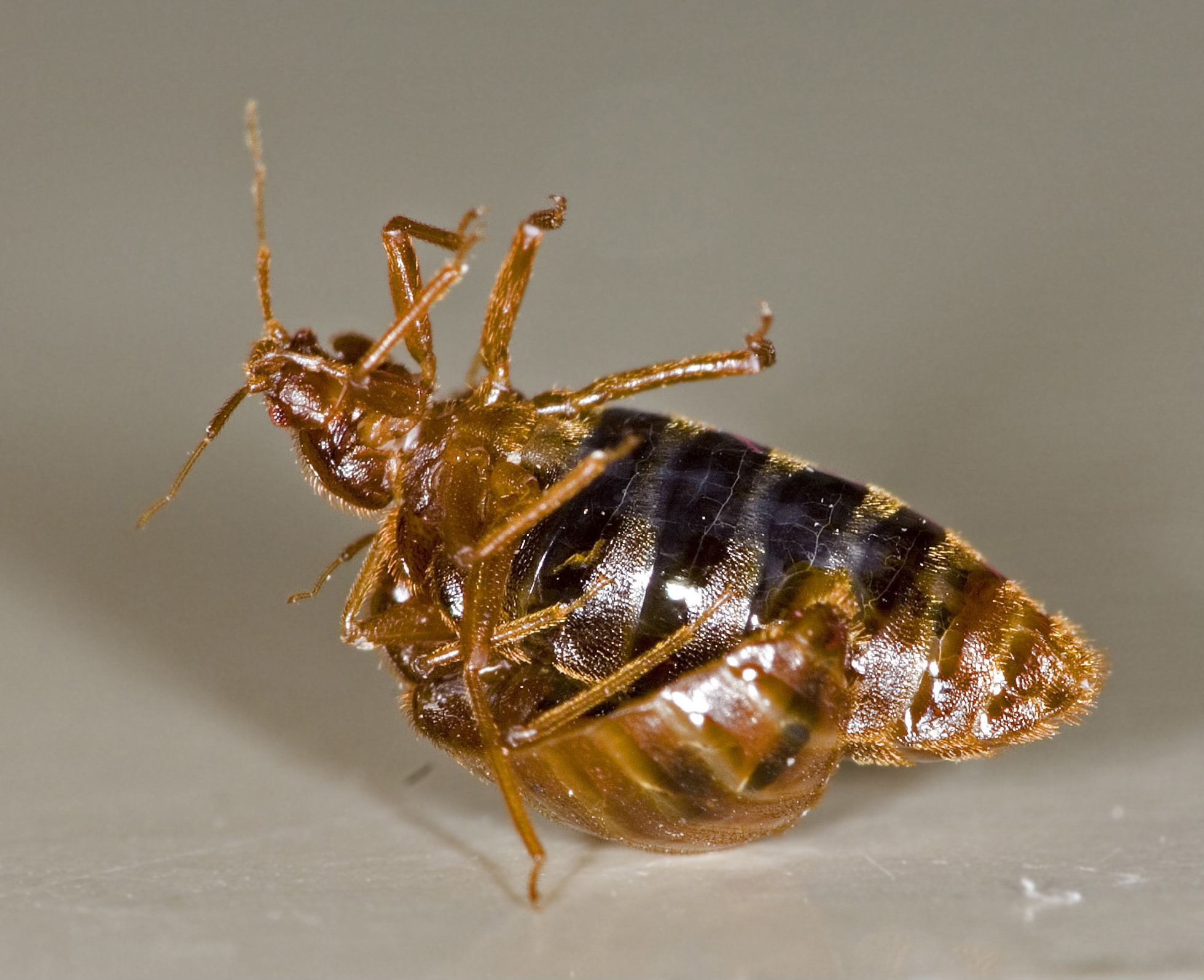 If you studied deer or elephant seals, you might find support for the existence of harems in humans, in which powerful males, by virtue of their status, are able to dominate and mate with many women, while the “losers” go childless. This underscores the big mistake of using your favorite brand of biology to support ideological or moral conclusions. (I note that biology can, however, inform some aspects of morality: learning about fetal pain may, for instance, affect one’s views about abortion.)

Nevertheless, the problems with Prum’s book are so serious that it distresses me that it’s gotten such good and uncritical reviews. The New York Times, which gave it a glowing and uncritical review, selected it as one of the Ten Best Books of 2017.  It was also one of three finalists for the 2018 Pulitzer Prize in General Nonfiction (it didn’t win), which convinces me that those who choose these candidates don’t know much about the books’ subjects. I’m starting to realize that magazines and websites should choose scientists, or at least people who deeply understand the science at issue, to review trade books about science.

But enough; I will likely give a fuller explication of my views in the future. For now I want to highlight a newly published critique of Prum’s book by Gerald Borgia and Gregory Ball, two researchers from the University of Maryland who work on mate choice in bowerbirds. (Borgia is my former colleague.) Their review of The Evolution of Beauty occupies a page and a half in the latest issue of Animal Behaviour. The reference with link (also here) is below, and the pdf is here; both are free to me with Unpaywall, but if you can’t download them, a judicious inquiry might yield you a pdf.

Borgia and Ball’s criticisms are similar to mine, but as they are experts, they go far beyond what I’ve written above. If you know about sexual selection it may be an easier read, but if you’re interested in sexual selection I suggest you give it a try. At any rate, at the end of their review, Borgia and Ball raise the feminism and eugenics angles, and the excerpt below should be comprehensible to everyone. I’ve put in bold a particularly misguided quote from Prum:

In the last chapter of Beauty, Prum reveals the political view that has shaped the core arguments in this book. Prum’s style and message is a rerun of Gould and Lewontin’s divisive writings from 40 years ago, in which they unfairly associated adaptationism with genetic determinism, eugenics and Nazi atrocities (Allen et al.,1975, p. 186). Prum applies similar arguments to sexual selection, associating good genes and adaptive mate choice hypotheses with eugenics and Nazi violence. He states: ‘To permanently disconnect evolutionary biology from our eugenic roots, we need to embrace Darwin’s aesthetic view of life and fully incorporate the possibility of nonadaptive, arbitrary aesthetic evolution by sexual selection. “…Accordingly, evolutionary biology should adopt the nonadaptive, Beauty Happens null model of the evolution of mating preferences and display traits by sexual selection”(page 331).

That’s incredibly dumb. What it says is that we should adopt one scientific theory over others (surprise!—it’s Prum’s favored theory) not for scientific and evidential reasons, but simply because that theory can’t be tied to discredited views of eugenics. Borgia and Ball continue:

Prum’s conflation of eugenics and genocide with adaptive mate choice is a disservice to his readers and colleagues for several reasons. First, this argument is wrong. Mate choice represents individual, and especially female, reproductive freedom, whereas eugenics and genocide represent a restriction by the state on an individual’s ability to live and reproduce. It is not more moral to choose a mate  for arbitrary reasons, as Prum suggests, than to choose one to enhance the success of one’s offspring. Consistently across societies, parents support the interests of their offspring, suggesting that adaptive mate choice may be viewed as morally superior. Second, Prum’s mistaken association of eugenics with adaptive/good genes mate choice represents a threat that can limit free scientific discussion of important issues, and this should be resisted. Third, science validates or rejects hypotheses based on evidence, not on potential or contrived historical associations, altruistic intent, or political belief.

We offer two key takeaways from this book. First, contrary to Prum’s claims, LK [“Lande-Kirkpatrick”] runaway selection has enjoyed a privileged position, including being prominently presented in evolution and behaviour textbooks despite a lack of supporting evidence. Perhaps the most significant implication of Beauty comes from Prum’s inability to make a credible case for LK runaway sexual selection in this book’s 448 pages, suggesting that it may be time to shift focus to other, better-supported models. Second, Prum’s (and other, earlier) efforts to inject politics into science commonly distort the science to justify political goals. We should have all learned by now that science is about understanding what nature is, not what we want it to be. The arguments in Beauty that suggest otherwise should be rejected.

That’s a fine ending of a good review—and by that I mean a thoughtful review.

Here’s a 7-minute Big Think video in which Prum explains his views. His drawing a connection between eugenics and adaptive theories of mate choice begins about 2:10. He continues, tying the theories he opposes to eugenics and racism (and to his view that sexual selection differs from natural selection), at about 4:50.