Well, my headline may be a tad exaggerated, but I’m pretty sure that the subject of this post is not friendly to Jews (she’s made some remarkably ill informed comments about Palestine). Read on.

Many Democrats have been excited about Alexandria Ocasio-Cortez, for the young Hispanic activist (she’s 28) won the Democratic primary for a House seat in New York, gaining a big upset victory over the incumbent. She’s a Democratic Socialist, but my take on her is that she’s not particularly bright and is espousing views that, while they may win her a seat in the House, won’t advance the Democratic platform. In fact, her election may give Democrats an even worse image.

I say that because Ocasio-Cortez has cozied up to some odious characters. Here she is headlining the Universal Muslim Association of America meeting with our favorite sharia-lover and FOF (Friend of Farrakhan), Linda Sarsour (click on screenshot): 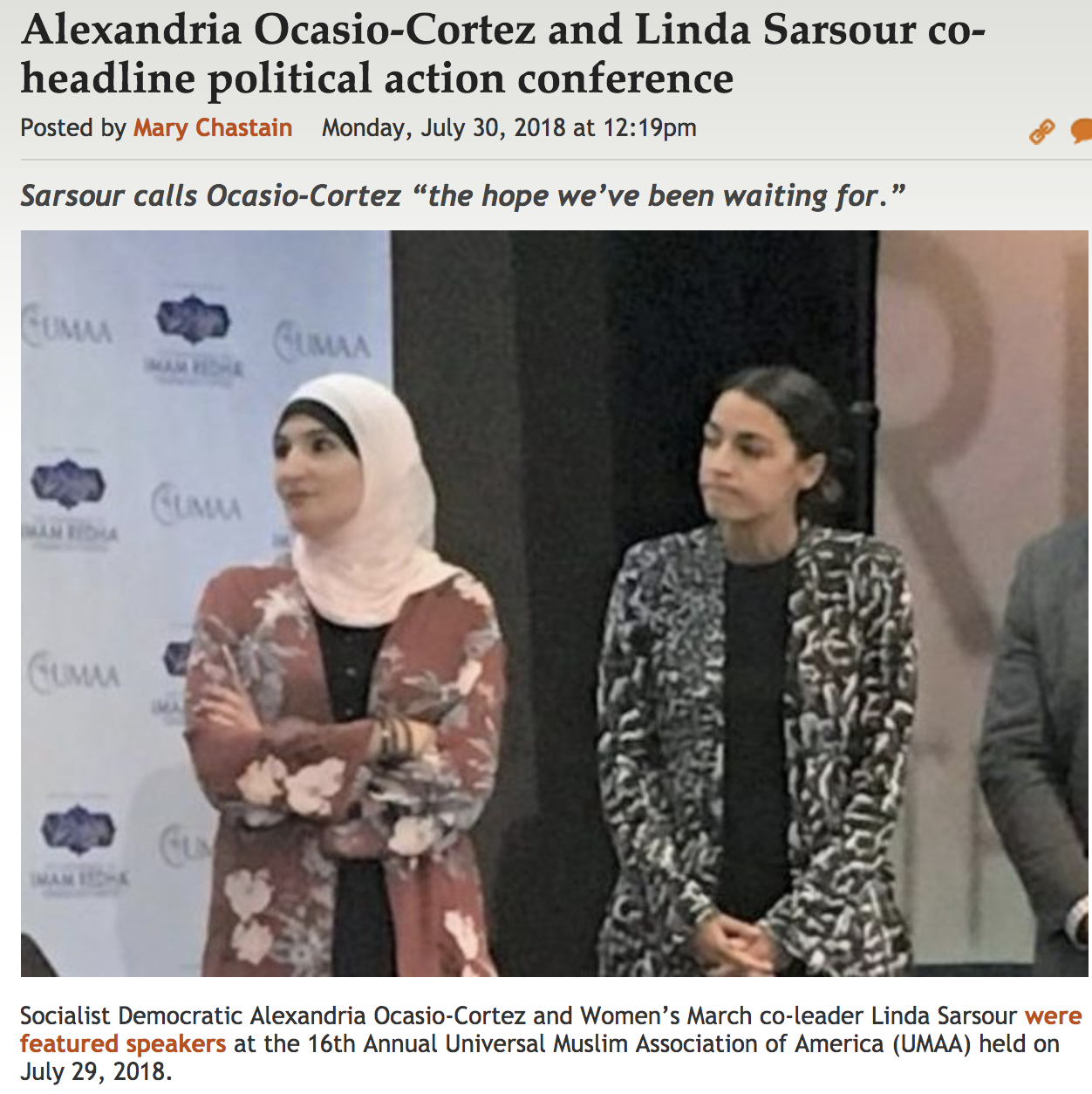 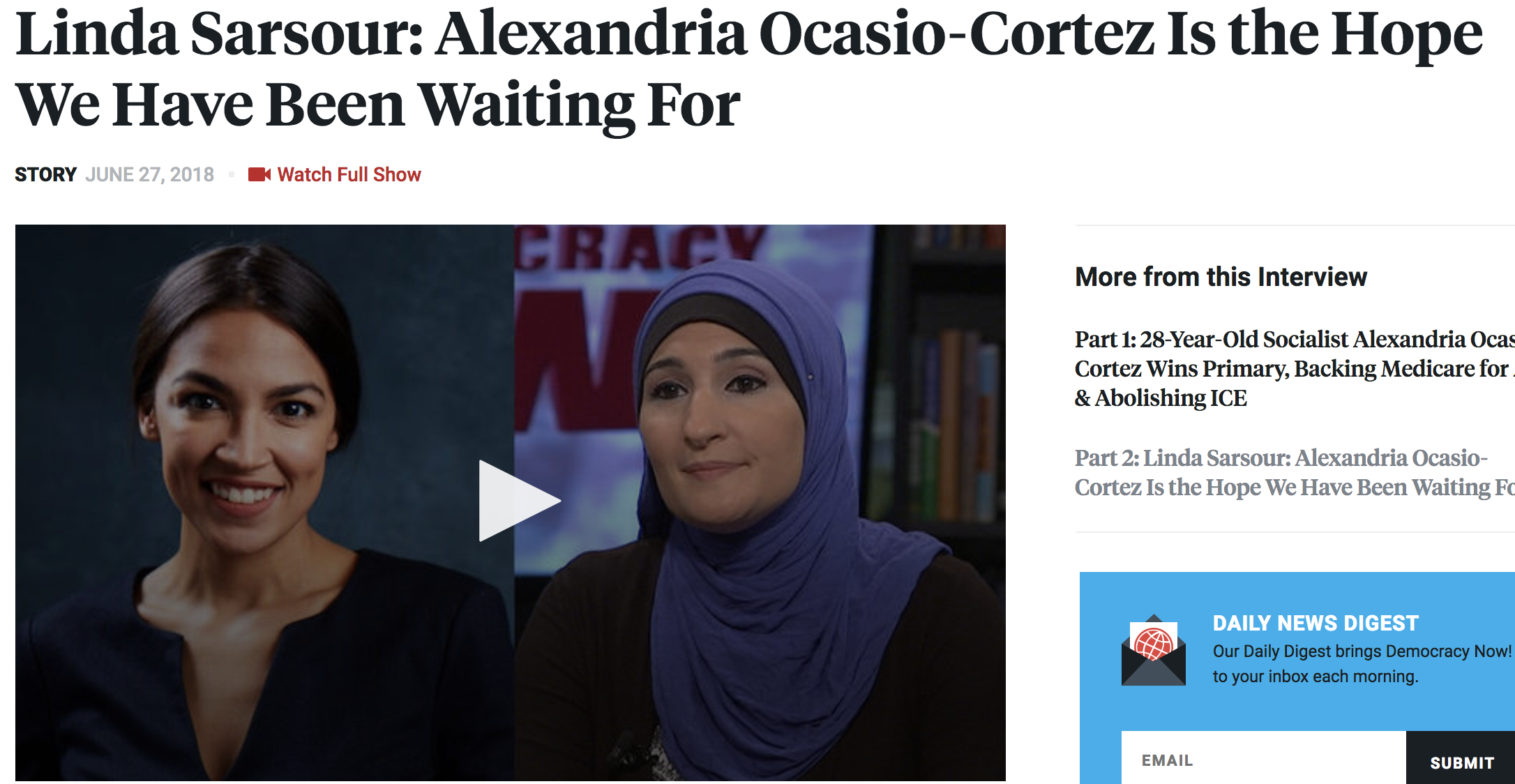 AMY GOODMAN: In a moment, we’re going to talk about the travel ban, but Linda Sarsour is with us, director of the first Muslim online organizing platform, MPower Change. You supported Alexandria. This is a remarkable moment.

LINDA SARSOUR: I mean, in light of such horrible news yesterday with the travel ban and the Muslim ban, Alexandria is the hope that we’ve been waiting for. She is a young woman of color. She’s Puerto Rican. She’s a Socialist, just like me. We are both card-carrying DSA members. And she’s pro-Palestine, and she’s unapologetic. And the movement right now is elated, because this is what you’re going to see, Amy, in this election season. It’s a new day, a new generation. And Alexandria is what represents us and our values.

. . . [Ocasio-Cortez] was outraised almost 10 to one. And it’s not about money. It’s about the grassroots organizing. It’s about building power on the ground. It’s about getting voters who have been ignored and marginalized to the polls. And that’s exactly what Alexandria did. She’s charismatic. She’s young. And she was also very progressive, unapologetically progressive—tuition-free college, Medicare for all, pro-Palestine, even in the recent Great Return March putting her voice out there while she was campaigning, not afraid of any opposition that was going to come her way. And that’s the new kind of folks that are going to win. So, no Democrat is going to hold their seat for too long. And a lot of Alexandrias are coming this 2018 and 2020.

You can read about the “Great return march” in Wikipedia. It is, in short a call for the “right of return” that would destroy Israel as a state:

On 30 March 2018, a six-week campaign composed of a series of protests was launched at the Gaza Strip, near the Gaza-Israel border. Called by Palestinian organizers the “Great March of Return” (Arabic: “مسیرة العودة الكبري”‎), the protests demand that Palestinian refugees and their descendants be allowed to return to the land they were displaced from in what is now Israel.

With a friend like Linda Sarsour, and an endorsement from same, Ocasio-Cortez doesn’t need enemies! You know what “Pro-Palestine” is code for, too.  But of course it pays, electoral-wise, to be friendlier to Muslims than to Jews, for Democrats, especially those on the extreme Left, see Jews as oppressors and Muslims as the oppressed.

Finally, there’s this, in which Ocasio-Cortez touts Ilhan Omar, a Somali woman in the Minnesota state legislature.

Drawing attention to the apartheid Israeli regime is far from hating Jews. You are a hateful sad man, I pray to Allah you get the help you need and find happiness. https://t.co/SvEXjlxlEN

Just keep it up, Democrats—a party once friendly to the Jews, now siding with regressive elements of Islam. You want four more years of Trump in 2020? Just keep cozying up to people like Sarsour and Ilhan Omar.

81 thoughts on “Alexandria Ocasio-Cortez: Another lionized Democrat cozying up to anti-Semites”