Stuff like these letters—particularly the last one—make me despair of the future. Fortunately, I’ll be dead when my Left has been completely co-opted by intolerant Social Justice Warriors. Reader Gary sent me three links to letters in The Oregonian (the local daily paper) by students from Grant High School in Portland, Oregon. (Portland, of course, is the placenta for Antifa and Social Justice Central.) Click on each screenshot to see the letter.

The first two are from students (one conservative, one apparently moderate) who criticize the lack of “viewpoint diversity” in their school, meaning that conservative viewpoints aren’t tolerated. Apparently there are students with who harbor conservative views, but they’re afraid to air them because they’ll be ridiculed and demonized. The third letter is absolutely stunning in its pomposity, its certainty, its intolerance, and, most of all, in its claim that free speech for conservatives simply serves to “legitimize hate”. Already in high school, the two students who wrote that last letter are so mired in identity politics that they’ll never extricate themselves, and will hector both Right and Left for the rest of their lives.

I’ll give a few quotes from the letters, but read the last one in particular to see what the future holds for Americans: 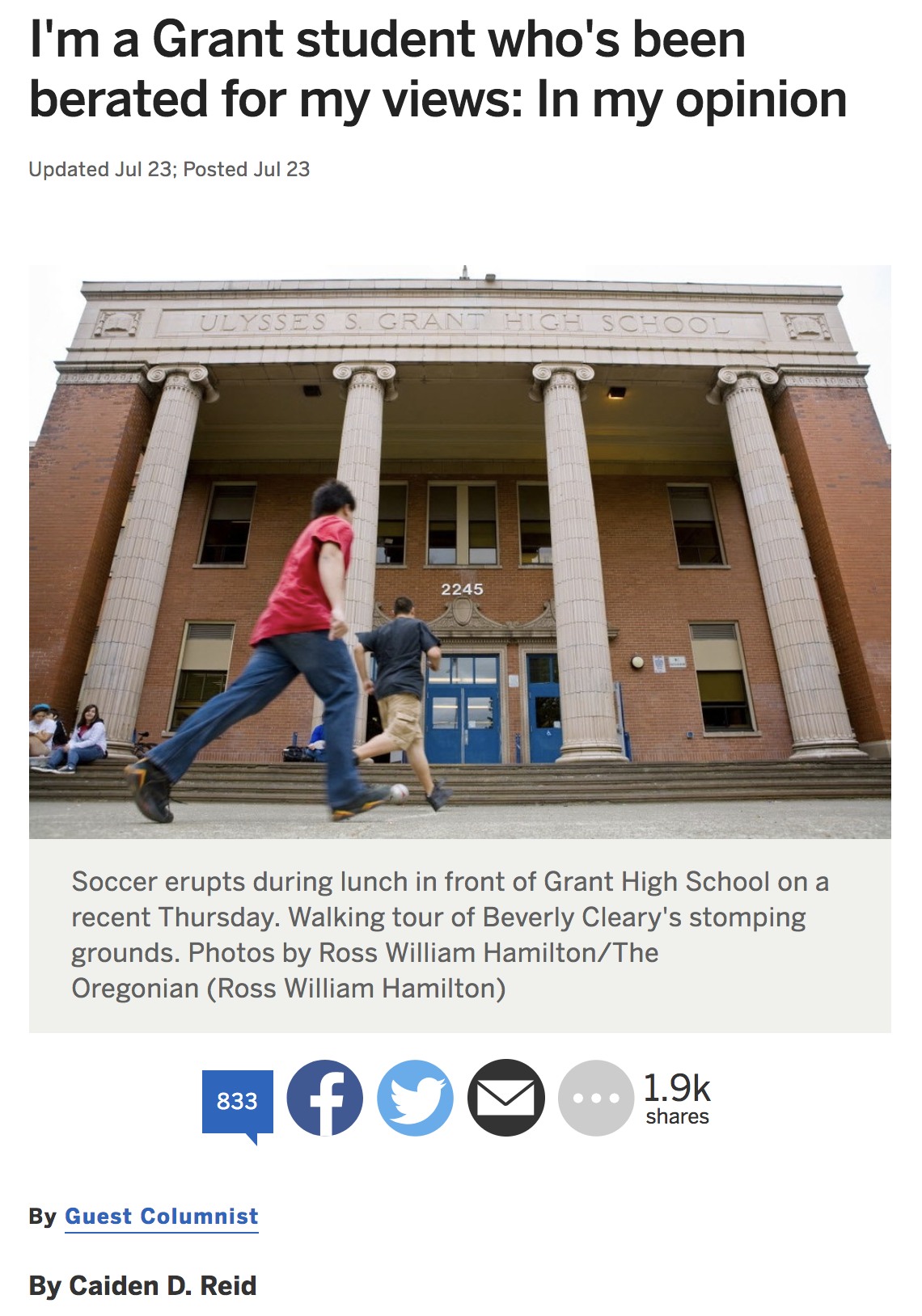 Reid seems pretty conservative, apparently defending gun rights and Confederate statues, which of course will render him untouchable to the students. I disagree with him, but his fellow students’ response to his views, and the tenor of the school in general, seems pretty scary:

At the start of the year, I was lambasted and berated by two people in my U.S. History class for my beliefs regarding Confederate statues and symbolism. I know I presented my beliefs in a polite, direct manner only to be met with screaming, swearing, and other behaviors not acceptable in a classroom setting. My history teacher failed to interfere with this, citing that they were “emotional about their beliefs”. Of course, emotions are often important factors in deciding our actions and ideals, but emotions must be controlled, especially in an academic environment. Instead of countering my belief with facts, logic, or reason, these people expressed themselves using intimidation. They went so far as to tell my football coach that I was a racist and misogynist, which eventually made its way around the school. People wouldn’t talk to me because of rumors they heard about the apparently hateful, bigoted things I said. Allowing pernicious behaviors like this to occur and thrive destroys any chance of developing intelligent leftists who are able to compete in an unbiased academic debate.

In a way, this ideological bubble has pushed me further right, as I wouldn’t have even considered myself conservative at the start of the year. However, numerous instances like the ones described have proved to me that the school has failed its students, both conservative and liberal. I know I’m not isolated in this. Students across the school, state and nation are growing tired of the liberal agenda frequently pushed in high schools and colleges. Privately, students at Grant have admitted that they hold some of the same, conservative beliefs as me, but fear social isolation or ridicule for publicly expressing them.

These are the minds that Grant seeks to nurture, develop and protect. But Grant is not doing them any favors by allowing a learning environment to become as twisted and corrupt as it currently stands.

Here’s a more moderate student who mourns the loss of free discussion at Grant: 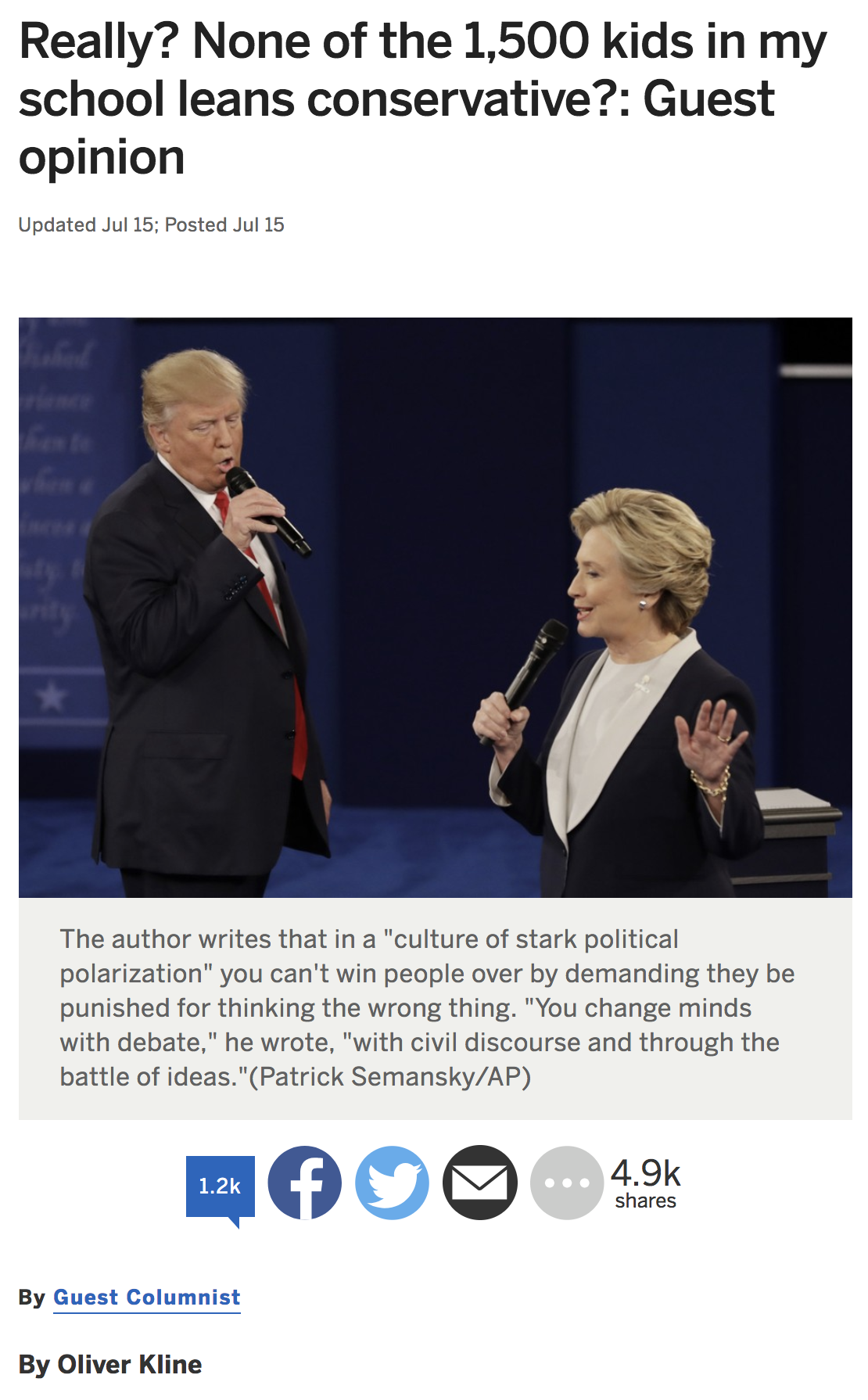 The ideological monotony within my school is painfully obvious. I’m now entering my fourth year in high school, but have yet to meet a single student willing to openly declare himself a Republican. Is it really possible that, out of the 1,500 kids in my school, not a single one even leans conservative? No, it’s not. Instead, a number of students have told me privately that peer pressure and their fear of incurring the wrath of today’s blasphemy-hunting political scolds has led them to keep silent.

Don’t get me wrong, I am not a conservative, nor am I a Trump supporter. But I’d like to be able to talk to one, to debate with one, to learn from one. However, in an atmosphere where different ideas are met with harsh disapproval, this simply cannot happen.

. . . In any event, condemning and shaming people won’t change any minds. In a culture of stark political polarization like ours, you cannot win people over by demanding they be punished for wrong-think. You change minds with debate, with civil discourse and through the battle of ideas. You demonstrate your ideas are better by using evidence and reason, not coercion and disciplinary measures.

I ought to know. As captain of our school’s “Mock Trials” club and a member of the national championship Grant High School Constitution Team, I’ve seen the power of free and open debate in action. It is America’s greatest weapon. It is the means by which the founders of this country forged a nation from 13 disparate colonies and by which today’s majority national consensus in favor of civil rights, women’s rights, gay rights and care for the environment was constructed. This consensus did not exist 50 years ago. It was midwifed by free speech and open debate.

. . . .when the question “Do we, as a school, need more diversity of opinion?” was asked to a class of mine, all twenty-plus students unanimously agreed that we do.

Some said that they would like to hear another point of view. Others said they’d like to share their own. But every student agreed that more needed to be done to foster a culture in which ideas, regardless of where they fall on the political spectrum, can be shared openly and freely.

I honestly don’t know the answer to how we can revitalize free speech, civil discourse and all-night coffee shop debates.  But I do know how to find the answer: let’s debate it.

Some of my University of Chicago colleagues and students—not to mention alumni—who signed a petition to ban Steve Bannon from speaking here this fall, don’t have near the perspicacity of this young man.  In fact, they’re closer to the two signatories of the following letter, whose prose is not only unbearably hectoring and pompous, but whose message is that free speech is not okay if it comes from conservatives. Mark my words, Ms. Ernst and Mr. Quinn-Ward will, in a few years, be wearing black bandanas over their faces and throwing flaming trash cans through shop windows. 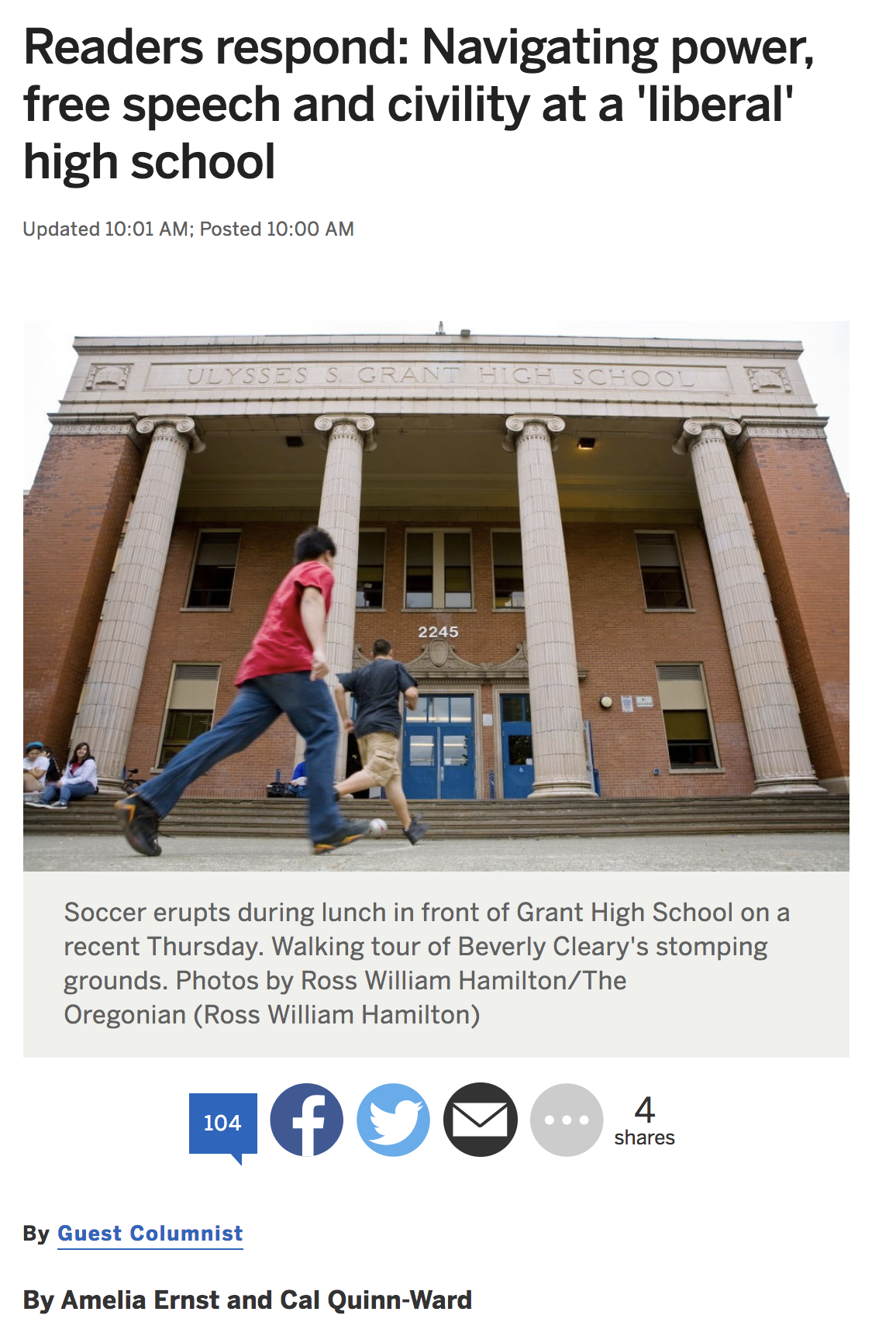 Read and weep. A sample, which begins by questioning the motives of the students who wrote the first two letters:

In an attempt to prove their point, both pieces victimize conservative voices and provide superficial perspectives that fail to address power structures. As students who have attended Grant, we have the necessary situational understanding to break down these complaints and address the larger context to the rhetoric of free speech.

At the core, these students are not arguing for free speech. They are merely upset that reactions to opinions — often founded in hate — are not presented in a palatable manner. This argument is a poor effort to try to mask their perceived entitlement to respect and civility, no matter their opinion.

Nope, because the only true free speech is that uttered by Ernst and Quinn-Ward, the Deciders. Their letter goes on, explaining carefully why there can’t be conservative speech in their school:

Within the walls of Grant, conservative ideas may be met with resistance, but it is crucial to recognize that the school is not isolated from the country’s political landscape. To suggest that conservative ideas are being marginalized is to ignore the immense institutional power that these voices hold. The funding schemes and media-backing of these opinions should not be taken lightly. Opposition to conservativism does not equate to the systemic oppression that marginalized groups experience.

The cry that one’s ‘free speech’ is being infringed upon is often employed as a tool to distract from analyses of oppressive structures and promote a reactionary agenda. The far right is quick to draw attention to the seemingly outlandish responses they garner. In doing this, they divert from legitimate critiques of the deeply embedded white supremacy and fascist undertones of their movements.

Like prize dogs at Westminster, the familiar old words of the Control Left are trotted out, the prose liberally larded with the words “fascist”.  And these high school “fascists” are, the authors contend, simply racists. At this point I’m having stomach pains reading the letter, so I’ll conclude with some choice polemic by the two authors:

While it is not the students’ intention, both students seem to classify oppressive ideas as just another different point of view as they make the call for a diversity of opinions. To consider chauvinistic rhetoric simply another perspective worth hearing out is to give fascism a platform.

. . . The published articles ignore the actual culture of hostility towards working-class students, students of color and queer students while labeling those who display casual racism to be an oppressed group.

As of right now, we are in a struggle for control, not a dialogue. Making room for reactionary voices will further legitimize hate. Instead, let’s start having critical conversations and get to work dismantling power imbalances. Only then, will we have the equal footing that is fundamental to speech that’s truly free.

And that is the crux of the matter. These students want to control the discourse, and until they are able to do that—and nobody’s allowed to perpetuate “power imbalances” with their words—then they’re not going to allow free speech. Dissenters will be shouted down and demonized. In fact, of course, these authors would never allow free speech as the American courts have construed it, because they’d deem that “hate speech.”

I’ve pondered long and hard what it means to prohibit free speech until “power imbalances” are corrected, and all I keep coming up with is that the authors of this letter are the true fascists, whose “power balance” involves they and their favored groups wielding the levers of power and casting everyone else into the void. I despise Trump, but the kind of views these two students promulgate will serve to keep him and his like in power and, in fact, come perilously close to the kind of authoritarianism that we so despise in Trump.