Well, we’re down to four ducklings now, as one apparently flew the coop (or rather the pond) last night. So we now have on hand (or rather on wing) Honey, who is temporarily flightless because of her molt, and four of the eight ducklings, including the small one who is bullied, Phoebe.

But first let’s hand it to Honey for having now fledged eight ducklings in the last year. With luck it will be an even dozen.

The good news is that Phoebe appears to be coming out of her cowering state a bit, and looks pretty good. While the other ducks don’t let her join them, she is swimming about and I was able to give her a good meal this morning. This is in contrast to yesterday, when most of the time she was cowering on the duck island, alone. She’s still emitting heartbreaking quacks from time to time, but I’m hopeful that soon she’ll join the others in the Big Egress. Here she was yesterday.

Here’s Honey exercising her wings yesterday. You can see they’re strong, but she lacks flight feathers. Note as well the distinctive mottling of her beak, including the trianglular black mark at the junction of her left upper bill and head: her diagnostic feature. 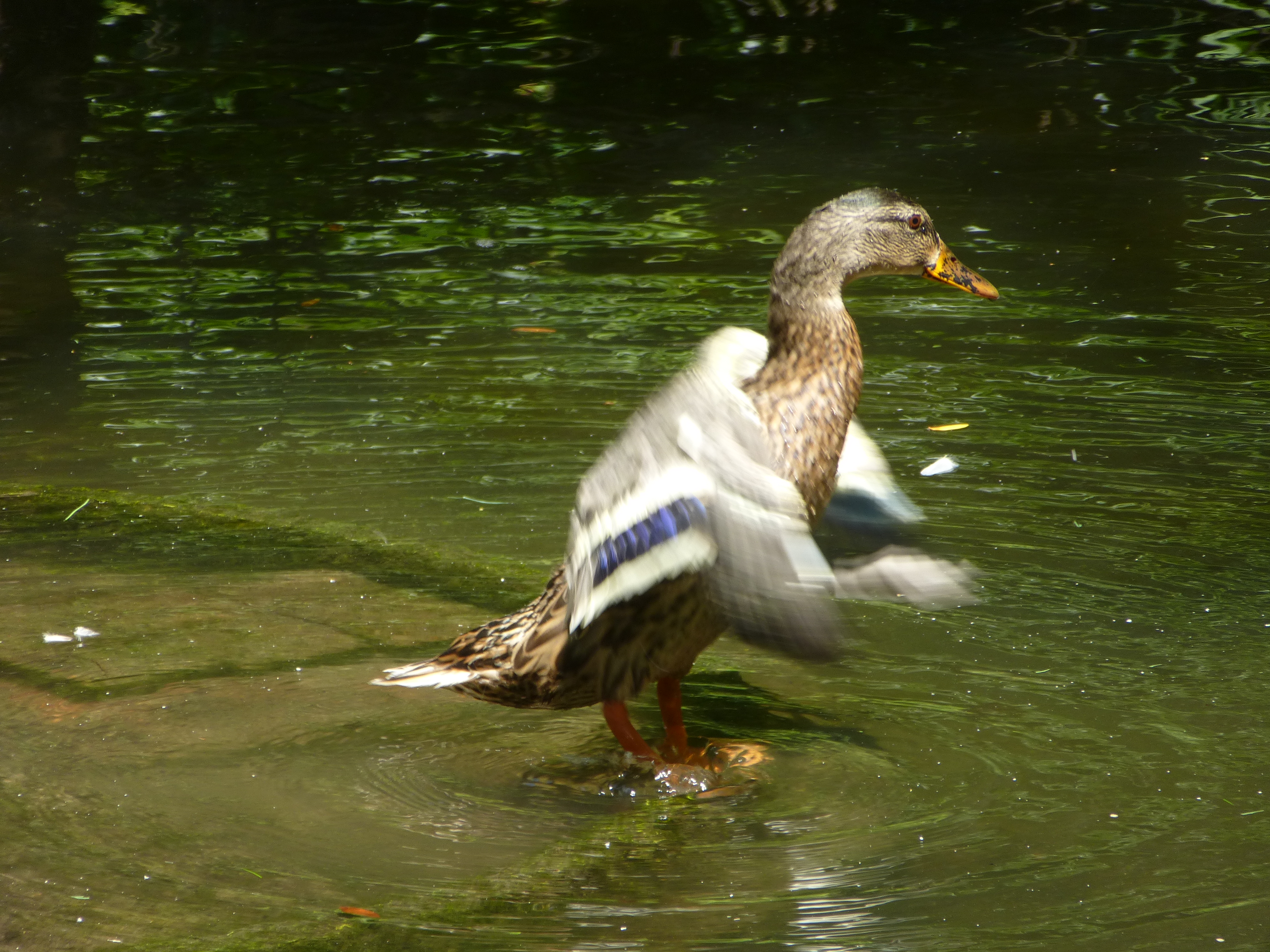 After feeding time yesterday, a remarkable thing happened. First all the ducklings went to the water inlet and reveled and dabbled in the rushing water: 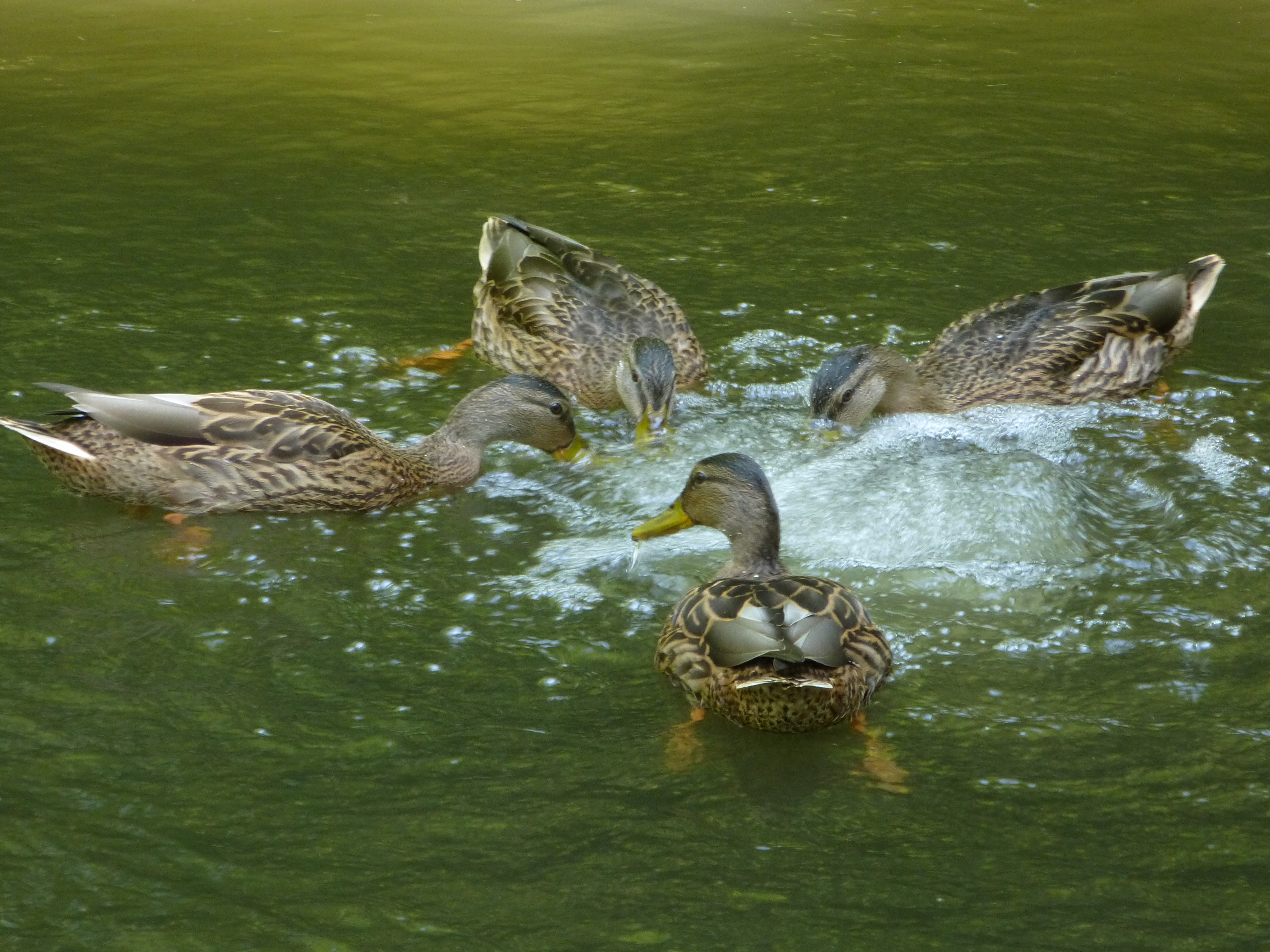 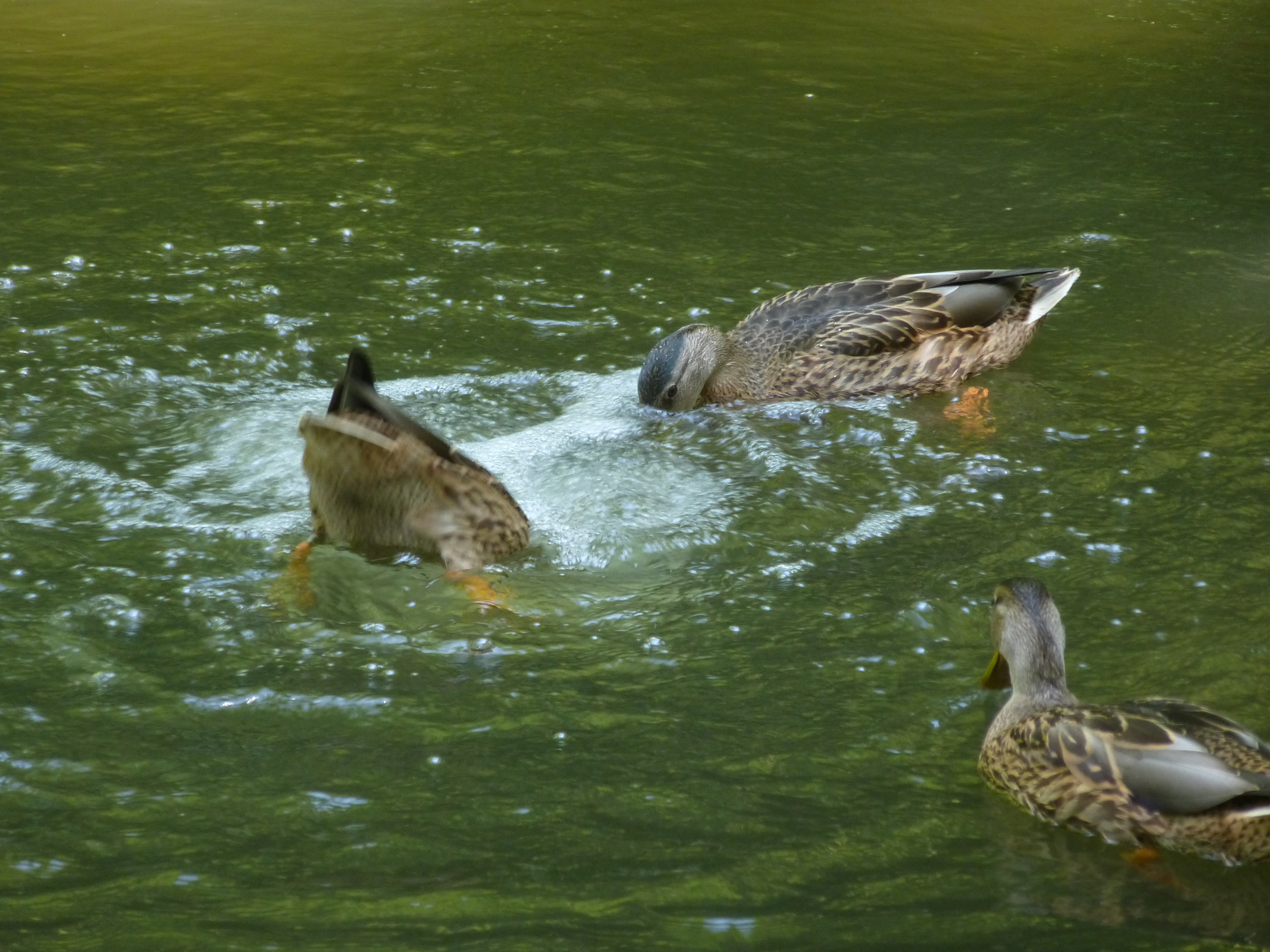 And then they all went nuts, making runs through the pond, diving underwater and swimming a long way (they simply disappeared and reappeared on the other side of the pond. . . 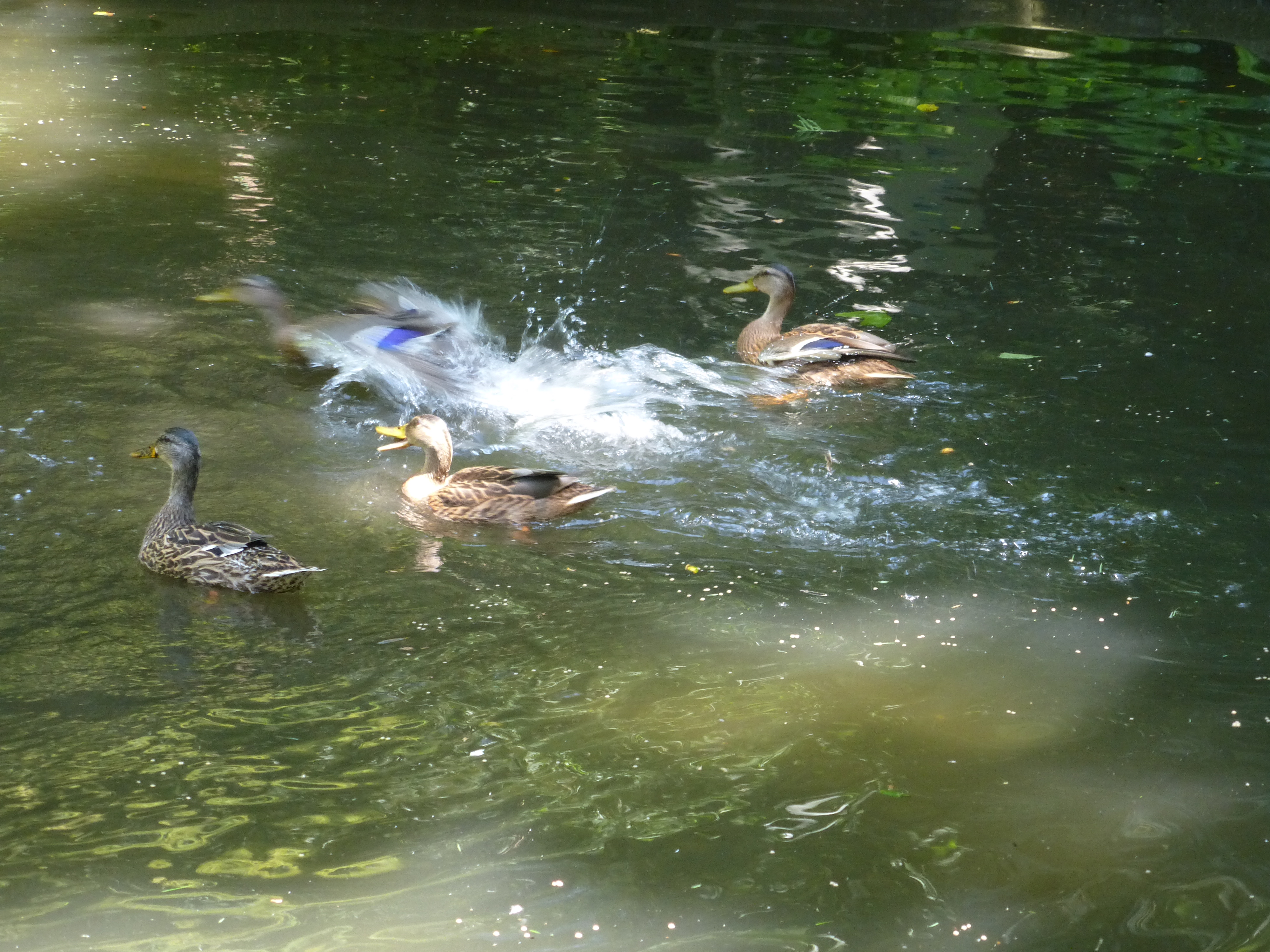 And then they FLEW! They flew all around the pond but didn’t leave it, making long hops, short hops, and skidding into the water as a landing. All of the flying, racing, and diving went on for about five minutes. It was the most amazing thing I’ve ever seen: Duck Crazy Hour, a carnival of flight and fun. I wish the video on my camera had been working so you could see it. I was both amazed and elated at the same time.

Unlike some species of ducks, mallards don’t need a “run” on the water to take off: they can fly up nearly vertically. That’s what this one is doing in the photo below. Their wings must be quite powerful to lift them off this way. 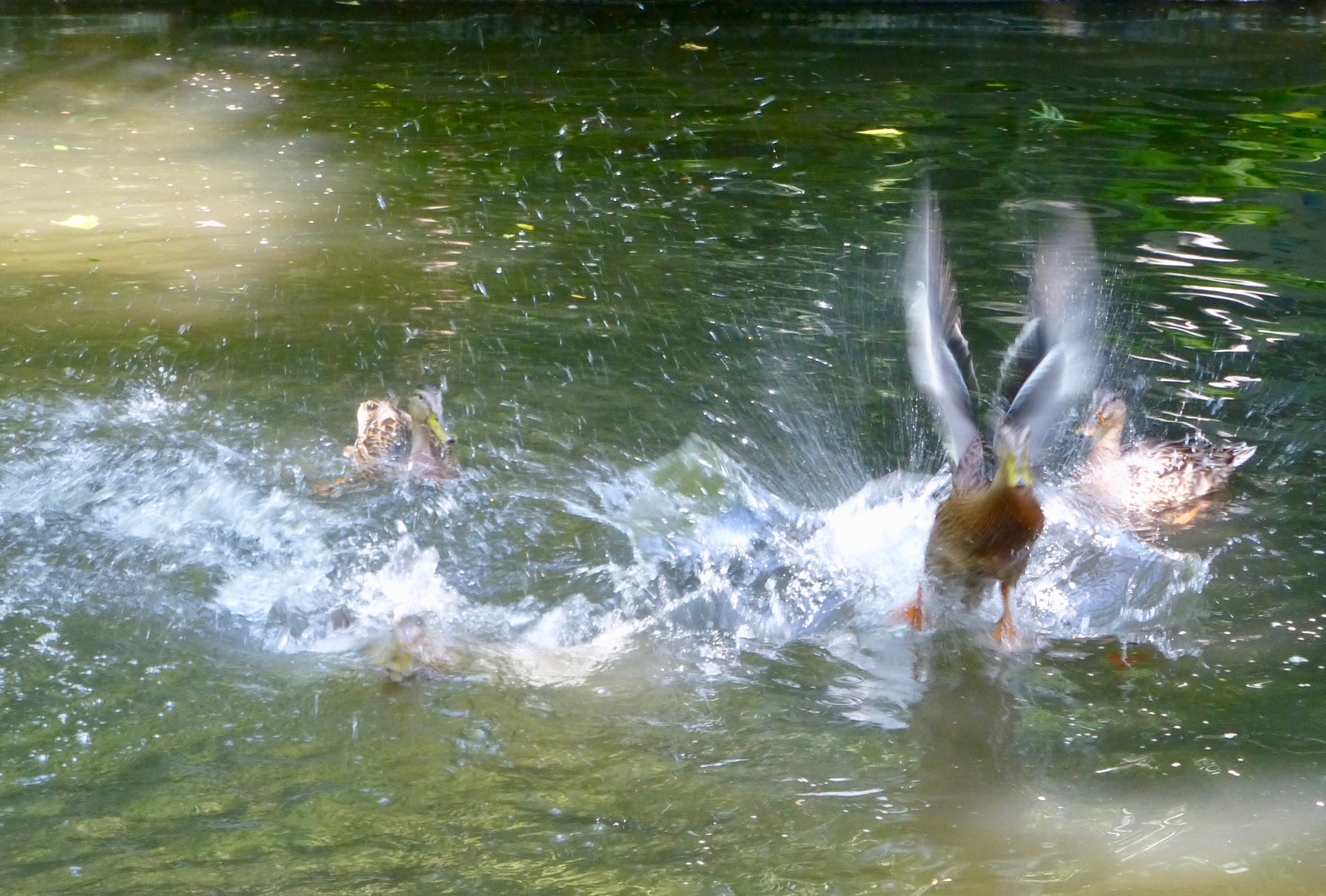 I’m not sure whether they’re testing their wings, practicing flight, or simply having fun. They didn’t leave the pond, but they clearly can, and they flew with great ease. 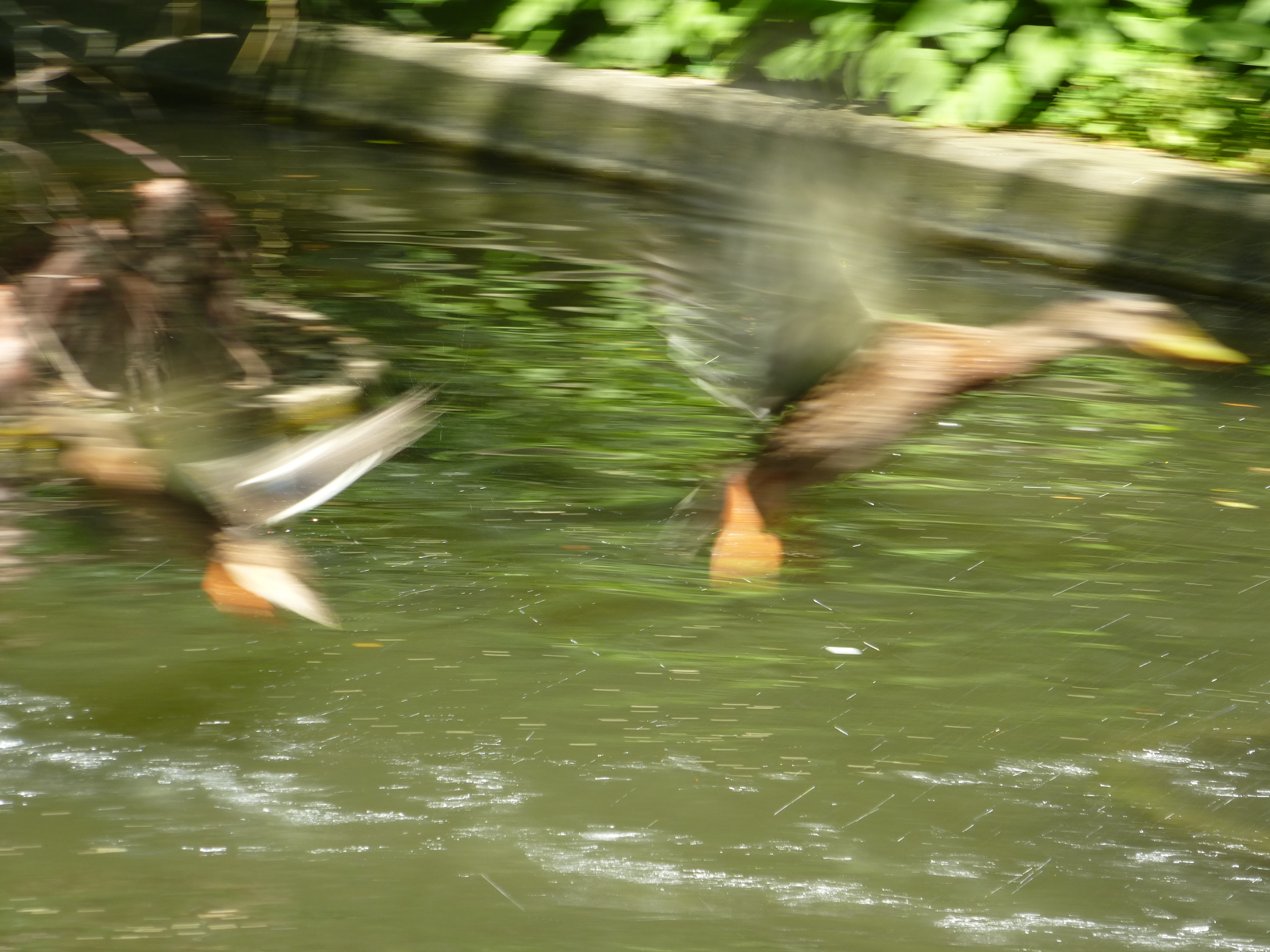 I immediately called Anna to come see the spectacle, but when she arrived nearly ten minutes later the fun was over, and the ducks were grooming, preening, and bathing: 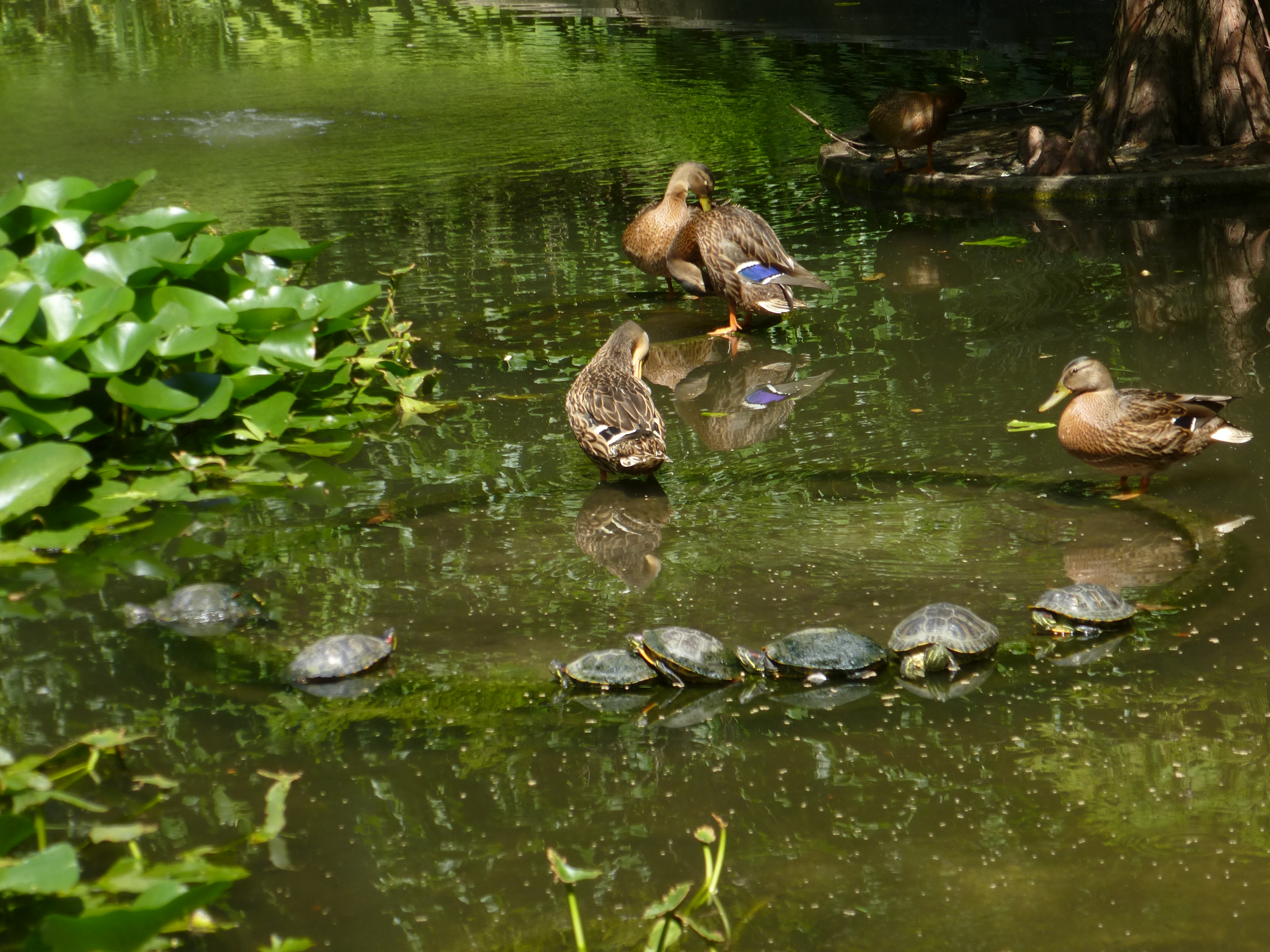 You can see that Honey (foreground) simply lacks flight feathers; compare her to her duckling in the rear, whose wing feathers extend out behind its butt. (It also has a lovely blue-violet speculum.) 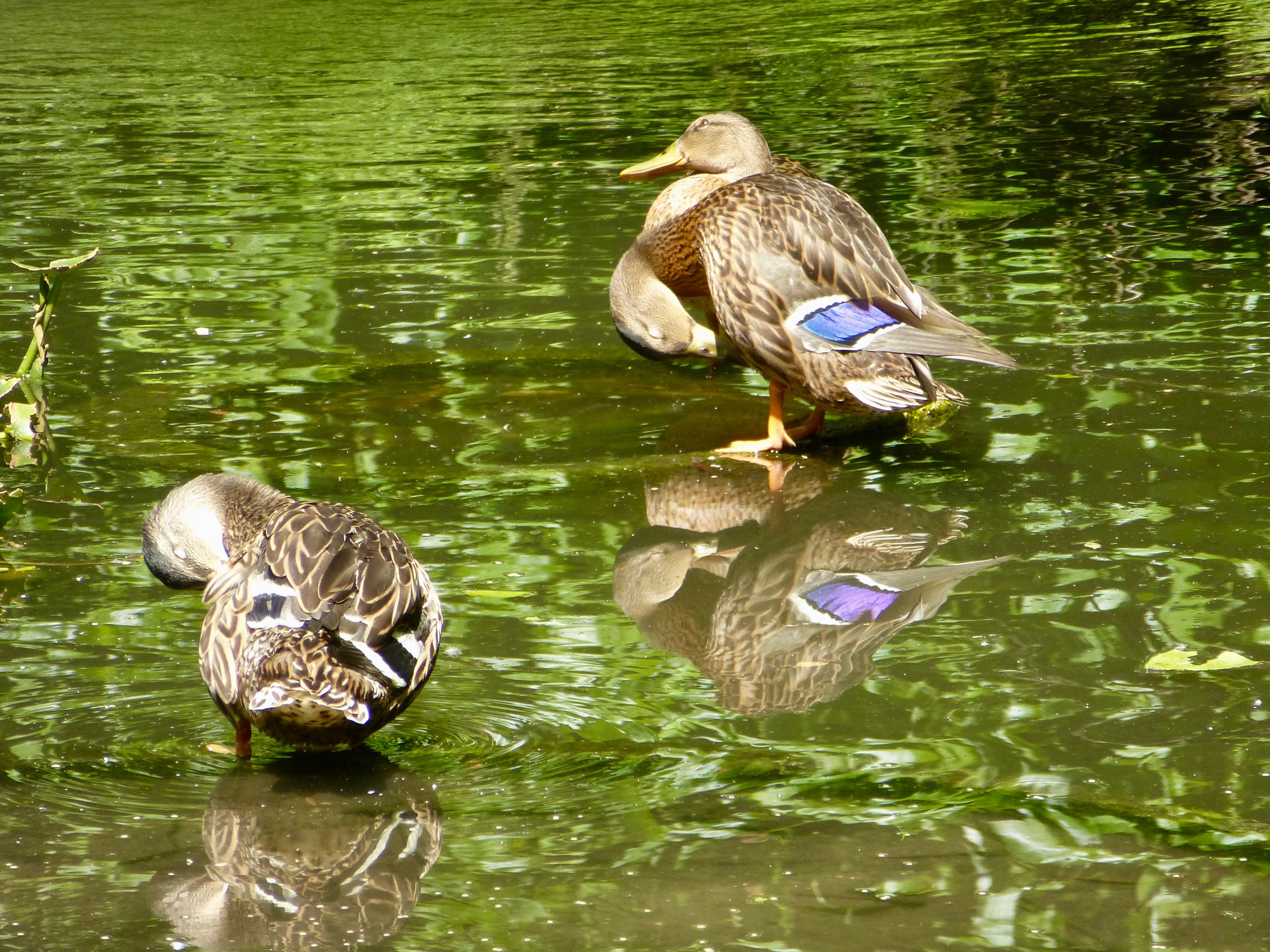 Honey is still being maternal, standing on the cement rings and supervising her brood, even though they’re now pretty independent. I wonder if she has any emotions about their departure? 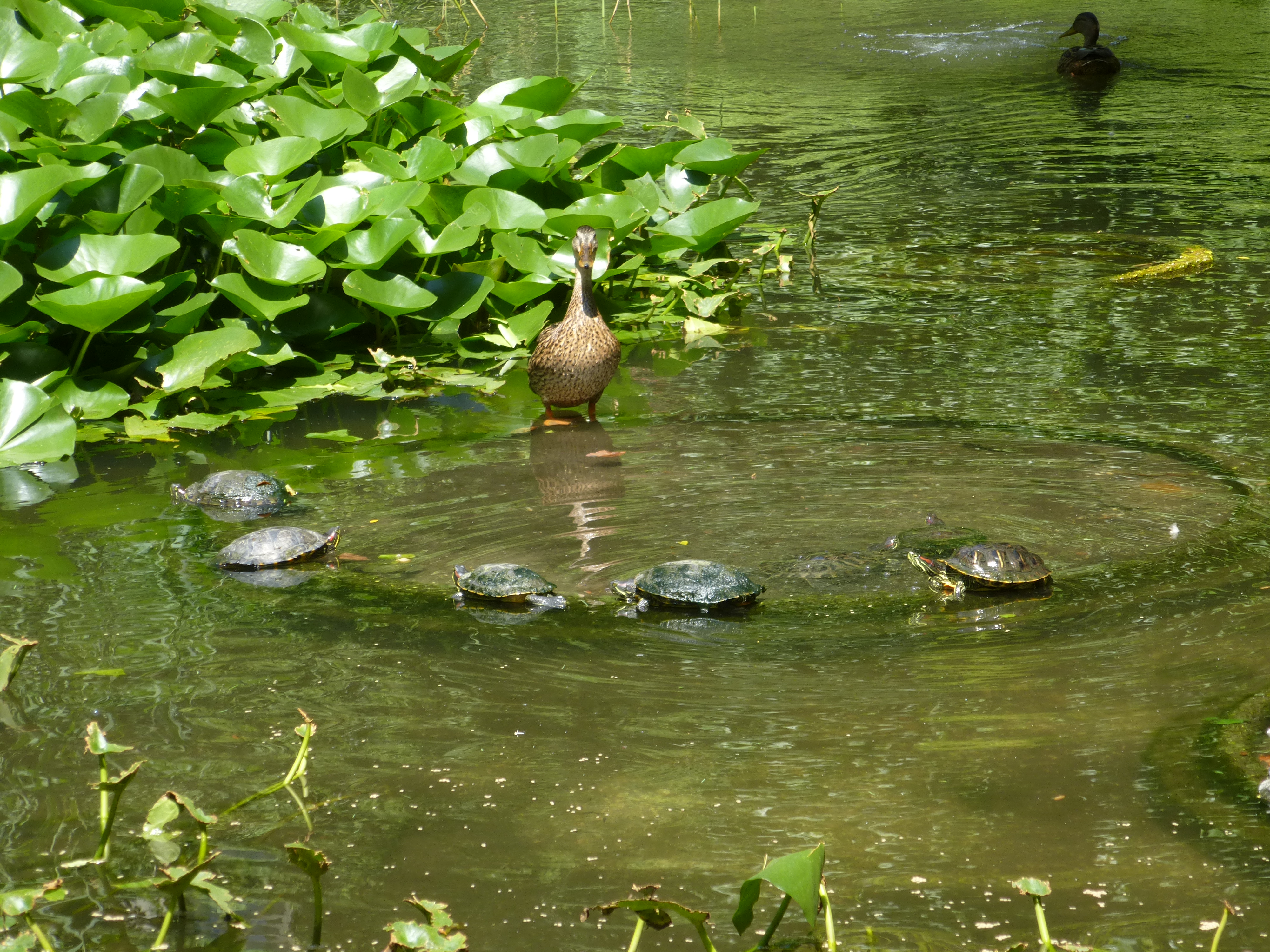 And we mustn’t forget our turtle friends, who are appearing en masse to enjoy the temperate weather and warm sun. Here’s one red-ear climbing atop another one to get the maximum solar exposure. 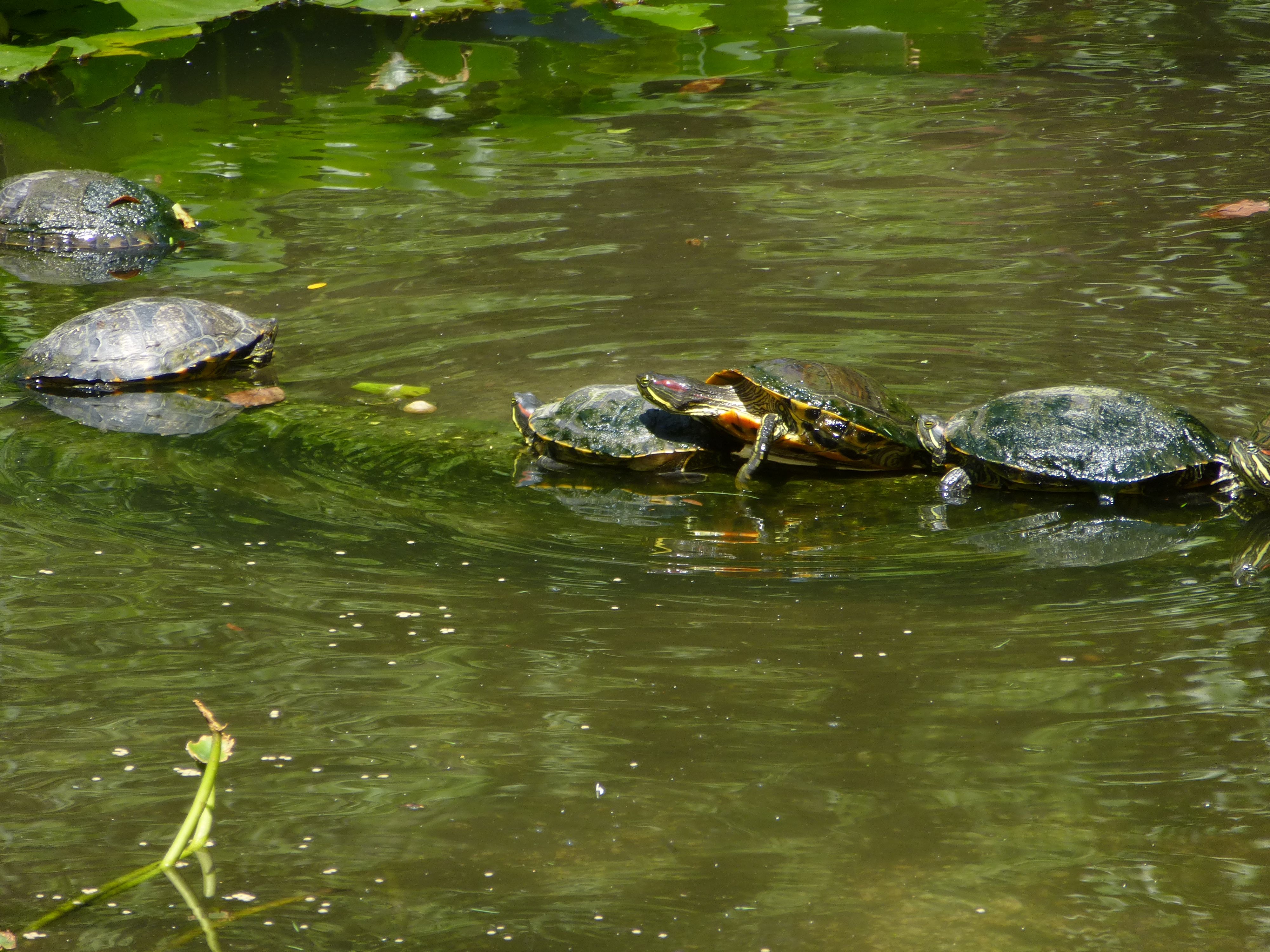 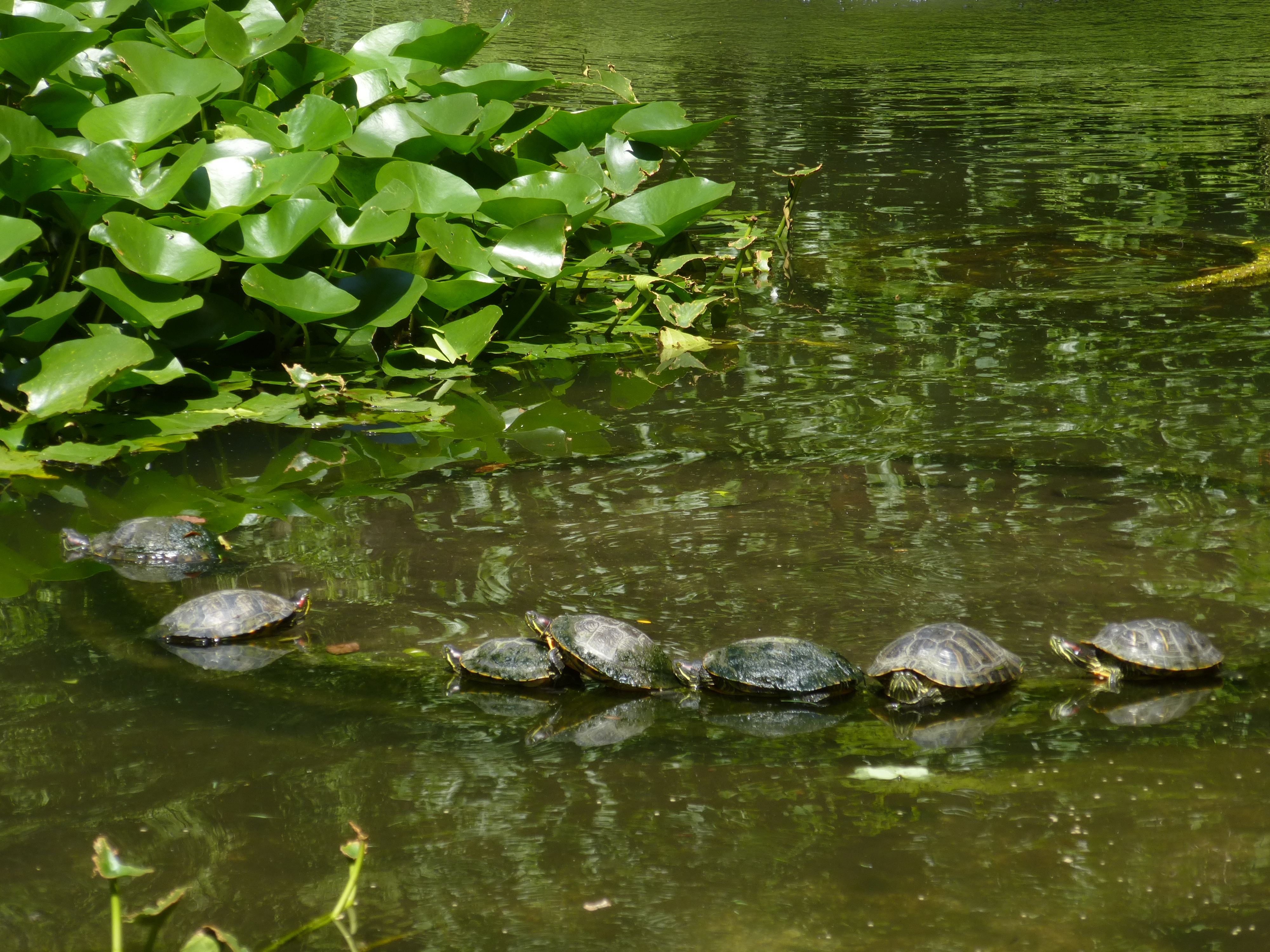 Anna was the last person to see the whole brood together. When she returned from vacation on Sunday evening, she immediately went to the duck pond and reports that they were all there at that time. The next morning three were gone, so they must have flown away on Sunday night (I’ve heard that ducks navigate at night). I photographed Anna yesterday with the remaining crew: 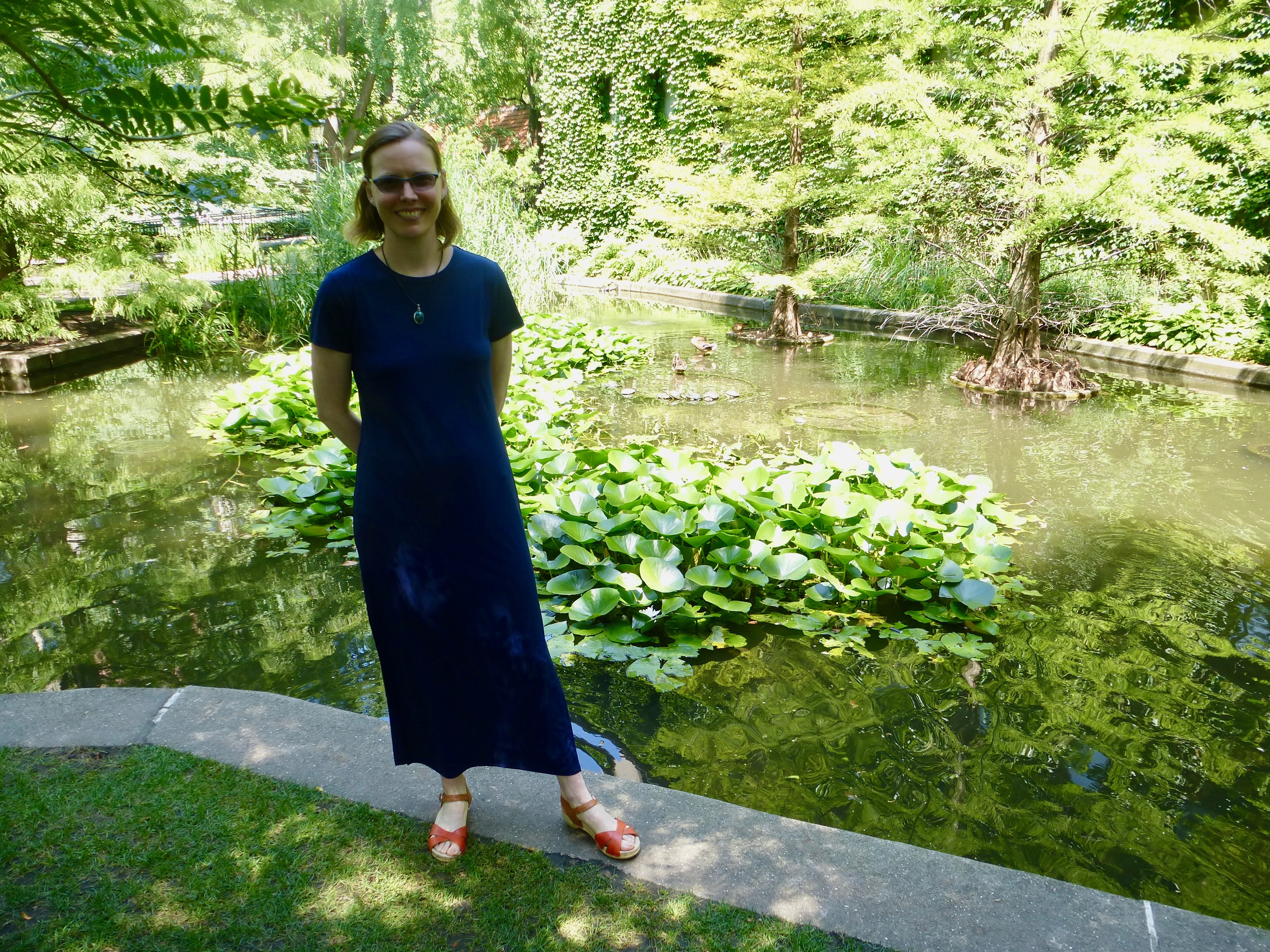 It’s bittersweet to see the ducklings leave one by one (I thought they’d all leave together), but it was inevitable, and I’m really happy that, after the demise of two babies late in May, the rest of them have all survived and thrived (knock on wood for Phoebe!). And I’m happy that Anna and I played a small role in ensuring that they got enough food to give them a good start in life.  Finally, I know Honey will be here for a while, and I’ll make sure she’s amply rewarded for her hard work in raising a brood of eight in a small pond. Long may they fly! 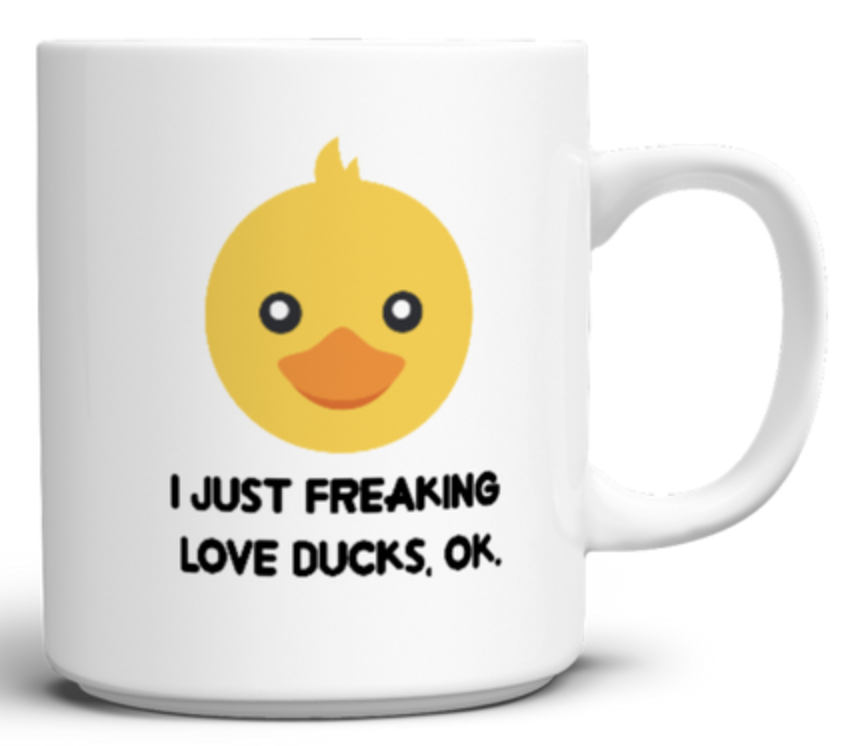