I’ve been sent this story and photo by many readers, and have delayed putting it up. Could it be I was miffed because this duck outdid Honey? At any rate, the photo of a common merganser hen (Mergus merganser) with a train of 76 ducklings has gone viral. The story and one likely explanation is recounted in the New York Times piece (click on the screenshot to see it):

Why is this so popular? Three reasons, I think. The least of them is probably that this is an almost unprecedented number of ducklings tended by one hen. The other reasons are anthropomorphic: we see a huge number of cute baby ducks following mom in a neat line, and we emphathize with a mother who tends all those babies. A minor reason may be because the layperson has a scientific curiosity about how this can happen. But what do I know; I’m just an average Joe who does genetics.

At any rate, some excerpts from the NYT piece, with one explanation below:

A female duck in Minnesota has about six dozen ducklings in her care, a remarkable image that an amateur wildlife photographer captured on a recent trip to Lake Bemidji, about 150 miles northwest of Duluth, Minn.

“It was mind blowing,” the photographer, Brent Cizek, said in an interview. “I didn’t know that a duck could care for that many chicks.”

It’s not unusual to see many ducklings gathered together. Some 20 or 30 have been reported with a single hen. But 70-plus?

MAMA MERGANSER! I was able to track down the now famous Lake Bemidji Common Merganser that has an adopted brood of over 76 babies! I love the story that these photos tell.

The females at Lake Bemidji, many of which are related, lay eggs that hatch around the same time, he said. Afterward, he said, the adult ducks go off to molt their feathers, leaving their broods in the care of a matriarchal female.

“She’d be kind of like the great-grandmother,” Mr. Rave said.

While the practice is common for this species, Mr. Rave said, the size of the crèche in the photo is exceptional. “That’s a lot,” he said. “I’ve seen crèches up to 35 and 50 often, but 70 — that would be a very big crèche.”

Mr. Cizek, the photographer, has gone back to the lake several times to photograph the ducklings as they grow. He said he had seen other adult ducks around the brood, but when Mama swims away, the ducklings follow her.

“Everybody is really just amazed,” Mr. Cizek said. “Everybody keeps saying, ‘Mom of the Year.’”

Now that of course is not necessarily an explanation, for we want to know why this female duck tends so many young. After all, if none of them are her offspring, she has nothing to lose by flying off—unless they contain some of her genes, as suggested by the fact that some of the mothers are related, and may be related to “SuperMom”. We could test that by seeing if this kind of phenomenon is more common in lakes where females are more related. Alternatively, it’s her brood in there, too, and she simply has no way of cutting out the others, while other ducks have everything to gain by parasitizing the care of another female.  I’ll write Bruce Lyon, our Official Website Ornithologist™, to get his take on this.

More photos are here, including this one: 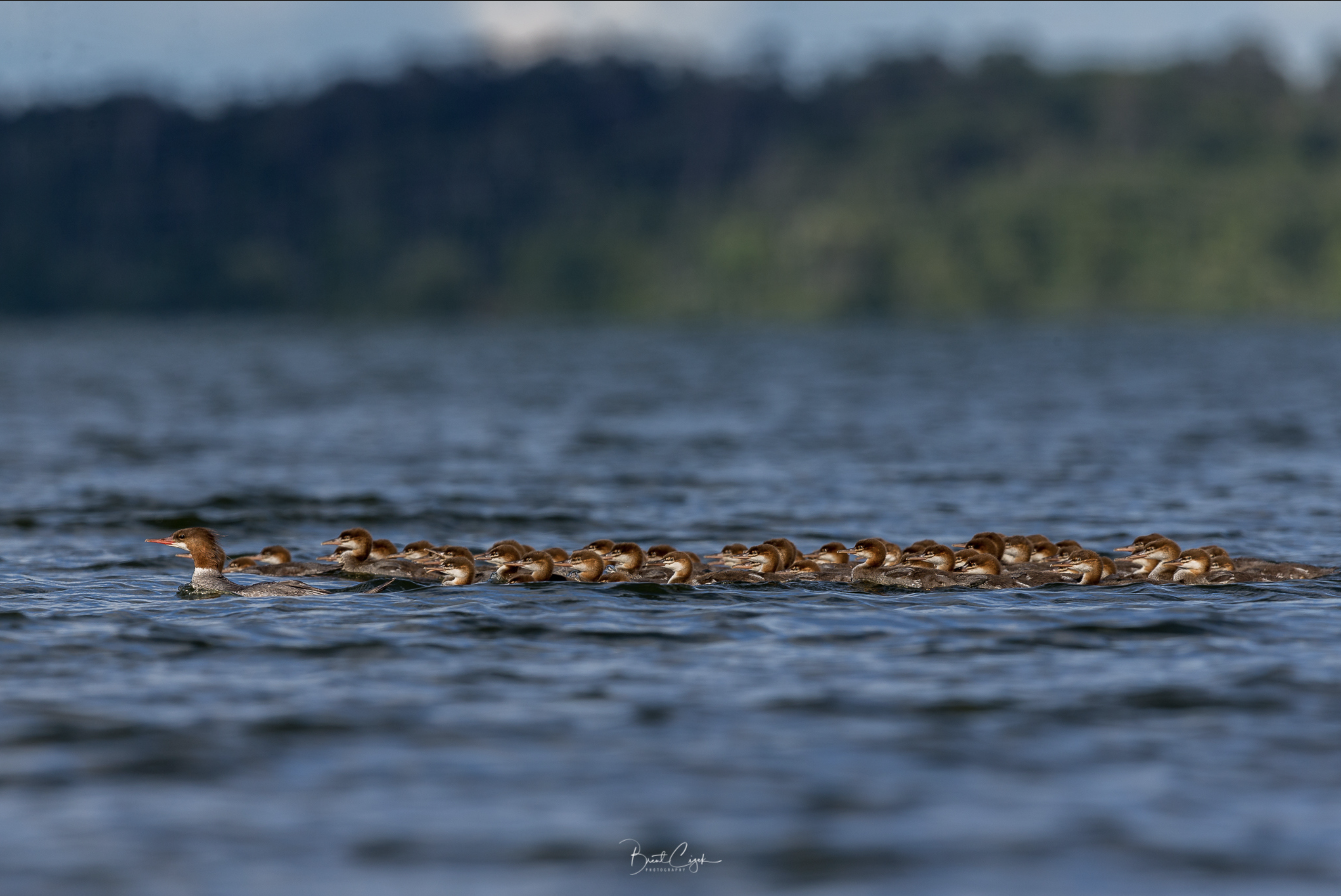 14 thoughts on “76 merganser chicks in the Big Parade”