Today we leave the confines of Earth and look at the vast universe; we have photos from two readers, and their notes are indented. Click on photos to enlarge them.

We have a nebula from Tim Anderson:

Attached is an astrophotograph of NGC6523, also known as the Lagoon Nebula. It is a composite of fifteen 240-second exposures taken with a 127mm refracting telescope and a colour astronomical camera. 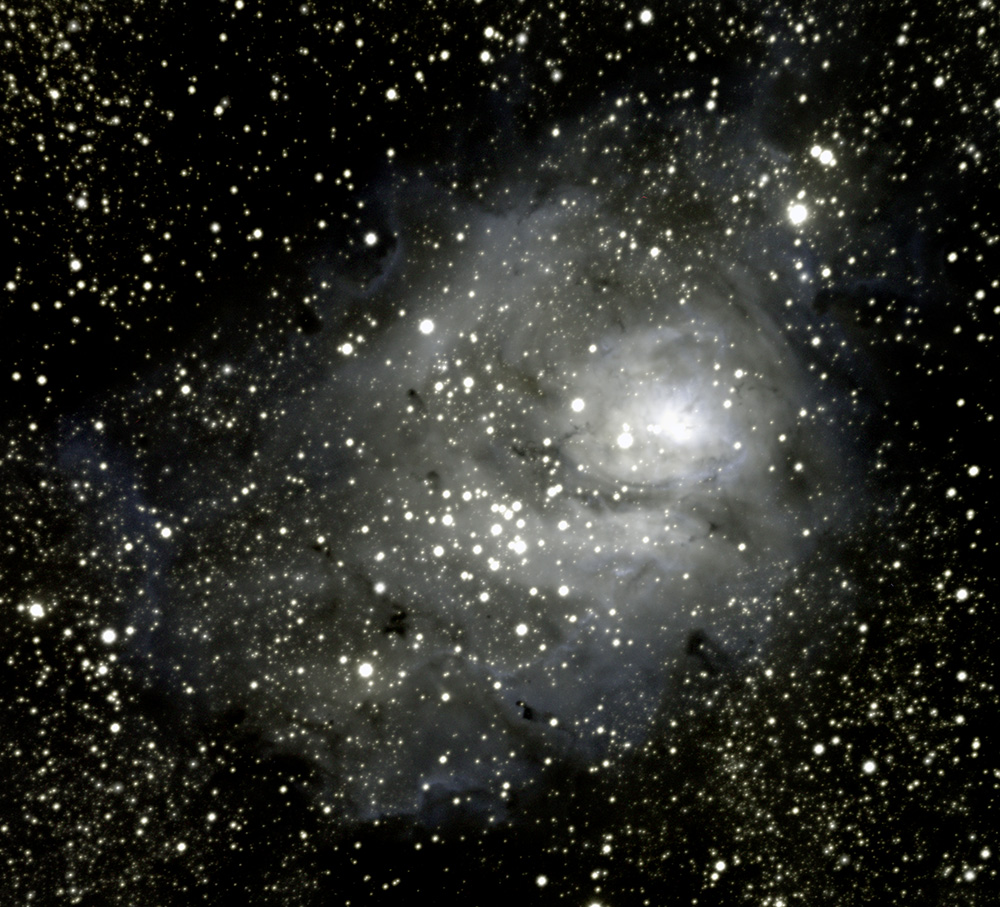 And from reader Don McCrady:

I have  been practicing my widefield astrophotography skills this summer (preparing for a trip to Namibia in September to do even more of this kind of stuff… and I’ll be sure to send you those pictures after I return).  All of these pictures were taken from a Rattlesnake Lake, WA, near North Bend, where Rattlesnake Ridge hides most of the light pollution from the Seattle area.  All used a Canon EOS 6D, mounted on a StarAdventurer tracking mount.

First, a nearly vertical Milky Way rises over Rattlesnake Lake.  This is a single shot taken with a Rokinon 14mm SP f/2.4, at ISO 4000 for 40 seconds.  I used the StarAdventurer at 1/2 sidereal rate to minimize star trailing while maximizing the exposure.  The extremely bright “star” on the lower left is Mars.  The bright lights drowning out the core of the Milky Way are from the watershed education center. 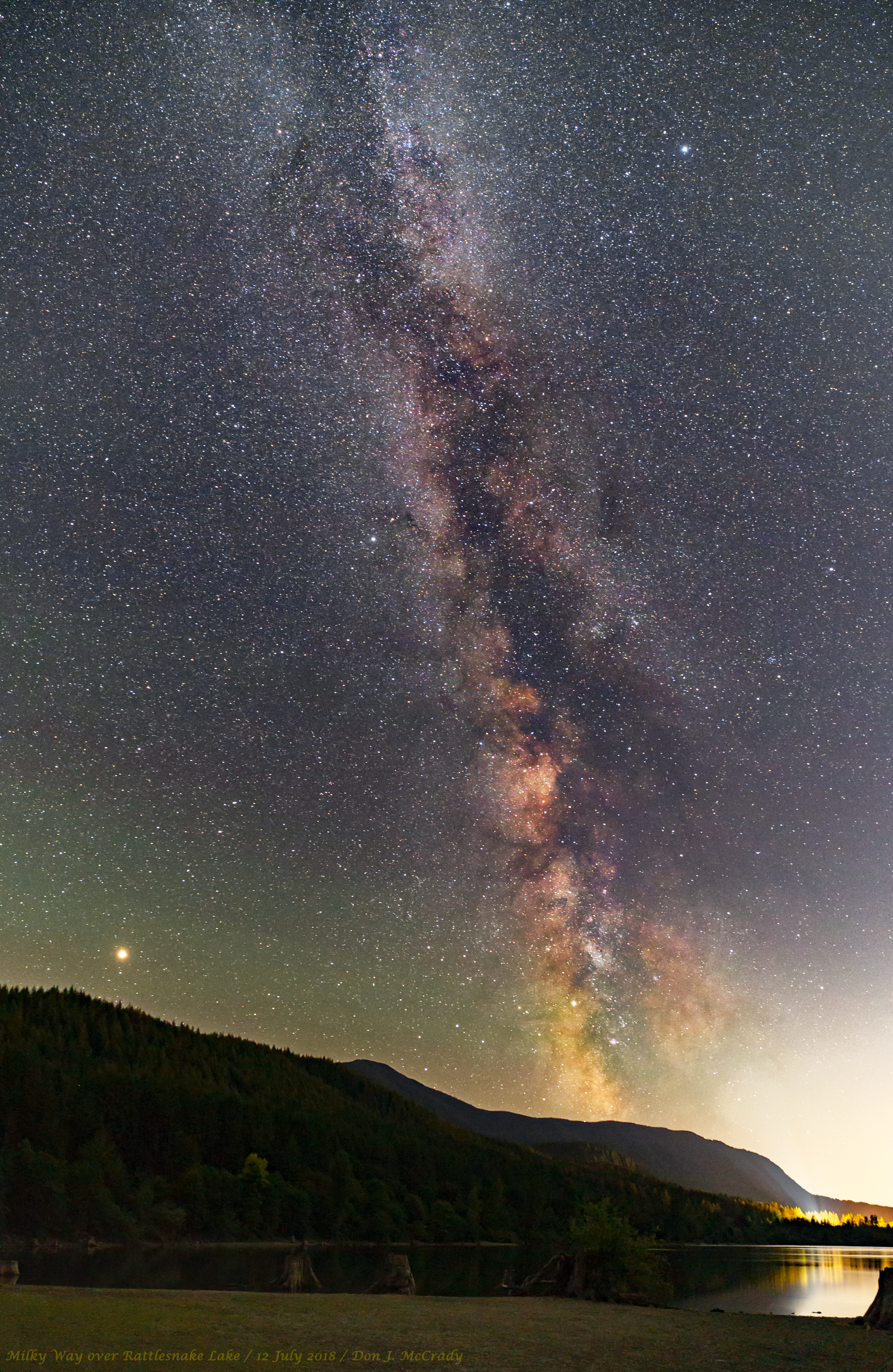 For the following shots I switched to a 200mm lens to zoom in some of the more interesting portions of the Milky Way. This yields a 12 degree angle of view.  These were also tracked at the full sidereal rate for approximately 30 minutes of total exposure.

This field of view in Sagittarius contains three Messier objects (M8 – the Lagoon Nebula, M21 – the Trifid Nebula, and the open cluster M21) as well as several smaller objects such as the tiny globular cluster NGC 6544. The camera was mounted on a Star Adventurer tracking head, using 2 minute exposures. I took this from Rattlesnake Lake, WA, just before the clouds started rolling in. 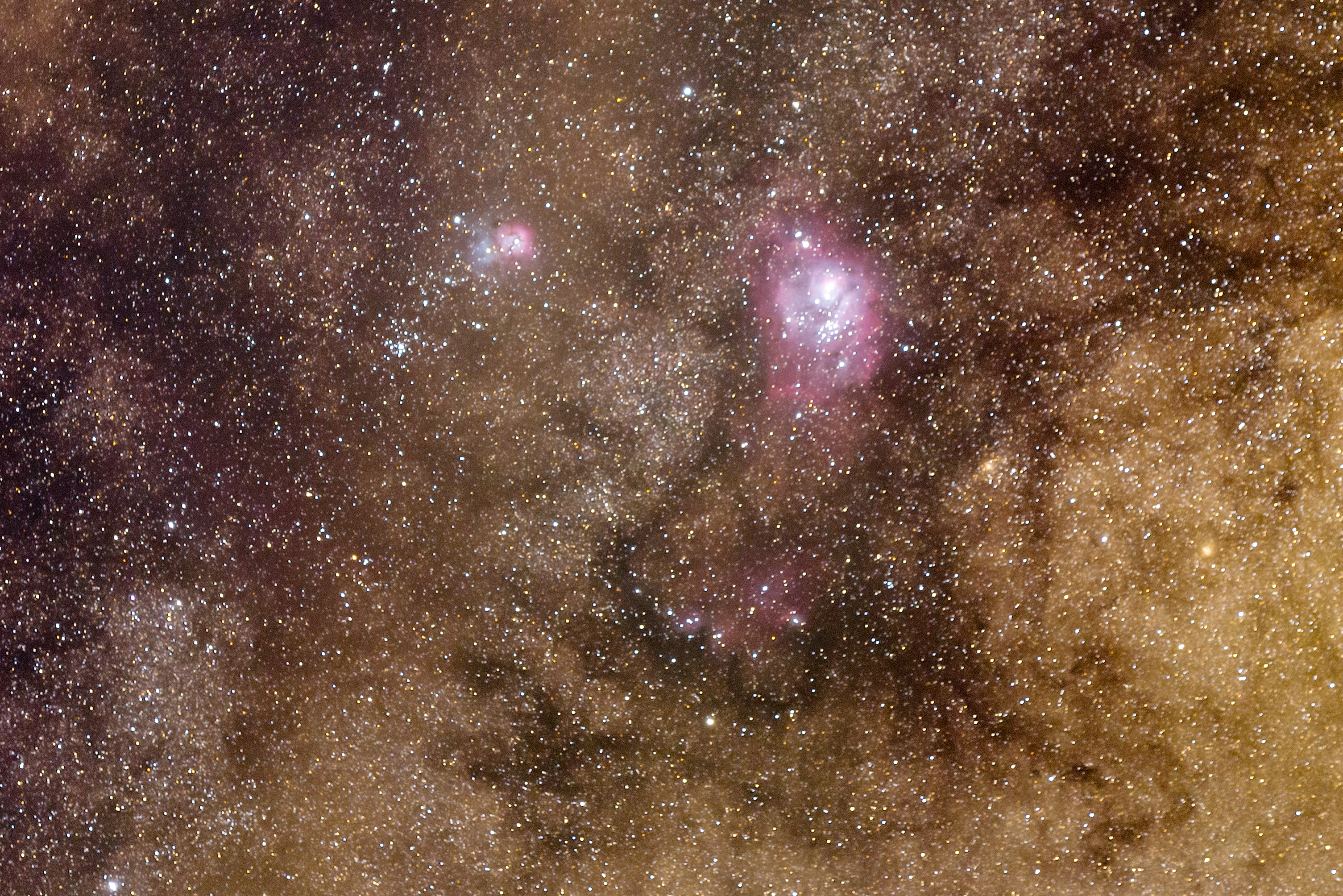 Moving slightly north but still in Sagittarius, this view features most prominently the M24 Sagittarius star cloud near the center, flanked on the right by two very bright nebula:   M17 (the Omega nebula) and then M16 (the Eagle nebula).  Near the top are two smaller open clusters, M25 and NGC 6647.  As a bonus, on the very left of the frame is the planet Saturn. 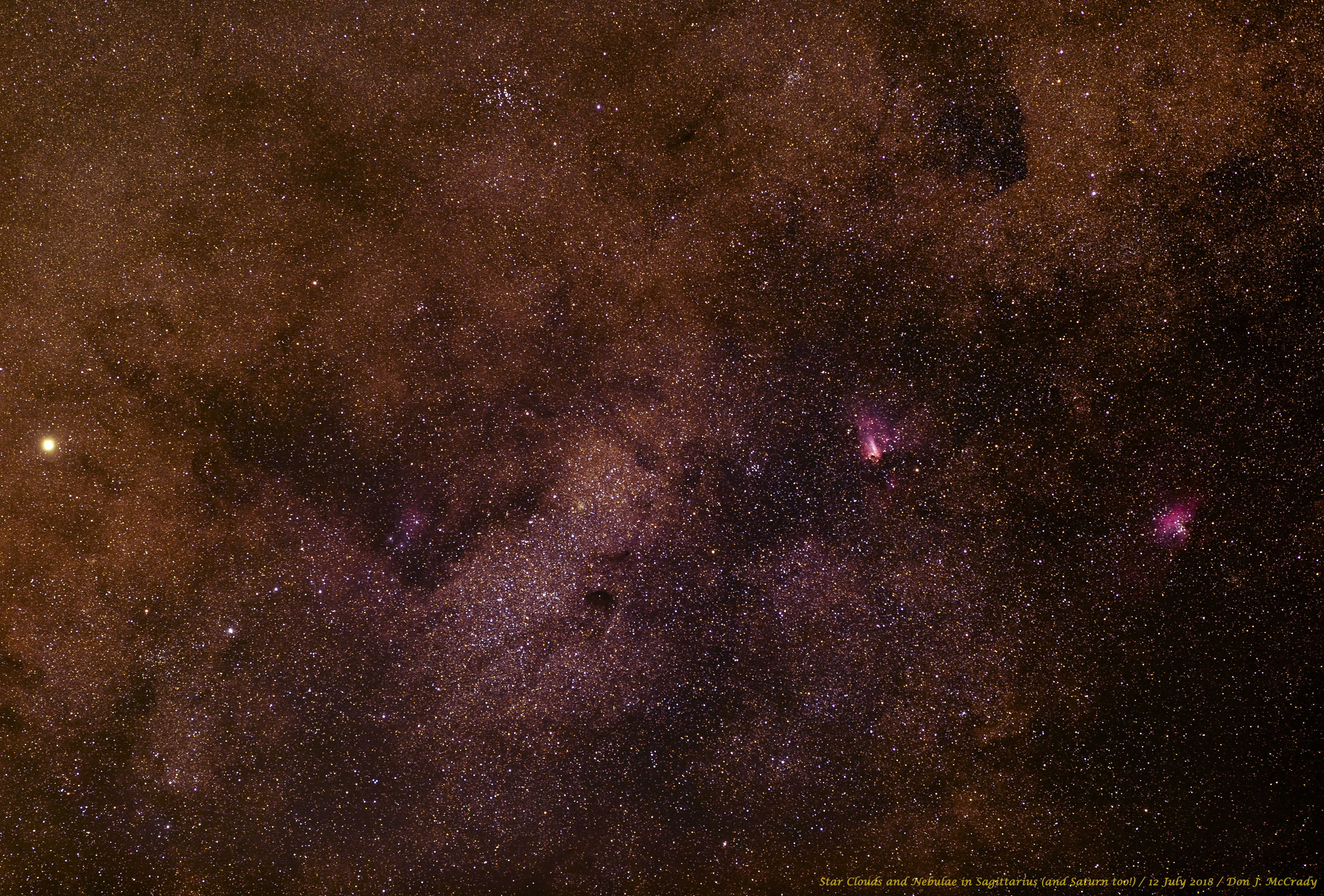 Finally, much farther north in the constellation of Cygnus is this widefield view of the North America Nebula (NGC7000) and its slightly dimmer neighbour the Pelican Nebula (IC 5070). 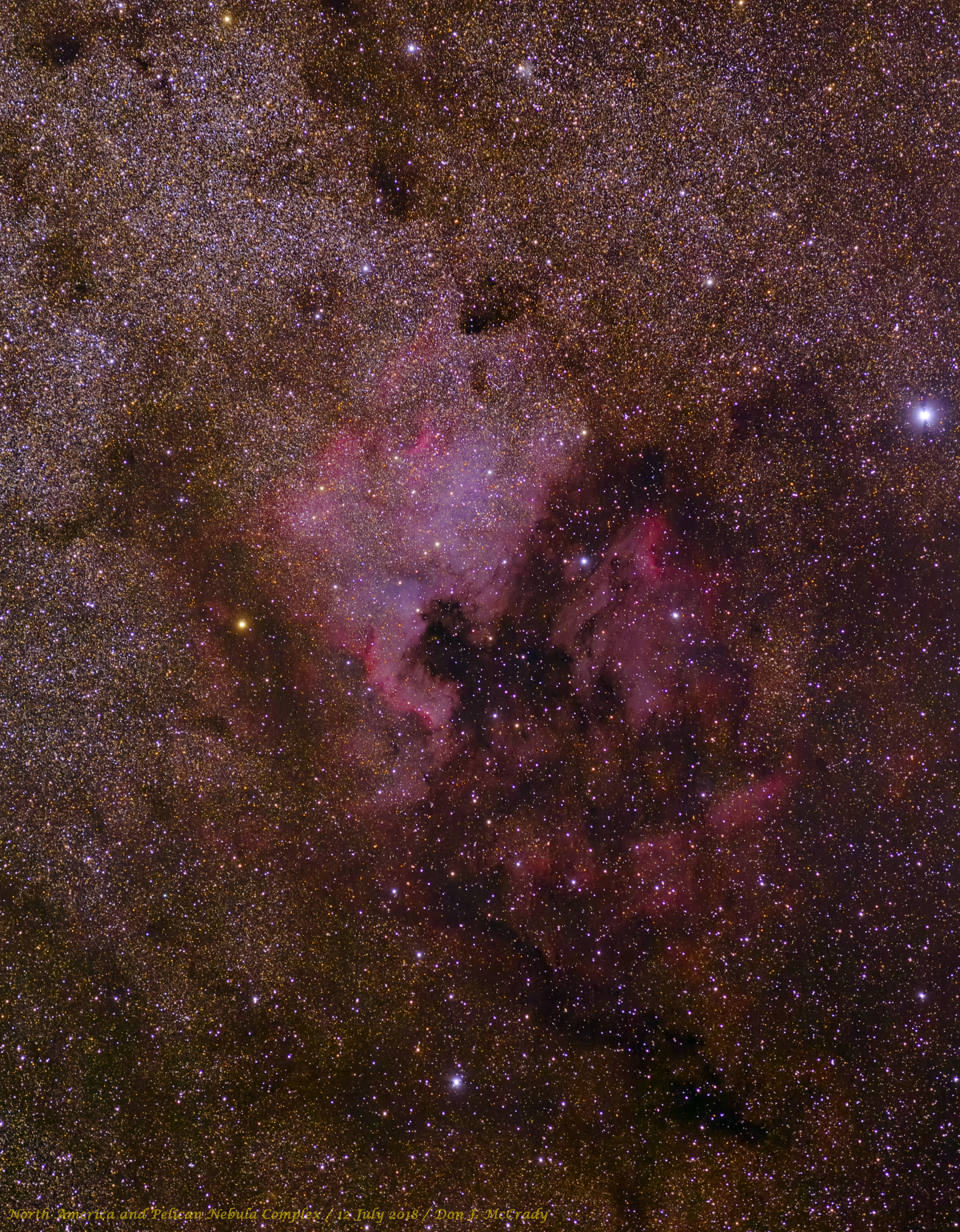