Today’s Jesus and Mo strip, called “errors”, comes pretty close to the kind of tautological arguments made by very orthodox Christians and Muslims.

For Christians—not so much Muslims—some of those scriptural errors, which are real (e.g., the absence of a Roman census around the time of Jesus’s birth, the absence of evidence for the exodus of Jews from Egypt, and, of course, the creation story of Genesis) are dismissed by claiming that these are metaphors, not factual errors. Others, most notably and recently William Lane Craig, have admitted that the Bible is erroneous because humans were involved in writing it, and simply appropriated stories from other sources. In contrast, the average Muslims tends to take his scripture much more literally, so Mo’s argument may be apposite there. 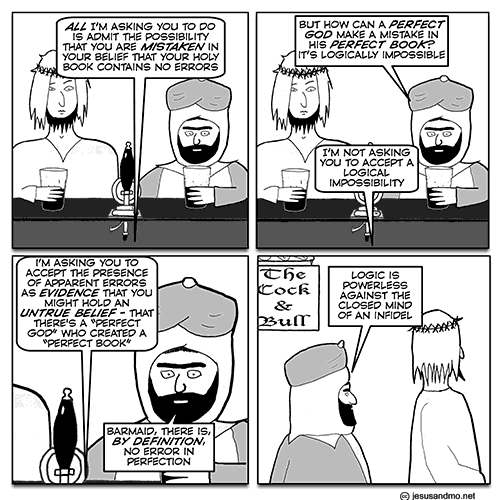 I’ll point out once again, and for the last time, that my reproduction of Jesus and Mo cartoons has caused this website to be banned in its entirety in Pakistan. Further, my host organization, WordPress, supposedly dedicated to free speech, has implemented that ban at the request of the Pakistani authorities. I’m not sure which is worse: the Pakistani government, which simply censors criticism of its national faith because that’s considered offensive, or WordPress, an American company that does the Pakistanis’ dirty work for them.