The ducklings are now almost the size of Honey, and since she’s now molting and has shed most of her primary feathers, it’s hard to tell her apart from her brood. The other development is that the “babies” are now testing out their wings, sitting on the duck island and flapping them furiously for long periods. They aren’t feathered enough to fly yet, but their primaries are growing in, and I think they’re exercising their wing muscles. This must be instinctive, for surely they don’t know they can fly. What a sensation it must be for a duck to take off for the first time! I can’t imagine—and we’ll never know—what that feels like to them. And how marvelous that at some point, they’ll just flap and take off!

Here are the wing feathers, by the way: 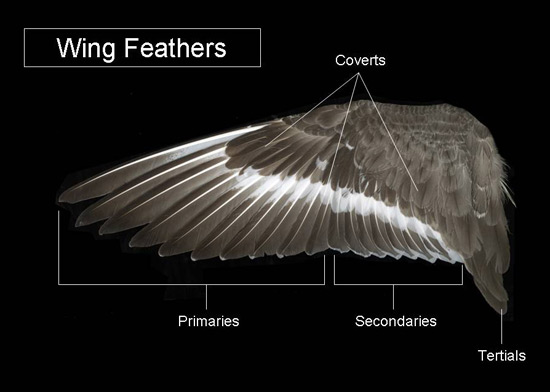 Here’s Honey, and you can see that her big primaries, which used to cross over each other by her tail, are gone:

Honey (right) with three of her brood. They’re about as big as she is now, and only her white-ish tail and beak mottling, as well as her position (standing guard, swimming either in front of or behind the ducklings) are obvious identifiers.

In contrast to Honey, her brood are growing in their primary feathers, which you can see in these photos of a duckling foraging in the lily pads:

Notice the big honking wing feathers starting to impinge on the tail:

The gang gathered for breakfast this morning. Can you spot Mom? Note the turtle at upper left along with a feather floating by it. The duck at the extreme right has its beak open.

Lord help me, I’m getting soft, collecting Honey’s shed feathers that are floating in the pond. The middle two are blue and must be part of her speculum:

A close-up of what I think is a speculum feather with a white tip and an iridescent blue half: