Good morning on Tuesday, July 3, 2018, National Chocolate Wafer Day. And, according to Wikipedia, it’s “the start of the Dog Days according to the Old Farmer’s Almanac but not according to established meaning in most European cultures.” Well when do Dog Days start in Europe?

The Fourth of July holiday in America starts tomorrow (with many leaving early today), celebrating our independence from Great Britain. Had that not happened, we’d have better soccer but we’d all be eating paper-thin sandwiches and curtseying to the King. In honor of tomorrow’s holiday, today’s Google Doodle (click on screenshot) highlights culinary specialities (and recipes) from all fifty states. The comestible for Illinois is below: 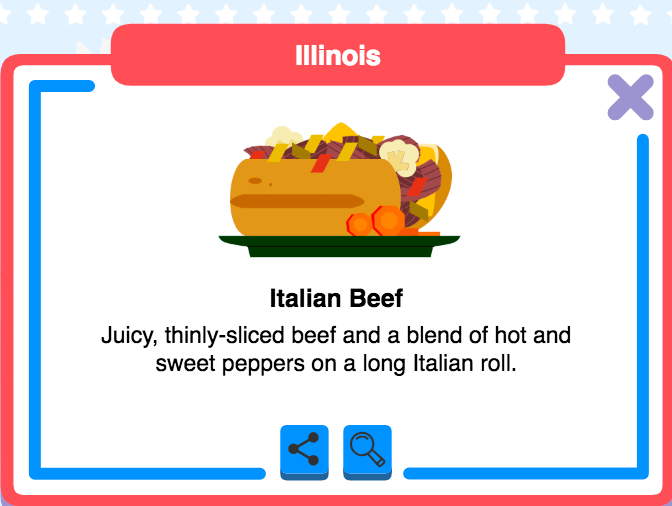 In honor of the holiday, here’s the shirt I’m wearing today:

On this day in 987,  Hugh Capet was crowned King of France, the first ruler of the Capetian Dynasty that would be in charge of France until the French Revolution 805 years later. On July 3, 1035, William the Conquerer became the Duke of Normandy, later becoming the first Norman King of England in 1066 and ruling for 21 years. On this date in 1775, George Washington took command of the Continental Army in Cambridge, Massachusetts, the army that beat the scarlet coats off the British.  On July 3, 1863, the famous Battle of Gettysburg ended with the fatal Pickett’s Charge. The Confederates then retreated after having reached their farthest incursion into the north. On this day in 1952, the passenger liner SS United States began her maiden voyage to Southampton. During that voyage the ship snatched the Blue Riband away from the RMS Queen Mary (the award for the fastest transatlantic crossing by such a liner), going from Ambrose Light in New York to Bishop Rock on the Isles of Scilly in 3 days, 10 hours, and 40 minutes. That record beat the Queen Mary by ten whole hours and still stands. And it was on the SS United States that a very young Professor Ceiling Cat and his staff traveled across the Atlantic on our way to my father’s duty station in Athens, Greece in the 1950s.

On July 3, 1962, Jackie Robinson became the first African America player to be inducted into the Baseball Hall of Fame. On this day in 1996, the stolen Stone of Scone was returned to Scotland. Finally, on July 3, 2013, the military overthrew Egyptian President Mohamed Morsi.

Bragging time: here’s a photo of me with future Nobel Laureate (to be awarded some day) Stoppard eight years ago at the Hay Literary Festival. We’d been on a panel together and then discussed evolution privately. He showed a weakness for teleology in evolution, which was surprising. But he was a lovely guy, and even autographed one of his books for a friend of mine who was ill and admired Stoppard greatly.  Having been added to the panel at the last moment, I borrowed geneticist Steve Jones’s jacket, which fit me poorly. But I was with STOPPARD! (The roses were a gift from the Festival.)

More commonality: we both had unruly hair: 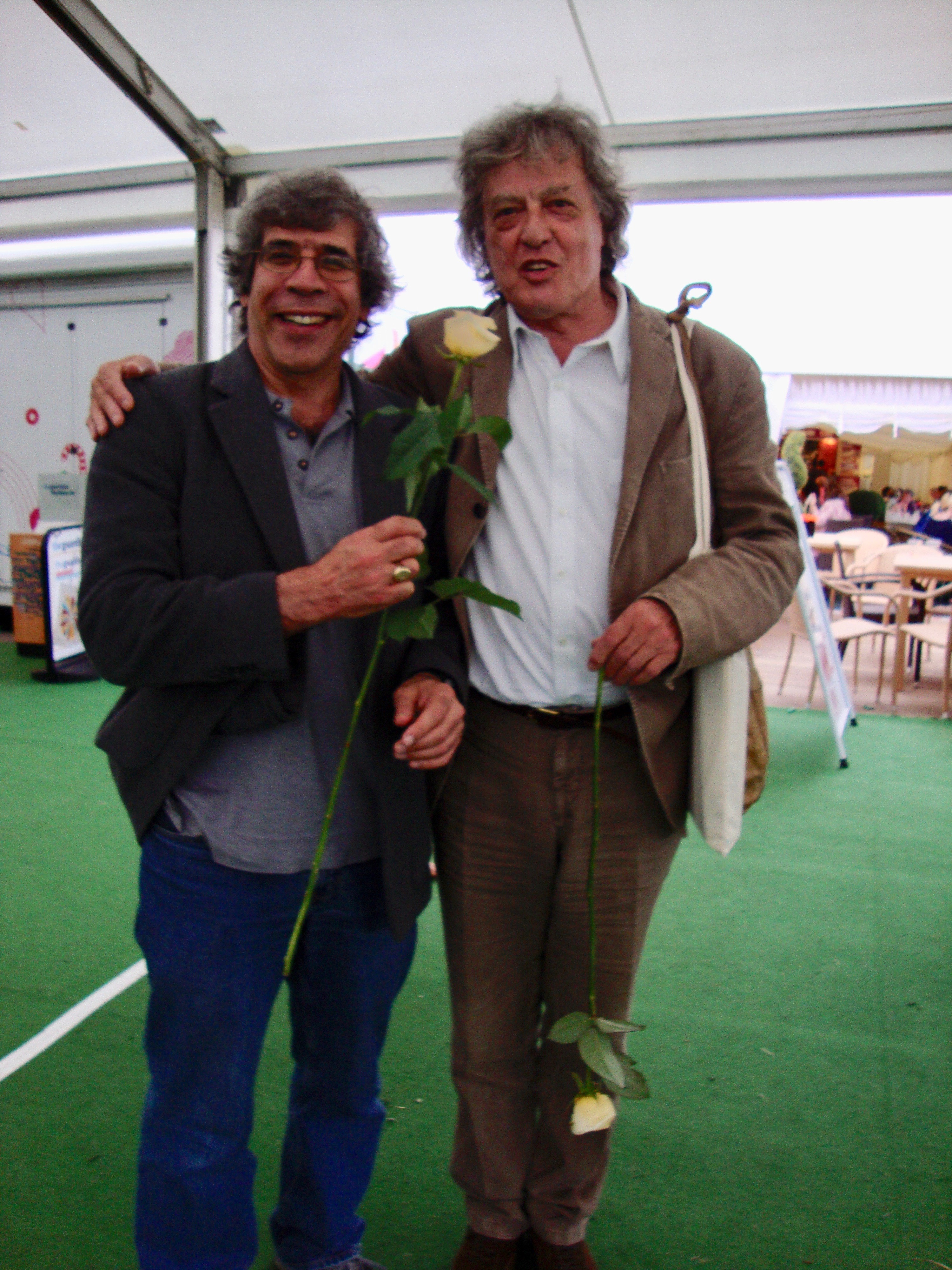 Meanwhile in Dobrzyn, Hili is up a tree:

A: And why did you climb up there?
Hili: Probably in order to climb down now. 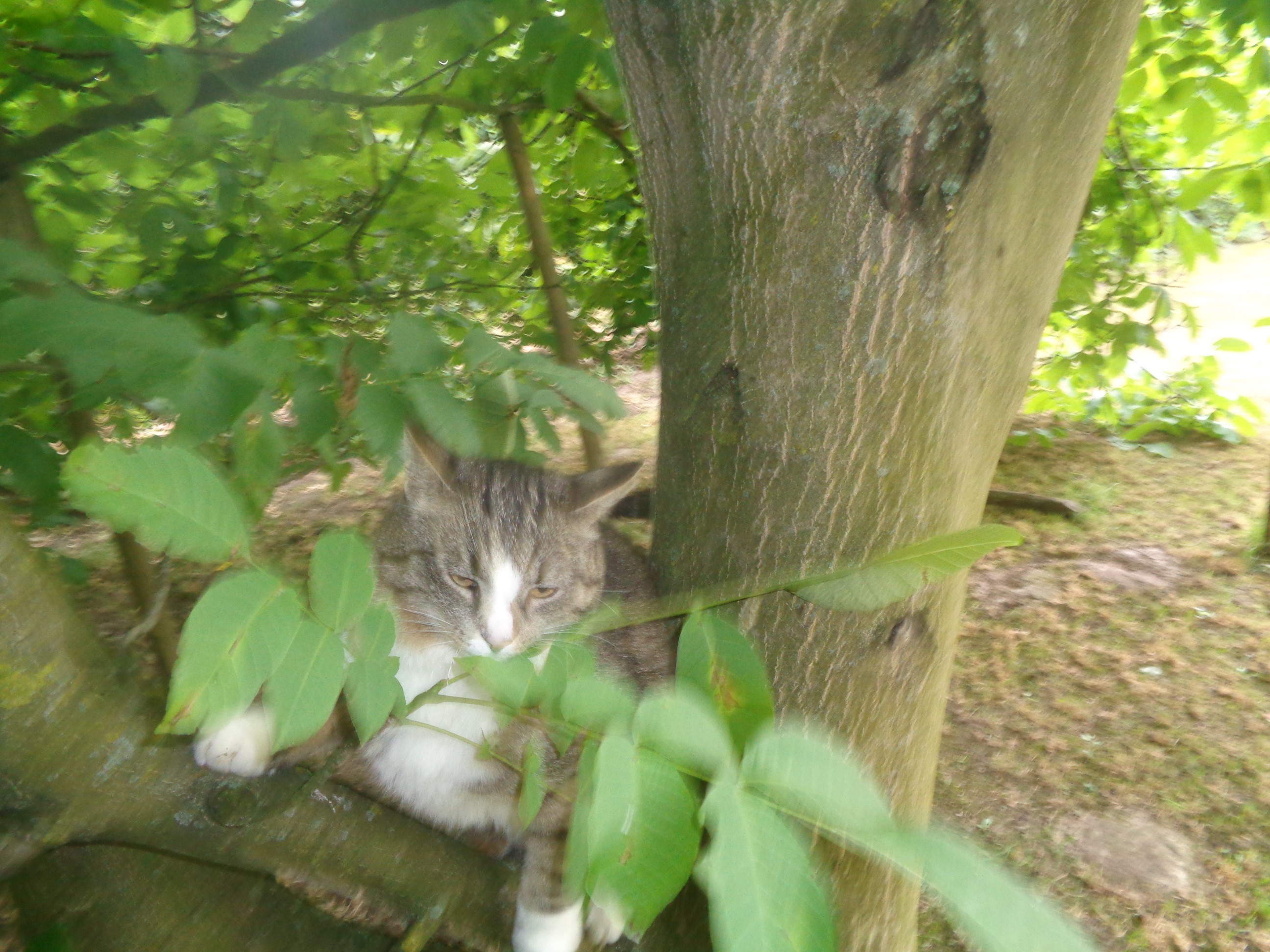 Some tweets from Grania. This one shows a brave tuxedo kitten:

Russian ballerinas watching their team at the World Cup:

Members of the Bolshoi following Russia vs Spain backstage, during a performance. From dancer Bruna Gaglianone. pic.twitter.com/e3OGbM214c

Grania also found a tweet showing the Chicago skyline, which is close to a farther view I get when the sunset is right:

Cat reciprocity: You scratch my back, and I’ll get pleasure.

Another contented moggie (listen to the meowy purr):

Yet more kittens playing (and fearing) an awesome cat toy:

From Matthew; turn the sound on to hear the repertoire of this awesome courting lyrebird:

Please enjoy this male superb lyrebird in Sherbrooke Forest standing on a log casually going through his entire repertoire of bird mimicry… pic.twitter.com/MD0VDgy71x

This was part of a tweet by Michael Siva-Jothy that said “Ever wonder how staphilinids fold and unfold their wings?” Watch the video and see:

Ah, the Russians and their cats! Translate the tweet below:

This got even better when I hit 'translate tweet' https://t.co/rEWQRS3UQb

“Translate tweet” is right above the cat photo to the left if you go to the site:

I’ve posted this before, but you can’t see it too often. The British Underground staff can be wags:

For Heather Hastie, who loves hedgehogs:

A happy mom with a nice long hoglet train. pic.twitter.com/Bpl1NeUt8E

Finally, a big Thank You! to reader Su, who had a special custom Professor Ceiling Cat lunch bag made for me by a woman in Riga, Latvia after I expressed a desire on this site for one that was unavailable. Much appreciated, Su. And the package came with her own artwork referring to Botany Pond: 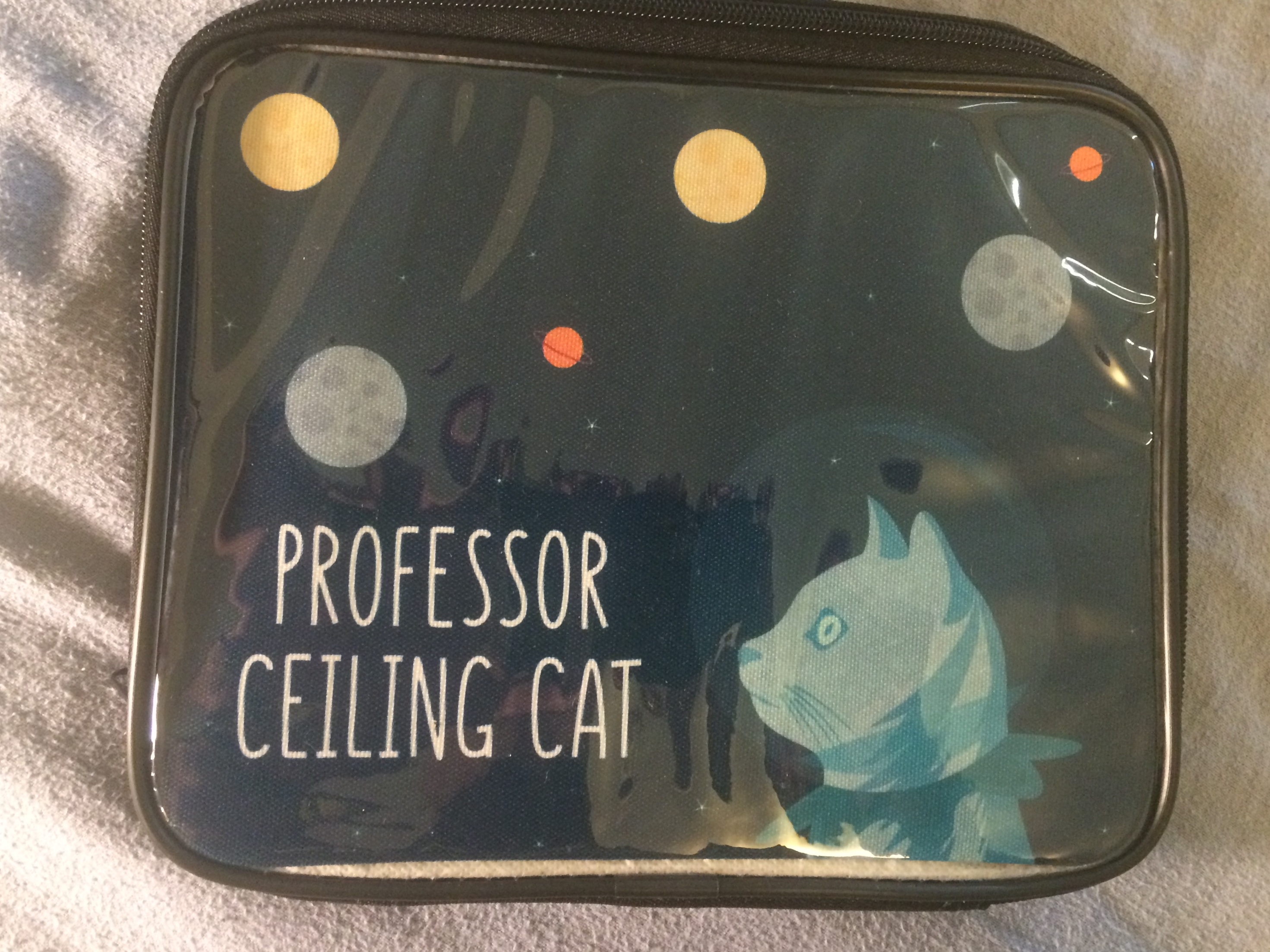 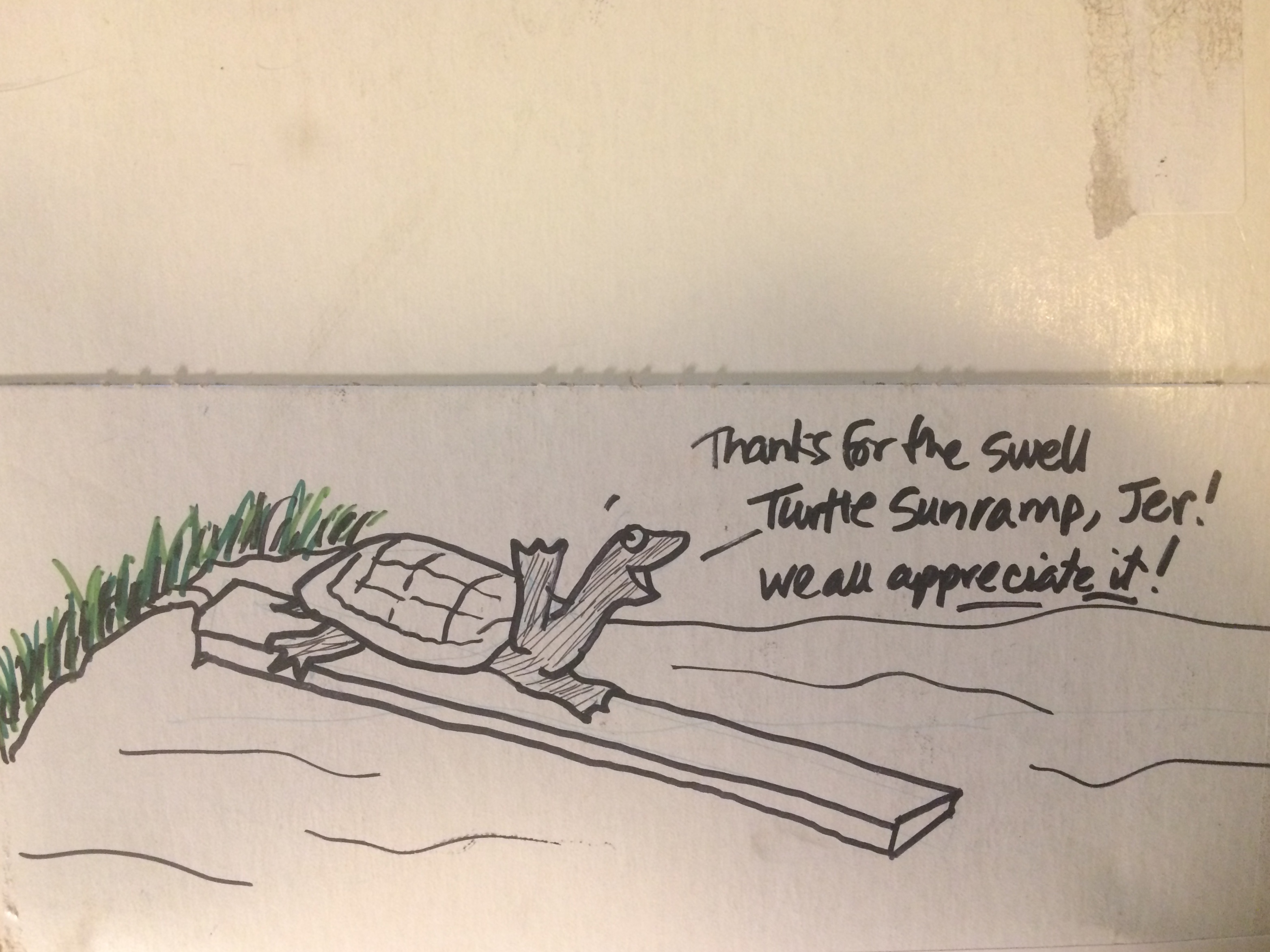