Matthew Cobb called this video to my attention, and I thought it was worth putting up.  Anhanguera is a genus of flying reptile that contains three described species. They were about 1.2 meters tall (four feet) with a 4.5-meter (15-foot) wingspan, and were heavy—weighing about 23 kg (50 pounds). They lived roughly 120 million years ago. Although Wikipedia describes them as fish-eaters, the New Dinosaurs site says this:

This is one flying reptile that you may not recognize from Anhanguera pictures. That’s because this pterosaur was discovered relatively recently – as compared to other flying reptiles – and doesn’t get the media attention that pterodactyls do. Which is quite a shame because this was one remarkable creature.

. . .  its wingspan was about 3 times larger than a Crowned Eagle and its weight was about 12 times heavier than a Red-tailed Hawk. It had crests not only on top of its beak but also on the bottom.

One of the most interesting facts about Anhanguera is that it had relatively weak legs. Which means that it probably spent the majority of its time flying. If it did spend any time whatsoever on the ground, then it most likely walked with a very unusual gait and probably was a little wobbly.

Most paleontologists believe that this pterosaur used its beak to scoop up fish, but it is also possible that it hunted for carrion from dead animals that it discovered on land as well. It may have also eaten a variety of different insects as well. Which means that it may have had one of the most diverse diets of any flying reptiles of its time.

We have much of the skeleton, and reconstructions vary in external appearance, because of course we don’t have feathers. Here are two: 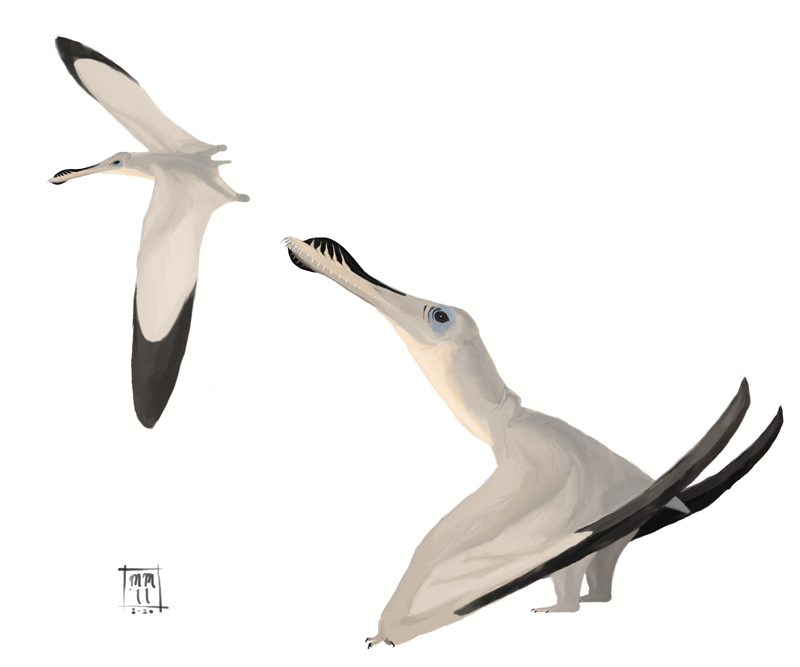 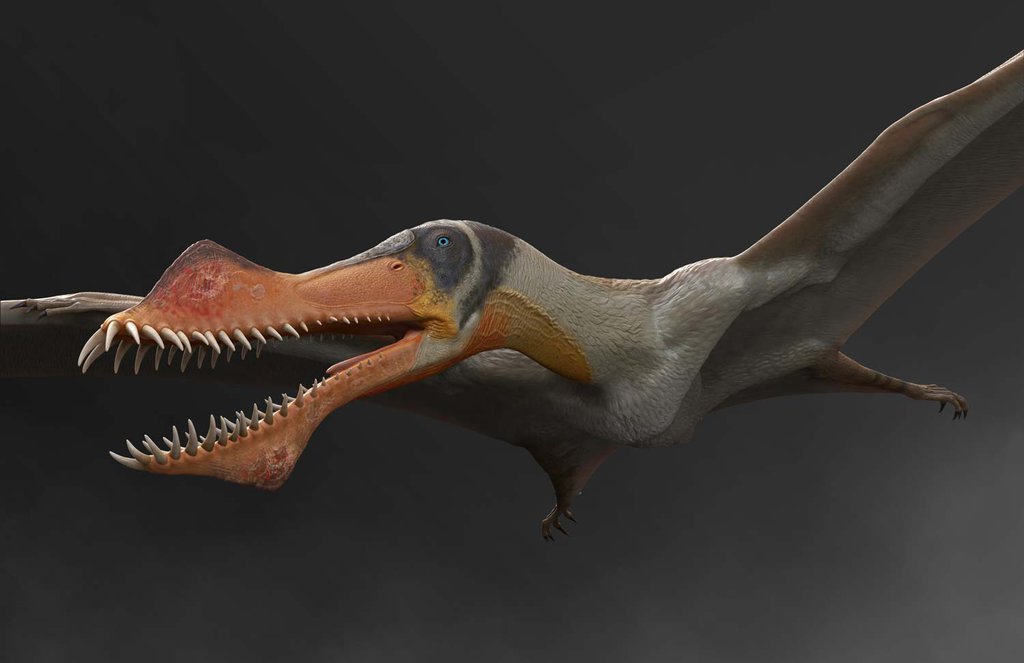 Here are some bones used in the reconstruction of a specimen’s skeleton (species not clear), and below that is the holotype (original specimen) skull from  A. blittersdorffi: 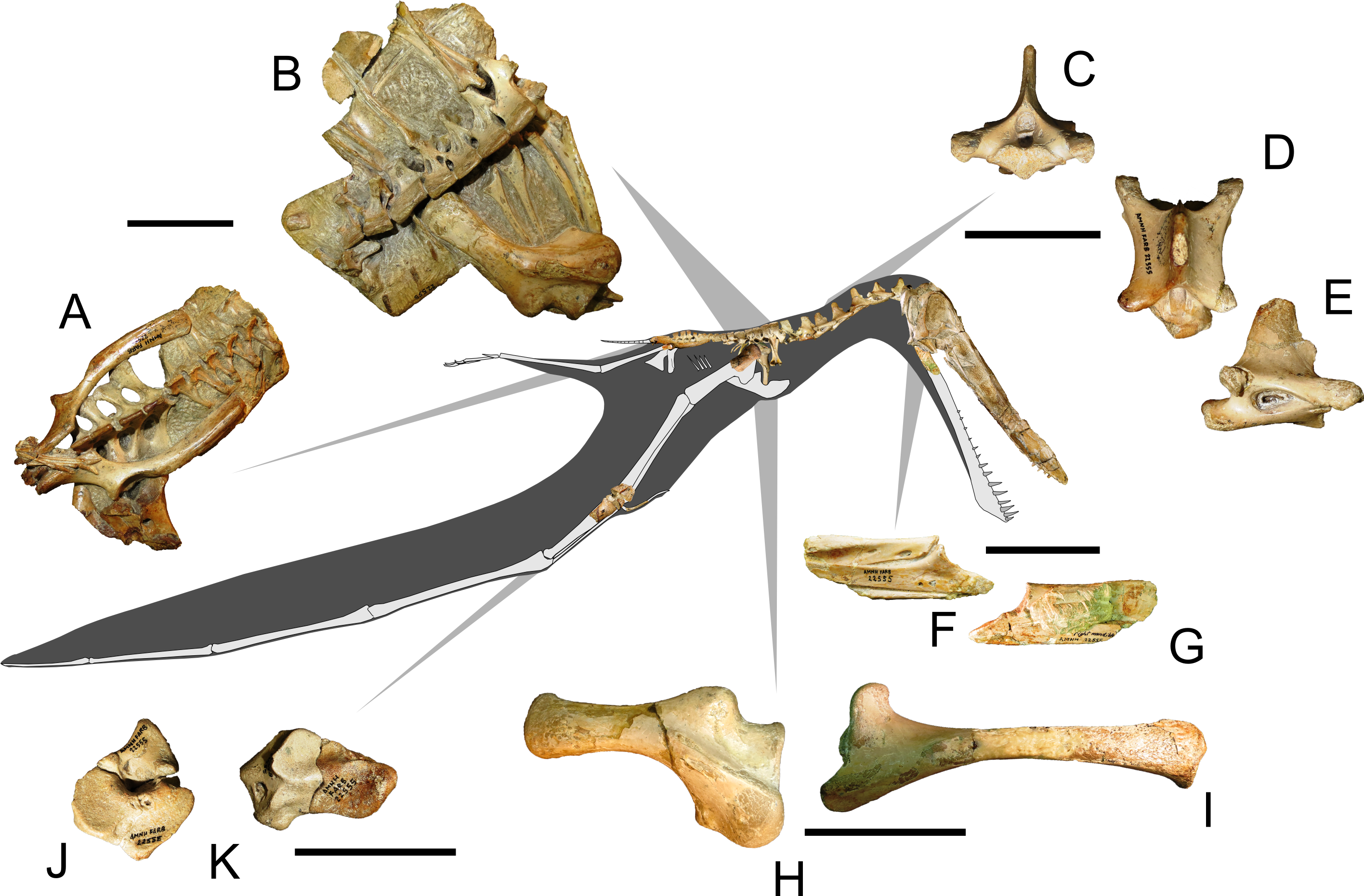 Skull: (lower jaw missing); note the crest near the tip of the beak:

The cool part is the video below, which was made by London’s Natural History Museum. It doesn’t name the narrator, but it sure sounds like David Attenborough to me. The single-leap takeoff is amazing:

This animal is Anhanguera, one of the flying reptiles that lived alongside the dinosaurs. Pterosaurs lived alongside dinosaurs, but they formed a group of their own. Pterosaurs were evolutionary cousins of dinosaurs, and shared many features of their skeletons with them. But unlike their land-dwelling cousins, they took to the air. For the first time ever, we can watch how it might have flown. This animation was made for Hold the World, a virtual reality experience set behind-the-scenes at the Museum.

Notice that what supports the wing membrane is a single digit: the elongated fourth digit, shown below. The other digits were present, as they are in the reconstruction above, but are tiny. They may have helped the creature clamber about on the ground, as shown above, or they may have been relatively useless vestiges of ancestral fingers.

47 thoughts on “How pterosaurs flew”