Book-chucking is now a trope.

Thanks to Hassan Radwan for the inspiration. You can follow him here: @abdulazizbulbul/

So far I haven’t been able to find the inspiration offered by Radwan, except for an article at the Clarion Project that describes his view, as an “agnostic Muslim”, that the Qur’an shouldn’t be taken literally (Ceiling Cat help him!). A quote:

But as long as we don’t tackle the belief that the Quran is the infallible words of God then no matter how many problems are solved or inequalities righted there will always be another group seeking to impose the word of God against reason and conscience.

This is why when you defeat one group another even more desperate rises from their ashes. The idea that the Quran is fallible will of course come as a terrible shock to most Muslims brought up as we are to believe the Quran is the perfect and infallible word of God, but I firmly believe that once we Muslims get passed [sic] this shock and emotional reaction and begin to reflect more rationally we will see that in fact this is the only way to save the real soul of Islam from the extremists who are in fact the ones destroying it.

In actual fact the Qur’an never uses words like infallible, perfect nor miraculous. The reason this belief seems to have gained ground is because of the challenge the Quran makes to “bring something like it.” Though being unable to imitate something doesn’t of course mean it is either perfect or infallible. The Quran does say it is from God, but then again what I’m saying doesn’t contradict that. I accept the Quran was inspired by God. It’s just not verbatim his actual speech.

Given that, then the inspiration for the strip becomes clearer: 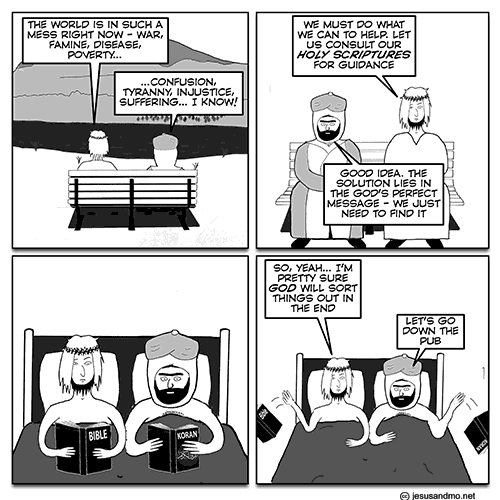