It’s Thursday, June 7, 2018, and the campus is getting ready for graduation (“convocation“) on Saturday. By Sunday the campus will be empty, and I’ll have more quality and uninterrupted Duck Time. It’s National Chocolate Ice Cream Day, and the birthday of Prince Joachim of Denmark.

As for Professor Ceiling Cat (Emeritus), he’s still a bit under the weather with this cold/allergy or whatever it is. Posting may be lighter till I recover. But the ducks must be fed (there are still eight), even though I myself am fasting today.

Today’s Google Doodle honors Dr. Virginia Apgar, born on this day in 1909 (died 1974). If you go to the Google site (click on the screenshot), you get an animation showing the five criteria described by C|Net below—criteria that apparently saved the lives of millions of infants:

While the infant mortality rate in the US had declined, the rate of infant deaths within the first 24 hours after birth remained constant. As an obstetric anesthesiologist, Apgar was able to identify physical characteristics that could distinguish healthy newborns from those in trouble.

Apgar’s observations led to the development in 1952 of the Apgar score, a quick and convenient method for immediately evaluating how well the newborn weathered the birthing process, especially the effects of obstetric anesthesia.

To honor Apgar’s contribution to neonatology — the medical care of newborn infants — Google dedicated its Doodle Thursday to the doctor on her 109th birthday.

Generally conducted one and five minutes after birth, the test assigns a score of zero to two for each of five criteria: appearance, pulse, grimace, activity and respiration (APGAR). Scores of seven and higher are generally normal, four to six fairly low, and three and lower are generally regarded as critically low. The test helps medical personnel determine whether a newborn needs immediate medical care.

The test spread through US hospitals in the 1960s, proving a useful measurement for quickly assessing a newborn’s physical condition. The technique is still used in hospitals throughout the US.

On June 7, 1099 the First Crusade reached its goal, beginning the Siege of Jerusalem, which ended successfully on July 15, with the slaughter of thousands of Muslims and Jews (they were fighting side by side). On this day in 1654, Louis XIV was crowned the King of France. On June 7, 1892, a setback for integration in the U.S.: Homer Plessy was arrested for refusing to leave the “whites only” section of a train, and the case went all the way to the Supreme Court, where Plessy lost the case of Plessy v. Ferguson, which upheld segregated facilities under the mandate “separate but equal.” Of course, they were never equal. It took seventy years to make the right decision.  On this day in 1899, the Temperance fanatic Carrie Nation started her movement of wrecking establishments that served alcohol; in this case she ruined the inventory in a saloon in Kiowa, Kansas.  In France in 1944, the invasion of the Allies continued, and, at Ardenne Abbey, members of a Hitlerjugend SS division, crazed with hatred, shot 23 Canadian prisoners of war.  On June 7, 1946, BBC One returned to the air after a 7-year hiatus due to World War II. I was surprised to read this, for wouldn’t that station have been important in keeping up regular routines and morale during the war? On this day in 1965, in the case of Griswold v. Connecticut, the U.S. Supreme court forbade states from criminalizing the use of contraception by married couples. Finally, on June 7, 1982, Priscilla Presley opened Graceland to the public, excepting the bathroom where Elvis Presley died in 1977. I’ve never been; have any readers?

Meanwhille in Dobrzyn, Hili wants IN.  Note the beautiful roses around the staff’s house.

Hili: There is nobody in this room.
A: So why are you looking around so carefully?
Hili: Because I might be mistaken. 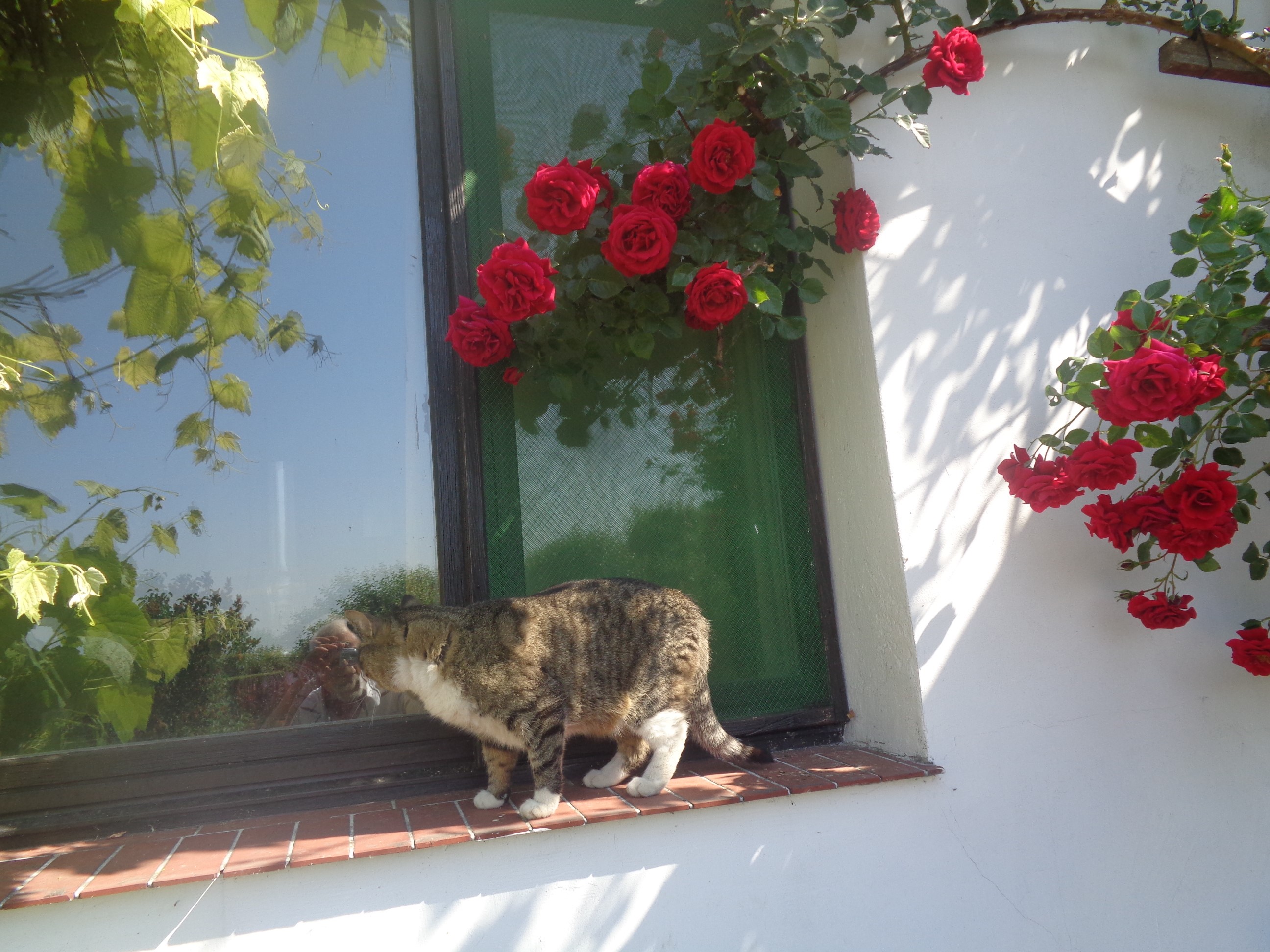 Matthew’s cat Pepper is upset as he cannot have breakfast. He’s probably ok; he’s getting blood tests since he lost a slight amount of weight since last year.

Poor Pepper the cat is bemused because he’s not allowed bfast as he has a blood test this morning. Sorry, mate. pic.twitter.com/fWD9blDtE9

From Grania, a surprise boat inspection. Don’t miss this video! (And can you identify the penguin?)

A tweet from Maajid Nawaz showing the dire actions of the British Labour Party, which is riven with anti-Semitism (click to enlarge the article):

A cat among ducklings; what a blessed moggie!

From Matthew, a beautiful blue bee collected by Henry Bates, who gave his name to the term “Batesian mimicry“:

Matthew and I both agree that cheese on apple pie is WRONG. Vanilla ice cream is far, far better.

Is cheese on apple pie just right or just wrong? The 'dessert' is dividing the Midwest https://t.co/pabFLQsn64 pic.twitter.com/ehkqu5ZCqo

The marvels of sexual selection. Look at those males fight to spread their genes!

Fabulous footage of stag beetles mating & fighting, recorded by Stuart Hughes @stuartdhughes in London W7. The males fight for the female, using their ‘antlers’ to wrestle each other for supremacy. https://t.co/p8grEmvrEQ #30DaysWild #SpringWatch @StagBeetleSam pic.twitter.com/Ynb8jJmJ5z