Reader Paul sent me this article from Canada’s National Post (click on screenshot to read it), noting that it was “not from The Onion, but real Canadian news.” It has to be real because even The Onion couldn’t make up stuff like this: 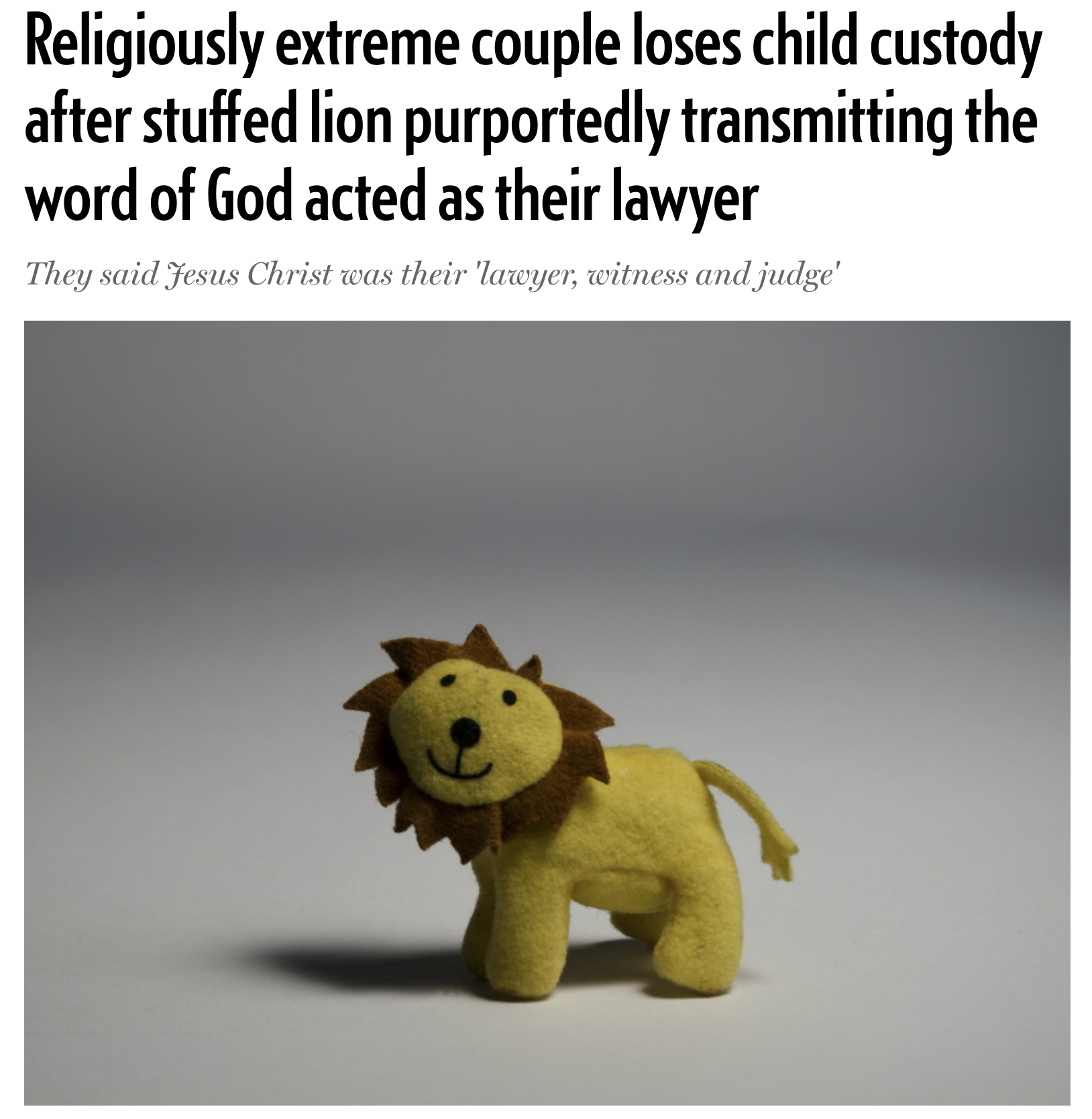 A B.C. couple whose religious views are too extreme even for churches and pastors and put them at odds with family, doctors, social workers and anyone else trying to help them with their daughter, have lost their battle for custody of her.

The unusual child custody trial featured the couple speaking in tongues to a stuffed animal they said transmitted the word of God directly to them and refusing legal assistance because Jesus Christ — through the stuffed lion — was their lawyer, witness and judge.

Aslan! Here’s what else they did:

After the woman found she was pregnant, she told a social worker her husband sometimes choked her to make her stop crying, had once tied her hands and covered her mouth with tape, which scared her, and occasionally beat her, court heard.

She told the worker her husband grew up in a cult and believes sexual relations between children should be encouraged and that they “role-play” sins where she plays the victim and he plays the perpetrator, court heard.

After the birth of their daughter, the parents refused all medical tests and procedures for her, including a hearing test, blood test, eye drops and a vitamin K shot. The mother also said she was unwilling to have her vaccinated.

Because of concerns over family violence and mental health, the ministry monitored the family. The couple refused to have parental capacity assessments, despite a court order.

A month after the girl’s birth, she was removed from the home and the parents continued to have supervised access.

The mother applied to change her daughter’s name to Jesus JoyoftheLord and her own first name to Risen Lord Jesus, her middle name to Refinersfire and her last name to Christ (with a hyphenation including her real name.)

When their child custody case came to court, the couple refused legal aid.

They said they had legal help, however, which came in the formed of a stuffed lion. During trial, the couple spoke to the lion in non-discernible words, presented as “speaking in tongues,” and said that through the lion they heard directly from God.

They said Jesus Christ was their “lawyer, witness and judge.”

When they cross-examined witnesses, they told each witness that their lawyer Jesus was asking the questions through them.

The couple was apparently unstable, moving around, unable to hold jobs, and even disrupting the Christian churches they attended with their extreme behavior.

If they had been less demonstrative, of course, the kid would still be with them. And that’s the real tragedy of such situations: you can fill your kid’s head with all kinds of lies, fantasies, and false nonsense, but as long as you don’t make a public scene, that’s fine. There should be a law forbidding that brainwashing. As for withholding medical care and vaccinations, I suppose that that’s legal in some parts of Canada, as it is in many states in the U.S. And THAT should be illegal. The suffering and killing of children by withholding medical care in favor of “spiritual treatment” is one of the most horrible aspects of evangelical Christianity.

The judge found the parents unfit and ruled that the child should remain in foster care. Eventually, this could lead to its being adopted. It should be; people like the ones above (why aren’t their names given?) are unfit to be parents. Without religion, of course, the chances of this happening are severely reduced, though not completely eliminated.

44 thoughts on “Chuckle of the day, but also sad”