Reader Mark Sturtevant has returned with a series of insect pictures that he sent on March 28. His notes are indented, and be sure to note the instances of mimicry and the weird mantidfly in the last two photos.

Here are some insect photos for WEIT. The first picture is a nice wood nymph butterfly (Cercyonis pegala). Various species are common in the local woods, but they are usually hard to approach. However, on this day it was overcast and somewhat chilly after a heavy rain, so this one was content to let me come in for pictures. 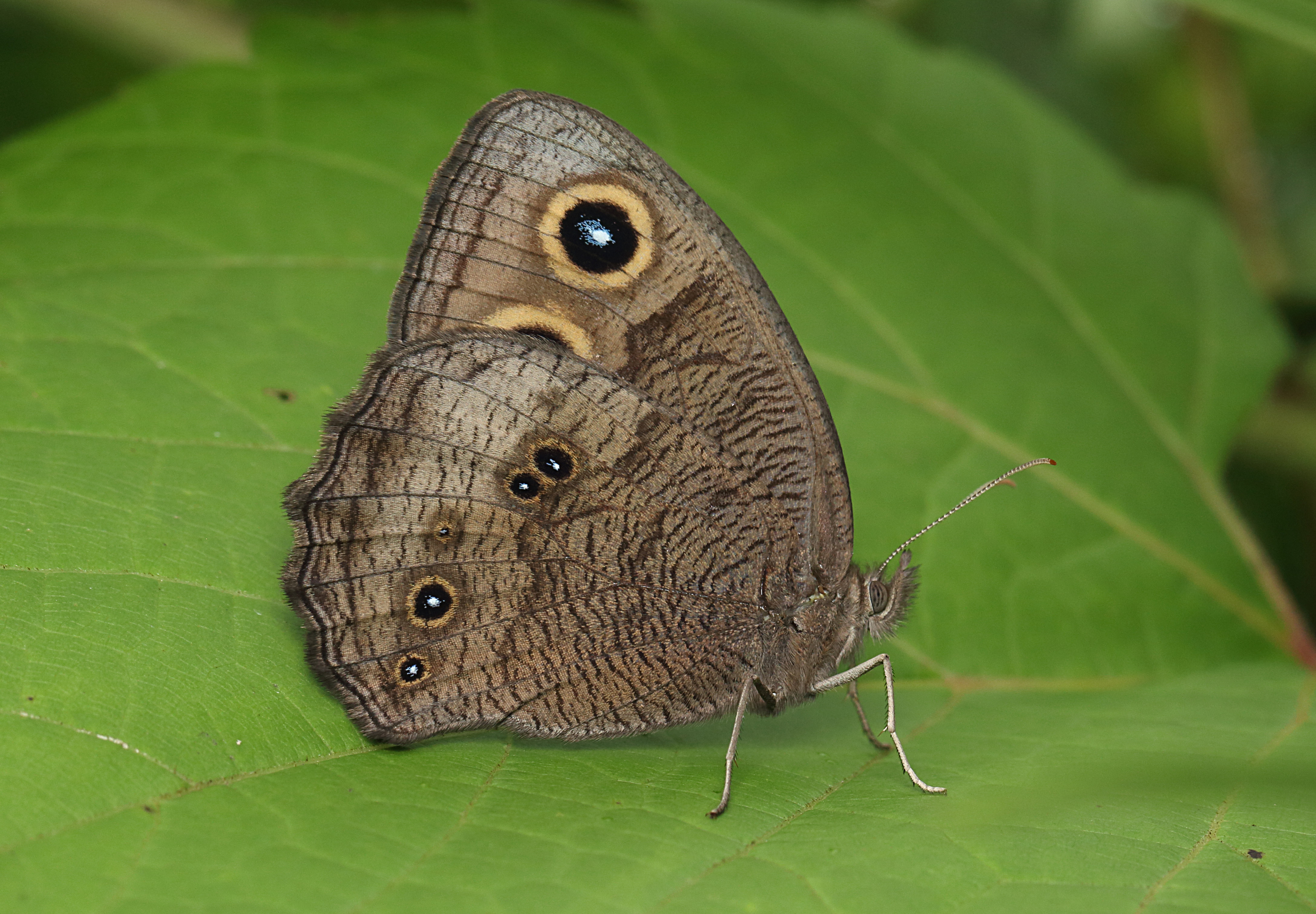 Next is a large mayfly that I had found on my car, so I transferred it to a nearby tree for pictures. It is one of the burrowing mayflies (Hexagenia), and is probably the most common species, H. limbata. As aquatic larvae, burrowing mayflies will get down out of sight into the silt and mud. 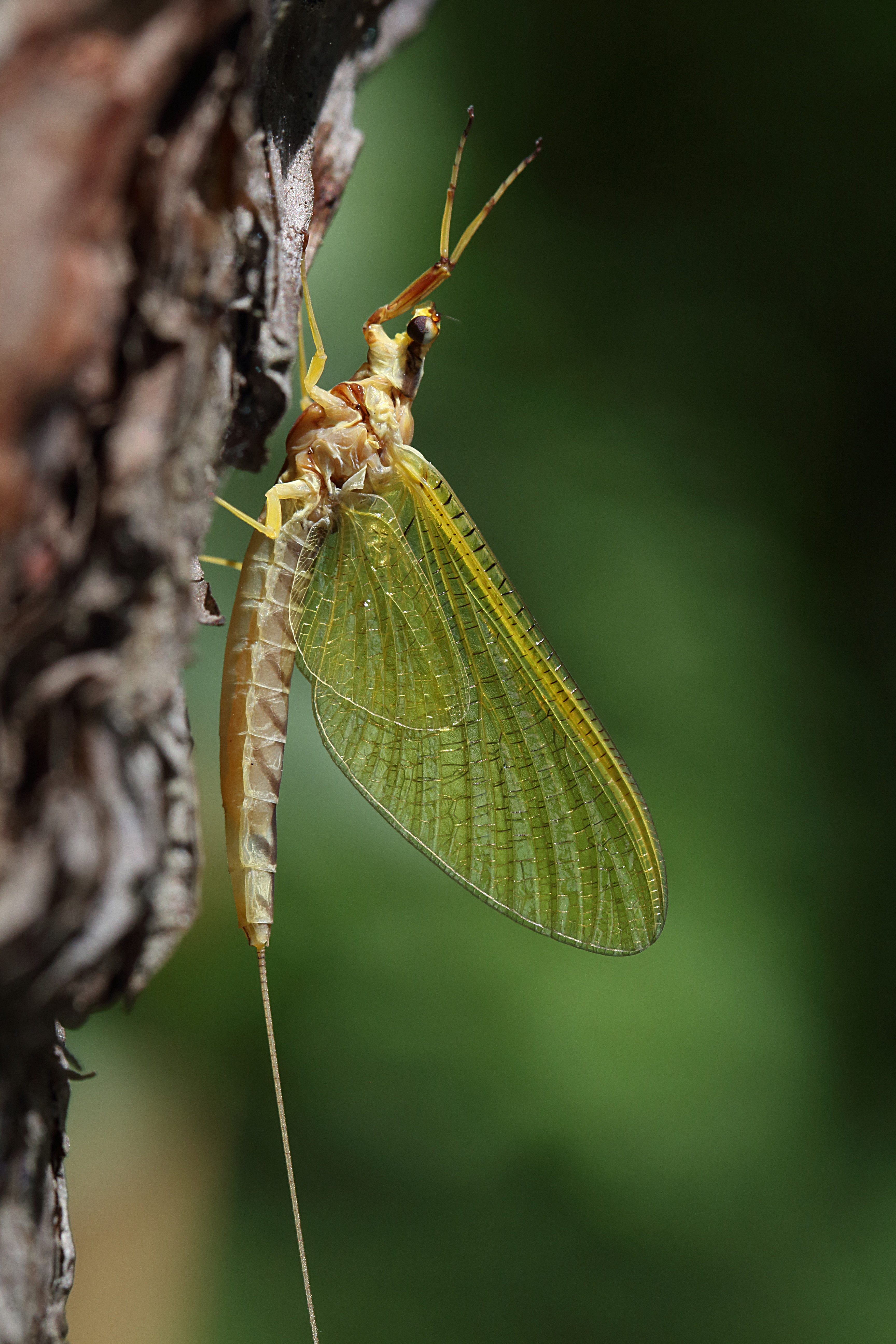 Everyone here should be fond of mimicry. One of my personal goals has been to find nymphs of a broad-headed bug since the nymphs are excellent ant mimics. Each species has a strong resemblance to a particular species of large ant, right down to very small details. So I was very happy to one day come across one such insect in a community garden, as shown in the next picture. This species looks to be in the genus Alydus, and I suspect it is mimicking the Eastern black carpenter ant—by far the most common large ant around here [Michigan]. Mimicking an ant is presumably done to avoid predation since ants taste very bad and not many things will eat them. Broad headed bugs are seed feeders, and they especially like to feed on seeds of legumes. So if I could find the preferred host of these critters I should be able to find more! This one was running fast through a strawberry patch (a feature of ant mimics is that they behave like ants), and so this heavily cropped picture is the only decent one that I have. The nymphs are good mimics, but the adults are rather ordinary looking as shown in this picture at another site. 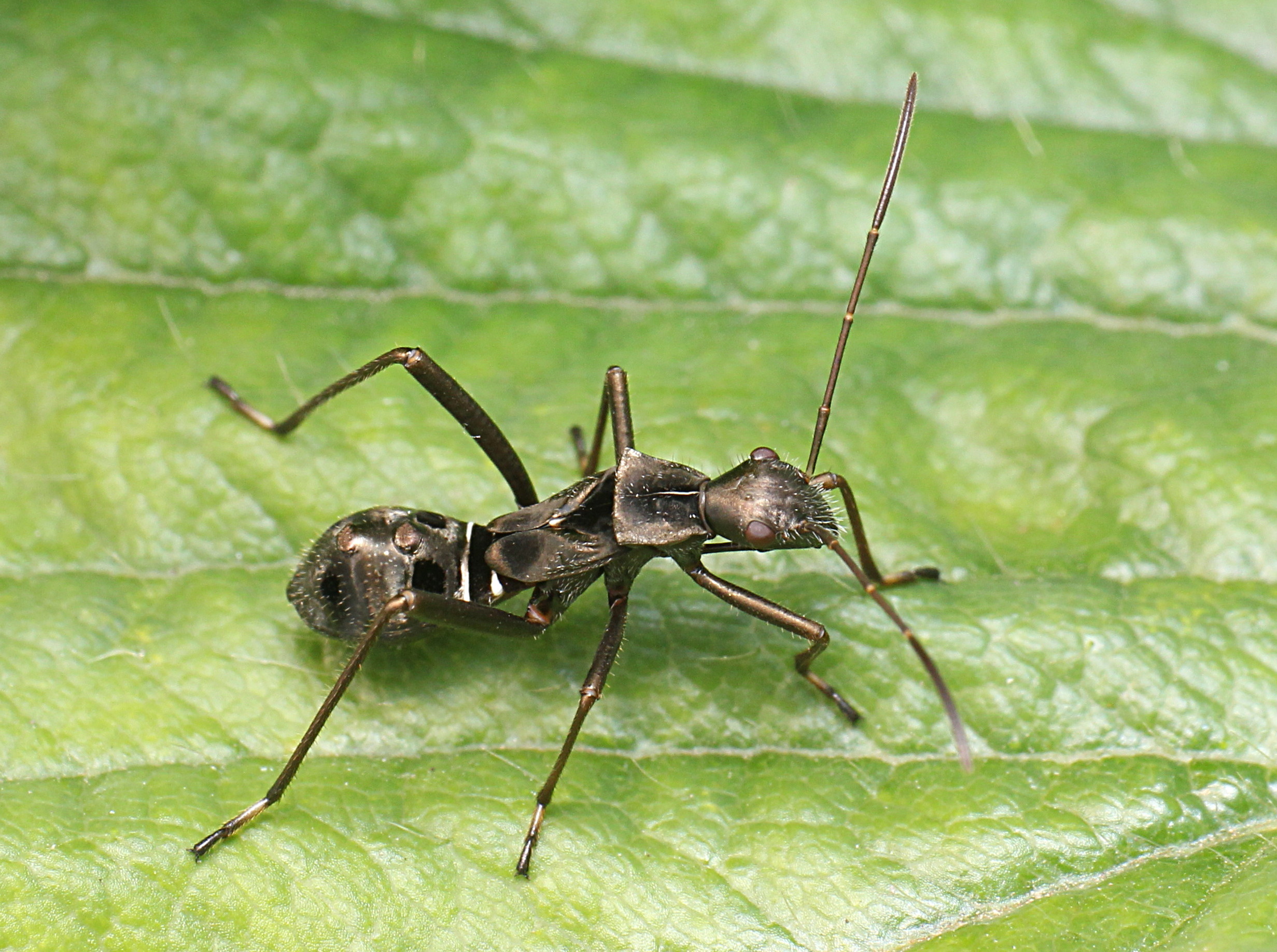 A local nature center that strongly caters to school field trips recently built a native butterfly house, and I definitely wanted to visit that! The next two pictures shows one of the residents, which is the American lady butterfly (Vanessa virginiensis). This species is often mistaken for the more common painted lady (I had made that mistake as well!) So here is a handy key to tell the difference. 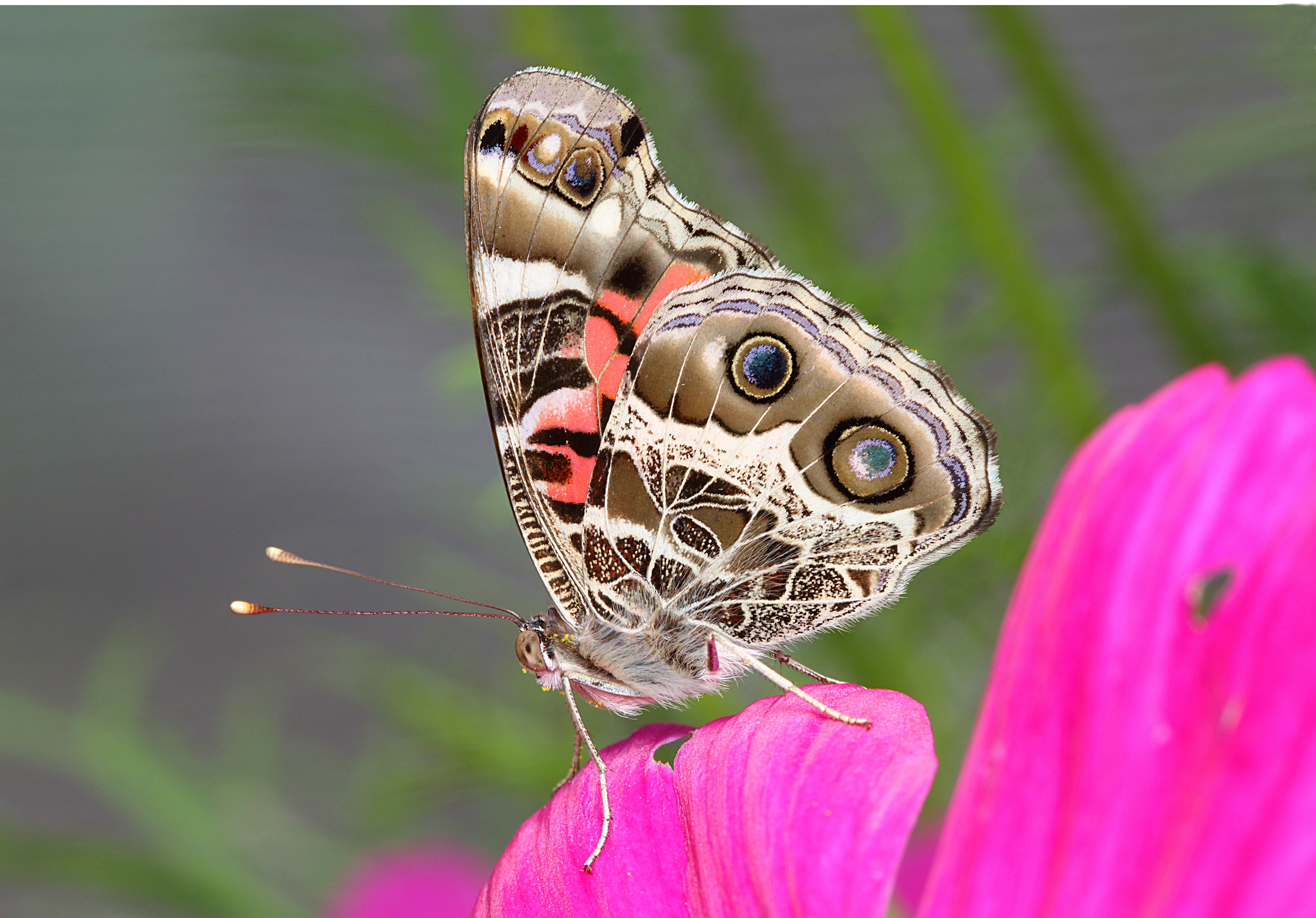 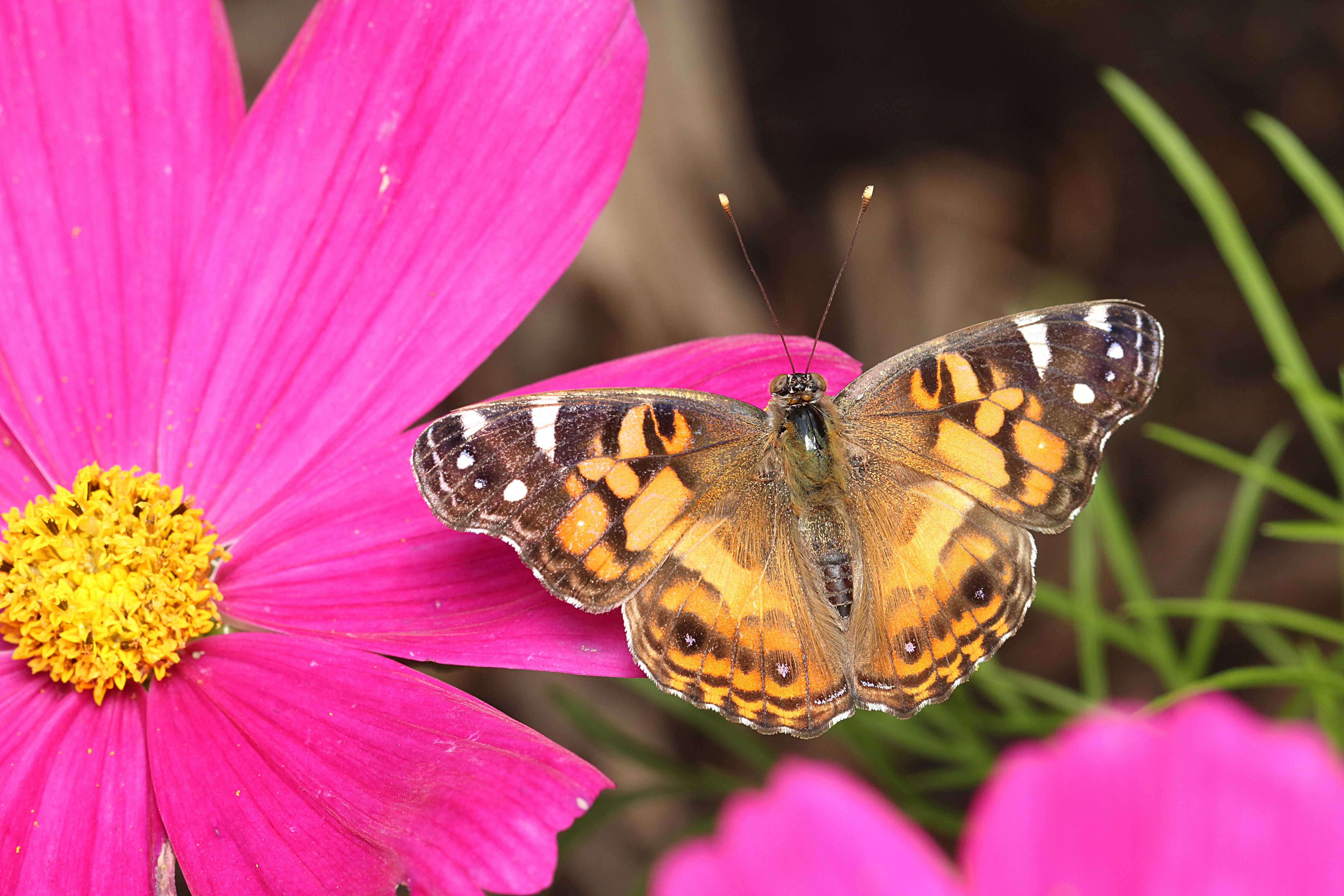 What do you suppose is the weird insect shown in the next picture? It took me a moment to figure out the order, and later on the family. This is a kind of wasp-mimicking longhorn beetle with very short front wings. The species is probably Necydalis mellita. I could only take two pictures before this nervous and alert insect took off. 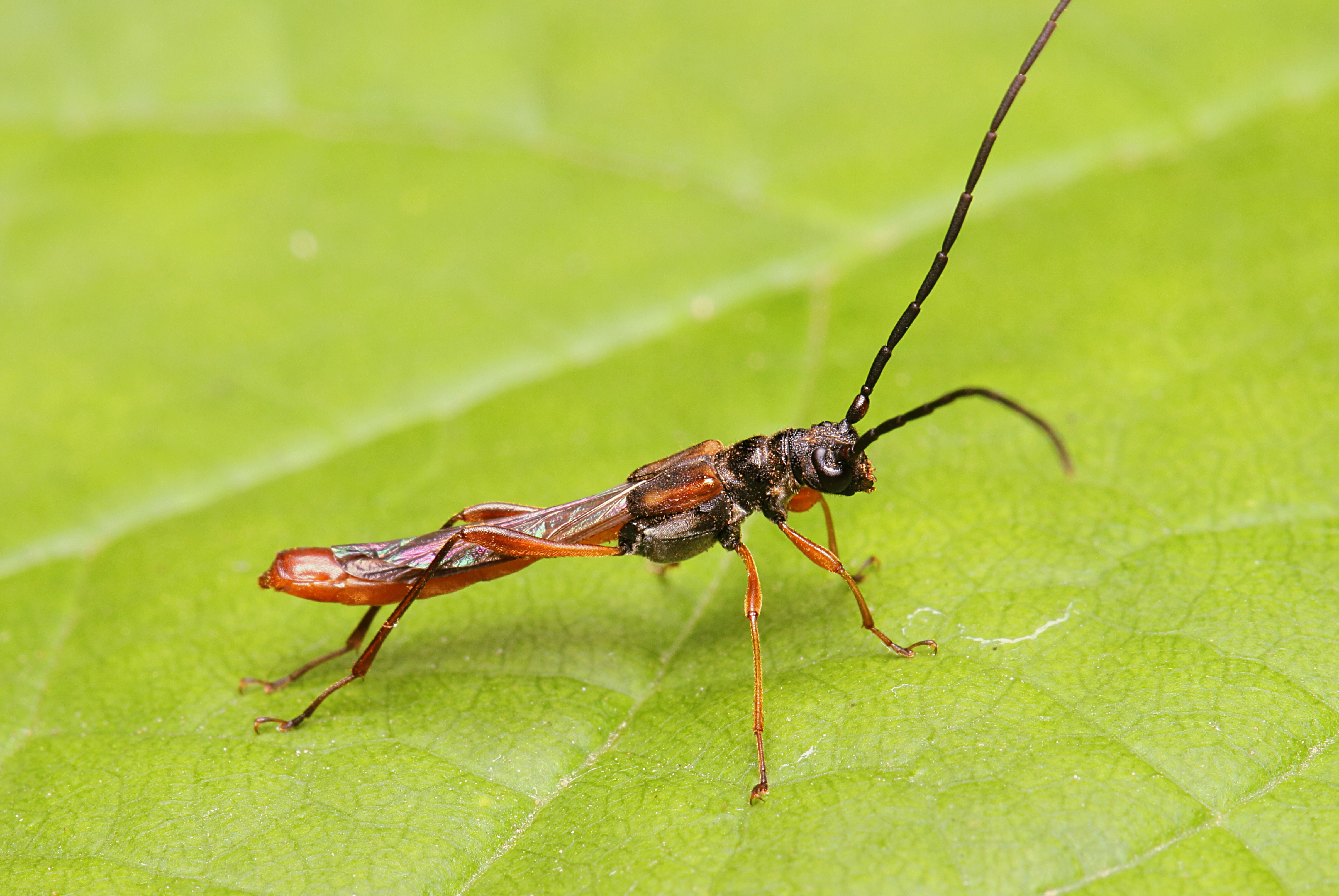 I have a friend and colleague (we teach in the same department) who also very much enjoys doing insect macrophotography, and we often go out together to local parks. One thing that happens is that we compete a bit over who has the best ‘find’ for the day. My friend (Gary) wins this competition more often than not, but one day I saw a strange V-shaped thing sitting on a leaf. Could it be? Yes, it was a mantidfly!!! This one was a female, and we soon figured that there was little chance she would fly off since she was quite heavy with eggs. Mantidflies and praying mantises clearly show convergent evolution, but they are from completely different insect orders. Mantidflies are members of the order Neuroptera, and their familiar relatives include lacewings and antlions. The front limbs are usually held in the odd position seen here, cocked back farther than would be seen in a mantis, and they are not used for walking since they lack foot pads.  This species (Climaciella brunnea) uses bright warning colors and a wasp-like shape to mimic a paper wasp. But the mimicry is a complete ruse since this predatory insect of course does not sting. We both agreed that this was “it” this time  —  the best find of the day. 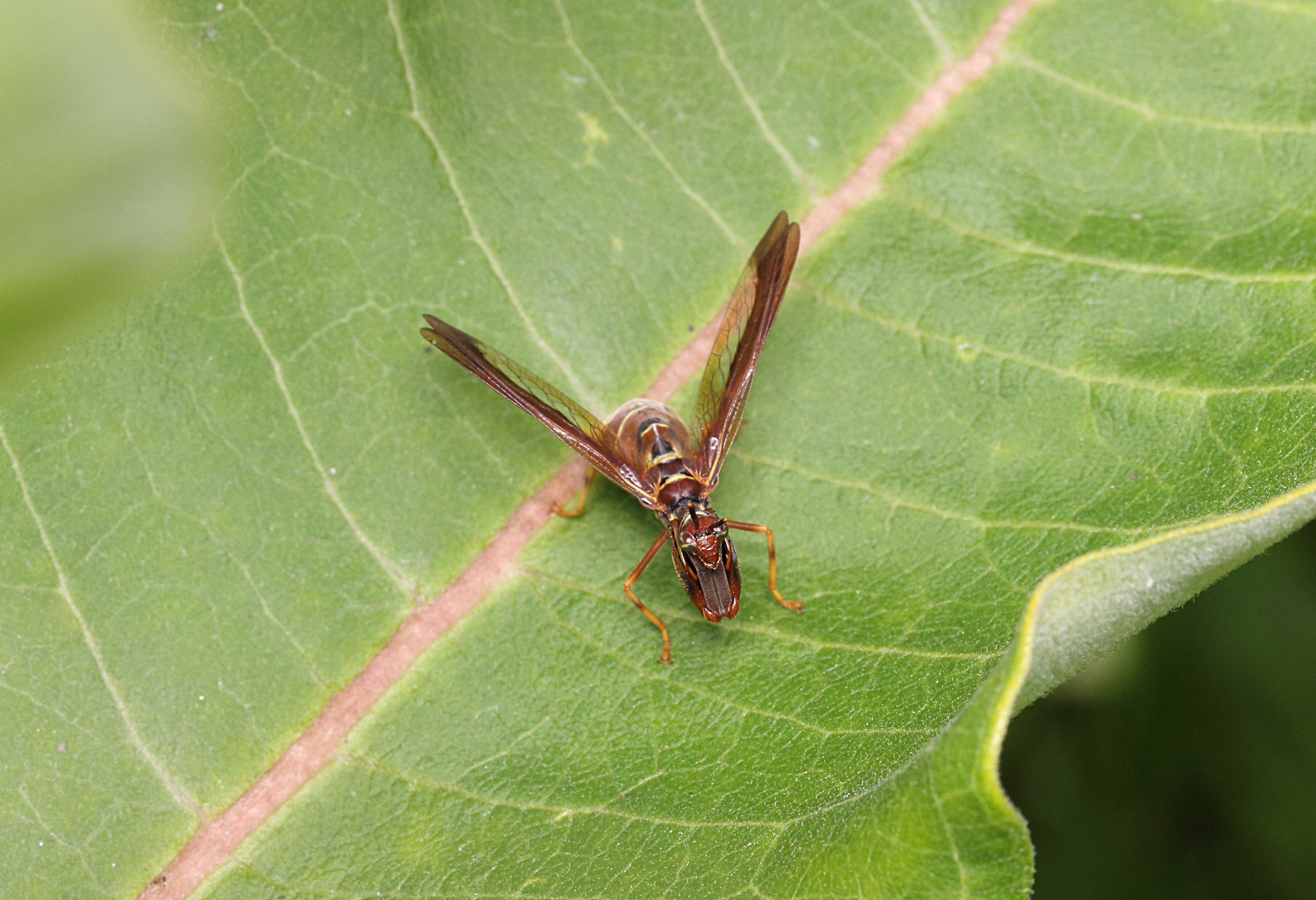 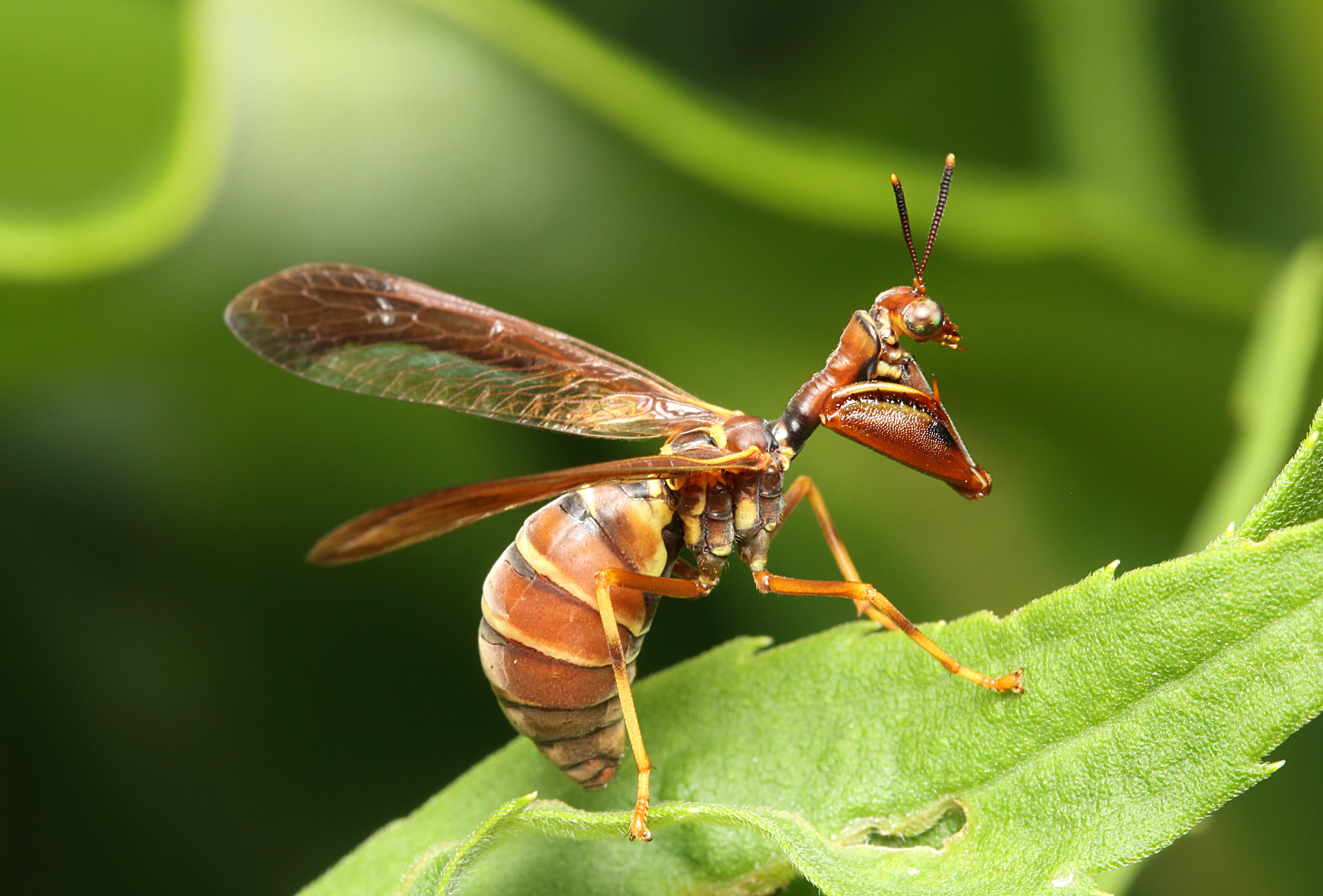