Now the U.S. media is going bonkers about today’s royal wedding: of an American woman to a man who, realistically, has no chance to ever be King. While I can understand the love of ceremony, I don’t understand the almost worshipful attitude of the media towards two “royals.”  And now I’ve turned on the television to watch the news, and the major networks are all doing live coverage of the wedding. “MEGHAN MARKLE LEAVES HOTEL IN 30 MINUTES”, goes the headline. Where is the news I want to hear but haven’t yet: about the school shooting? Instead, we hear that pantyhose and closed-toed shoes are required for women attending the wedding.  Have you been to a regular person’s wedding with that kind of dictate?

In the U.S., we don’t see this kind of pomp when, say, a President’s son marries a woman. We do not bend our knees or curtsey to heads of state. That’s the proper state of affairs in a democracy. There’s no moral justification to bowing and scraping to people who, after all, aren’t known for their achievements or intelligence, or treating them as if they’re a special breed of people.

I’ve always said that there is no justification for existence of the British royalty, and this just reinforces that feeling. Isn’t one network covering this expensive spectacle enough? And who cares about what kind of tiara Meghan Markle is wearing (the latest headline on the screen)? Isn’t it sad that women have to give up all their aspirations at the moment of such weddings and become Royal Puppets and Breeding Stock?

Last night the local news interviewed a student at Northwestern University in Chicago, where Markle went to school, and the student was literally squealing with glee that she went to the same school as a future Princess!\

My CNN “news alert” (click on the screenshot if you must): 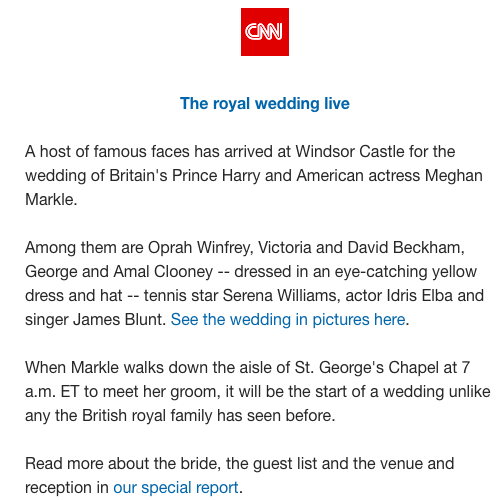 Every wedding is “unlike any the British royal family has seen before”. What do they mean by that: that there’s an American involved?

And OMG, Oprah is there. As PuffHo says, “she’s American Royalty”:

I think I need coffee.

198 thoughts on “The Royal Wedding”