I have arrived in Paris, the weather is gorgeous, and I look forward to reacquainting myself with what I consider the world’s most beautiful city. If I had a gazillion dollars, I’d buy myself a pied-à-terre in the Sixth Arrondissement, near where I lived for six months in 1989-1990, but overlooking the Seine and the Louvre.

But we have more important issues to consider: when typing, do we use one space or two between sentences?

I use two, as that’s the way I was taught in 10th-grade typing class (an alternative to “shop”—woodshop—and a choice I’ve never regretted). But there’s a bitter argument about this issue, and no strong consensus. I will use one space between sentences in this first paragraph.

Now two spaces in this one.  The Washington Post has an article about this kerfuffle (click on screenshot).  Its answer, which purports to be “scientific” is “TWO SPACES AFTER A SENTENCE!”

(One space). Science? How could it do that? Well, the Post reports on an article that tested reading ease with different spaces. Here’s the result:

The researchers then clamped each student’s head into place, and used an Eyelink 1000 to record where they looked as they silently read 20 paragraphs. The paragraphs were written in various styles: one-spaced, two-spaced,  and strange combinations like two spaces after commas,  but only one after periods.  And vice versa, too.

And the verdict was: two spaces after the period is better.  It makes reading slightly easier.  Congratulations, Yale University professor Nicholas A. Christakis.  Sorry, Lifehacker.

Hurray! Science vindicates my longstanding practice, learned at age 12, of using TWO SPACES after periods in text. NOT ONE SPACE. Text is easier to read that way. Of course, on twitter, I use one space, given 280 characters. https://t.co/4xI6sVbF88 Will arm-wrestle @Neuro_Skeptic pic.twitter.com/XpEr4KFR4x

But it’s not that clear-cut!:

Most notably, the test subjects read paragraphs in Courier New, a fixed-width font similar to the old typewriters, and rarely used on modern computers.

Johnson, one of the authors, told Douglas that the fixed-width font was standard for eye-tracking tests, and the benefits of two-spacing should carry over to any modern font.

Douglas found more solace in the fact that the benefits of two-spacing, as described in the study, appear to be very minor.

Reading speed only improved marginally, the paper found, and only for the 21 “two-spacers,” who naturally typed with two spaces between sentences.  The majority of one-spacers, on the other hand, read at pretty much the same speed either way.  And reading comprehension was unaffected for everyone, regardless of how many spaces followed a period.

The major reason to use two spaces, the researchers wrote, was to make the reading process smoother, not faster.  Everyone tended to spend fewer milliseconds staring at periods when a little extra blank space followed it.

(Putting two spaces after a comma,  if you’re wondering,  slowed down reading speed,  so don’t do that.)

(One space.) Amusingly, the authors report that they submitted their paper to the journal with two spaces between sentences. The journal changed every one to a single space.

(Two spaces.)  The article is below.  I haven’t downloaded it as I’m at O’Hare writing this, and all you can see is the abstract (which is in Cristakis’s tweet above) but it’s a sign of how venal Springer is that they want $39.95 for a pdf of this article!  Do weigh in below about whether you’re on the one-space or two-space side. 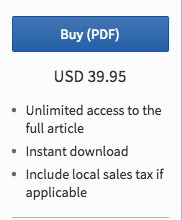 190 thoughts on “One space or two after a sentence?”