The John Templeton Foundation, in collaboration with Arizona State University (shame on them!) has a “Think Write Publish” (TWP) program in which young people are taught how to write “nonfiction” narratives that show the harmony between science and religion.  The shame also extends to the National Academies of Science (97% of whose members are outright atheists), who hosted one of their events in October of last year. Templeton also appears to contribute financially to the magazine Issues in Science and Technology, whose page lists as sponsors just these three entities, two of whom are public universities.

The magazine’s editor, Daniel Sarewitz, is not only known for his strenuous attempts to reconcile science and faith (see here and here, for instance), but admits in his Editor’s Journal that he publishes several of the TWP pieces in the magazine. I doubt that many of the National Academies’ members know how Templeton is subtly undermining their science by sneaking in religion. Sarewitz adds this:

Science and religion have become opposing pawns in the divisive and ugly political game that mars the United States today. It is only a small oversimplification to suggest that science is increasingly claimed by liberals as their rightful domain, the rational basis for policy making and the foundation of progress, whereas for conservatives, religion provides the moral precepts of a good society and a bulwark against the promiscuous change that can be thrust upon families and communities by scientific and technological advance.

But in a culture—Western culture, today—where science and religion are so often cast as irreconcilable combatants, is it simply too obvious an irony to point out that many of the founding thinkers of the Enlightenment (including Newton and Kepler) were highly devout men? And although it is certainly the case that a much higher proportion of nonscientists (something over 80%) in the United States believe in God than do scientists (something over 30%), don’t the many thousands of scientists who nonetheless are believers falsify the idea that there is a state of inherent conflict between science and religion?

I’ve refuted this argument for “compatibility” (he’s really arguing for compartmentalization) too often to do it again here.  A scientist who is a believer is in a state of cognitive disassociation, if not cognitive dissonance. And who the hell cares if Newton and Kepler were devout? Everybody was devout then! You might as well use this to argue for the compatibility between religion and the steam engine. Sometimes I think these people realize the weaknesses of their arguments, but trot them out anyway. After all, the terms of Sir John Templeton’s will stipulate that his dosh has to go to ends like this.

At any rate, here’s one of the activities that the TWP program is putting on. It’s free, so you can go!

A celebration of the ways that science and religion interact and harmonize to create more meaning, understanding, and purpose in our world.  This day-long festival offers guests the opportunity to explore compelling new stories and thought provoking ideas presented by writers, thinkers, skeptics, and believers from various disciplines and denominations in a series of events that will challenge and inspire. Come for an hour, come for the day.  The Festival–set in the magical Mansion on O St., near Dupont Circle—will present new ways to understand and appreciate our complicated world. 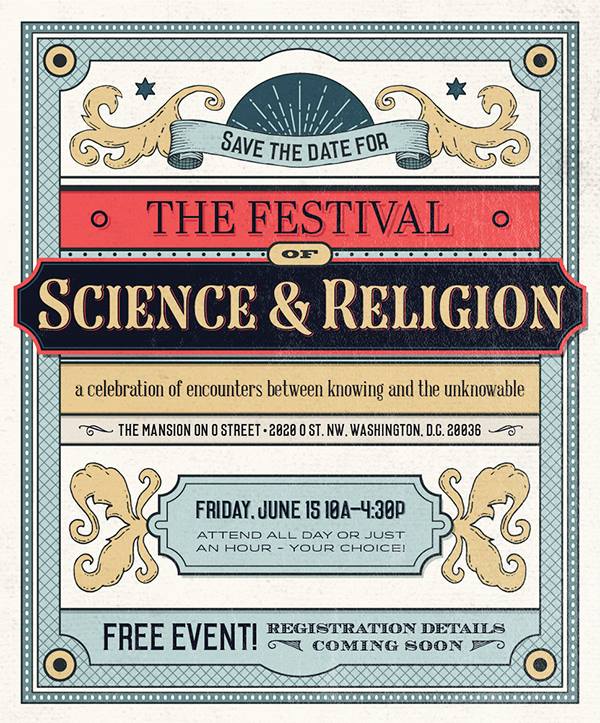 More about the TWP and the shameful participation of Arizona State University in this religion-mongering. I guess ASU needs the dosh:

Science and religion, despite their rich, interwoven history, are too often portrayed as opposites in nearly every way, irreconcilable by definition. Indeed, our increasingly polarized societies seem to encourage the proposition that these two ways of knowing the world cannot productively co-exist, that they encounter each other through conflict and contradiction.

. . . Proposals for personal stories were welcome–from scientists, religious figures, or (just as importantly) everyday people seeking to explore or reconcile their own spiritual and scientific beliefs. But so were research-based narratives about historical moments in scientific and religious discovery, or contemporary scientists wrestling with the ethical quandaries their work entails, or religious, legal, humanistic, or other experts who have encountered interesting and revealing instances of science-religion dialogue and harmonies. Above all, we were looking for narratives—true stories, rich with scene, character, and detail—that provide a nuanced, thoughtful consideration of the complex interplay and unexplored interdependencies and synergies between science and religion.

Some of the fellows and what they’re paid for: 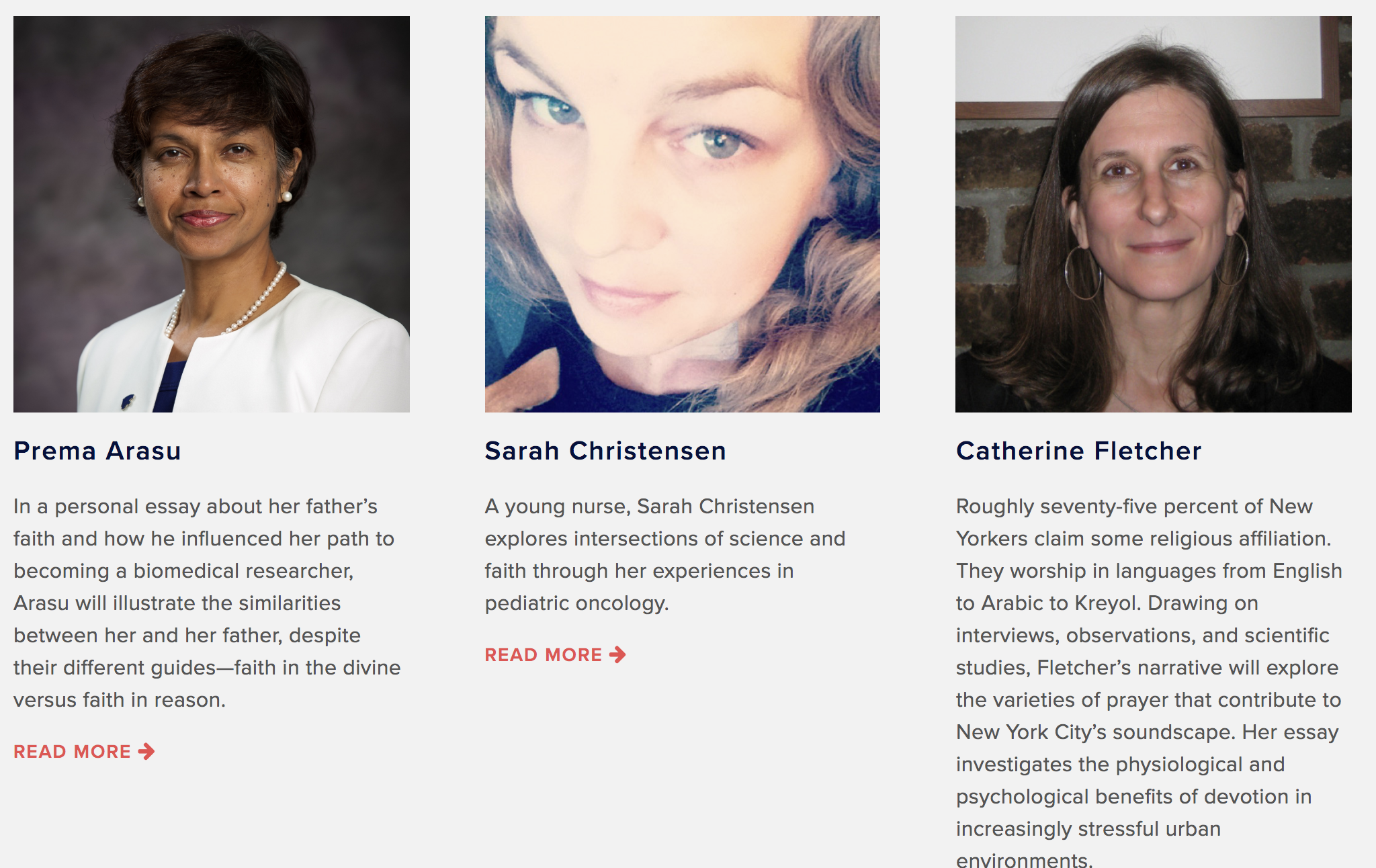 The stories may be true (“I thought about God when I was counting my flies”) but the tenets of religions are not true. Somehow they appear to be conflated in this program. And there’s that word “nuanced” again, which is a sure sign you should run for the hills. Anybody who thinks that Templeton is moving away from Sir John’s intentions (i.e., to show that science proves God), should realize that it hasn’t: it’s just gotten sneakier. That’s evident in their “true stories” logo, which, while technically accurate, also implies that there’s some truth in religion, and by that I mean that God exists—part of the Templeton program:

Finally, here’s Templeton’s press release announcing their program and how it will help science and religion reinforce each other.  I’ve put their ultimate aim in bold:

Science and religion, despite their rich, interwoven history, are too often portrayed as opposites in nearly every way, irreconcilable by definition. Indeed, our increasingly polarized societies seem to encourage the proposition that these two ways of knowing the world cannot productively co-exist, that they encounter each other through conflict and contradiction.

Our project—Think Write Publish—advances a different proposition: that science and religion can reinforce each other to allow a more nuanced, profound, and rewarding experience of our world and our place in it. We will use creative nonfiction writing to explore and advance this proposition. We are building a new community of storytellers who will write, publish, and disseminate engaging and inspiring nonfiction narratives of harmonies, reconciliation, and even productive interaction between science and religion.

We will award twelve $10,000 two-year TWP Science & Religion Fellowships. Open to novice and experienced writers, anyone who has a compelling true story or true stories illustrating or exploring harmonies between science and religion is encouraged to apply. Over a two-year period, Fellows will develop, write, and market their creative nonfiction stories. They will be mentored throughout the project by experienced writers, editors and teachers. They and their stories will be featured in a series of regional and national events.

One of the best ways to foster collective understanding is with a good story. Creative nonfiction– true stories, well told–allows for complexity, novelty, and revelation, and through compelling voice, suspense, character development, and well-chosen details has the potential to engage the widest audiences and change the way they know the world.

What they are doing is using public-relations techniques and experienced editors to try to persuade the public that science and religion are the very best of friends. Templeton is of course allowed to do that, and some of them may even believe it. But it’s a waste of money, especially in a Western world becoming ever more secular. It also serves to give credibility to the tenets of religion. For Arizona State University (a public university) and the National Academies of Science (an institution that advises the U.S. government) to engage in such nonsense is a step backward in a world that’s shedding its shackles of faith.