Oliver Burkeman is a Guardian writer based in New York, and his new column at the site may upset a lot of readers, though I’m not quite sure. Click on the screenshot to go to his short piece.

Burkeman was apparently greatly influenced by a 2011 BBC edition of the “In Our Time” program (the 500th show) featuring Simon Blackburn, Helen Beebee, and Galen Strawson, all professors of philosophy at British Universities. You might want to hear the 32-minutes show here (click on screenshot): 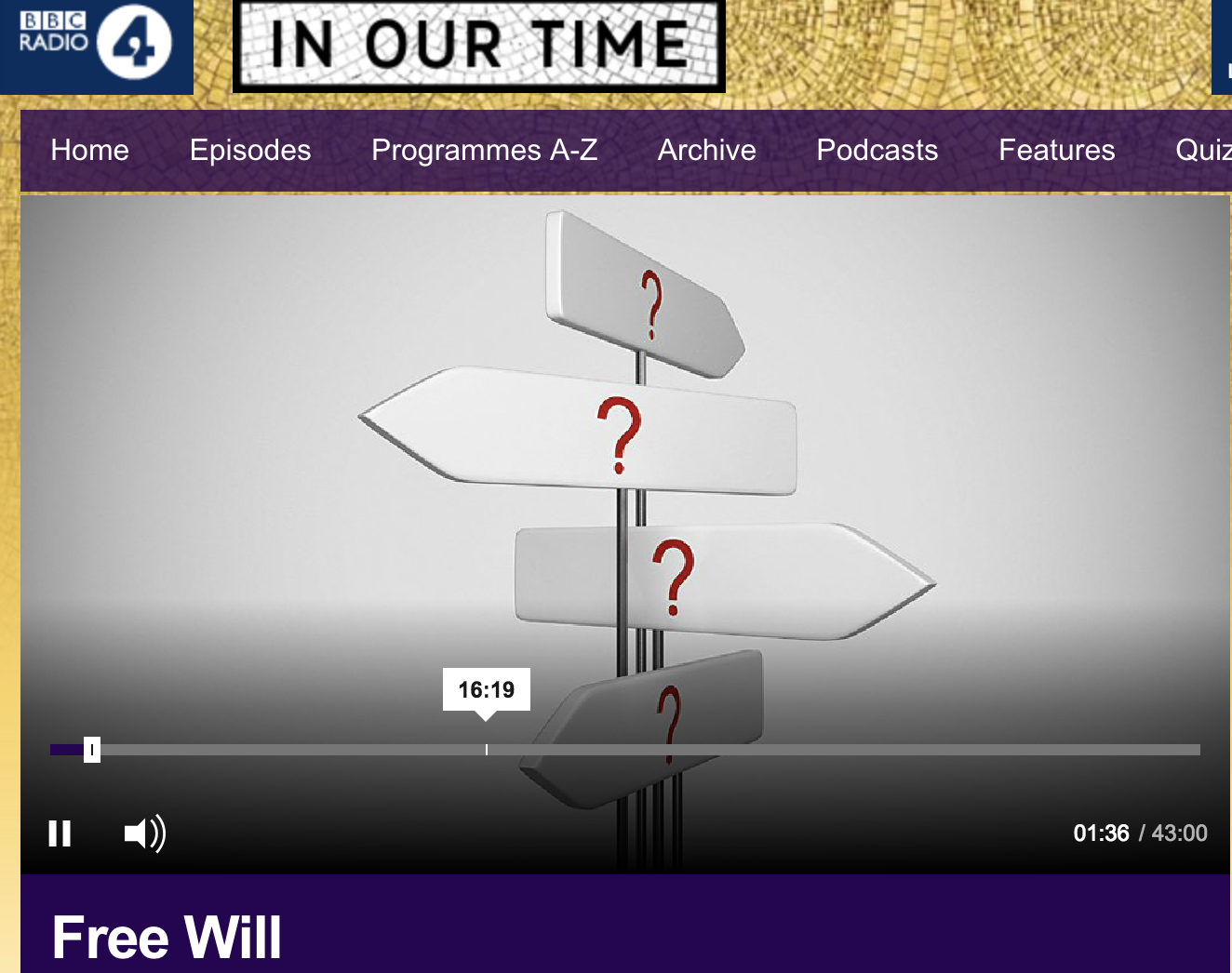 It’s a very enlightening and informed discussion, and particularly interesting in how the discussants deal with the idea of “moral responsibility”. All three philosophers save Beebee are determinists: she argues that science is a long way from determining whether determinism is true, though I think she’s dead wrong here. As Sean Carroll notes, the laws of physics of everyday life are completely understood, and to me that means that determinism is correct (save for the possibility of true quantum indeterminacy, which can’t play a role in any meaningful notion of human agency, since we have no control over our electrons).

Both Beebee and Blackburn evince various degrees of “compatibilism”: that there are some notions of free will that are compatible with determinism. But none of the discussants espouse any form of contracausal free will: that at any time, you could have done something other than what you did. Blackburn’s compatibilism, for instance, includes the idea that using the word “ought” confers a degree of moral responsibility on an action, and ergo frames a form of free will. “You ought to be nicer to Sam,” is somehow taken as an indication of moral responsibility and thus free will, though the connection is not obvious to me.

I’ve been accused, for instance, of being a compatibilist by using the word “ought”. But to me that the word is shorthand for the idea “if you want good consequence X, you should do action Y, and if you don’t, you can be called out.” I see no sense of agency in using that word, or that it plays a role in any form of free will that’s meaningful. Rather, using “ought” is just telling someone that actions have predictable consequences, and you can be shamed/punished/jailed for not doing something that promotes good consequences. On a non-moral level, it’s like telling someone who’s never used a wrench that “if you want to make the nut tighter, you ought to turn the wrench clockwise.” Why does that not limn a free will for wrenches?

In other words, in a decision having consequences for other people, you can be  responsible in a way that leads to useful societal approbation or disapprobation, but not morally responsible, which to me means that when you do a bad act, you could have done the good alternative. All this, of course, doesn’t mean that you shouldn’t be praised or scorned, for those actions tend to promote consequences that we think are good for society.

Burkemann seems to have grasped what is ineluctably true: whatever credit your claim for your accomplishments, it all comes back to factors over which you have no control. Again, this does not make blame or praise useless, it just means that the individual wasn’t able to make libertarian choices that determined his or her success or failure.  That should make us think twice about what we’re really doing when we give praise or blame, and that’s what Burkeman’s concerned with in his essay (my emphasis):

Eventually, working backwards, you will reach some starting point that can’t have been your doing. The troubling conclusion is that the person born in poverty, with no parental support, who scrimps to put himself or herself through college, finally achieving success through ceaseless suffering, owes their triumph no less to luck than, say, Eric Trump does. Or, as Strawson pithily puts it: “Luck swallows everything.”

Among other things, this has interesting implications for the way we talk, these days, about “privilege”. Some people undoubtedly have advantages over others thanks to their gender, race or class. But if it’s true that luck swallows everything, there is also a sense in which differing degrees of privilege are the only thing there is: your social situation is a matter of luck, but then so are your underlying skills and character.

I realise that plenty of people, some much smarter than me, don’t buy this view of free will at all. I’ve never been able to find a flaw with it, though. It’s dizzyingly unsettling, but that’s just my tough luck.

The connection between determinism and the social-justice notion of “privilege” is one worth exploring, though I haven’t really begun to think about it. In one sense determinism does vindicate these notions of privilege, for whether someone has a Y chromosome or not, or is born with darkly pigmented skin, is something over which they have no control. Insofar as those factors lead to different life outcomes when they’re just “accidents” (I hope my meaning is clear here), equality of opportunity and treatment seem obvious consequences. But this is also true for wealth, social class, brains, and everything that leads to differential success or failure in life. Thus we can sensibly speak of the “privilege” that comes from being born to a two-parent family, a wealthy family, or a family that prizes education. Indeed, we also have “undeserved” privilege conferred by our genes: whether we’re born smarter or better looking or more athletic.

This leads to an infinite-dimensional intersectionality in which all forms of undeserved “privilege” should be battled: not to make everybody’s life outcome in society equal, but to ensure that everybody gets the same chance to succeed.  Why one form of privilege, say “whiteness” or “maleness” should get more attention than others depends on whether those traits are the most important in determining equal opportunity as opposed to, say, factors like parental wealth, intelligence social class.

That is all above my pay grade, but, as Burkemann notes, we’ll never have equality of outcome, for we’ll always have winners and losers. All we can do is ensure equal opportunity. But that in itself is a huge social task, and it must begin at birth.