A kind reader sent me the email for the Natural History Museum, muzteva@gmail.com, and if you want to write to them about this, feel free. Here’s my email:

To whom it may concern:

As an evolutionary biologist of Jewish ancestry, I am deeply offended at your practice of covering up the human evolution exhibit lest it offend the Haredi Jews who go to your museum. Why would a museum hide the truth, even if it’s offensive to some religious believers? Is this proper in a largely secular state like Israel?

I hope you realize that by literally hiding the evidence for human evolution, you are misleading people: in effect, lying by omission. The truth is the truth, regardless of whether some people are offended because it goes against their upbringing; and by catering to the false beliefs of creationists, you are, in effect, censoring whatever science that some people find unpleasant. This kind of behavior makes me ashamed of my Jewish background.

I have written about your Museum’s activities on my website, which has 55,000 readers:

I hope that in the future you can just present the plain scientific truth about human origins and not worry about who it offends. Your blatant censorship offends me–and has offended many others–but of course you’d prefer to offend scientists and truth-seekers than those who harbor religious superstitions.

From the Times of Israel we have this article (click on screenshot) showing three things: not all Jews accept science; that the ultra-Orthodox Jews (Haredim)—a reclusive, fundamentalist, and extremist branch of the faith—are creationists; and finally that the largely secular character of the Israel government will nevertheless censor real science to cater to this group. 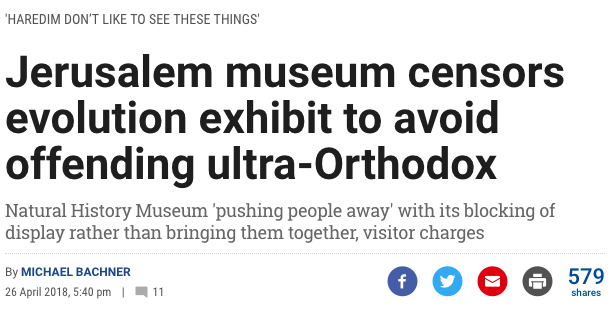 The Natural History Museum in Jerusalem has been keeping an exhibit on human evolution covered under a sheet to avoid offending ultra-Orthodox visitors, and a staff member earlier this month asked a customer to leave when she inquired why the museum was censoring the display.

“I was saddened by it and rather shocked,” the visitor, Chaya David, told The Times of Israel following the incident. “It’s unwarranted and illegal.”

The Hebrew-language display, titled “The beginning of human evolution and culture,” details the stages of the gradual transformation from apes to the modern homo sapiens [sic], complete with various skulls, models and ancient hunting tools along with written explanations.

It is kept under a pink sheet that blocks it from visitors’ view.

Here are two photos of what’s behind the sheet. The article describes the exhibit as outmoded—not updated for decades—so it will surely be wrong. But despite that, it still describes the key fact of human evolution over millions of years (both photos by Michael Bachner), something that the faithful must come to terms with: 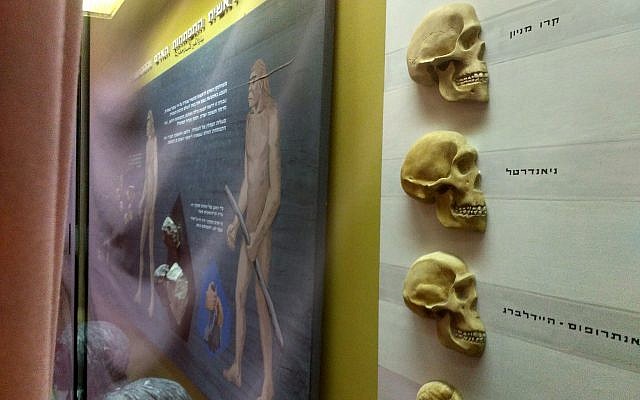 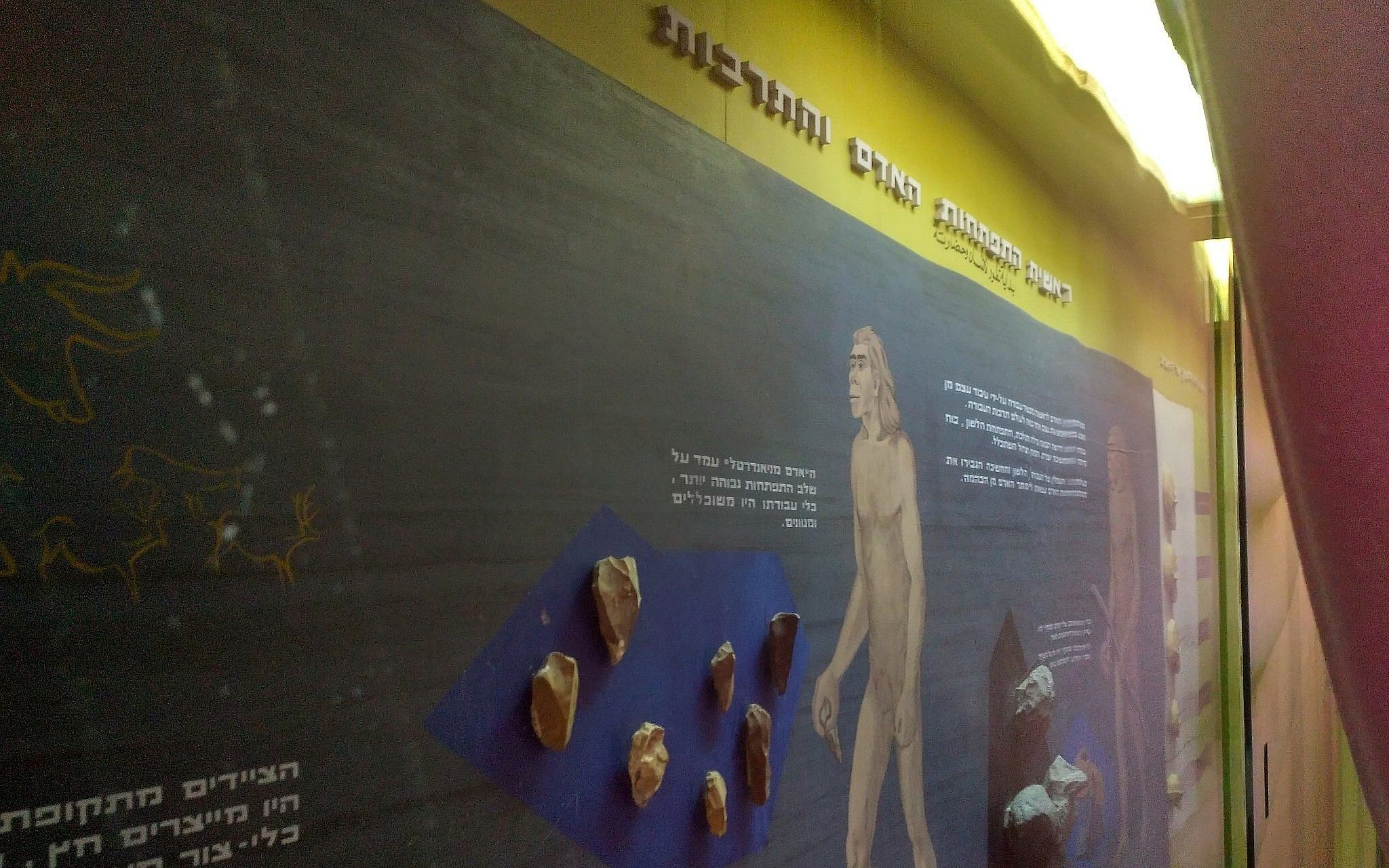 What’s equally offensive is that the local government approved this covering (the Jerusalem Haredi Education Division) and that the exhibit is funded by Israeli taxpayers:

The museum said it had received approval from municipal authorities to hide the exhibit, along with two other displays on dinosaurs and on the human body and sexuality, during visits by ultra-Orthodox groups.

. . . [A] 31-year-old mother of two visited the museum during the Passover festival earlier this month with her three-year-old son.

“Why are they covering this? It’s totally inappropriate,” she said. “And then it dawned on me: I realized it was probably being covered due to some sort of social and political agenda.”

An employee that she asked told her that “Haredim don’t like to see these things,” David recollected.

“I was totally shocked because there weren’t any Haredim there to be offended. It wasn’t making anyone upset at the time,” she charged. “You can’t just choose one exhibit you think might offend someone and self-censor in that manner. It’s sad and unwarranted, and it’s also illegal.”

The employee then recommended that she leave.

The excuse the Museum gave is pathetic: they don’t want to offend the Haredis and doing so would reduce Museum attendance:

When a Times of Israel reporter visited the museum almost a week later, the exhibit was still covered by the sheet.

“The curtain is closed only when there is a Haredi group that reserves an activity ahead of time,” the museum said. “Due to shortage of manpower, the curtain was mistakenly not opened [afterward].

How much “manpower” does it take to open a curtain, for crying out loud?

“The Natural History Museum has existed for 60 years and serves all populations in the city,” the museum added. “We are interested in attracting as many visitors as possible.”

Well, that’s not excuse for a state that’s modern, science-friendly, and largely secular. Scientific truth is scientific truth, and shouldn’t be hidden from the public by the government because it offends religion. Such censorship would never stand in the U.S.

It’s as if the Smithsonian Museum of Natural History in Washington D.C. covered up its evolution exhibit permanently (or eliminated it) because 39% of Americans are young-earth creationists. A religious museum can promulgate whatever lies it wants (viz., the Creation Museum in Kentucky), but a public museum in a secular state can neither lie to the public nor censor exhibits (lying by omission) because they go against the religious dictates of any sect.

I tried to find the email address of the Museum so I could protest, but the site is in Hebrew and also seems to lack email contact information. If you can find it, please let me know.