Bavaria is of course a pretty Catholic area of Germany, but I’m not sure how many Bavarians really believe in God (Bavarians out there should weigh in). Nevertheless, this new law, described in the BBC article below (click on screenshot) seems to violate all canons of secularity. 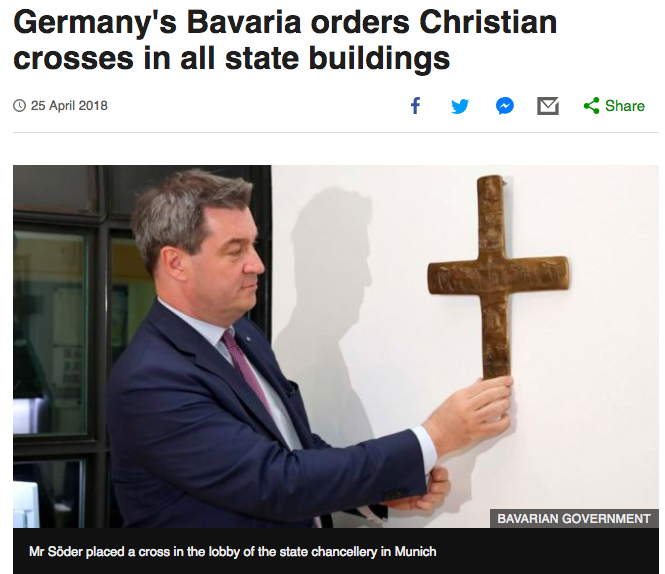 The German state of Bavaria has ordered Christian crosses to be placed at the entrances to its public buildings.

Premier Markus Söder said crosses should not be seen as religious symbols but as a “clear avowal of our Bavarian identity and Christian values”.

But opponents said the ruling Christian Social Union (CSU) was trying to score points ahead of October’s election amid fears of a rise of the far right.

Crosses are compulsory in public school classrooms and courtrooms.

The decree, which comes into effect on 1 June, will not affect municipal and federal government buildings in the predominantly Roman Catholic southern state.

Reader Florian tells me that the school cross bit is incorrect, noting that “In 1995 the German Supreme Court (Bundesverfassungsgericht) ruled that the Bavarian law mandating crosses in schools was against the Constitution, in particular article 4, which grants freedom of religion. The Bavarian state still stipulates that crosses should be there, but they have to be taken down when people sue.” Clearly Bavaria needs a Freedom from Religion foundation to file these lawsuits! Why should there have to be a lawsuit to remove each separate cross?

Söder is talking out of both sides of his mouth. It’s even more ridiculous in light of his statement (in German) that “The cross is a fundamental symbol of our Bavarian identity and way of life. He’s not fooling anyone, but clearly pandering to the religious right. This kind of nonsense is also going on in Turkey and India: increasing religiosity of a right-wing government. And then of course there’s the U.S. . . .

This part, however, confuses me:

The decree, which comes into effect on 1 June, will not affect municipal and federal government buildings in the predominantly Roman Catholic southern state.

What is the difference between a public building and a “municipal and federal government building”? The BBC doesn’t explain.

At any rate, these are rear-guard efforts in a West that’s losing its religion. I hope every Bavarian town sues to get the crosses out of the schools, and that this foolish law is overturned.