Kristel Clayville is a visiting assistant professor of religion at Eureka College, a fellow at the MacLean Center for Clinical Medical Ethics at the University of Chicago, as well as as an ordained minister in the Disciples of Christ branch of the Christian Church.  Yet with all of those credentials (most especially her status as an Christian pastor), she surprised me—and a lot of other people—with her article in Religion Dispatches, “Why I’m not an organ donor.”

Her argument, mean-spirited for anyone, much less for a medical ethicist and a minister, was that she wasn’t going to donate any of her organs because she didn’t like the criteria used to rank people on organ-donation lists. Her claim was that, it helps to be rich and white to get an organ; so that those having “minority status” and lacking  “financial means” aren’t treated equitably, and social justice isn’t satisfied. Therefore she is taking her liver and going home. That is, she refuses to donate her organs because the system is broken.

In fact, I doubt the system is nearly as broken as she asserts. While it may be the case that rich people may be able to get on different state lists more easily, increasing their chances of getting an organ, or having a “home caregiver” (that criterion is not meant to help the wealthy, but to make recovery more likely), plenty of poor people get organs. (A surgeon from Michigan just told me that Clayville is dead wrong in her overall claim.) I see this on the news all the time, especially because I live on the south side of Chicago which is largely poor and black. (But Clayville works here, too!) But the pie chart below tells the tale.

Saying you’re not going to donate your organs because the system isn’t run according to your own liking is pure madness, for it means that people become more likely to die so you can maintain your own sense of “purity”. That is “social justice warriorism” taken to its logical but horrendous extreme. As I wrote in my critique of Clayville’s piece:

What kind of Christian is she? When she meets Jesus, will she explain, “Lord, I thought it was better to let someone die than to tolerate the injustices of organ donation”?

I wasn’t the only one to take Clayville to the woodshed for her unbelievable selfishness and narcissism. She’s now written a new response, also in Religion Dispatches, called “You gotta have heart: A response to critics of ‘Why I’m not an organ donor’.”  None of her responses to the critics are satisfactory.

First, she has to go after her prime critic, which turns out to be me. Although my criticism didn’t call her names, she claims my argument was “ad hominem”. Apparently she doesn’t know that that term means, which is that one says that an argument is wrong because of the character of its proponent,not the argument’s claims itself.

But my argument was not ad hominem. No, I criticized her contention that if the organ-donation system has inequities that she doesn’t like, she’s not going to donate her organs. That means she’s made a choice that people could die to satisfy her own notions of how the system should work. It may not work perfectly, but by no means are white people and those with means invariably put atop the list, and so such a decision is a very bad one, possibly leading to people dying because of her ideology, which will die with her. That is an argument based on the irrationality of putting one’s moral purity above the lives of other people. My counter-argument is based on the decrease in well-being that would occur if people followed Clayville’s logic.

As far as ad hominems are concerned, get a look at this quote from her new piece. Her argument against what I said above is that I am simply not qualified to judge what she said because I am religiously ignorant. And yet her original argument had nothing to do with religion!:

Recently, I made a lot of people angry with my piece, “Why I’m not an Organ Donor,” with comments generally falling into two broad categories: ad hominem attacks and sincere questions about my position. Of the former, biologist/blogger Jerry Coyne’s stand out, both because of his platform and because they were so over the top. I’m not sure why any religion scholar would take JC  [“JC”? Don’t I even get the dignity of being called “Coyne”?] seriously. He knows nothing theoretical or practical about religion, yet he continues to write about it, masking his lack of knowledge with unprofessional and unproductive ad hominem attacks.

In fact, I preferred the classic “slut” comment to JC’s shallow engagement with my piece. At least that comment made the point that any woman on the internet is vulnerable to sex shaming even when she’s saying that she doesn’t want to share her body with others. There’s no masking there, just a gut reaction, which is at least more honest than JC’s pretense at engagement.

Note how she juxtaposes my criticism with someone else’s “you’re-a-slut argument”, which I deplore. That’s just a cheap way of dismissing me by saying I’m worse than a “slut shamer.”

As for my “knowing nothing theoretical or practical about religion”, she clearly knows little of what I know. I would claim that I know more about theological argument, and the contents of the Bible, than the vast majority educated Americans, including believers. No, Dr. Clayville, you’re not getting off that easily, especially because your original argument said nothing about religion save that many pastors favor organ donation.

The remainder of the arguments in her rebuttal—if they can be called arguments—hold no water. She considers her refusal to donate organs as being like a “conscientious objector” (CO): one who refuses to join the military or fight in a war. But the simile is weak: a CO (I was one) is somebody who doesn’t want to kill people, while Clayville is making a decision that might result in somebody dying.

Clayville also claims that being a critic of the system, albeit a privileged one, entitles her to take her organs to the grave with her:

Additionally, once I’ve done the work of describing the organ economy, I feel like I have some choices about how to interact with it. If it’s an economy, then I can choose whether or not to be a customer or a product in it. That’s more privilege than a lot of people have.

True, anyone can choose to opt out of organ donation, though I don’t see how “privilege” enters into people’s desire to neither donate nor receive organs. That is of course their right. But refusing to do so because the system is less equitable than you want is a bad reason to make a decision that could lead to to someone else’s death.

And is the system really so inequitable? Here’s a chart from Organdonor.gov showing that at least 42% of transplant recipients are of minority status. Note, for instance, that African Americans constitute about 13% of the U.S. population but made up 21% of organ recipients. 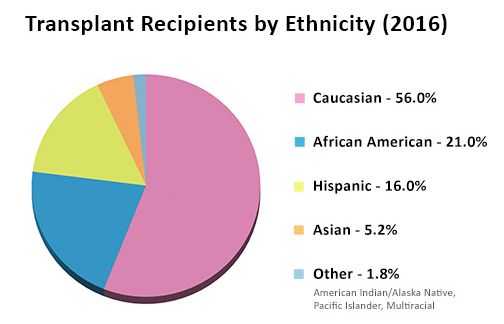 In light of this, Clayville has some ‘splaining to do!

Finally, I simply don’t believe her response below; read her first article if you think she’s not concerned about moral purity:

Aren’t you just worried about your own moral purity?

No. I worry a lot about moral purity and the role it plays in our society. I think of moral purity as funding black and white thinking about ethics and making sure that you are always on the good side of that divide. I’ve presented organ transplantation and donation as entirely gray. The microscopic and telescopic stories can both be true, even at the same time. The question is which one is most compelling to you as a story that directs ethical action. For me the telescopic story is the most compelling and leads me to the ethical conclusion that I need to work to make the system better, so I do. The microscopic story has never been compelling to me, and in fact, with patients who have received transplants, that story can be a source of psychological trauma. They often feel like they’ve received a gift they can’t repay, that they were unworthy, or that the life-for-life exchange becomes overwhelming for them.

“Entirely gray”? If anyone, rich, poor, black or white, is enabled to live when they could have died, that seems to me pretty black and white. Yes, the system might not be perfect, but plenty of people have expressed huge gratitude to those who donated organs that saved their lives. You see this on the news all the time. Often someone will befriend the family of someone whose death gave them a life-saving organ, or will bond with a stranger who unselfishly gave them a kidney or part of a liver. The “psychological trauma” that, says Clayville, is one reason not to participate in the system, is largely a fiction. After all, those people put themselves on a transplant list, and didn’t have to. Presumably they didn’t want to die!

Finally, although I don’t like to engage in argument in the comment section of other people’s articles, I couldn’t resist in this case. Here’s one of Clayville’s critics and her response, which I found amazingly ignorant. I had to respond to her claim about “all religious people being stupid” and my books being “good on science and lacking in religion” (I’m convinced she hasn’t read at least two of the three I’ve written.) 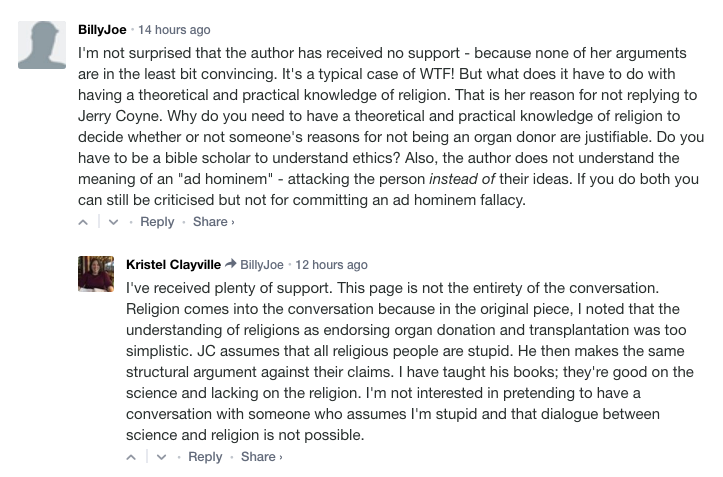 And my response in this thread (there is a missing “know” in the first sentence: 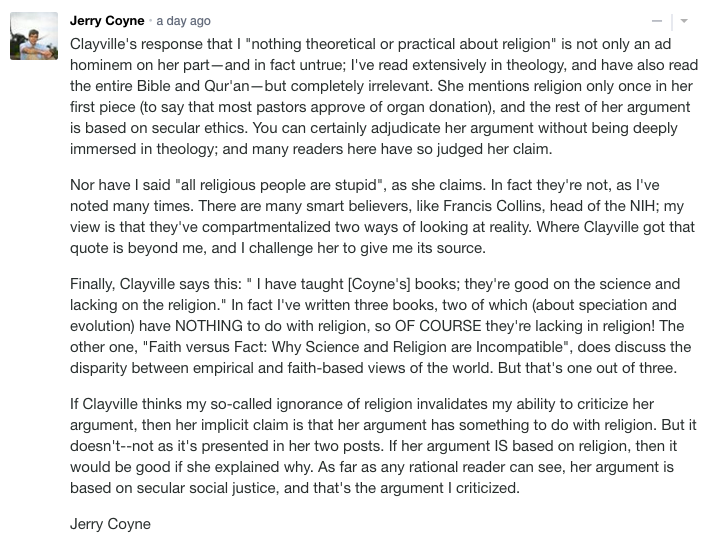 I’m frankly baffled that someone can actually feel as Clayville does, and clearly the organ-donation people—or the many government organizations that urge you to add to your driver’s license or will a statement that you will donate your organs if it’s appropriate—feel otherwise. The chutzpah and self-regard that would lead one to refuse donating their organs on social justice grounds is a mind-set I can’t fathom. Maybe it has something to do with Clayville’s religious views (I can’t say, as she doesn’t make a religious argument), but she’s also at odds, I suspect, with nearly every religious leader in America.

In the end, I think that Clayville’s view really does come from her faith, and is also a slap at what she calls her “progressive, liberal, overeducated, friends (PLOFs).”  That, by the way, is an ad hominem characterization, and I wonder what her friends think of that. What does her friends being “overeducated” and “progressive” have to do with her opposing their views?

And if her argument is based on religion, and I failed to grasp it because I’m religiously ignorant, then she needs to explain the role of religion, as opposed to secular ethics based on simple equity, in her stand.

Here’s a photo of the author from her Twitter feed.  All I’ll add is that I don’t think she belongs on any medical ethics team because she appears to think more about propping up her own moral purity than about saving the lives of people who could receive organ transplants. 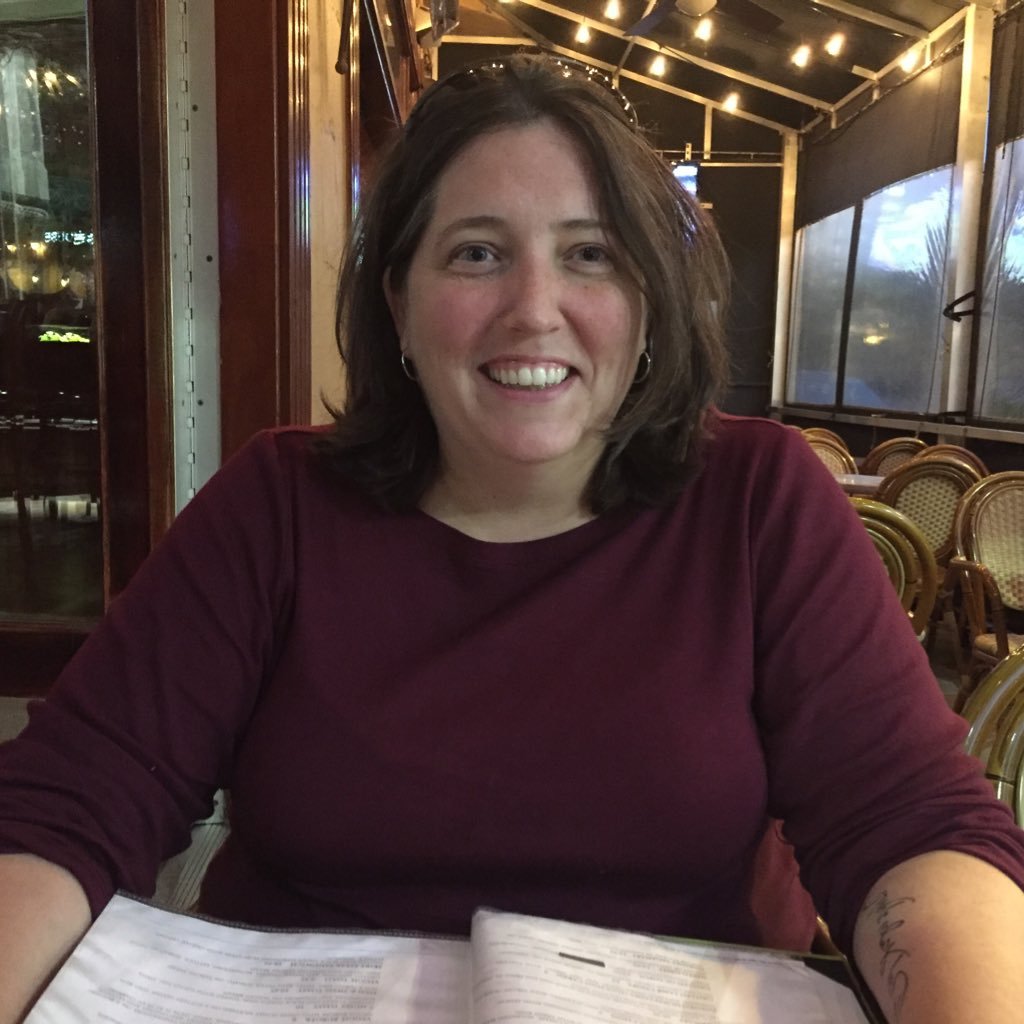 92 thoughts on “Kristel Clayville, who refuses to donate her organs out of Social Justice, responds to criticism”