Here are their names in lights!

I watched the people walk in, and if you didn’t know this was an event rife with discussion of science, meditation, and atheism, you wouldn’t have guessed from the audience: a diverse group of all ages, ethnicities, and sartorial quality. I especially looked at the sex ratio given that Sam has been excoriated for saying that movement atheism was male-dominated because of its “testosterone vibe”. Well, maybe the prominent figures are mostly males, but the audience for this event was pretty much half male and half female. And about half the questions at the end came from women.

We had dinner before the event, as Sam kindly invited me. After dinner, the speakers took a limo from the restaurant to the theater, even though it was only a block away! Such are the perks of fame (see also names in lights above). Matt did some close-up magic at the table, using cards and rubber bands.

The Chicago Theater is a beautiful old venue, with fancy baroque decoration inside and comfortable (albeit small) seats. You can read about it, and see more pictures, here. It seats 3600 people, and I think they sold about 2800 seats.  Inside, on the way to the Green Room, you see the walls decorated with memorabilia from past performances (the theater has been going since 1921 and is a National Historic Landmark).

Backstage before the event. For such a well appointed and famous theater, it had a pretty dire Green Room: 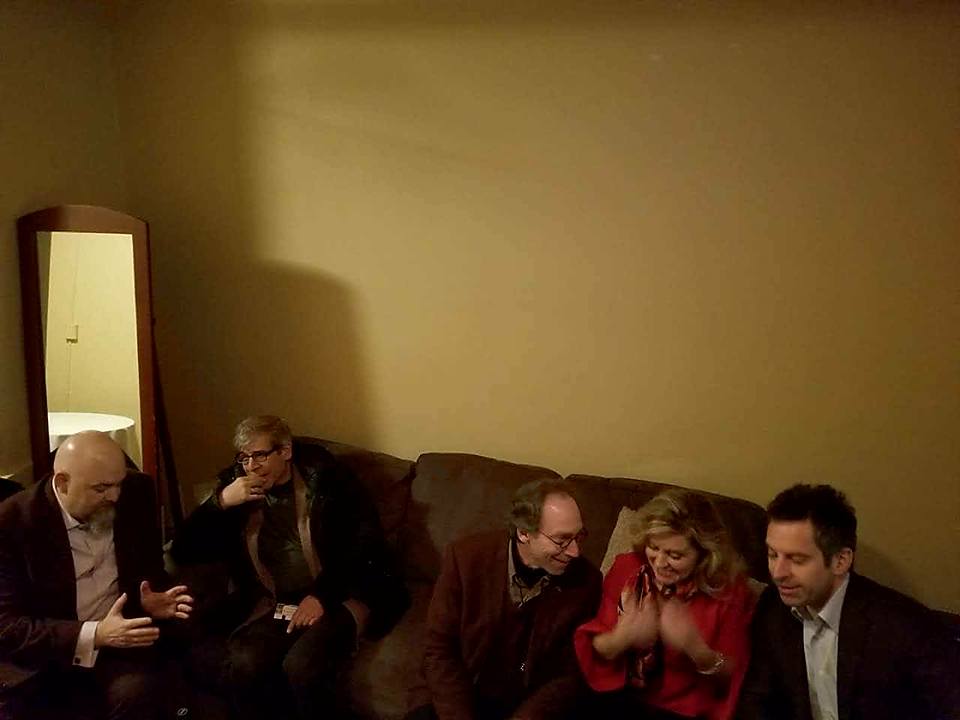 On to my report. The event began at 8 pm and lasted about two hours, with about 1 hour and 10 minutes for conversation between Matt, Sam, and Lawrence, and another 50 minutes for questions.  It was engaging, and the audience was edified and amused, but to my mind there was a bit too much discussion about meditation, consciousness, and the illusion of “self”.  I’d heard all that before in similar events, so it’s not the fault of the speakers.

As is often the case in these presentations, the question-and-answer session was the best part, and the humor of the speakers shone through (they all have different styles of humor).

I asked Sam at dinner if he was going to talk about free will, but he said that they’d covered that topic in a previous event, which was archived on his podcast. Nevertheless, one guy asked the speakers how, given the absence of free will, they could advise him how to cure his addiction to alcohol. That was a good question, because Sam and Lawrence are hard determinists (Matt is a compatibilist but still a determinist.) Answering that question without getting balled up in an infinite regress is quite difficult. If, for instance, you tell someone that they can choose to put themselves in a milieu where there is no alcohol and also surround themselves with supportive people (yes, that’s how it could be done), you risk making people think that you can make such a choice freely, instantiating dualism. I suppose a good answer is that one’s brain is a computer that weighs various inputs before giving the output (a decision), and that the advice Sam gave—which could of course influence the actions of the addict—was also adaptive, in the sense that he was giving strategies that his brain calculated had a higher probability of being useful. Further, we all try to be helpful to cement relationships and get a good reputation—that’s part of the evolved and learned program of our brains. But of course Sam had no “free” choice about his advice, and this shows the difficulty of discussing free will with those who haven’t thought about it.

Another question was from someone who wanted to improve their lives through meditation. What, the guy asked, is the best way to do this? Should he go to India, as Sam did, and join a meditation ashram?

Sam gave a brief history of his own involvement in meditation and his visits to India (this is all in his book Waking Up), and said that there was no “best way,” but a good start was to try to meditate for five minutes a day, observing one’s own thoughts and impressions and blocking everything else out. That was, he said, hard (I know!); nothing how difficult it was when he stayed in India and meditated regularly for fourteen hours a day.  Krauss was dubious about all the talk of meditation and consciousness, and it was clear that he and Sam differ on the importance of such discussion. 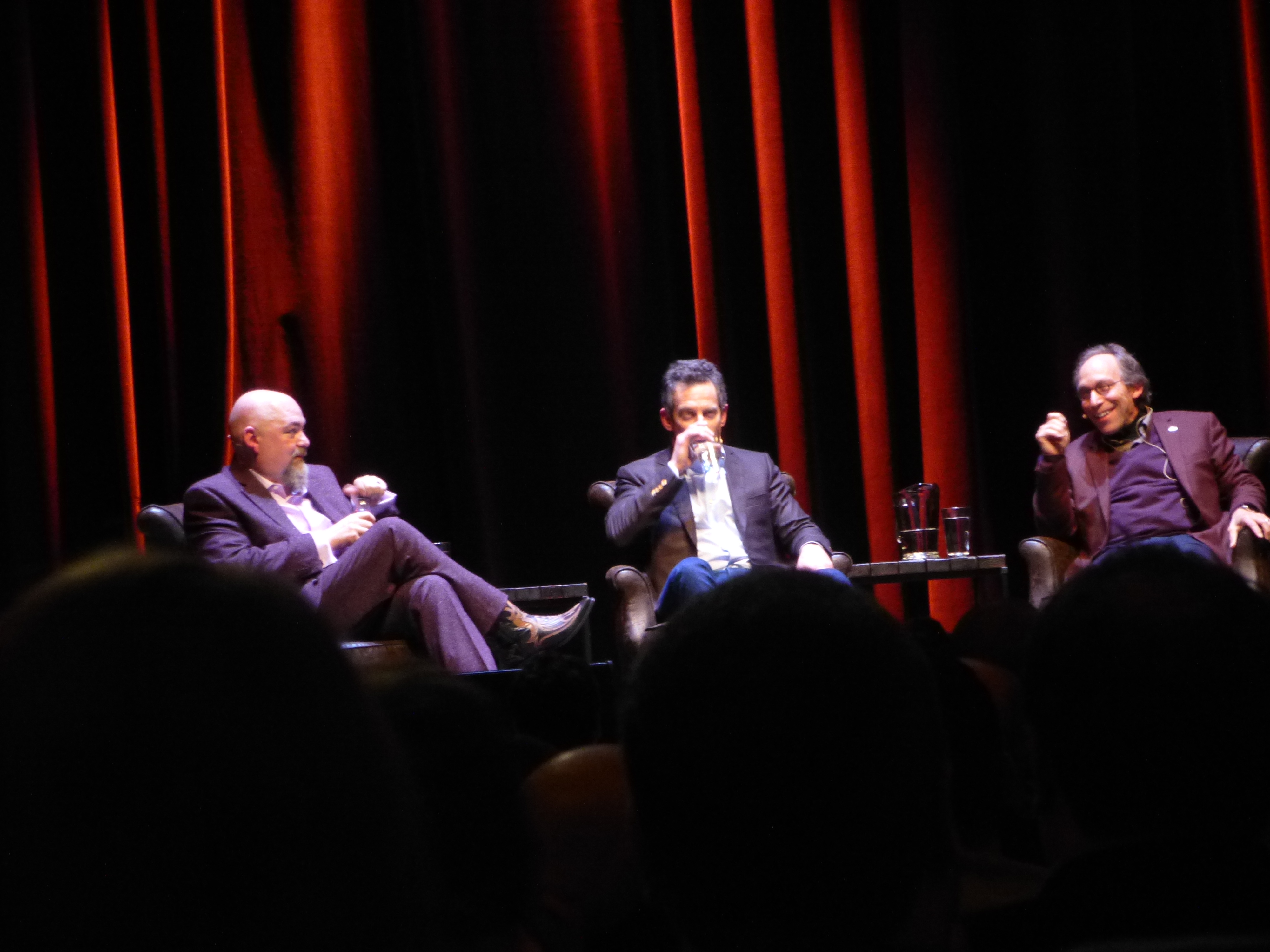 Lawrence’s discussion of how science gets done, describing the discovery of gravitational waves, was animated and most absorbing. I’d heard it before—in Vancouver—but it was nice to experience the infectious enthusiasm when he discusses science. At one point he was asked how we can get kids more interested in science. Krauss said that we need to stop thinking of education as “stuffing people’s brains with facts and making them regurgitate them”, and teach critical thinking: the tools we must use to find out what is true about the world. I agree—with some caveats. Critical-thinking courses are hard, especially for young children (I taught one at the University of Maryland), and, after all, we need some facts, especially if you want to learn science. You simply cannot do science without acquiring a background of what is known. Further, the critical-thinking method as applied to science would differ from that applied to something like literature or philosophy, where the problem is clear thinking and not so much the use of empirical evidence. (Still, one can be critical about evidence when analyzing, say, what a work of literature was intended to convey.)

Krauss broached the idea—one that I’ve often emphasized but is not popular with the public—that most of us do science not to help humanity, but to satisfy our own curiosity. And government should fund that curiosity for two reasons. First, there is often a long-term and unpredictable practical payoff of such research (but that’s still a practical benefit). More important, the findings of science resemble in some ways the outcome of the humanities: they change us as people. I’ve often thought of evolutionary biology, which has few practical applications, as resembling the fine arts of biology, with the difference being that evolutionary biology can also tell us what is true about nature. But both pure science and the humanities can fill us with awe and wonder, and change our outlook on the world.

One further question was posed to the group: How can one best get rid of religion? Sam was the first to field that one, saying that he didn’t conceive of his task as destroying religion so much as teaching people how to think clearly and critically about evidence, and with that would come, he hoped, the End of Faith. He asserted unequivocally that religion was a bad thing, though of course we don’t have a balance sheet for that.  For me, as for Sam, it seems pretty obvious, but we can’t “prove” it. As for his own two daughters, Sam said he’d never lied to them about religion, and tells them that different people believe different things and celebrate their faith in different ways. But he added that both of his daughters think it’s weird that anybody would believe in gods. Sam added, “But of course, having been properly socialized, they’re not assholes.”

That same person asked Sam how one could replace the benefits of religion with secular activities. Sam replied that yes, we’ve failed in our task of helping people get the perks of religion without the superstition. I disagree: it’s not our job to do that, and, as we can see in secularized countries like those of Europe, the lacuna that forms when faith disappears is, like a deep well, filled naturally with other things. There was some discussion of how one can find meaning and purpose without faith, and the answer from the stage was that “you have to find your meaning and purpose from within, for there’s no external source of that.” Well, so much is obvious. I would have added that “meaning and purpose” are simply post facto reifications of “what someone likes to do”, and those concepts aren’t particularly useful.

The final remark came from Lawrence, who said that every time he stays in a hotel, his own gesture to diminish faith was to take the Gideon Bible, wrap it in a piece of paper, and throw it in the trash. Sam remarked dryly, “And that’s why atheists have such a good public image.”

And so the audience, heads filled with Deep Thoughts, spilled out onto the snowy Chicago streets. It was a very big audience, and it’s heartening that so many would come to “a celebration of science and reason.”