I think it’s time I contributed an article to The Conversation showing why science and religion are incompatible, as that site appears to be very soft on faith. As I wrote last year in a piece called “The Conversation kisses the rump of religion again“:

I thought that The Conversation was largely a news and scholarly opinion website, but every once in a while they slip in some religious nonsense that baffles and saddens me. (For one example, see this risible argument for religiously based brain/mind dualism, and this ridiculous slice of tripe explaining why morality requires God). And now we have a piece from yesterday brought to my attention by reader RJC: “Five rational arguments why God (very probably) exists“.

Well, here’s another slice of accommodationist tripe that reader Alex brought to my attention:

It’s by Tom McLeish, a professor of physics at Durham University, but more on him later.

McLeish’s argument is that by insisting that science and religion are enemies, we’re turning religious people away from science—an argument that, as far as I know, has no empirical support. As I’ve said before, there are hundreds of people who have turned toward science by arguments for atheism—arguments that denigrate religion as a “way of knowing”. Dawkins’s old site “Convert’s Corner” attests to that. But I’ve never heard anyone say, “You know, I’d be willing to accept evolution, the Big Bang, or global warming, which I now reject, if those nasty nonbelievers just stopped saying that science and religion are incompatible.” From the very outset, then, McLeish is making a claim that lacks empirical support.

His arguments are familiar, but even dumber than usual. I’m willing to accept that, at the beginning of science, the discipline of natural theology did indeed promote science—by arguing that understanding the universe helped glorifying God by revealing His Big Plan. But those days are over now: scientists are no longer motivated to do science as a way of understanding God and His Ways, and most good scientists in the US and UK are atheists. Religion no longer inspires science, and in some cases, as with cosmology and evolution, it’s a positive impediment. Do remember that the Catholic Church, while saying that it fully accepts the truth of evolution, states out of the other side of its gob that Adam and Eve were real people, and the literal ancestors of us all, and, by the way, we also have souls, too, but animals don’t. There’s no evidence for souls, and good evidence that all humans didn’t descend from just two people in the last few hundred thousand years. (Our minimum “species size” numbered at least 12,500.)

By pretending that religion has any content beyond wish-thinking and superstition, or by showing unwarranted respect for religious tenets and ideas, accommodationists are in fact enabling religion and promoting the most invidious “way of knowing” I can think of—faith.  “A person of faith” is not someone to be admired. Such a person should be criticized for being delusional, and accepting truths on the basis of no good evidence.

When Aristotle was reintroduced to Europe in the 12th century, his scientific work had a great influence on medieval scholars, who were invariably thinkers within a church, synagogue or mosque. A key example is the 13th-century Oxford theologian and later Bishop of Lincoln, Robert Grosseteste, who was also a pioneering early scientist. He presented a vision for how we might obtain new knowledge of the universe, the dawning of the first notions of experiment, and even a “big bang” theory of the cosmos and a concept of multiple universes.

Yet underneath Grosseteste’s work lies a much deeper and developing philosophy of nature. In a commentary on Aristotle’s Posteria Analytics, he describes a uniquely human propensity he calls (in Latin) “sollertia”. By this he means a sort of intense and perceptive ability to look beyond the surface of the material world into its inner structure.

This is remarkably similar to our approach to science today. Isaac Newton described his science as “seeing further than others”. For Grosseteste, our sollertia comes in turn from being created in the image of God. It is a theologically motivated task that contributes to the fulfilment of being human.

Well, of course most scholars in the Middle Ages were “thinkers within a church, synagogue, or mosque” because virtually all intellectuals were. There was no other outlet for the intellect than to install yourself within a religious institution or a university deeply connected with religion. And of course everyone was religious. As for the sollertia, all McLeish is saying is this: “religious thinkers think hard about the divine, and scientists think hard about nature. Therefore the scientific mindset derived from the religious mindset.”

As for Newton’s statement, McLeish takes that way out of context. You may remember that what Newton is supposed to have said is this:

“If I have seen further, it is by standing upon the shoulders of giants.”

Newton is explaining here why he gained scientific fame, not describing the actual process by which he did science. Regardless, it has nothing to do with religion.  And to imply that our own ability to think about science is “theologically motivated” is simply a lie.

As if that wasn’t ludicrous enough, McLeish godsplains that the scientific method—indeed, scientific questions themselves—came from the Book of Job. Get a load of this:

In fact, science also has roots in ancient Jewish history that are as influential as the ancient Greek precedents. Philosopher Susan Neiman recently argued that the Biblical Book of Job should be understood as a foundation pillar of modern philosophy alongside Plato. This is because Job deals head-on with the problem of an apparently chaotic and fitful world, alien to the human predicament and unmoved in the face of suffering. And this, Neiman claims, is the starting point for philosophy.

It might also be the starting point for science, for Job also contains at its pivotal point the most profound nature poem of all ancient writings. Its verse form of questions is also striking to scientists from all ages, who know that asking the right creative questions – rather than always having the correct answer – is what unlocks progress.

Have you journeyed to the springs of the sea?… Where is the way to the abode of light?… From whose womb comes the ice?… Do you know the laws of the heavens? And can you apply them to the earth?

In all, the book contains as many as 160 questions from the fields we now know as meteorology, astronomy, geology and zoology. The content of this timeless text has clearly steered the story of science for centuries.

This is madness. Read that part of the Book of Job. McLeish has eliminated a lot of questions that aren’t in the least scientific, and what is going on here is that God is trying to impress Job with his (God’s power) in contrast to Job’s own impotence, not posing real questions to be answered.

Are these questions from Job “scientific”?

Who hath put wisdom in the inward parts? or who hath given understanding to the heart? Who can number the clouds in wisdom? or who can stay the bottles of heaven, When the dust groweth into hardness, and the clods cleave fast together? Wilt thou hunt the prey for the lion?

But enough.  McLeish is simply making stuff up to try to comport science and religion. But why is he doing this? The biography attached to the piece gives the answer: 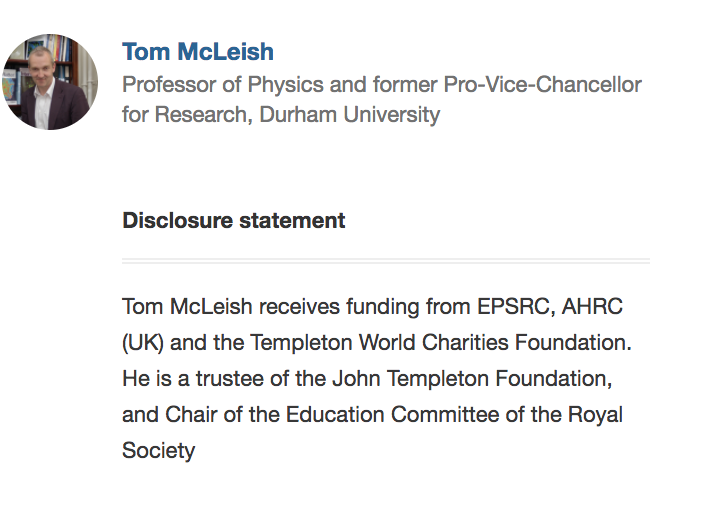 Yes, Templeton again! Did you guess it? I find it very odd that there would be a “disclosure statement” in an article, but I’ve recently seen this with Templeton. I wonder whether this is normal procedure at The Conversation, or has something to do with Templeton’s sordid blending of science and religion, and deep pockets for funding that.

Sadly, religion and science are enemies, for the former touts faith, revelation, and dogma as the way to discern truth about the Universe, while the latter rejects faith absolutely, depending on empirical methods, doubt, confirmation, and consensus. This is all laid out in Faith Versus Fact, and I won’t repeat it here.  One more thing: science has repeatedly disproved the truth claims of religion, while religion has never done that to science. And there is not a single truth about the universe accepted by science that has been overturned by religion. They are indeed enemies, for though they both make claims about the nature of reality, one area has methods to adjudicate those truth claims, while the other (religion, of course), doesn’t. If religion did, we wouldn’t have thousands of religions making different and often incompatible claims about reality.

McLeish is being a good horse in the Templeton stable, for he says and writes exactly what The Organization wants to hear. Sadly, Britain’s Royal Society has been gulled as well, for there’s an announcement at the end of McLeish’s execrable piece:

Tom McLeish is speaking at an event entitled The Science of Belief, organised with the Royal Society at the British Museum on January 26, 2018.

That’s tomorrow! And if you go to the link, you’ll find that Templeton’s Termites have dined all the way into the British Museum and the Royal Society:

In this discussion, chaired by award-winning journalist, writer and BBC broadcaster Samira Ahmed, scientists Colin Blakemore and Tom McLeish examine how the cognitive impetus that drove the emergence of science might be considered to be the same impetus that fostered religion and other metaphysical beliefs.

They will discuss how science is itself at the heart of being human, and can be traced back through art, philosophy and ancient stories, including those in religious traditions.

Presented in collaboration with the Royal Society.

53 thoughts on “More accommodationism at “The Conversation””