If you looked at Heather Heying’s tw**t in this morning’s Hili dialogue, you’ll see this:

What’s got you down?

The “salsa accused of constructing masculinity” reference intrigued me, as it looked like one of those obscurantist po-mo pieces that keep academics and journals (predatory or not) busy without contributing anything to society. So I looked the article up, and, indeed, here it is (reference below, free access, pdf here; click on screenshot to see full article):

I can summarize the paper in a space shorter than even the paper’s own abstract; here’s my summary:

(Pico de gallo, meaning “beak of the rooster” in Spanish, is a Mexican condiment made of chopped tomatoes, onions, jalapeno peppers and cilantro. It’s used on foods like tacos or fajitas.)

That’s it, and it may well be true, but does it merit a paper? We all know that home barbecuing is one form of cooking largely monopolized by men, though I’m increasingly seeing women do it. But do Hispanic men pride themselves on having bigger grills, or on eating a pico de gallo with more hot peppers? That’s what Hilario Molina, writing in Identities: Global Studies in Culture and Power, concludes.

But how does he arrive at this conclusion? Does he take a survey or do a poll? No, he does what he calls “autoethnography,” which appears to be a fancy word for “anecdotal observation”. In Molina’s case, he (his students verify his sex and also have some pungent words about his teaching) went to 30 cookouts involving Mexican-Americans in South Texas. From these “field observations,” he simply chooses a number of observations and anecdotes to support his thesis, fleshing them out with tedious and obscure language that simply points to my conclusions above. That’s it—seriously.

I’ll present a few passages to show what this species of sociologist is up to. Note especially the pompous and bad writing meant to give an air of profundity to otherwise trite observations:

Although the physical environment sets the social space, the stage for manly performance, the pico de gallo  and the grill are direct identifiers of masculinity. This is not to say that men do not venture into the kitchen; however, they do so under an umbrella of gendered space immunity. The entry into feminine space is to comply with a gender role which takes precedence over gender– environment boundaries, such as needing the means to make the pico de gallo . As a result, negative social sanctions are non-existent because the trespass into feminised space is a requirement for the ‘ journey’ of macho or male  socialisation, as demonstrated in the passage below that took place at a participant’ s house:

A middle-aged man chops onions, cilantro, tomatoes, and jalapenos; then, placing these ingredients in a glass bowl, he squeezes lemon juice over it. ‘Vieja (Spanish slang for wife) come and try the pico de gallo’, he yells at the wall in front of him. A woman comes from another room. ‘It is too hot! I do not think we will be able to have any’, she protests after tasting it. ‘I will make two; one for us and one for you all’, he stated in a firm tone.

What a sexist pig!

Here’s another bit of “field work”:

Thus, grilling links ‘ man’ to both a present gender identity and one which has a historical and trans-generational recognition of dominance and mastery of the environment whereby ‘ nature’ has become the cognitive embodiment of the social and cultural factors of symbolic conquests. Within this stratum, grilling game (meat) is indicative of manliness and participant attempts to let those around him know his level of manliness, as shown in this passage, an interaction which directly drew my attention in this cookout:

A mature, aged man, surrounded by a myriad of young males, standing near a grill and holding a beer, said, ‘The smell of this mesquite burning reminds me of a time when I was about your age, and I was living in the campo (rural area)’. He then added, ‘Your father and I had to walk for miles to get to school. Today, you all sure have it easy’.

The grill is both a prerequisite for a boy seeking to form a gender identity and a signifier of economic stability and ability as a provider – important qualities of a macho . Thus, a public display unfolds in which a man shows himself enduring, surviving and eventually succeeding against ‘ nature’ – representative of life’ s challenges. By grilling for those within the subculture, he is publically [sic] committing to the group’ s norms and values as his ‘self’ becomes part of the structure.

Well, the statement is nothing more than the common claim that “we had it worse than you when we were kids”, something that’s hardly unique to Mexican-Americans—or to men. Remember the Four Yorkshiremen of Monty Python? There’s nothing in the statement above about constructing a gender identity, demonstrating that the author is simply using anything to reinforce his preordained conclusion.  This is not objective investigation but confirmation bias.

And here Molina explains the significance of his work:

This article contributes to the studies of gender roles and Latino issues by incorporating masculinity theory to present a sociological perspective on working-class Mexican American machos  in the RGV. As such, the purpose of this article is to explain how the behaviour of manliness comes from a traditional and ritualistic association to the natural world. Mexican American masculinity is measured against the gender formation of men’ s and women’ s roles in the RGV. Without the social construction of feminine space (indoors) and masculine space (outdoors), mild salsa for the women and children versus a spicy salsa for the men and the significance of the grill’ s size, the cultural meaning of masculinity (machismo) as representing the apex would not exist.

Within this perception of reality, masculine space serves to define ‘ his’ group position but also serves as a stage for gender role performances. Whereas the pico de gallo  and the barbeque grill are symbolic indicators of masculine discourse and social interaction, they rely on its gender opposite (marianismo) to clearly construct the macho  hierarchy. Therefore, we see how working-class Mexican American males pursue this apex status and also how they transmit these subcultural values of masculinity to the next generation of machitos (little men).

The significance of this project is twofold: (1) it explains gender formation of working-class Mexican Americans living in the RGV area; and (2) this group is, according to demographic scholars, such as Rodriguez and his colleagues (2008 ), the fastest and largest growing ethnic group in the United States. Within the Latinos/as community, Mexican and Mexican Americans account for more than 60% of this ethnic category; as a result, it is essential that studies begin to address structural issues of inequality endemic within this community. In addition, studies must also be conducted on other subcultures where subordinate groups encounter structural and cultural challenges.

This smacks of desperation and a search for tenure. The conclusions may be correct, but they are based on anecdotal observations, not any kind of systematic study. Plus they’re overblown by couching them in po-mo jargon like “gender role performances” and “construct the macho hierarchy.”  Finally, yes, the Hispanic community may be growing rapidly, but seriously, do studies of grill size and pico de gallo help us to either understand or interpret that phenomenon? Inequality of grill performance and the spiciness of pico de gallo is hardly the kind of “inequality” that American liberals need to address!

Now I’m not saying anything here about the quality of this journal, or of sociological work as a whole (yes, there’s good work in the field). What I’m saying is that when serious academics engage in this kind of work, something is wrong with the academic standards of the field. Increasingly, I see trivial and PREORDAINED conclusions tricked out in fancy-schmancy language designed to make them look profound. Further, we see anecdotes often used instead of systematic analysis. I think I could find exactly these conclusions if I went to a bunch of cookouts by white people: men would dominate the cooking and I would probably find—at least occasionally—some guy boasting about how hot he likes his hot sauce. So the conclusions, based as they are on anecdotes, aren’t even unique to Mexican-Americans. Or, if they are, it hasn’t been demonstrated here.

One thing Molina fails to note is the equation of grill size with penis size. Imagine what could be made of this: 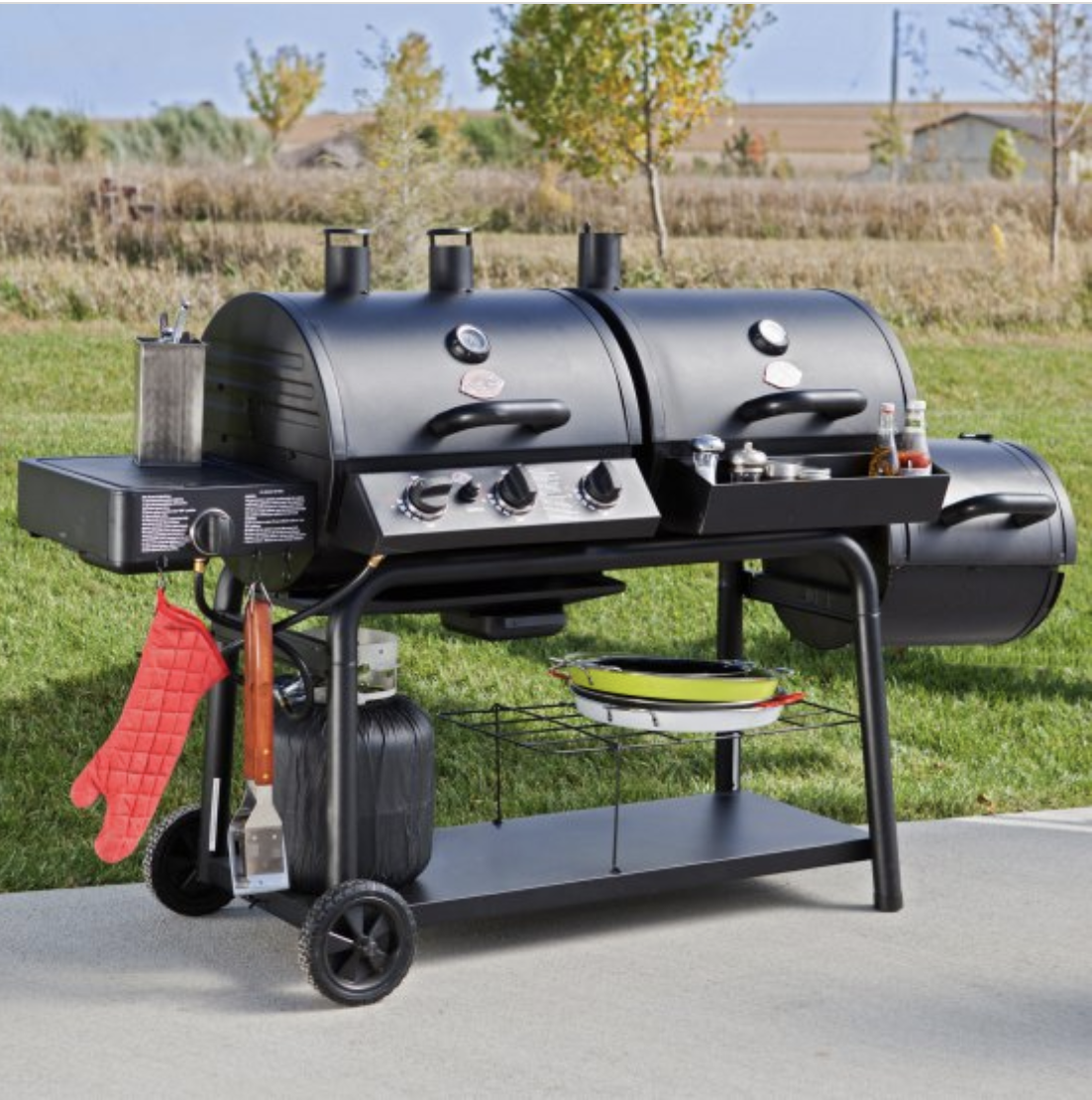